Why not to sow too early

As I'm sure is the case with most gardeners, I'm always impatient to start sowing seeds. As soon as Christmas has passed I start thinking "any day now..", but this is idiocy really, because seeds sown that early will never do well in our climate. I suppose if you have a heated greenhouse it's different, but I don't, so I am trying hard to delay sowing until a sensible time.

The other day I sowed a small container of Baby Leaf Salad seeds, just to test the situation. (Notice the use of a re-purposed large margarine tub as a seed-tray).The seeds germinated OK on a warm windowsill, but without the aid of artificial light they have rapidly gone leggy. 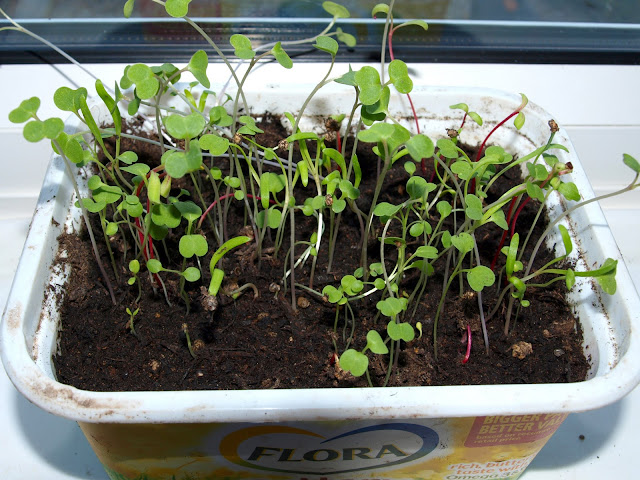 These are from a packet of "Californian Mix" by Suttons. I don't think this batch will ever be strong. Perhaps I'll use them like Mustard and Cress sprouts, or Microgreens... I think my trial has proved that it is still too early to sow, but at least it only cost me a few pennies to find out. Maybe in a couple of weeks time I'll have another go. 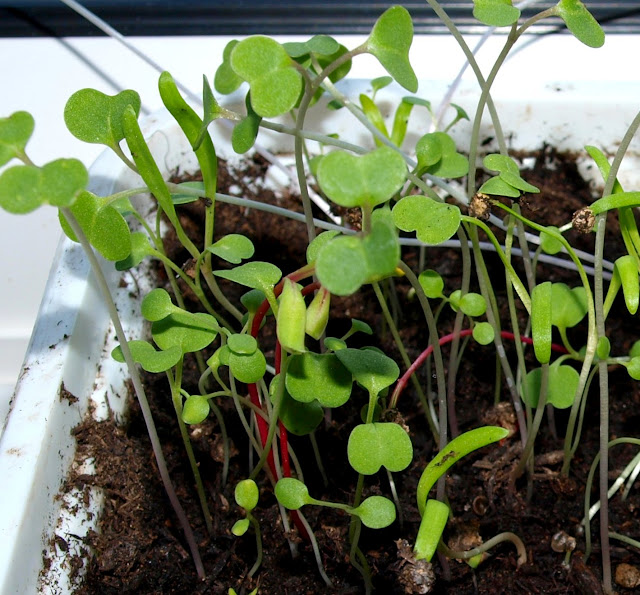 On a related note... The other day when I was sorting through my seeds, planning what to grow this year, I found several half-used packets of things I no longer wanted, or whose viability was suspect, so I tipped out the seeds in the place where I normally put out bread for the birds. Obviously the birds didn't eat all the seeds, because lots of them have germinated:

Looks like mostly Brassicas and Spinach. So does that prove that birds won't eat their greens too, just like some unhealthy humans? Now I bet if I had WANTED them to come up, they wouldn't have germinated at all...
Posted by Mark Willis at 17:30