I'm re-publishing this post, so that I can enter it for Harvest Monday over at Daphne's Dandelions
I haven't had much of a harvest this week, and the reason is shown below...

The temperature here is very cold still: about -10C at night, and hovering just above zero during the day.
The snow at the weekend was sparse and very short-lived here. A centimetre or so that disappeared within 36 hours - not like the start of 2011! 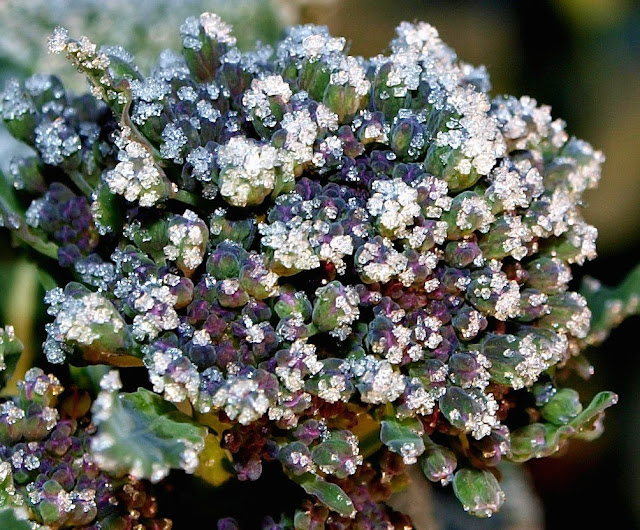 The soil, though thawing now, has been frozen hard, even under the cloches. This is not a time for gardening! Nor is this even a time for digging the plot. The soil would be very hard to dig. It's best to just wait for warmer times and let Nature do its thing. Actually a good hard frost can be a benefit to the soil, because it tends to promote the breaking-down of the bigger clods into smaller "crumbs", which will make a better texture for air and water retention later on.

I don't have many veggies left growing in my garden now, and those that remain are in a state of suspended animation. These photos were taken at the weekend:


I haven't been able to pick any salads or greens for about a week now. This is why:
﻿
﻿


My pots of Wallflowers were in a similar state:

When the temperatures rise again the hardier ones, like the Purple Sprouting Broccoli, may just de-frost and carry on, but I suspect that the softer ones like Endives and Chicory, may not recover.

There was a time when I would have brought my two potted Bay trees into the garage when the weather was like this, but these days they are so big and heavy I couldn't lift them, so they will just have to take their chances out in the open. Actually they will probably be all right as long as we don't get strong winds at the same time as cold temperatures. When cold and wind combine, Bay trees often suffer badly. Their leaves go brown and fall off, and in extreme cases the plants themselves may die.