With Spring being in the offing, I'm turning my attention once more to ways in which I can extend the growing season. Without protection of some kind, it would not be safe to plant things out until late May at the earliest, and since we usually expect to see the first of the Autumn frosts in late September or early October, that doesn't give a lot of room for manoeuvre. Today I'm going to show you the kit that I use for protecting my crops.

A couple of weeks ago I took delivery of a fourth one of those Parasene "Longrow" cloches, so that I now have enough of them to cover one complete raised bed. The package has been sitting in the garage waiting for me to get round to assembling the thing. Last weekend I finally knuckled-down and made the cloche. 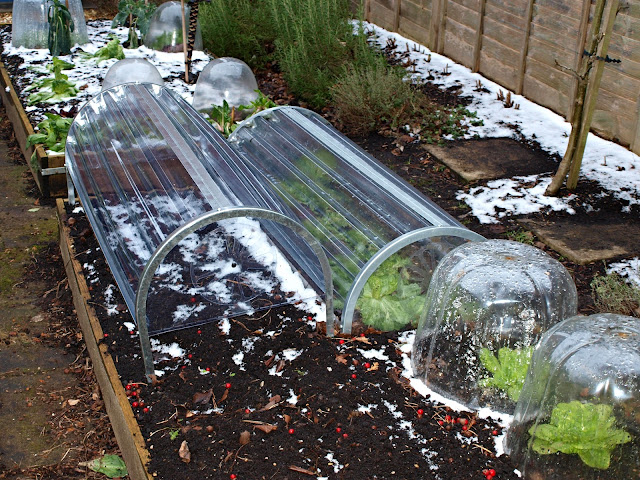 The photo shows the new cloche sitting on the soil surface. You can see the legs which are normally pushed into the soil to keep the thing steady. When I took the photo the soil was frozen too hard to permit this.
I have written about these things before: you may remember my surprise at finding how insubstantial they are. At about £35 each when bought singly, I had expected them to be a superior product, and I must confess to being a little disappointed. The end pieces in particular are very flimsy indeed, and are likely to be the weak point. Nevertheless, I think that the cloches are a necessary addition to my "box of tricks" if I want to extend the growing season by a few weeks at each end.
Just in case you are in any doubt about this, a cloche like this serves two purposes: it protects young/small plants from some of the worst aspects of the weather (snow, frost, wind etc), but it also protects them from animals - which in my case is probably the greatest attraction of them. In the past I have sometimes suffered a lot from the night-time excavations of cats and foxes, frequently wreaking havoc upon a batch of newly emerged seedlings. These cloches have already helped me a lot in this respect. I shall be using them to protect some rows of parsnips and beetroot just as soon as the weather warms up sufficiently for sowing...

Another point to note by the way, is that cloches like this do not raise the temperature unless there is sun shining on them. In fact that is definitely something you need to be aware of in the Spring. When there is bright sunshine the temperature inside one of those cloches can easily get too high for delicate little seedlings, so you need to be careful to provide adequate ventilation. Mine have little opening and closing vents in the end-panels for this purpose.

In the top photo you can also see some of my bell-cloches. The ones on the right of the picture are covering a couple of lettuces. I have been pleased with this type of cloche. They were good value at 3 for £10, and they are nice and tall, so you can keep them in place even when a plant begins to grow quite big. Another advantage of them is that they are stackable, so they take up much less space when not in use. The same cannot be said for the long ones, unfortunately. Last Summer I had to keep them arranged around the edge of the garden because I have nowhere else to put them - though they were at one stage pressed into use as windbreaks to protect the young climbing beans... 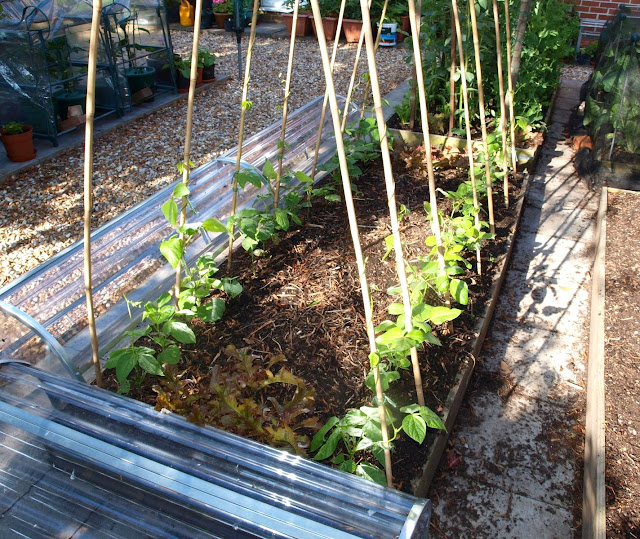 ﻿
At this time of year, my plastic mini-greenhouses start to come into the limelight. 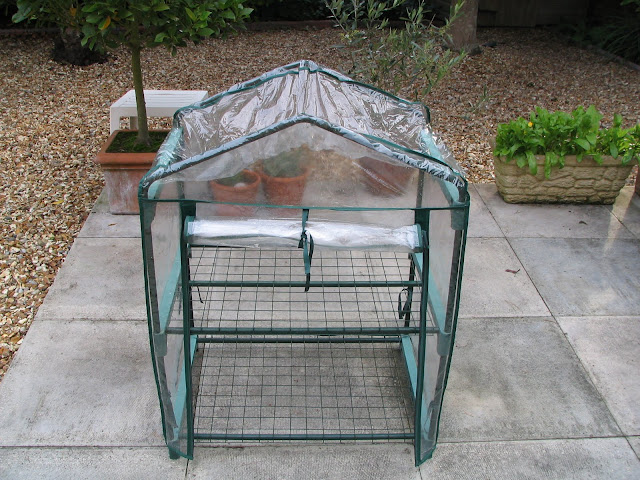 When I start sowing seeds they will be used as part of my hardening-off procedure. The little plants will reside in these greenhouses for a while (perhaps being brought indoors at night if the weather is still cold), until such time as I judge them to be strong enough to fend for themselves in the open air. I find these greenhouses incredibly useful - I couldn't manage without them now - and they are also very good value for money at about £10 to £12 each.
In similar vein is the coldframe. I use this for hardening-off tender plants, but I also use it as a place to over-winter my herbs. Mine is made of aluminium with glass panels, but with hindsight I think polycarbonate panels would be better - they are lighter and safer (especially if you have young children). 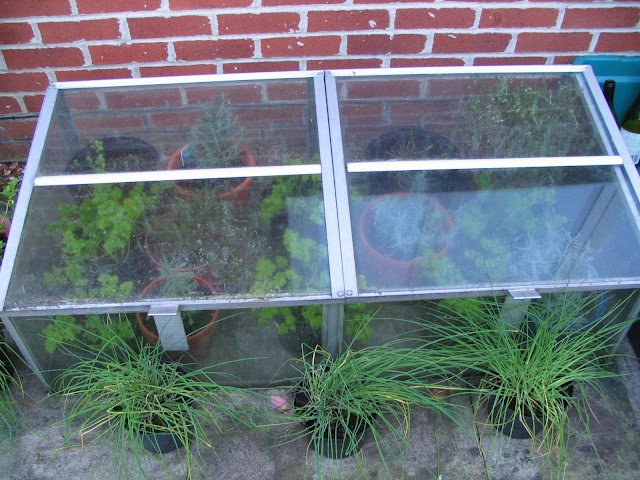 I know that lots of people make extensive use of horticultural fleece, but I'm not a great fan of it. I have found it to have the following disadvantages: 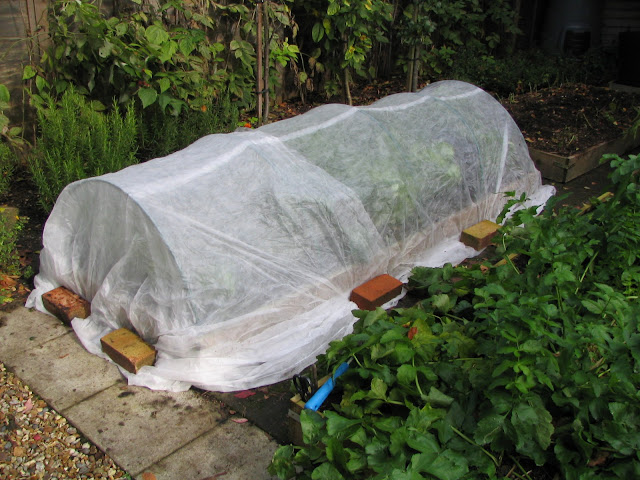 So those are the options open to me at present. Now here's my Wishlist
Posted by Mark Willis at 17:30