We spent last weekend away from home, on a little break, getting away from the usual routine of shopping, housework and general "admin". We went first to Stratford on Avon, which is less than two hours' drive away for us. As I'm sure most of you know, Stratford is best known as the home town of the famous William Shakespeare. Here he is, commemorated in bronze... 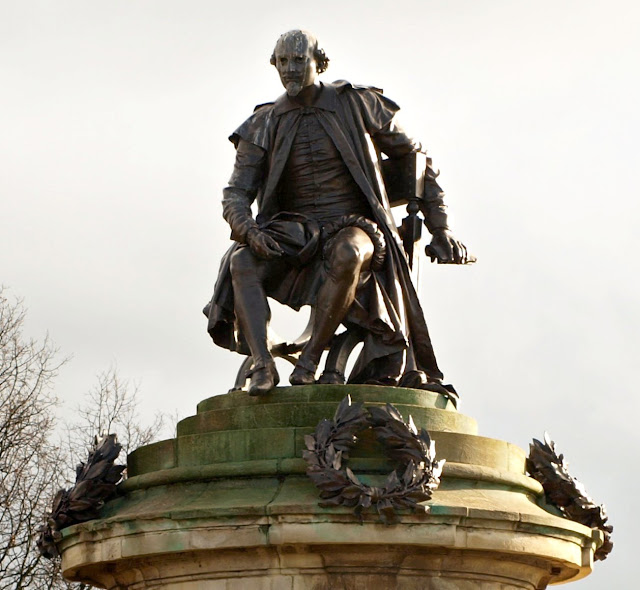 We chose this as our first stop primarily because Jane had won a night's accommodation in the Swans Nest hotel, a solid red-brick 17th century edifice situated right next to the river Avon, in a very convenient position. 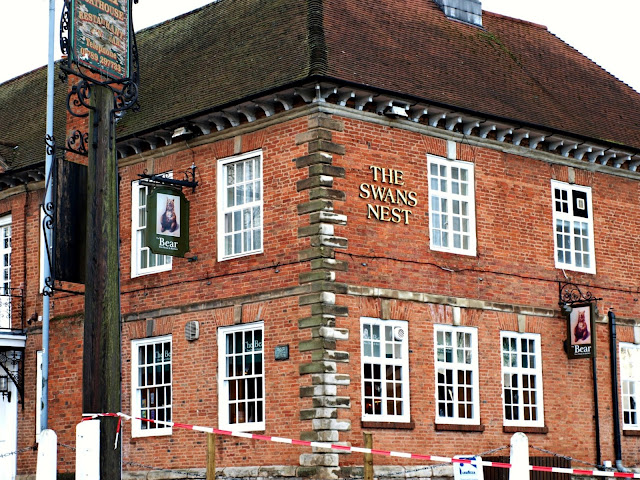 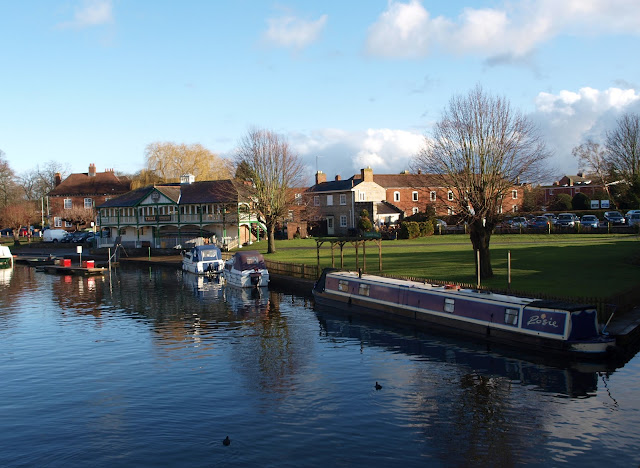 The hotel is right next to the southern end of the impressive 14-arch Clopton Bridge, allegedly built in 1480 on the site of an earlier wooden bridge which had been built to "upgrade" the ford which originally gave Stratford its name. 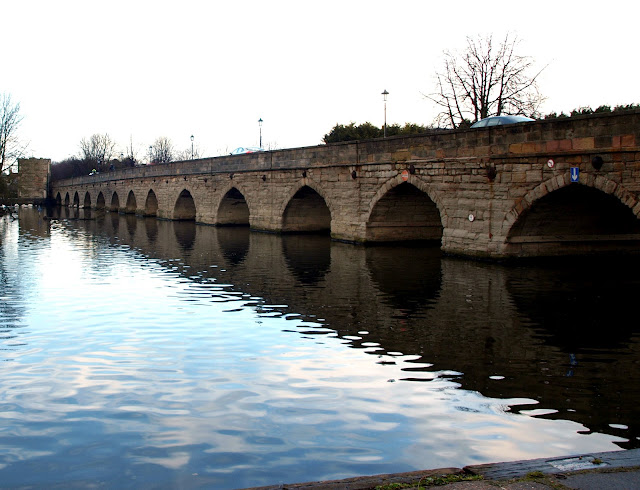 Directly opposite the hotel, a five-minute walk away, is what most visitors to Stratford come to see - the new Royal Shakespeare Theatre, completed only in 2010. 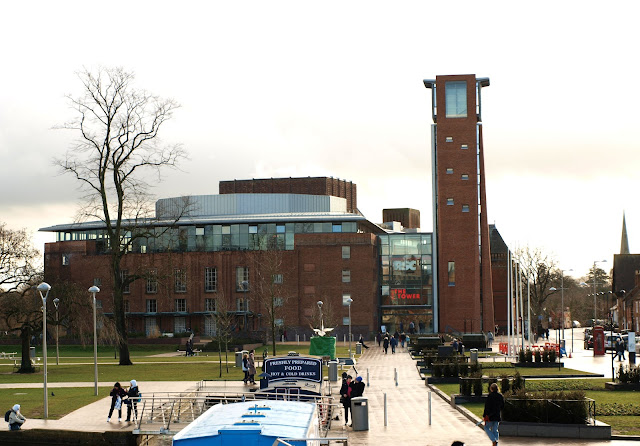 We didn't do this, but apparently you can up inside that tower to a viewing gallery from which there are spectacular views of the town. On another occasion we also might have opted to see a play, but on this occasion that was not the plan.

Right next to the theatre is the canal basin (terminus) of the Stratford on Avon canal, which runs for only 25 miles, connecting the Grand Union Canal at Birmingham to the River Avon at Stratford. 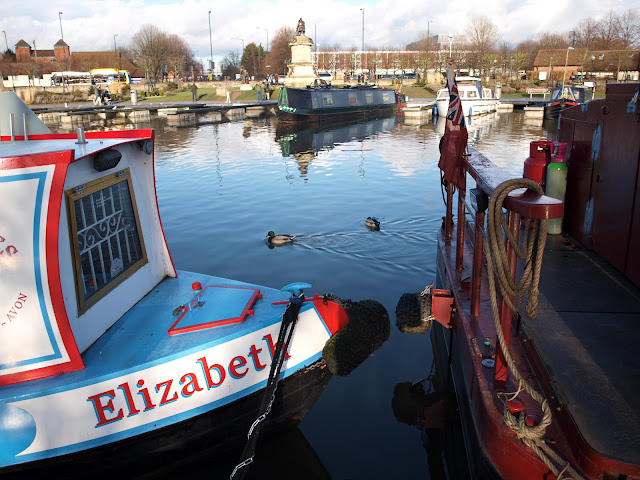 Surprisingly (considering the hilly nature of much of our country), England has an extensive canal network, which was established in the late 18th century, when the Industrial Revoloution demanded a means of transporting raw materials and finished goods in unprecedented quantities. At that time the road system was very poor, and the horse-drawn wagon was a very inefficient way of moving goods. The canals changed everything, permitting the movement of bulk goods in much shorter timescales. Our canals were never very wide, and a special type of boat was built for them. We call them "Narrow boats" - for obvious reasons. 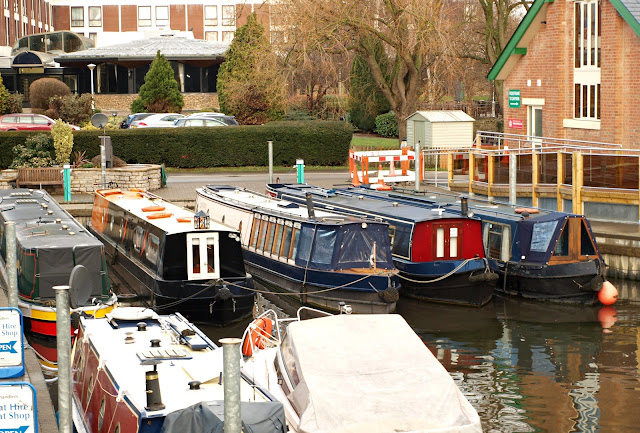 These barges were originally towed by horses which trudged along the "towpaths". These days the boats have mostly been converted for leisure use, being fitted out with motors and sleeping accomodation etc. A canal-based holiday is still a slow-moving option, because of the large number of locks that need to be negotiated, For instance, on the 25-miles-long Stratford canal there are 54 locks! 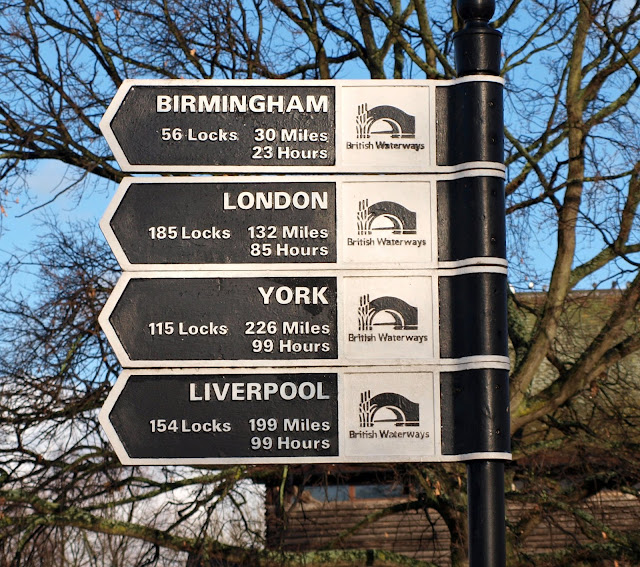 Despite the huge investment that went into constructing the canal network, its usefulness was very brief, simply because the railway soon replaced the canal as the main means of transport - and was able to move materials at a speed which far surpassed that of the poor old horse.

Our opportunities for tourism were strictly limited this time,  for a variety of reasons, not least of which was the weather. In the early afternoon we had some amazingly heavy rain - the sort we call a "tropical downpour". Just look at the colour of the sky in this next photo, taken looking right into the sun! 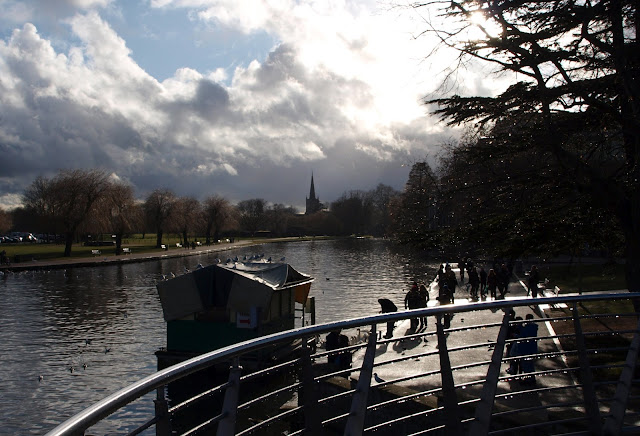 Anyway, our primary objective was to enjoy some nice food and wine, which we duly did. We ate in the Bistrot Pierre, which although not officially the hotel restaurant, is effectively the hotel restaurant. It is actually inside the hotel building, and its management have some sort of business relationship with the Macdonalds Group who run the hotel. We had what we agreed was a competent but unmemorable meal, so I'm not proposing to write any more about it. On the following day we drove down to the area of Witney, just west of Oxford, travelling through the Cotswold hills. I shall be writing a post about this other half of the weekend soon...

To end this post, here is a photo that proves convincingly that Geese cannot read: 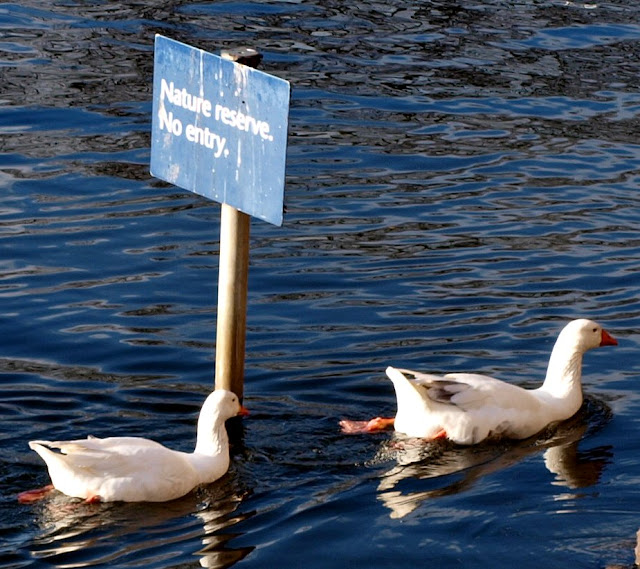