As most of you will be aware, I don't own an orchard. I have just two fruit trees (used to have 3, but Victoria Plum passed away last year). Both of mine - one apple "Scrumptious" and one pear "Conference" -are grown as Minarettes. That's to say the are not very tall (about 8 feet?) and very slim. This type of tree can be grown at a spacing of only 3 feet from its neighbours. You could even grow one in a large container if you wanted to.

My two are positioned near a fence made of larch-lap fencing, against which I have Raspberries growing. This location is the best I have, since it faces South-East and gets a fair bit of sun.

The metal poles you can see behind the trees are parts of two old rotary clothes-driers, which I have re-purposed as stakes to keep some of the Raspberries under control. Perhaps you can also see that the trees are tied to wooden stakes. They are 5-foot stakes, I think, with about 1 foot under ground. When I put the trees in they looked plenty big enough, but in retrospect 8-foot stakes would have been better, since the slender Minarettes benefit from support all the way to the top. The trees put up some very enthusiastic "Leaders" (main growing points), and I have had to keep chopping them back.

A Minarette is supposed to have lots of very short branches radiating from the main trunk, and no really big ones at all. I have to be honest and say that my trees have produced fewer shoots low down on their trunks than I had expected, and a lot more growth up top. Last year the pear put on lots of new growth and looked healthy throughout. It went on to produce a total of 11 fruits. Not a lot, you may say, but OMG they were nice! The apple tree on the other hand did very badly indeed. It suffered from Bitter Pit, which is an ailment associated with being unable to absorb enough calcium during dry conditions. Adding more calcium doesn't help, by the way, you just need to add more water. That tree came within an inch of its life last year: I VERY nearly dug it up, but I decided to give it one more year to redeem itself, and we have made a pact between us: I will keep it well-watered if it promises to give me at least SOME edible fruit!

Last Tuesday I had a day off work, so I did my Winter pruning. The idea is to keep the side-shoots ("Fruiting Spurs") short and compact - approximately 6 - 8 inches in total. In my humble opinion this cluster of spurs on the apple tree looks about right (maybe even a tad too long?) 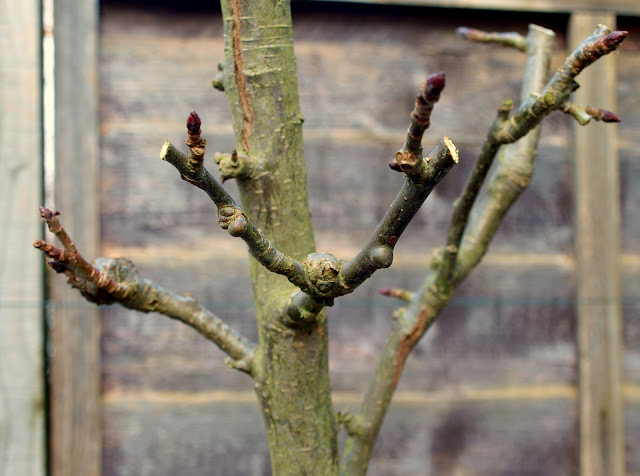 Using my secateurs and long-handled loppers, I cut back any straggly spurs to just above a bud, like this: 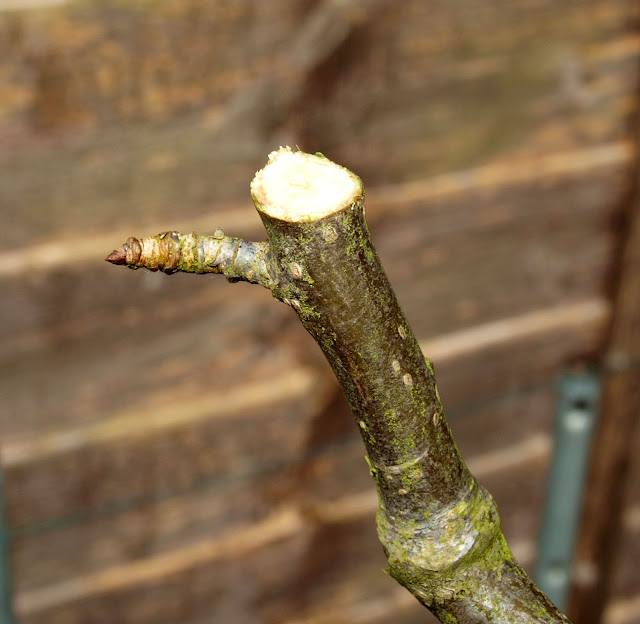 ﻿I thought maybe a silhouette view would give a decent impression of the end result. Yes, viewed from here, some of the spurs at the top left do seem too long still... Anyway, what the hell? Just look at the colour of that sky! And it's only February. 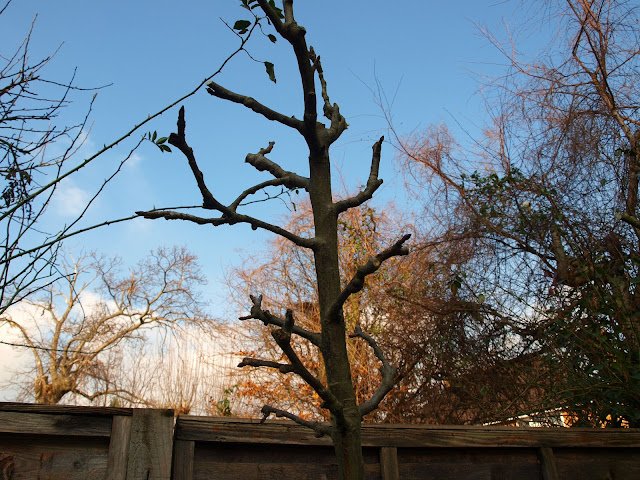