It is no secret that I am friendly with Stephen Shirley, who runs Victoriana Nursery Gardens, situated in Challock near Ashford in Kent, (and sponsors the UK Veg Gardeners forum, of which I am a member). One of the reasons for our friendship is a mutual love of growing chillis. As an amateur gardener with strictly limited space available, I can only grow a few chillis, but Stephen is a professional and grows them commercially. He is also a member of the Chile Pepper Institute of New Mexico State University, so I suspect here is not much about chillis that he doesn't know! Each year for the last few years, Victoriana plays host to the Challock Chilli Fest, at which visitors can see and taste 150+ varieties of chilli. This year the event takes place on 1st and 2nd October.


When I visited the Chilli Fest last year (reviewed HERE), Stephen told me about a new chilli variety that he has been breeding. He even gave me a little taste of one of its fruits (a special privilege!). There are literally hundreds of chilli varieties available, and since chillis are notoriously promiscuous, many more are appearing all the time. Some of the new varieties are produced purely fortuitously by the random cross-pollination of nearby plants, but this doesn't lead to consistently reproduceable plants. If you want something consistent you have to rear it in controlled conditions, which will prevent the flowers of one variety being pollinated with another unless you want it to be.


Stephen tells me that the parents of his new chilli, which he has called the "Challock Chilli", are "Birds Eye Baby" and "Jalapeno". 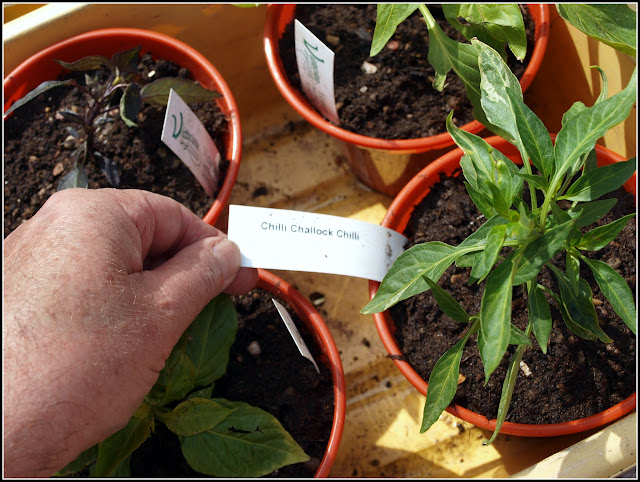 Obviously, Stephen is not going to tell me too much about how he rears his chillis, (nor would I expect him to) but I'm sure he will be taking steps to look after it, with a view to increasing his stocks - possibly being able to sell seeds for it in due course. This year he has only very limited stock of this type, and they are available only to personal callers at the nursery (i.e. not by mail order).


I consider myself hugely privileged to have been asked to assist with trialling this new variety and I now have not one, but TWO of them to grow in my garden. I have naturally consented to observe very carefully how they perform, and report back. Right now they are just settling in and getting to know their neighbours (it's a pretty heavily-populated neighbourhood, if you know what I mean...), but early indications are good. Both plants look strong and healthy, and as I potted them up I saw that they had very strong root systems. 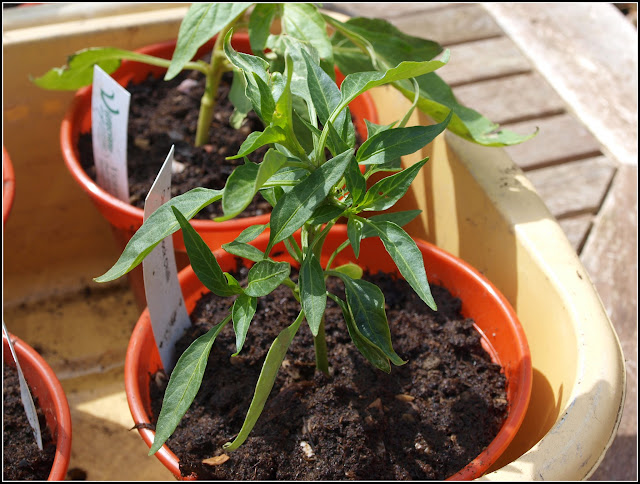 Thinking back to last October, my recollection (which may of course be totally false!) of the new type is of medium-sized fruits, with fairly thick flesh; a deep red - almost brownish - colour, and a very fruity flavour. To be honest I don't remember much about the level of heat it had, but I'll let you know in due course!


By the way, should you be interested in such things, please note that the forum called UK Veg Gardeners has a special interest group called "Chilli-lovers". If you are new to this fascinating hobby,  and want to find out more about it, we would love to have you join! 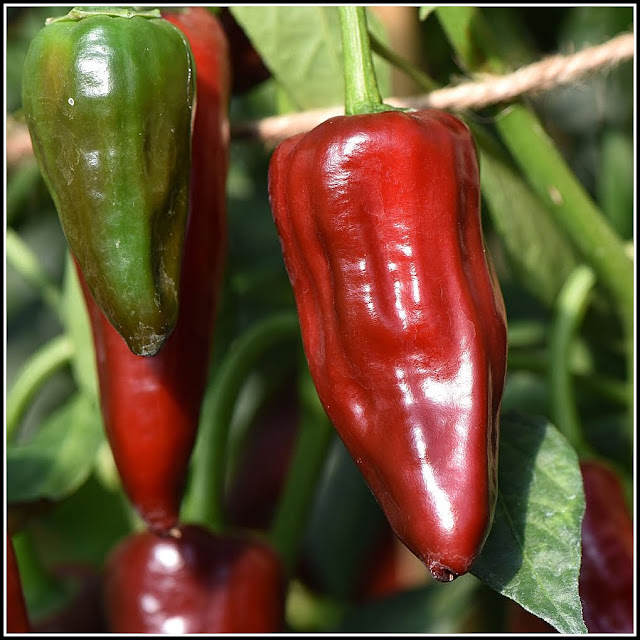