Some of my current food heroes hail from the Middle East - Yotam Ottolenghi, Sami Tamimi, Sabrina Ghayour etc - and their work (particularly Sabrina's recent books "Persiana" and "Sirocco") often inspire me to cook in their style. I seldom use a recipe exactly as per one of the books, but I take inspiration from a recipe and adapt it. This is one of those. 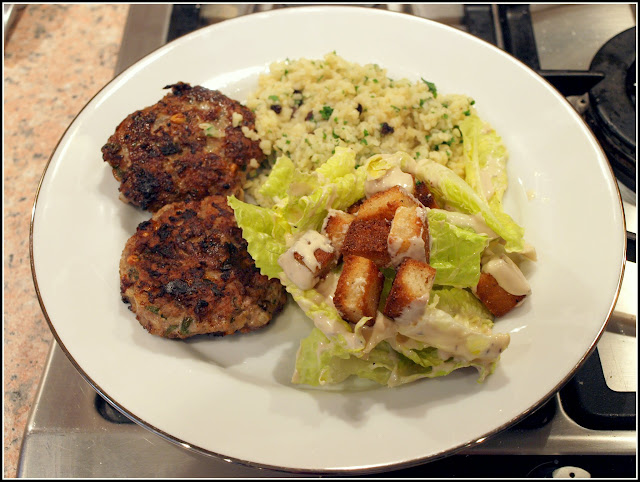 In her book "Persiana", Sabrina Ghayour gives a recipe for Lamb and Pistachio Patties - Fistikli Kebap - (page 127), and my patties are loosely based on this.


Toasting the Pine-nuts and Cumin seeds is really worth the little extra effort, because it brings out the flavour a lot. All it needs is a minute or so in a hot dry frying-pan, being very careful not to allow the seeds / nuts to burn. With the Cumin seeds you know when they are ready when the begin to crackle and jump in the pan (and of course there will be a lovely strong aroma!).


Following Sabrina's advice I put all the ingredients in a large bowl and "massaged" them very thoroughly, with my hands. This not only makes sure that the ingredients are properly mixed, but it also breaks down the fibres of the meat to give it a finer texture. Once massaged, the Lamb mixture was formed into patties (or burgers?) and left in the fridge for a few hours to marinate and firm-up.


The 500g pack of meat was too much for us to eat in one meal, so I made it into eight patties, cooked them all but put four aside to freeze for a later occasion. I fried the patties in vegetable oil, over low- to medium heat. Time taken for each batch was about 25 minutes, flipping the patties over a couple of times to ensure they were fully cooked through and nicely browned. 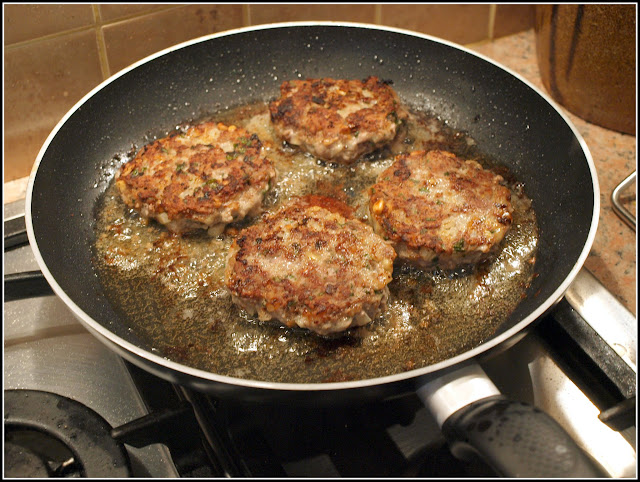 To go with the patties I made what I have named "Cleopatra" salad. It's a take on Caesar salad, of course, made with crunchy Cos (Romaine) lettuce. I don't eat seafood, so the traditional Caesar dressing made with anchovies is not for me. Instead I used inspiration from Yotam Ottolenghi to make a salad with a dressing based on tahini (sesame paste). In Ottolenghi's book "Jerusalem" (co-written with Sami Tamimi) you will find a recipe for a tahini dressing on page 36. Again, I didn't use the recipe exactly, but made my own variation of it. Specifically, I left out the garlic, and added-in some za'atar. I also fried some cubes of bread in olive oil flavoured with Oregano to make croutons. This is how it looked when finished:


To complete my meal, I made up some bulgur, using chicken stock, and then when it was cooked I stirred in a big handful of chopped Parsley and about 25g of currants, giving the dish a bit more interest and hopefully adding a bit to the Middle Eastern theme. 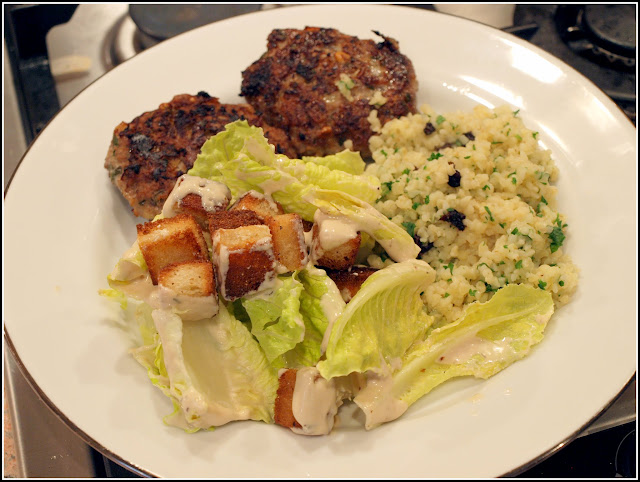 The Mint for the patties and the Parsley for in the bulgur were both home-grown, which is satisfying. 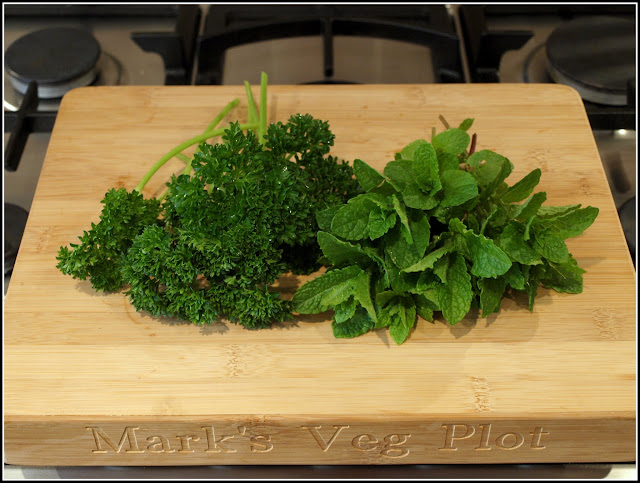 Jane and I both loved this meal. It's tasty, well-balanced, and full of different flavours and textures. I particularly liked the additional crunch delivered by the Pine-nuts in the patties, and the silky savoury tahini dressing on the salad. The bonus is that we now have four more patties in the freezer that only need briefly warming up in order to form the basis of another meal!
Posted by Mark Willis at 12:00