Some decent weather at last!

After a cold, gloomy April, the first few days of May have been a welcome contrast. Daytime temperatures have been about 10 degrees warmer than last week (that's Celsius, too, not Fahrenheit!), and although the nights have not been warm at least we have had no more frost. I'm still bringing my tomato and chilli plants indoors each evening, but during the daytime I have an unfamiliar challenge - stopping them getting too hot! 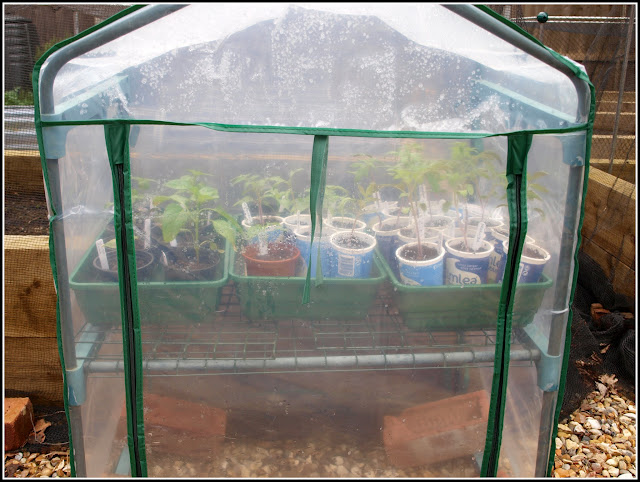 As you know, I have some little plastic mini-greenhouses, in which I normally keep my seedlings during the day in Spring-time, but they do get very hot very quickly when in direct sunlight and unless you are careful the plants could easily suffer. On Tuesday, for instance, we went shopping during the morning and I left the greenhouses partially closed because the air temperature was only about 10C. When we got home at about 1130 the temperature in one of the greenhouses was 44C. The plants inside it were chillis and tomatoes, which like warm conditions, so they don't seem to have come to much harm, but I reckon if I had left them an hour longer they would probably have died. Less heat-tolerant plants would not survive that sort of temperature.
The rising temperatures have spurred into life some of the seeds I sowed last month and at the end of March, like these Spring Onions: 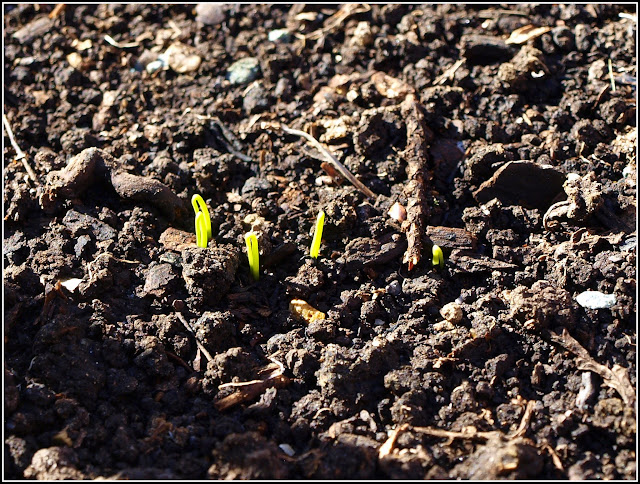 I sowed three short (1.2m) rows of Spring Onions on April 9th, protected by a cloche, and for the past couple of weeks I have been anxiously scanning the soil for signs of their arrival. Well, there's no doubting it - they're up now. 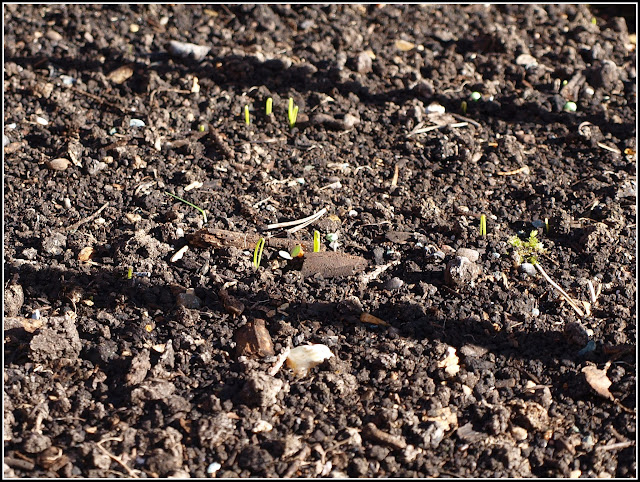 In the past I have not had a lot of success with Spring Onions (they seldom reach a good size), but last year I grew some whose seeds I had bought in France, and they did much better, so I have sown the rest of the pack this year. They are "Rouge Commun" by Vilmorin seeds. I think perhaps one of the keys to success with Spring Onions is ensuring they get enough light. I have often tried to squeeze them in amongst other salad plants, which have swamped them a bit, so this year I'm trying hard to avoid this.
I am also pleased to report that my beans have begun to germinate. As described a couple of weeks back, I sowed seeds for five different types of bean. The first ones to show through are the Runners - "Tenderstar" and "Streamline". 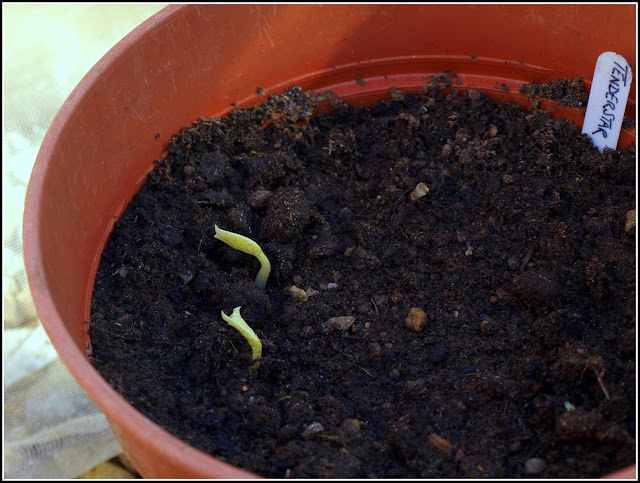 My reason for starting off the beans in pots is that I can protect them from frost better than if they were out in the open - in other words I can bring them indoors if necessary. It's hard to predict with any degree of certainty when our last frost date is likely to be, but it will probably be mid- to late-May. If I were to delay sowing my beans until the danger of frost had passed, my harvest would be about a month later - and of course, like all gardeners, I'm keen to get harvesting as soon as I can!


Next on the list of recent germinators are my cucumbers. In true Mark's Veg Plot style, I have hedged my bets by sowing three different varieties - "Diva", "Passandra" and "Mini Munch" - plus a couple of Cucamelons (aka Mexican Gherkin). I'm not sure about the latter, but last year I saw many people writing about having grown them, so I thought I ought to see for myself what they're like. More to the point, the lovely people at Marshalls sent me a pack of seeds to try, and it seems churlish not to give them a go. 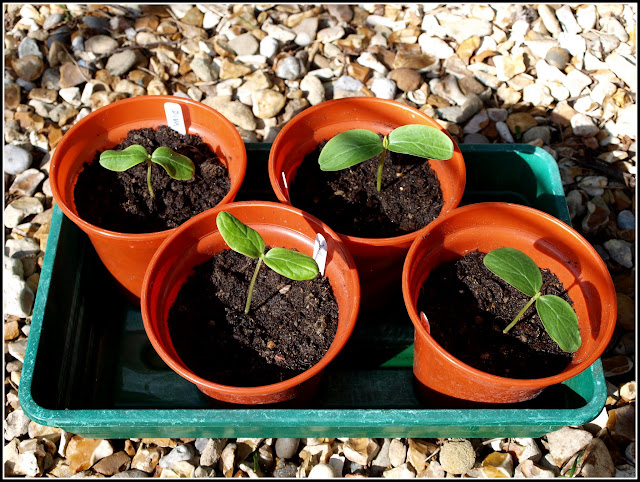 The cucumbers are understandably very small still, but then I don't plan to plant them out until at least the first week of June, and even then it will be under cloches. 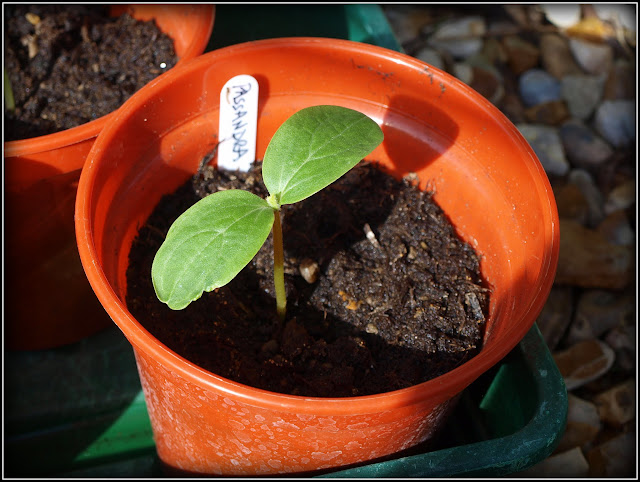 Yesterday I mentioned that I had begun to see butterflies in my garden, mostly Brimstones. Well, today I spotted this tiny blue one resting on a potato leaf.  Having looked this up, I reckon it is a female Small Blue - apparently the UK's smallest butterfly. 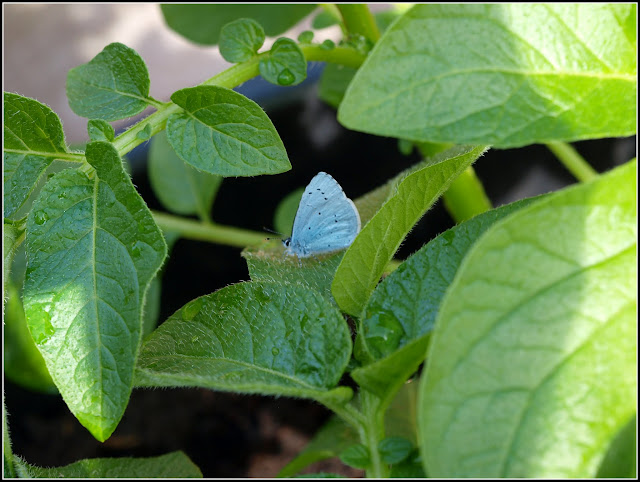