I have now moved my tomato plants to their final homes. They couldn't have remained much longer in their little 6" pots without getting root-bound and starved of nutrients.


The big cordon-type ones are now in 40cm containers - those ones with a water reservoir in the base. For those of you who don't know this, a cordon-grown tomato plant is one that is grown tall and thin, which is achieved by training the plant up a cane or string and by pinching-out its sideshoots. I have provided mine with 5-foot canes. 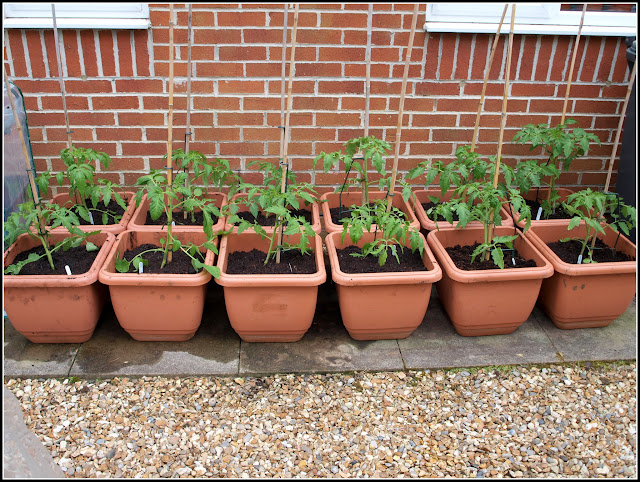 I decided that since I had 12 of those nice big 40cm pots I would grow 12 cordon tomatoes. All the surplus ones (there are not many this year) will be given away to friends.


Ferline is a blight-resistant variety, and a heavy cropper, so I grow this one every year now. It has big red, tasty fruits. I like it so much that I'm growing two plants of this type.

It's interesting to see how different the plants look. This is "Larisa", (seeds from Eddy, in Belgium)currently a rather delicate-looking plant, with deeply-indented leaves. In due course I hope it will deliver some big pinkish-red fruits. This is now also a favourite, but one that I have found hard to grow successfully.

This is "Stupice" (seeds from Dominika in the Czech Republic), which is a potato-leafed variety with medium-sized red fruits. It is allegedly very early maturing, which is attractive to me, because it might deliver its crop before any blight comes along.

By rights I should have some pretty good tomatoes this year, because the growing medium in those pots is a very rich mixture. It includes some of the "Sylvagrow" peat-free compost, some of the Norfolk loam (yes, that 1000-kg bag I bought earlier this year is still going), and tons of really rich home-made compost. In each pot I also put a big handful of pelleted chicken manure and one of Growmore general-purpose fertiliser.


Since the home-made compost has lots of worms in it, I'm anticipating that the local badgers will take an interest in my plantings, so I have erected a barrier to dissuade them from any opportunistic snuffling: 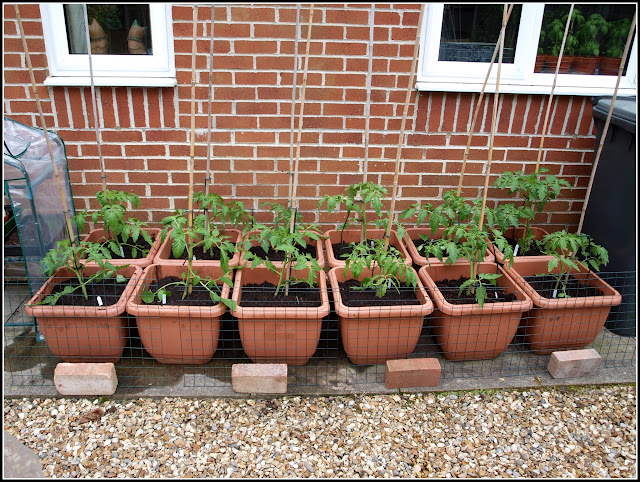 This barrier is made of some of the ubiquitous wire shelves from the plastic mini-greenhouses, held in place with bricks. What useful things those shelves are! Whether this barrier will be effective remains to be seen... 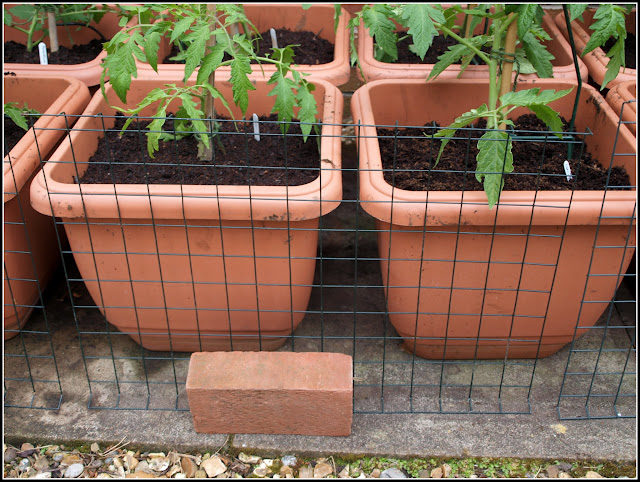 In addition to the cordon varieties, I have four plants of bush varieties. They are Grushkova (seeds from Alex in Scotland), Montello (seeds provided by Marshalls), and Maskotka x 2. Again, Maskotka is one of my old stalwarts and I like it so much that I think it deserves more than one plant. 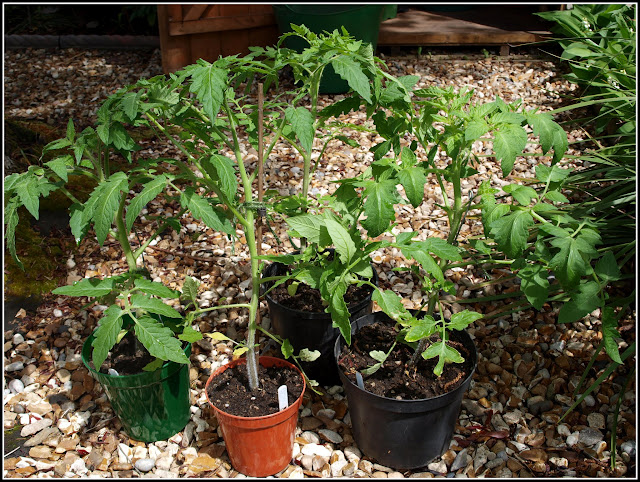 These four have gone into big containers too, though ones which are not quite as good as the ones seen above. For a start, they are not of the self-watering type. The bush varieties don't grow so tall, so I have only provided these ones with short canes, and I will not be pinching-out their sideshoots. 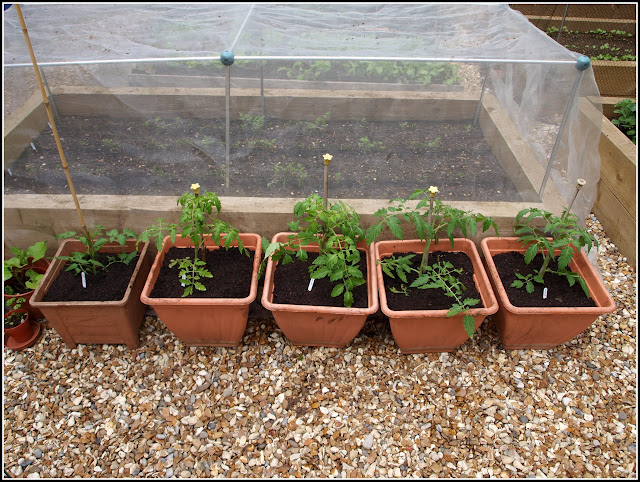 After planting these 16 tomato plants, I was still left with six more, which were intended as spares. However, I decided to make a late addition to my line-up. I added "Supersweet 100", grown from seeds kindly given to me by Elza in Holland. This is a cordon variety, but the best I could do for it was to provide a container like the one for the bush varieties, except with a 5-foot cane. It is seen at the left in the photo above.


For the time being, the bush tomatoes are sitting alongside the bed in which I have carrots (covered in Enviromesh, you'll note). 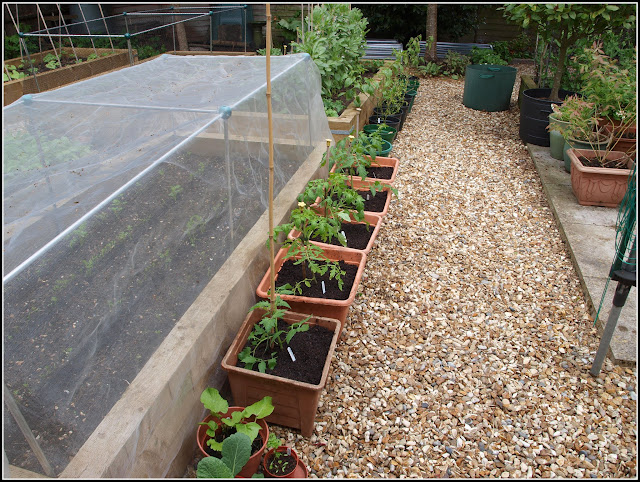 Later on they will be shifted elsewhere (probably up against the house), because I will need that spot for more chillis.


Planting-up the tomatoes is one of the biggest jobs of the gardening year for me, and quite hard work, so I'm glad it's done. However, if things go according to plan, it will have been one of the most rewarding tasks too. There are few things more appealing to a vegetable gardener than a basket of ripe home-grown tomatoes! 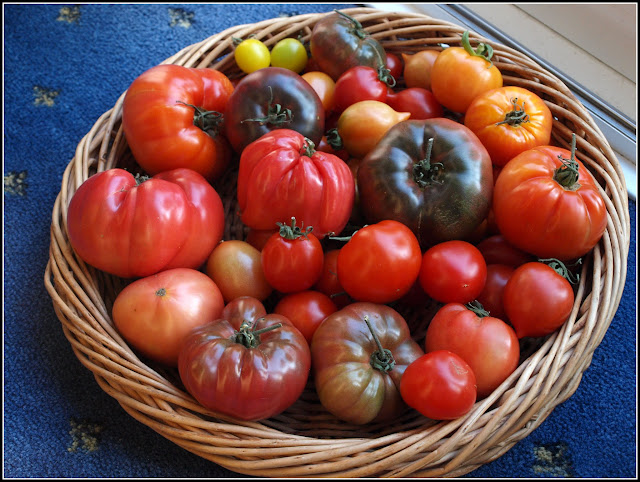