Here's an update on how my container-grown potatoes are faring.


Unsurprisingly, the ones under cover are the furthest advanced: 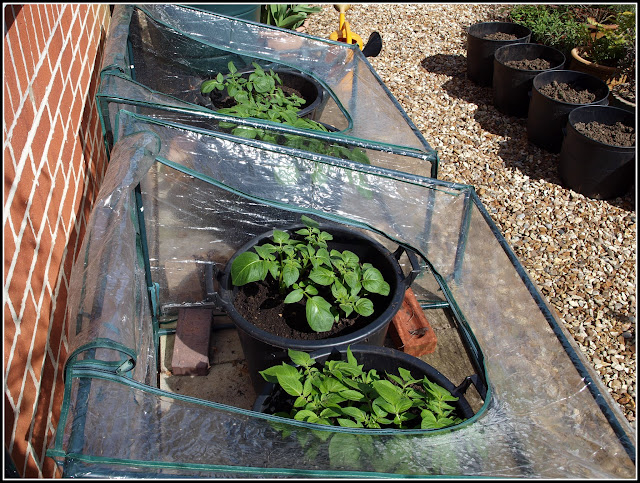 Curiously, the Second Early varieties are a lot bigger than the First Early ones which were planted a week earlier. This is "Lady Christl" (First Early). One of the plants (bottom right) is particularly small or slow to develop:


The potatoes that have not benefitted from protection are a long way behind the protected ones. This is predictable and deliberate, because I want to be harvesting new potatoes over as long a period as possible.


This is another pot of 2 x "Nicola", with the shoots just a couple of inches tall. I'll be earthing them up in the next couple of days. They were planted 8 days after the other two of the same variety. Compare this photo with the previous one and you'll see the effect of providing protection.

Meanwhile, the other Second Earlies (the later-planted "Charlotte") and Early Maincrops ("Pink Fir Apple") are only just showing through:


April has been a strange month as far as the weather is concerned, with temperatures much colder than average for the time of year, lots of wind, and surprisingly little rainfall. In conditions like these it is particularly important to water container-grown potato plants frequently. They will not do well if their soil is too dry.


Things are going pretty much according to plan in the potato department, and I think we're on track to be harvesting the first tubers in early June. The first week of June is my target.
Posted by Mark Willis at 12:00