Lettuce is one of those plants that has sometimes had a bad press. It is often perceived as dull and boring, but it really isn't. There are loads of different varieties, with many different colours, shapes and textures to amuse the eye, and let us not forget that Lettuce is usually the heart of most good salads! Even if you didn't want to eat them, many Lettuces are hugely ornamental and look just as good as flowers in the garden border. 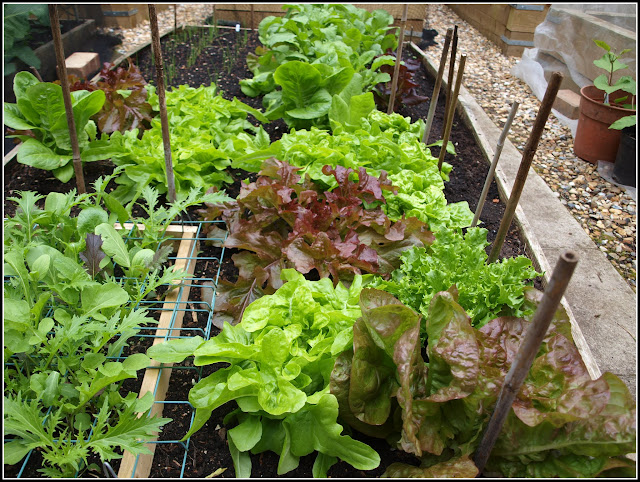 I have grown lots of different Lettuce varieties in my time, and as with other crops I have identified a few favourites that I grow again and again, but I'm always eager to try some new ones. Over the last couple of years I have exchanged seeds a couple of times with a friend called Dominka in the Czech Republic and the Lettuce seeds she has given me are amongst the best I have ever grown. They just seem to like the conditions in my garden. The ones she has sent me are Cervanek, Devin, Dubacek and Redin. Here are photos of those for you:

One of my favourite Lettuces is Fristina, a deeply-serrated green one. I think one of the reasons I like it is that it reminds me of Curly Endives (which I love, but struggle to grow in the Spring / Summer).


This is Little Gem, one of the most widely-encountered Lettuces in our country. You see millions of them on sale in the supermarkets, but it's still a very popular one with home gardeners - me included.


Little Gem is a smallish Cos or Romaine type. Its outer leaves are usually discarded in favour of the crunchy inner ones. The specimen seen in my photo is an immature one, and the heart has not yet developed.

This next one is Tom Thumb, a very compact (small!) variety, well suited to small gardens like mine. It is one of those grown from seeds kindly sent to me for review by Marshalls. It is officially a Butterhead variety, but the heart is very dense, and the leaves are quite robust - almost like Little Gem, actually.


In the photo of Tom Thumb, above, you can also see a couple of seedlings of Ice Queen, which have been grown from seeds gifted to me by my chilli-growing friend Chris. I have yet to harvest any mature ones of this variety, but they look promising.

This one is "Yugoslavian Red", grown from seeds sent to me by another new friend - Elza, originally from Bosnia, but now living in the Netherlands. Again, I haven't had any mature ones yet, but it looks like a very handsome Lettuce.


If you want dramatic looks in your Lettuce, try this one - Amaze. It is a red Gem type, something like Little Gem. It has deep red outer leaves, but the inner ones are light green, verging on yellow.


By the way, all the Lettuces pictured above are growing in my garden right now. Only a few of each or course. With Lettuce there is only so much you can eat, and it doesn't lend itself to preservation, so it makes sense to sow little and often. That way you always have some available, without having a glut. 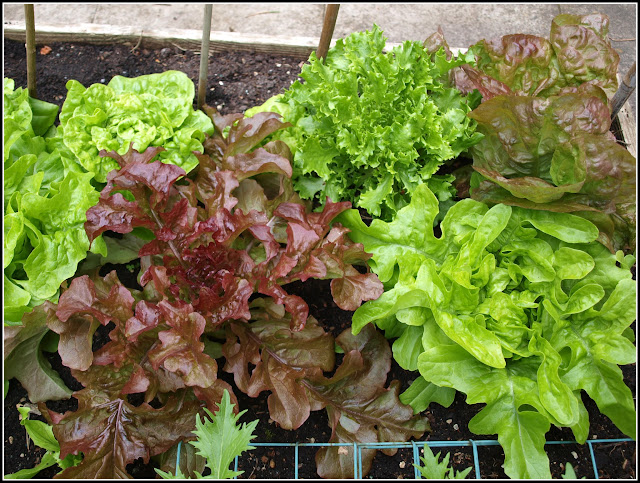 I also want to make mention here of another favourite which I am currently not growing - Webbs Wonderful, a big Iceberg-type Lettuce. This one has a special significance for me, because it is the one that my Dad always liked to grow. Its size is a problem for me; with its outer leaves on it's about two feet across, so I can never squeeze many into my little plot.


Of course, the outer leaves are always removed, leaving the dense crunchy heart inside.

As you will have gathered, I like to grow plants from seeds given to me by friends, sometimes as part of an informal seed-swap. I'm not really sure why, but it's something to do with the "social" part of  using the Social Media, of which blogging is a significant element.
Posted by Mark Willis at 12:00