Years ago, Jane and I lived for several years in Hong Kong, and we soon developed a love for Cantonese cuisine. One of our favourite Chinese foods is Char Siu, pork meat flavoured with fragrant spices and cooked either in an oven or over a barbecue until the meat is tender and its exterior is dark and sticky. The Char Siu is then used in a variety of ways, for instance to form the stuffing for little buns called Char Siu Bau, or as an ingredient in dishes based on rice or noodles. 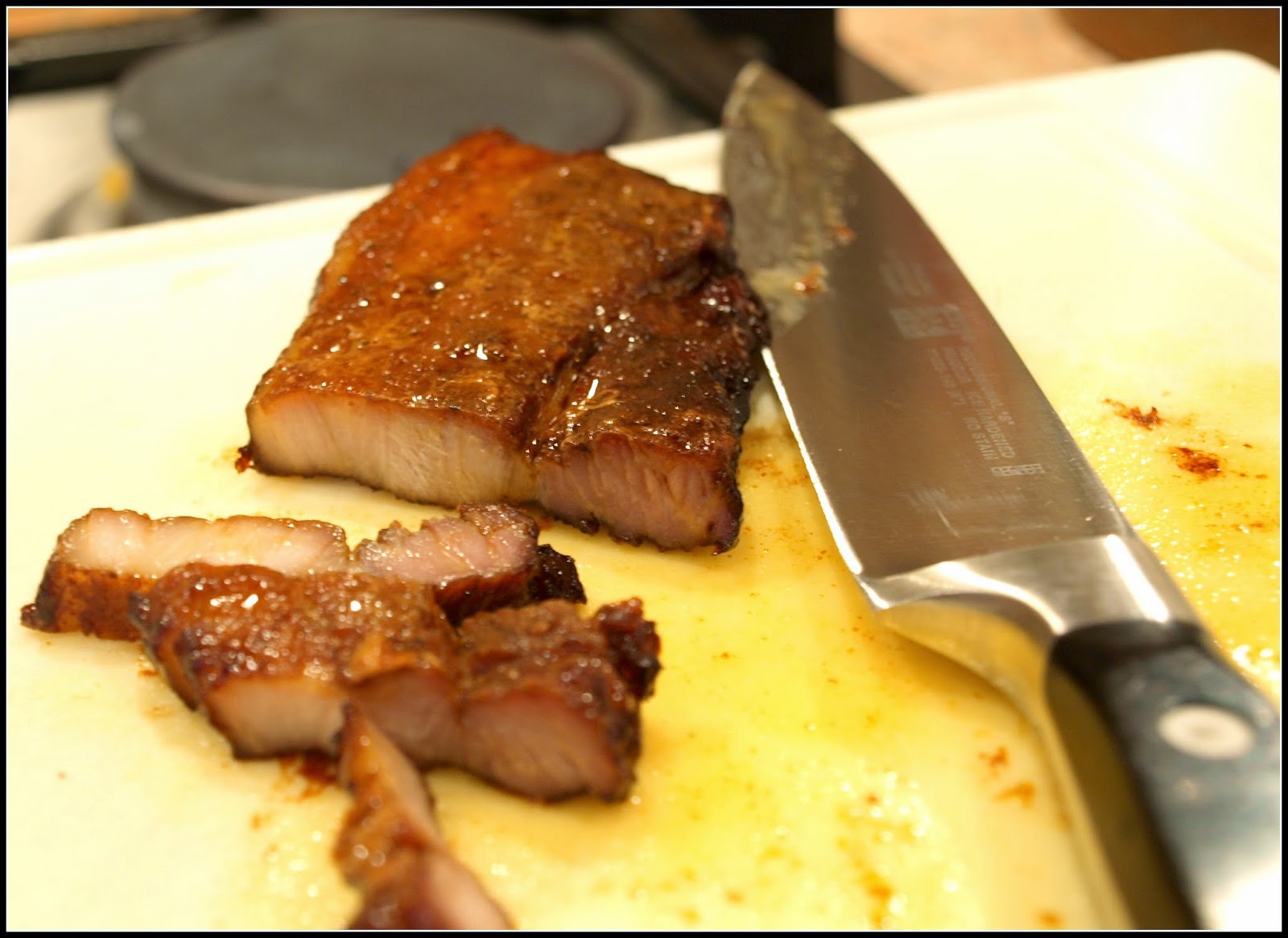 The little lanes in Hong Kong are always resonating to the sound of butchers enthusiastically chopping their Char Siu on big wooden chopping-boards, with their massive heavy cleavers, and the shops are festooned with arrays of Char Siu and Peking Ducks hanging from hooks on high rails. Meanwhile, the smell of wood smoke and Five Spice powder wafts all around....

This past weekend I had a go at making something inspired by this. It turned out well, so today I'm going to describe it.

Char Siu is normally made with pork shoulder or belly. If you like the fattier cuts, buy the belly - it has more flavour and produces a more succulent end result. I bought a pack of sliced belly pork, which is a really good-value cut. I got 495g of meat for a mere £2.47. The only preparation the meat needs at this stage is to remove the skin. I discarded it, but you could if you wanted cook it separately to make some crackling. The next step is to marinate the meat. In a suitable dish, mix up all the ingredients (below) and make sure the meat is thoroughly coated before covering and refrigerating for several hours. (I gave mine six hours).

As mentioned, the Five Spice powder is crucial. It's hard to say how much you need to use. This is the sort of thing that is instinctive! If it helps you to judge, I used about half a teaspoonful for 495g of meat. Too little Five Spice would be better than too much though, because it is quite powerful, especially when fresh.

Cooking
I cooked the meat in the same dish in which it had been marinated - it was a Pyrex one - and I gave it about 3 hours on a very low heat (about 110C), turning the slices once or twice to ensure even browning. When I was satisfied that the meat had gone really tender (testing it by prodding it with a knife), I took it out of the oven and let it cool. 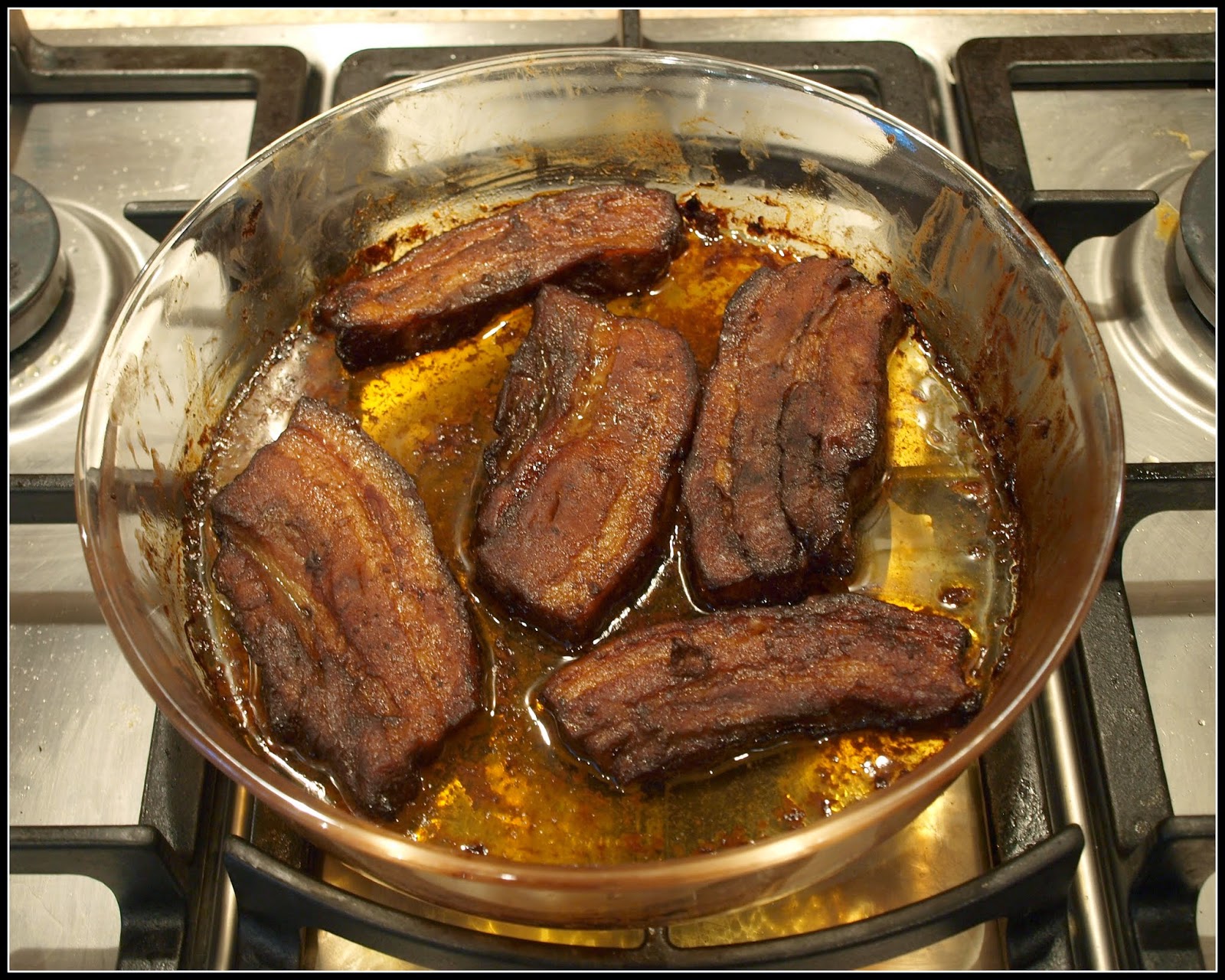 When it was cool I sliced it into small pieces: 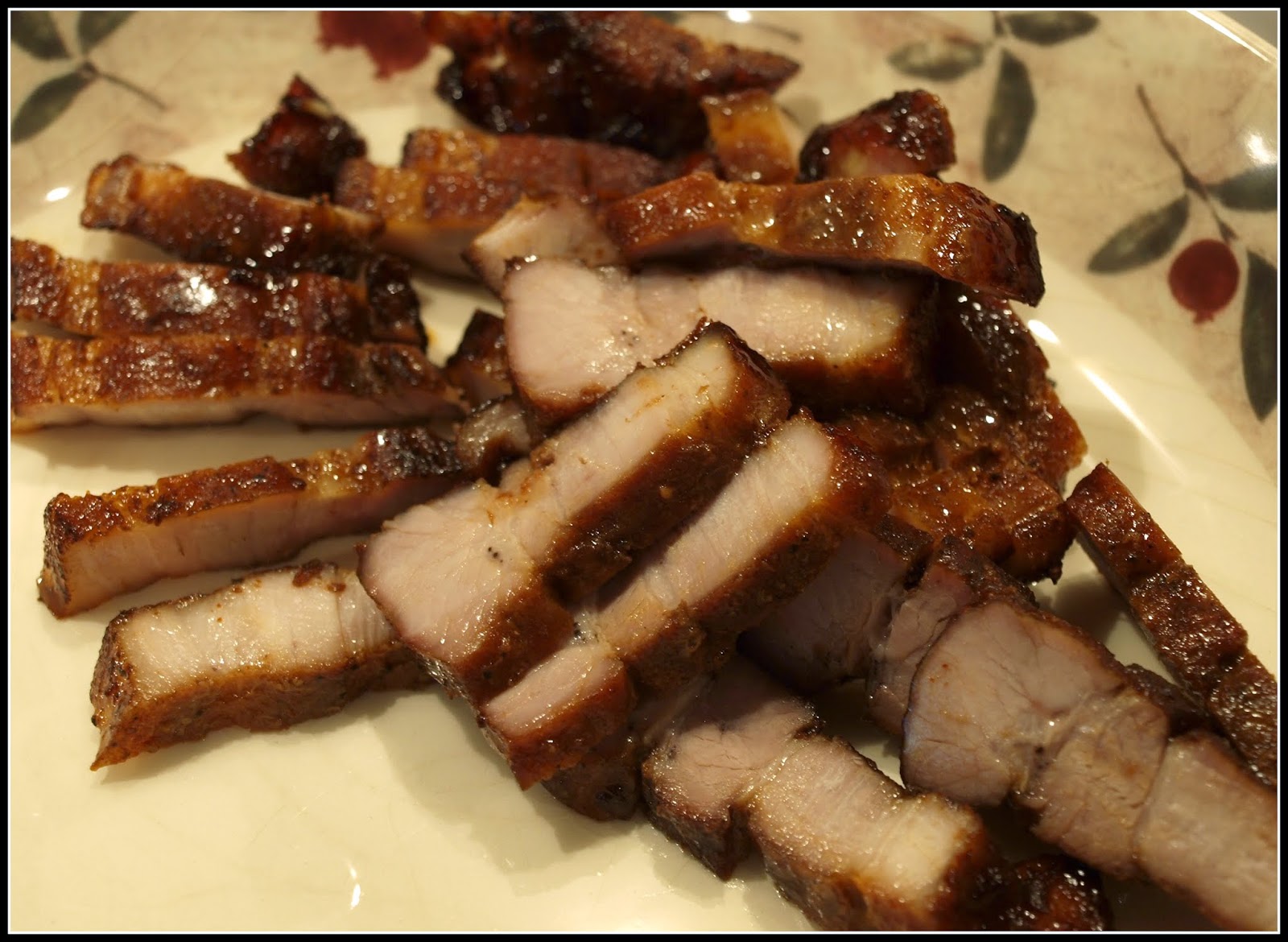 BTW, I confess that at this stage (lukewarm), both Jane and I did have a little test (for quality-control purposes, you understand) and agreed that it was so delicious that the dish had to be covered with clingfilm to stop us both guzzling it all before Dinner-time!

Meanwhile... I pre-cooked some Chinese noodles and left them to cool. Then, when the time came, it was easy to finish the dish. First I warmed the noodles in a hot wok, adding some chopped Spring Onions and Tomatoes for a bit of colour: 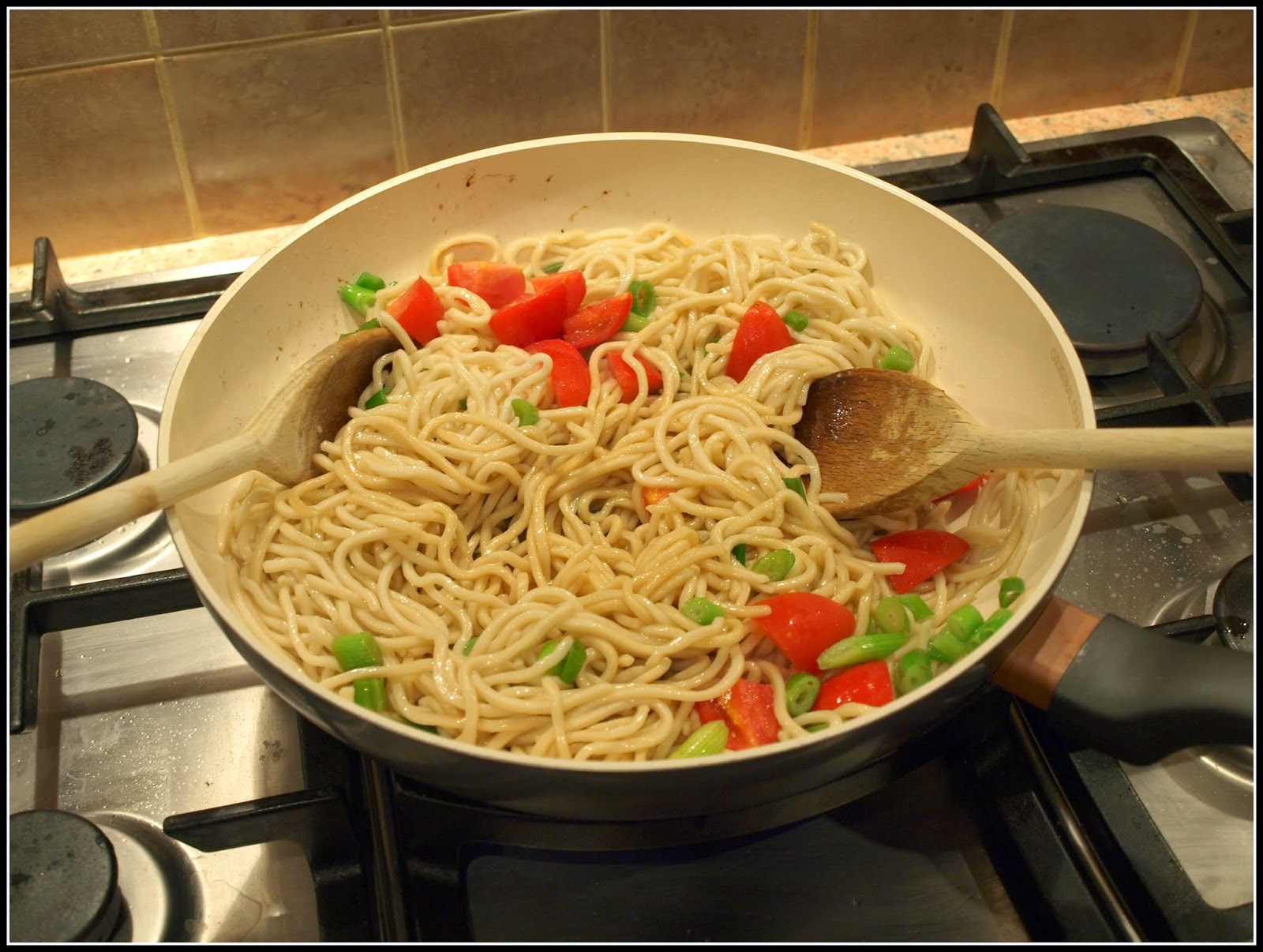 Then I stirred in a good glug of Soy Sauce and let it sizzle a bit before adding the Char Siu. Oh wow, if only you could have smelled it at this point! 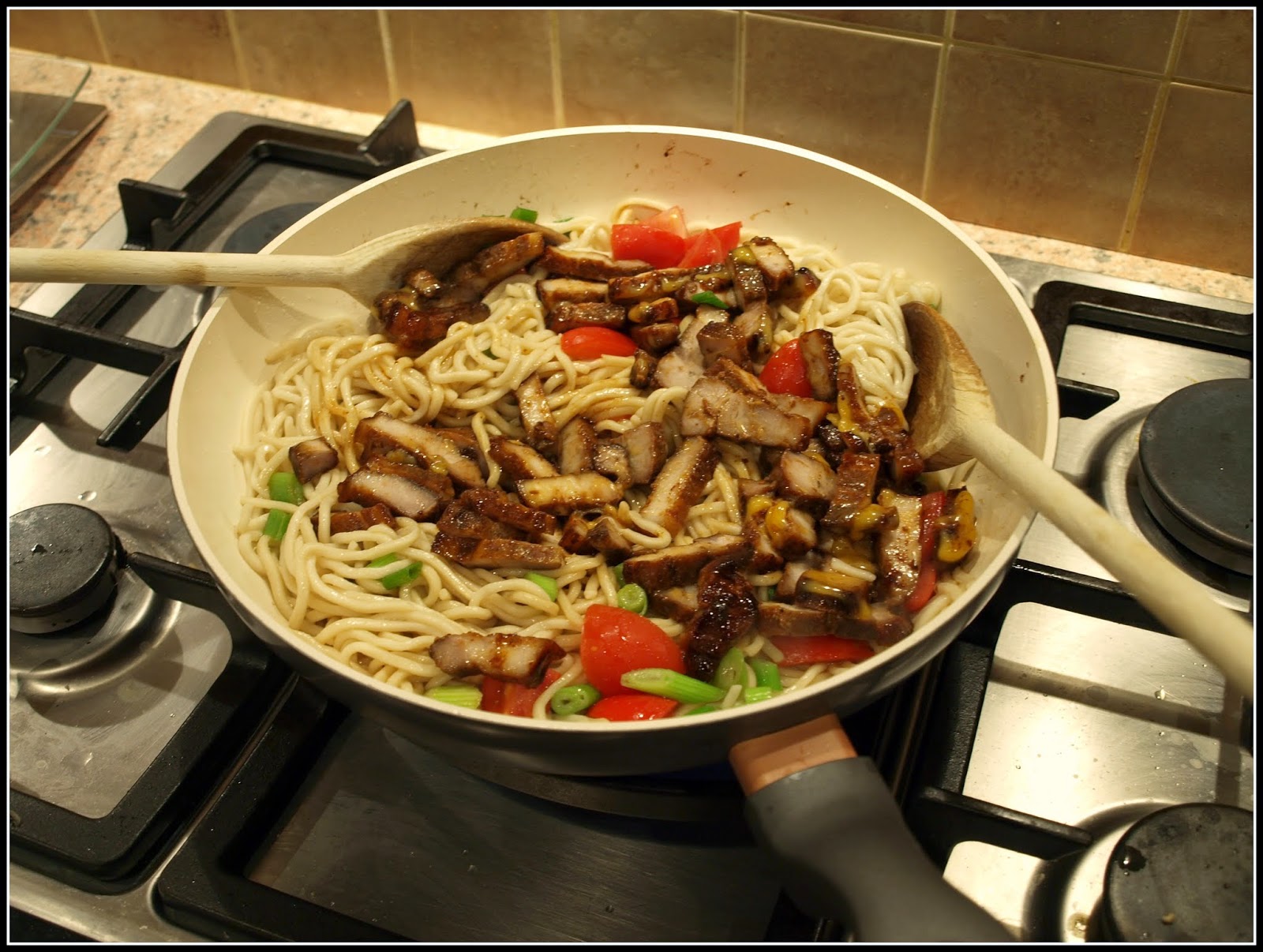 All that was necessary was to cook the dish for three or four minutes, to thoroughly warm the ingredients, stirring occasionally (notice I used two wooden spoons for this, so that I could turn the noodles without damaging them or the ceramic wok), and then serve: 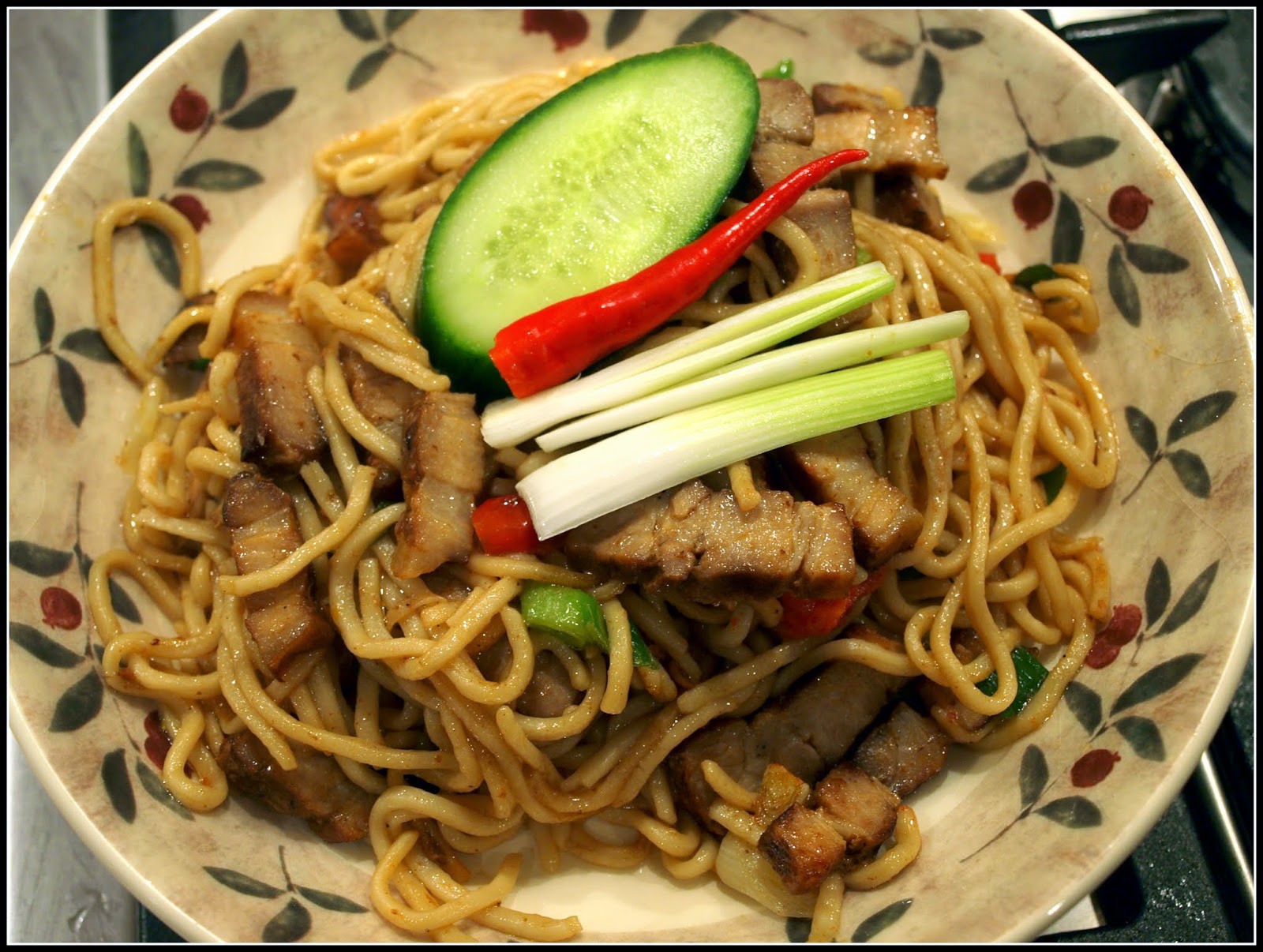 Notice the cheffy garnish of cucumber, chilli and Spring Onion!

I was really pleased with how this came out. In terms of effort-to-results ratio, this dish is definitely a winner! Cheap, easy to do (as long as you plan ahead), and wonderfully delicious. What's more, for us it was evocative of good times in Hong Kong years ago...
Posted by Mark Willis at 12:00