Apart from my Winter veg (Brussels Sprouts, Leeks, Swedes, Parsnips) and the PSB for next Spring, there is not much left in my garden now except salad vegetables.

Many of you will know that I am seldom content with a simple salad. When salad is consumed in our house it is normally a pretty complex affair. Not for me a quartered tomato, a slice of cucumber and a solitary leaf of flabby lettuce. My salads often contain ten or a dozen different leaves, so today I am showing off what is available in the garden right now.

First off, Endives. I have lots of them approaching maturity at present, many of them underplanted beneath the Brussels Sprouts. These ones are in a corner of the Sprouts' bed: 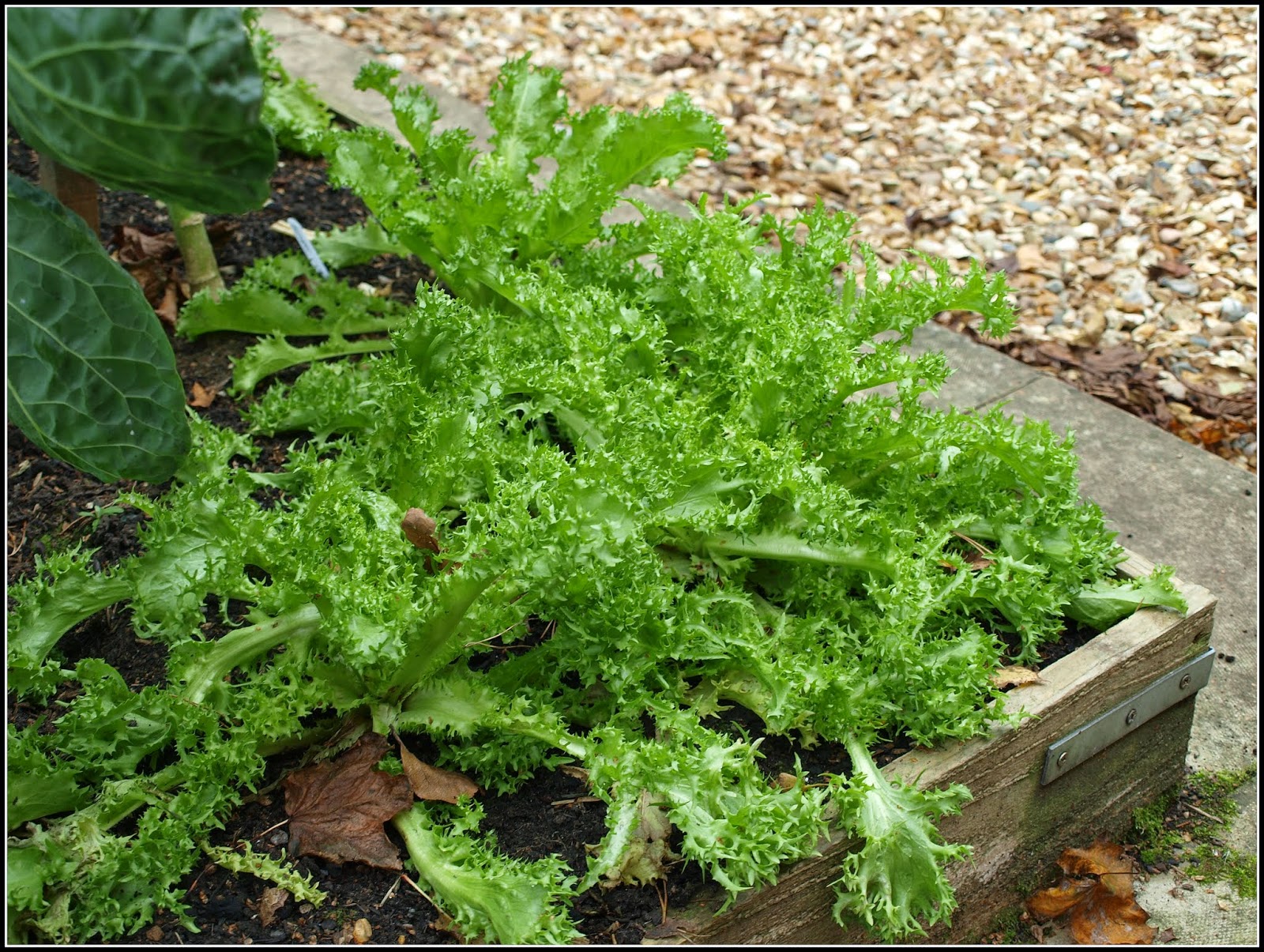 When I make a mixed salad, I usually include just a few Endive leaves, rather than cutting a whole plant. They seem to tolerate the "Cut and Come Again" technique quite well. However, the Endive is also a vegetable that I do frequently cut as a complete plant, especially when we are having one of our favourite meals: rack of Lamb with potato Gratin Dauphinois and Endive salad!

Radicchio has plenty of mentions on my blog this year. Here's a classic example, in a photo which shows quite nicely the big green outer leaves lying horizontally with the tight (reddening) heart in the centre. It looks very much like a cabbage! 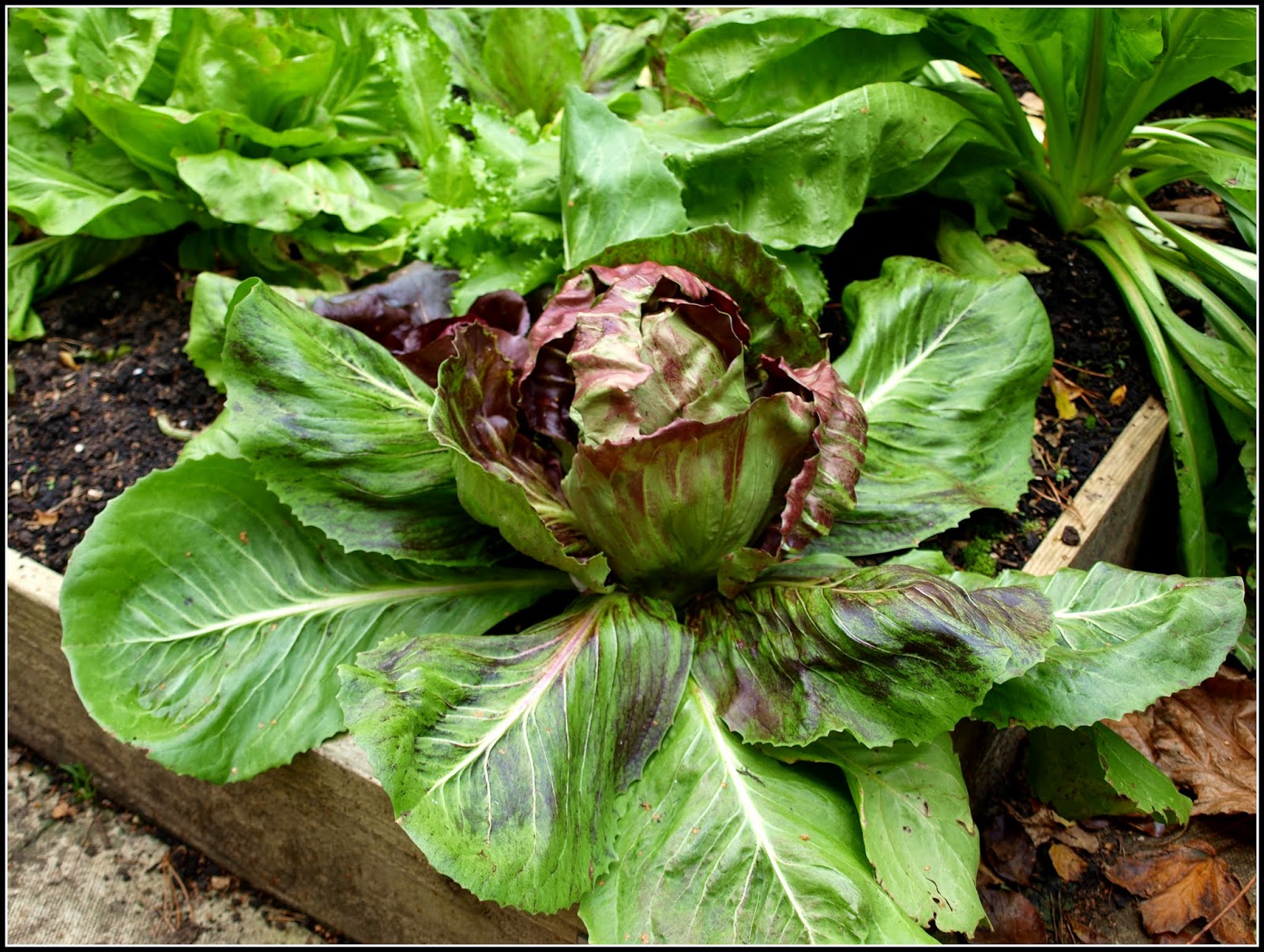 The Landcress is doing well. This is a veg that doesn't require much space, since you don't eat it in large quantities. It has a strong peppery flavour and is best used sparingly alongside milder leaves. This little pot of it would probably be enough for us, but ironically it contains only the last few plants that I was reluctant to discard after planting out the others in one of the raised beds. 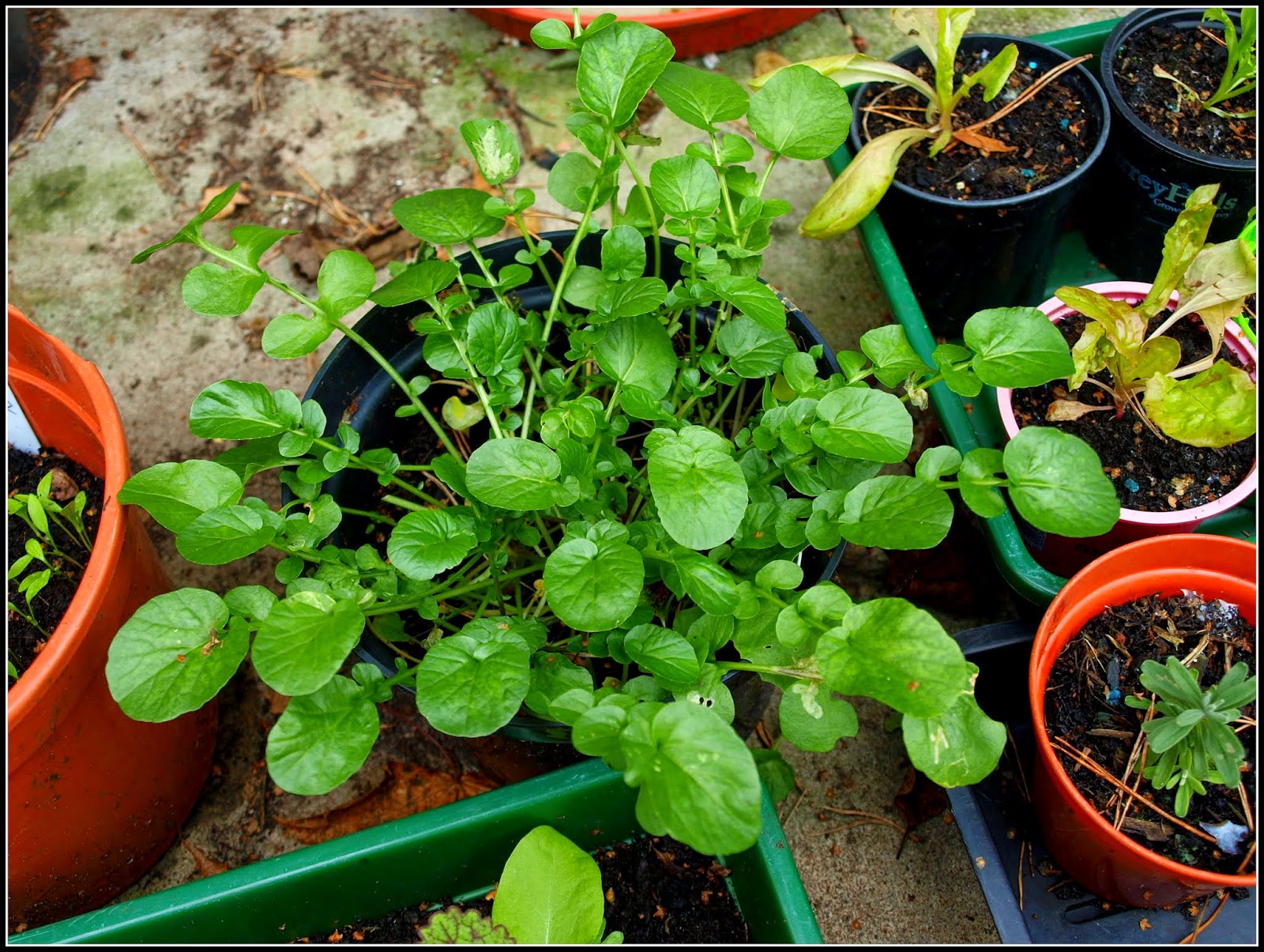 The Leaf Celery has got very big now, despite being confined to its plastic crate. 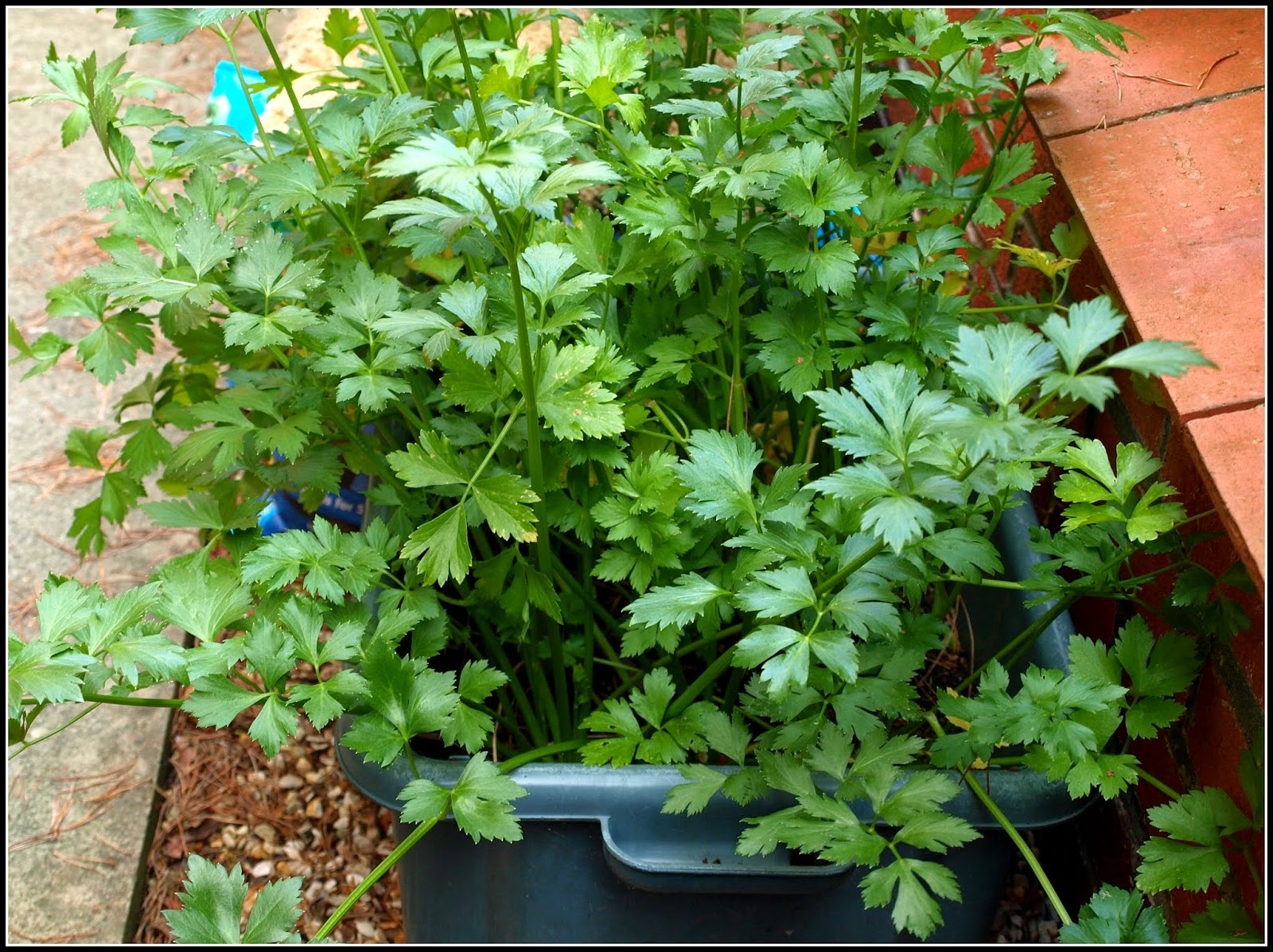 The tiniest leaves of these plants are a very welcome addition to my mixed salad repertoire. If you have not tried growing this plant, I strongly recommend that you give it a try. It has an incredibly strong, yet really pleasant flavour. I don't like the texture of Celery, but I do like its flavour, so Leaf Celery "hits the spot" for me. It has all the flavour of Celery, but none of the stringiness. Once the leaves get beyond the tiny stage I use them for adding a savoury boost to stocks and soups. One or two leaves in a big pan of stock is plenty. Does anyone else grow this vegetable? And have you had any success with over-Wintering it? Should I discard it and sow more seeds next year, or should I try to keep it going? 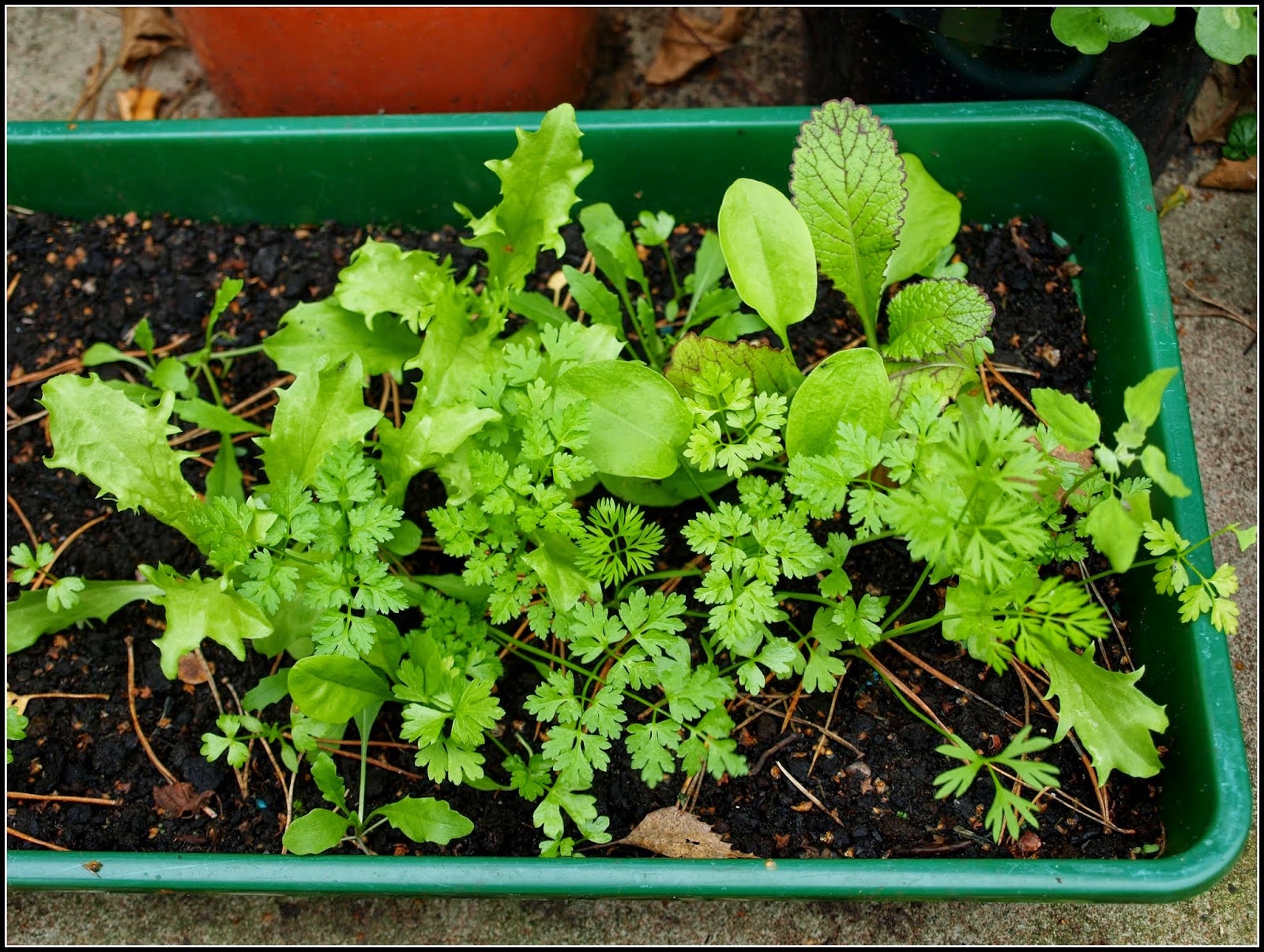 At first sight, that little tray is nor particularly impressive, but it is effectively a complete ready-made mixed salad. This particular tray suffered a bad start, because something trampled on it just after the seeds had germinated. Probably a cat; possibly a fox. However, some of the plants survived. You can identify endive, sorrel, rocket, lettuce, mustard, carrot and chervil, and maybe a few others if you know where to look (not to mention the inevitable pine-needles!).

Chervil is a herb that I seldom crave. Its delicate Parsley-like leaves have a strong Aniseed flavour, somewhat akin to Fennel. You don't see it on sale in the shops because it doesn't keep well after cutting - unlike Parsley which keeps fresh for several days. Just like Dill, Chervil is something I associate with fish (I know this may just be a false perception), and since I don't eat any fish I tend to ignore the Chervil. I have also read that in France, Chervil is a popular herb to complement Carrots, so I might just try that (though in my grumpy old way I reckon I would probably prefer Parsley!). What do you think? Are there any Chervil advocates out there?

Finally for today, have you considered Nasturtium leaves as a salad ingredient? They have a firm, rather waxy, texture and a peppery taste. Again, this is something you probably wouldn't want to eat a lot of, but which is nice when mixed with other things. Nasturtium flowers are also edible and their bright colours can contribute a good visual element to a salad. 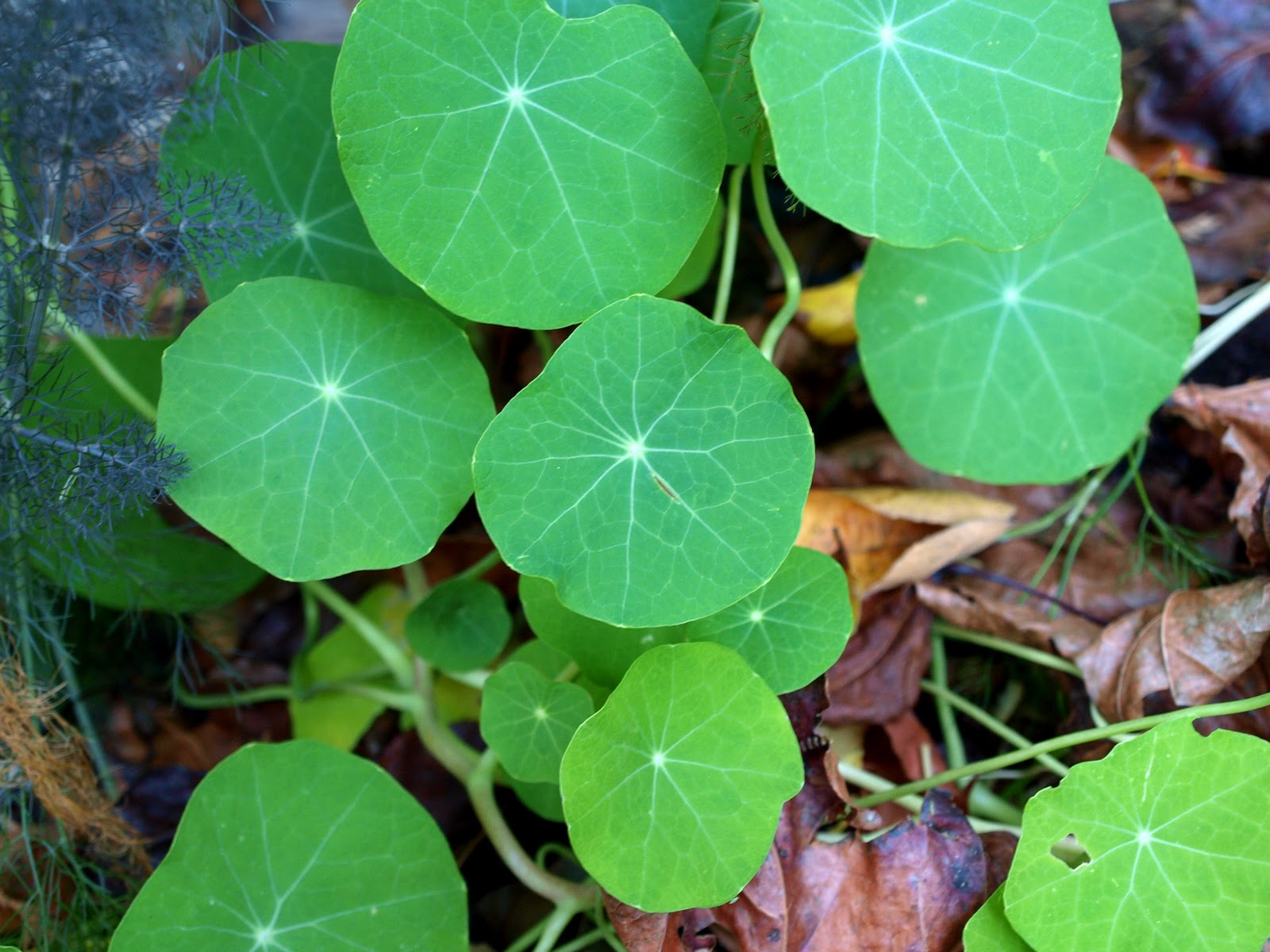 I have to admit that I have not had great success with growing Nasturtiums. I think this is largely because I have never put them in the right place. They like lots of sun, and the sunny spots in my garden are already taken! If you want to see some decent Nasturtiums, have a look at THESE, growing in Flighty's Plot. Mike could make quite a few salads with his Nasturtiums I think...