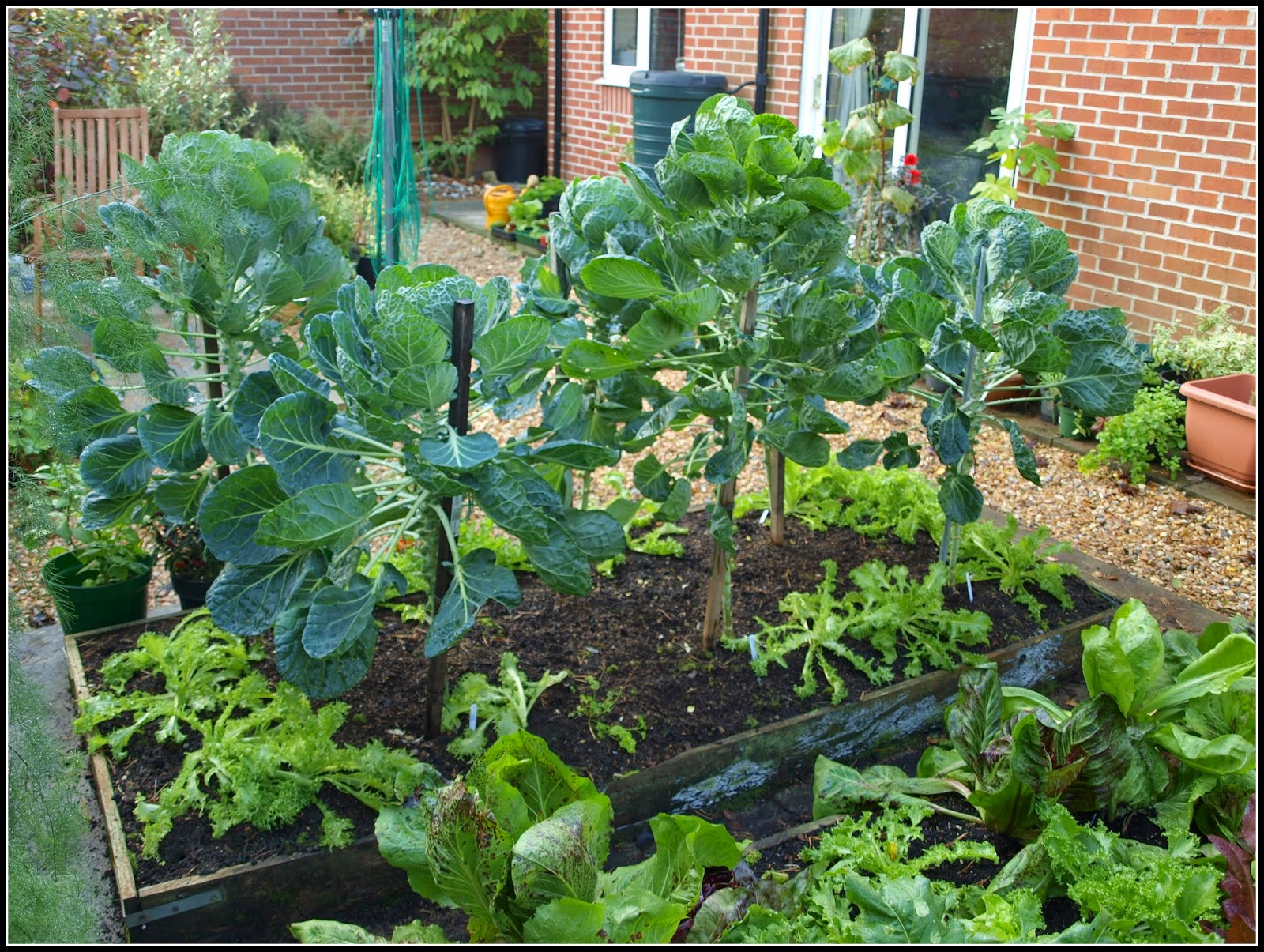 However, all is not well. They are infested with Whitefly. When I brush my hand over them, clouds of little white flies emerge. These are the Cabbage Whitefly Aleyrodes Proletella, not to be confused with the similar-looking Glasshouse Whitefly Trialeurodes vaporariorum, which infests indoor plants, especially tomatoes and peppers.

The tiny scale-like nymphs of this annoying pest cluster on the undersides of brassica leaves. The photo below shows a mix of adult flies and nymphs. The latter come in a range of colours from white through yellow to brown. 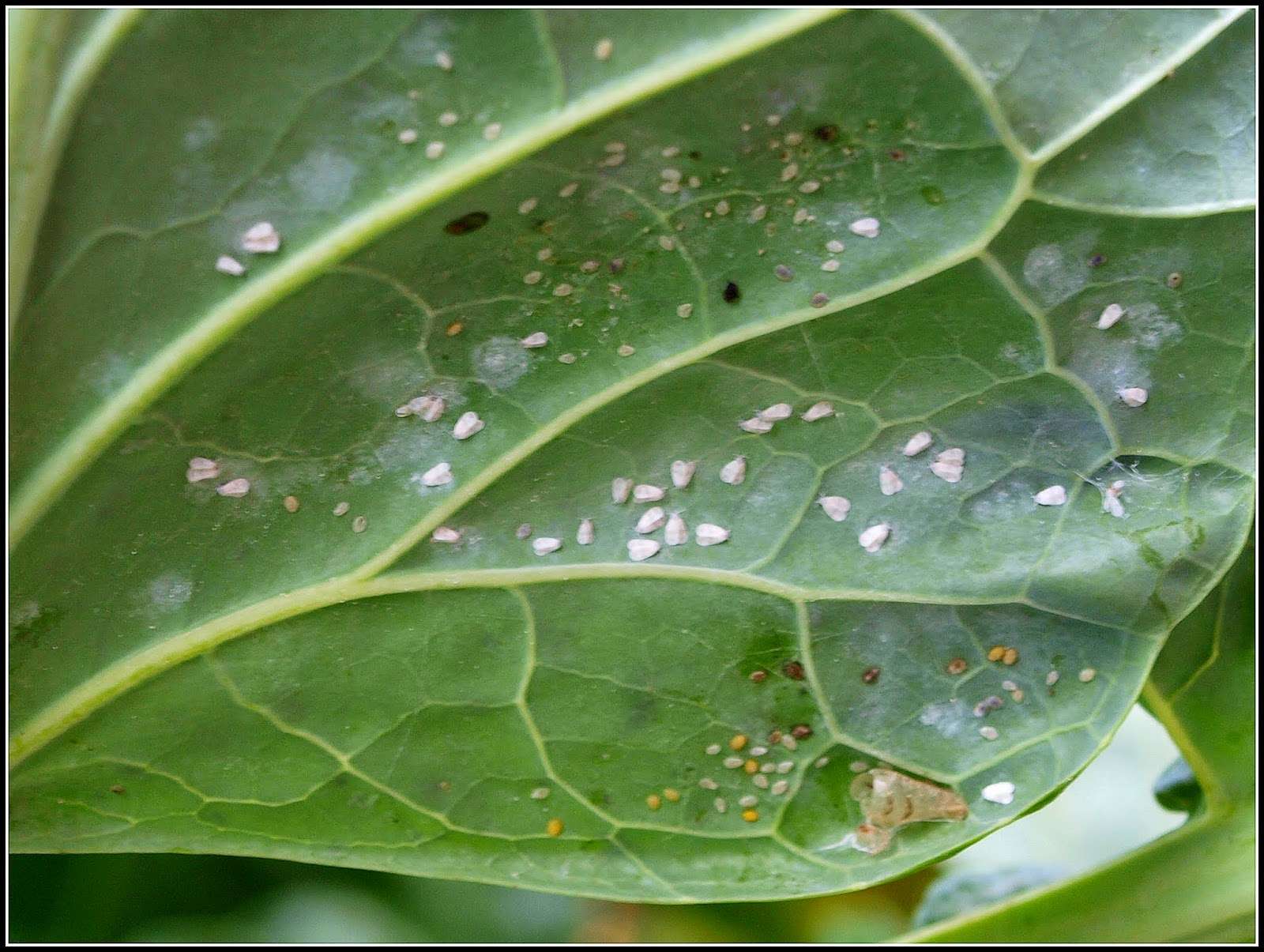 The nymphs suck the sap of the plants and excrete a sticky substance known as honeydew which promotes the growth of black sooty mould. 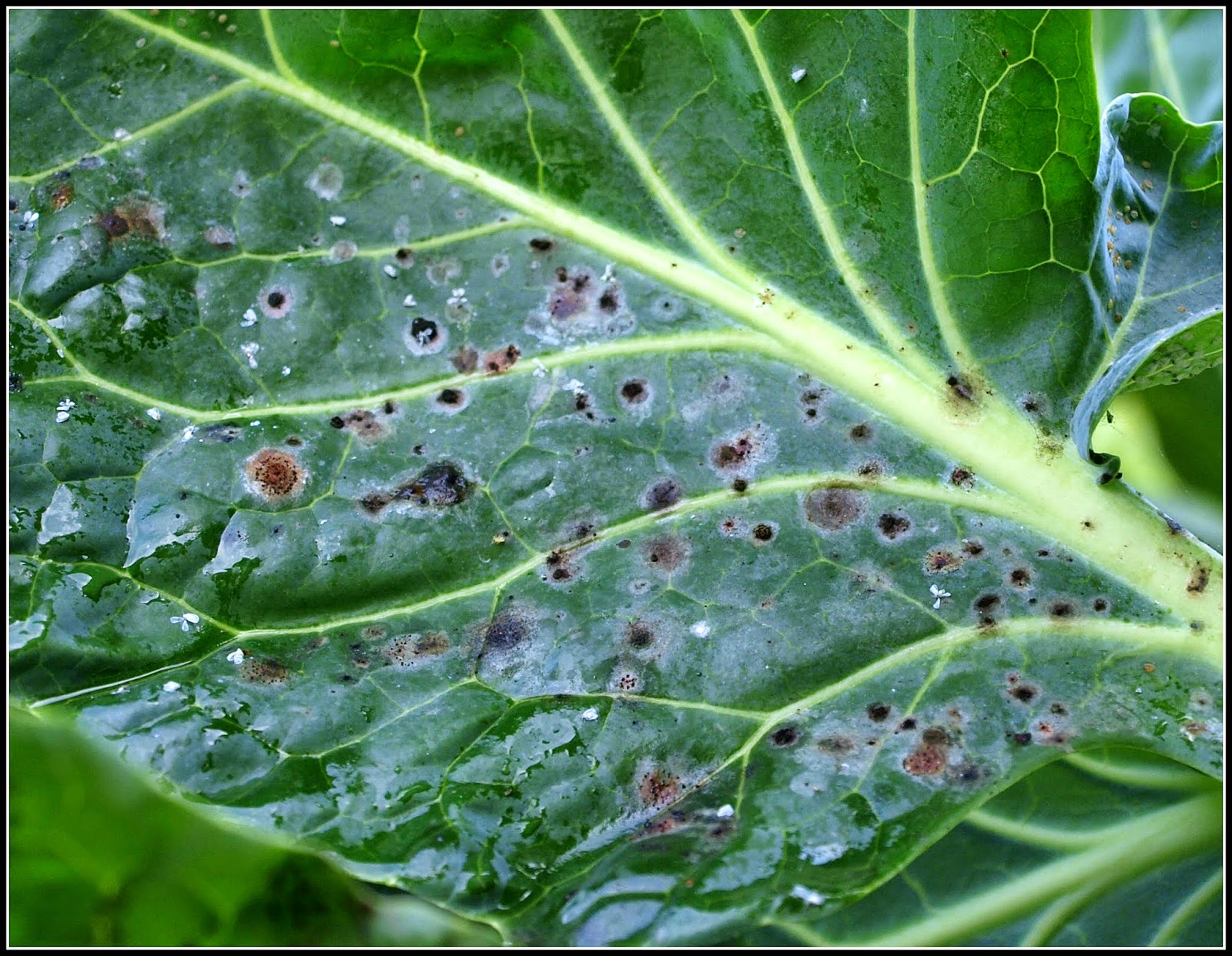 Although large brassica plants are normally strong enough to survive the sap-sucking, the sooty mould often affects them more severely, because it retards their growth and encourages the ingress of other diseases.

If you follow the link earlier in this post you will see that even the much-esteemed Royal Horticultural Society considers that this pest is well-nigh impossible to eradicate. The best you can hope for is to "keep it under control". Easier said than done! The scaly bodies of the nymphs seem designed to protect them from pesticides. And of course the waxy leaves of the brassica plants mean that pesticide sprays don't adhere very well anyway. So what to do?

I am trying a rather basic remedy: I  filled a spray bottle with water to which I added 3 crushed cloves of fresh garlic and a few drops of washing-up liquid. I have liberally doused the Brussels Sprout plants with this spray. My theory is that the washing-up liquid will help the garlic-infused water to stick to the leaves for long enough to kill at least some of the Whitefly nymphs. Of course this relies on the premise that garlic will kill Whiteflies, which may be entirely false! Garlic seems to kill many pests (it has also been in the news recently being used as a remedy for Ash Die-back disease), so maybe it will help here.  I have also done my best to gently rub off as many of the nymphs as possible, which is no mean task even when you only have six plants. Between them they have a lot of leaves. 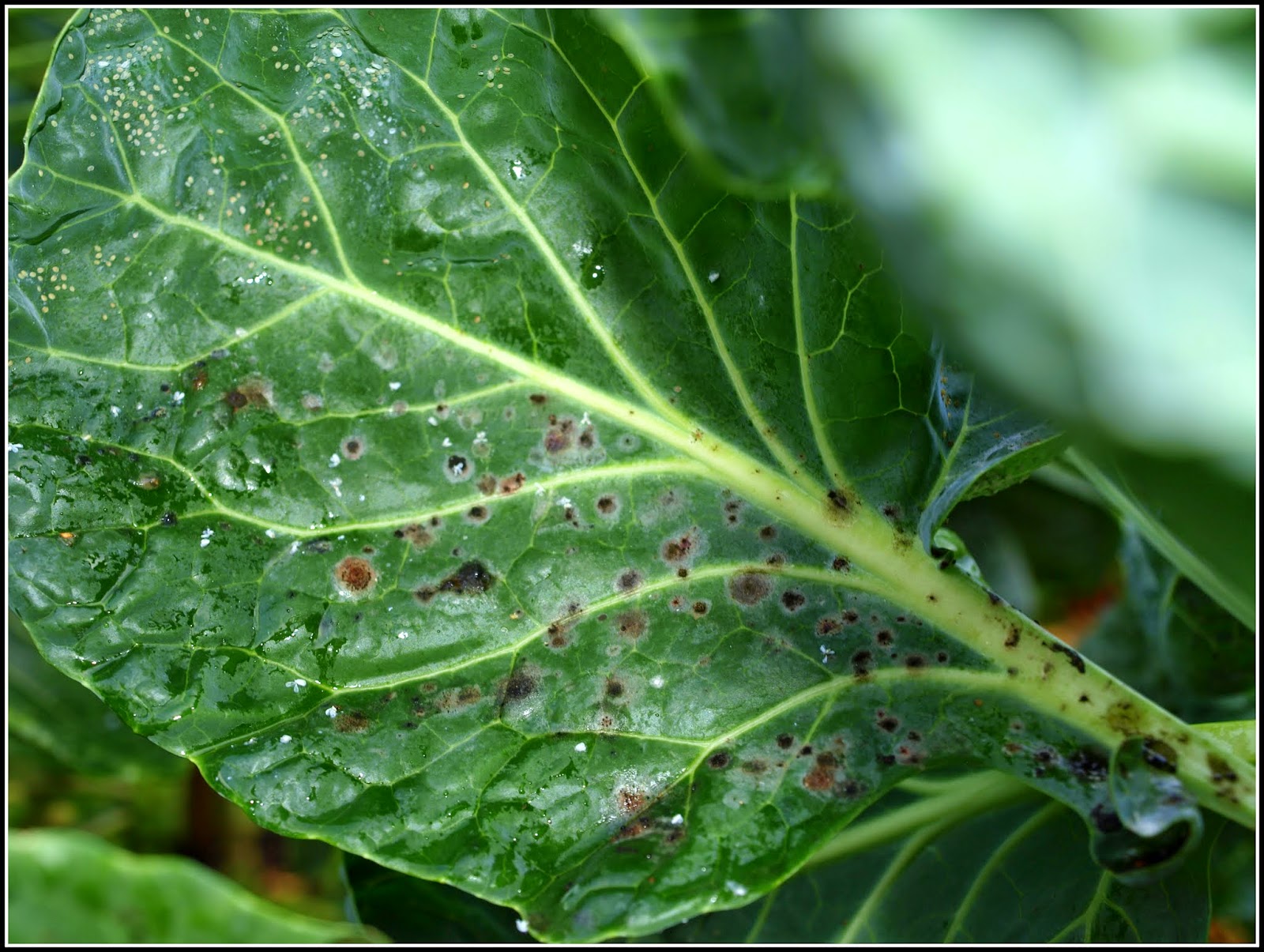 The RHS thinks that Cabbage Whitefly do little real damage, because they affect the parts of the plant that are not normally eaten. "Fortunately, cabbage whitefly only infests outer leaves and usually causes little real damage to parts of the plant that are consumed. Therefore infestations can usually be tolerated", they say. Well, I'm not so sure, because I was definitely planning to eat the Brussels Tops, the cabbage-like crowns of the plants. We'll see how it goes.

To avoid being too pessimistic, I'm finishing this post with a couple of arty photos for you (taken on a rainy day): 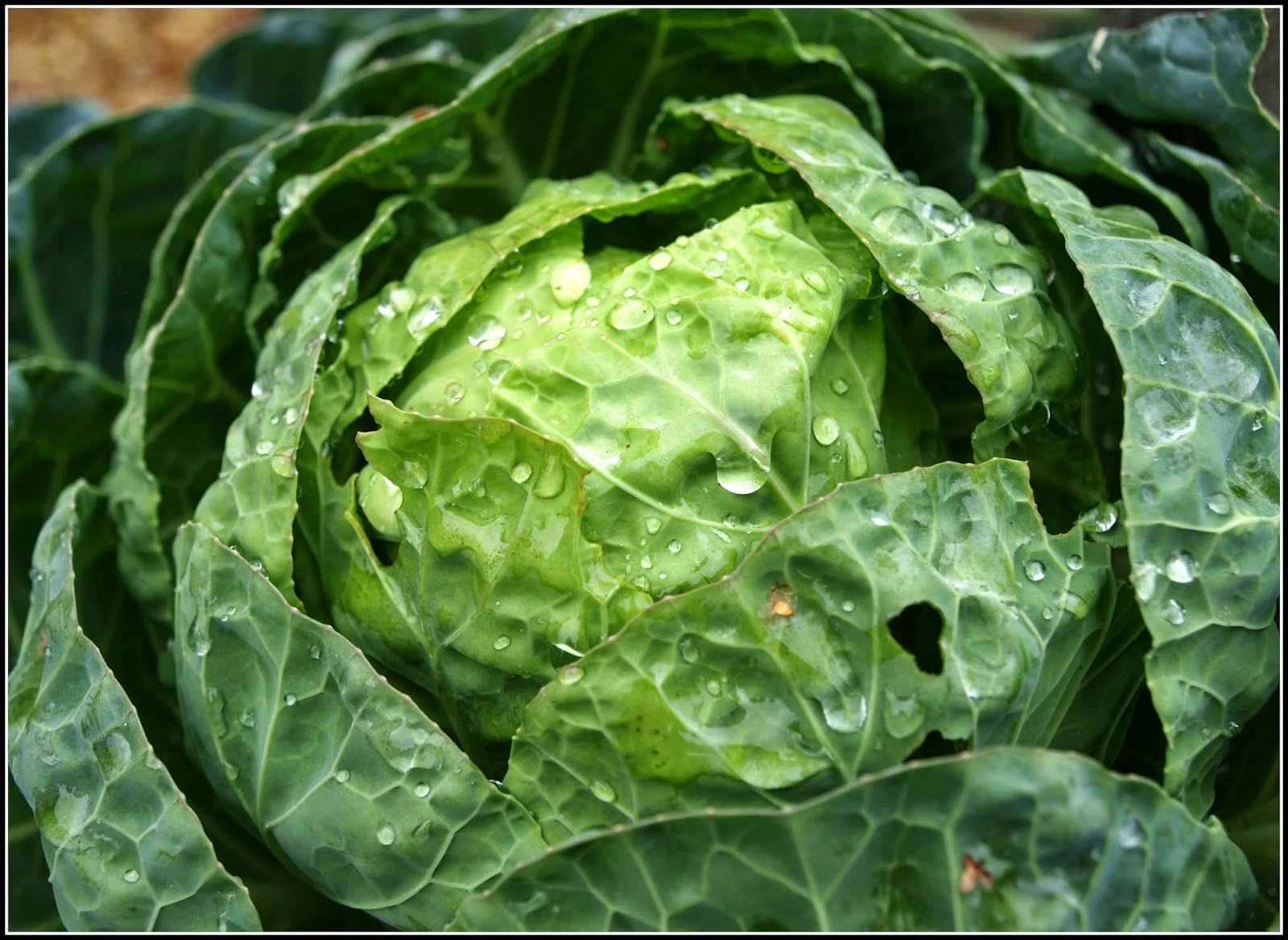 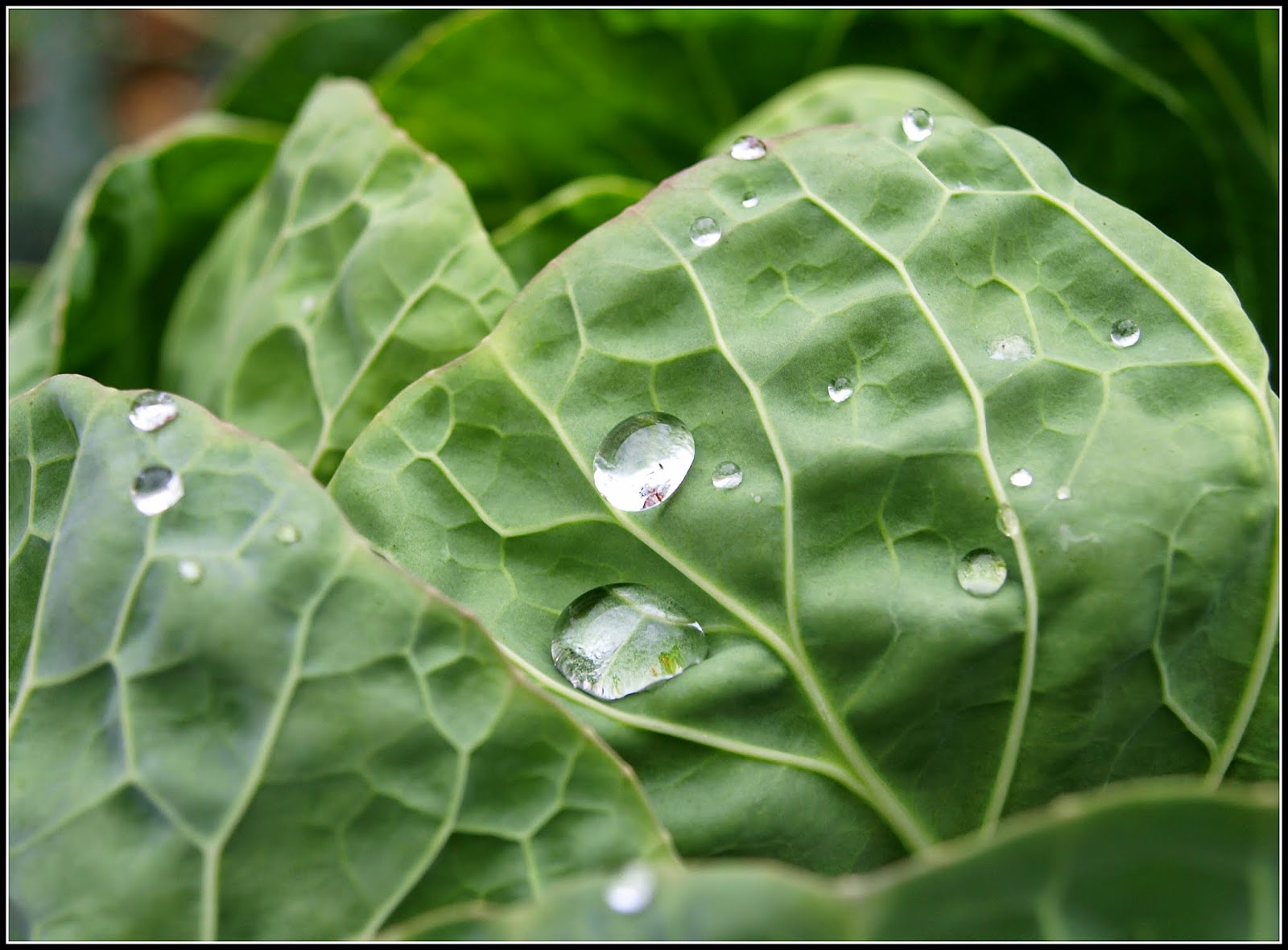