I recently had the pleasure of attending the "Challock Chilli Fest", where loads of chilli-themed merchandise was available for purchase. One of the things we bought was a jar of Harissa, a thick paste made mainly with chillis, which is used in many parts of North Africa for flavouring meat dishes (and sometimes used as a dip, in the manner of Hummus). Just for the record, the Harissa was manufactured and sold by Cafe Mauresque, based  in the appropriately-named Butchery Lane in Canterbury, Kent.

Last weekend I used some of it in a dish of griddled chicken. 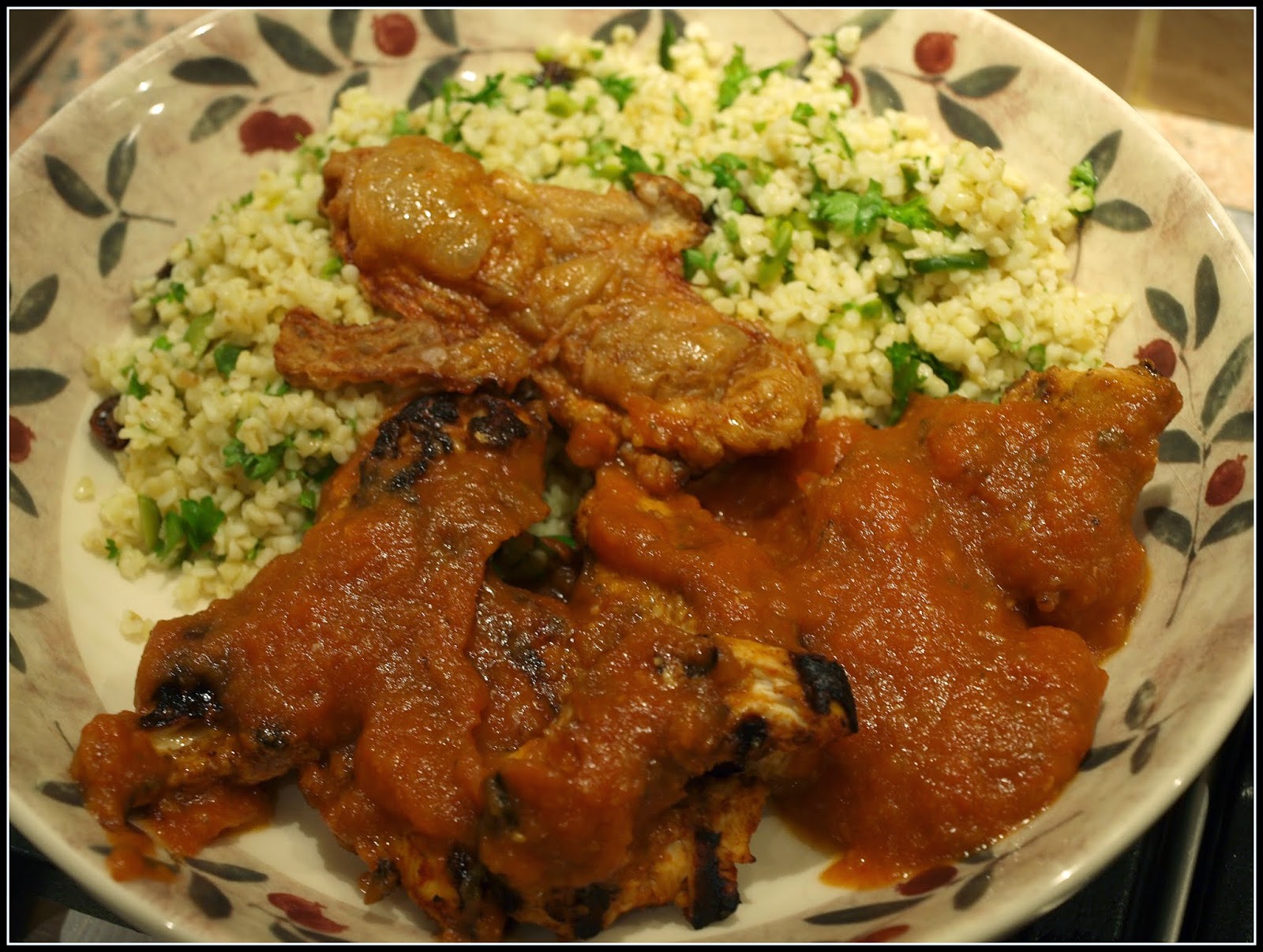 This is my recipe (serves 2): "Griddled Chicken with Harissa"

Cut two chicken breasts into large chunks and marinate them (covered, in the fridge) for several hours in a spicy marinade. This is the marinade I made:
3 tsp Harissa
One fresh red chilli, de-seeded and chopped
Half tsp Chilli flakes
Half tsp ground Cumin
Half tsp ground Cloves
Half tsp ground Allspice
One tbsp vegetable oil

Meanwhile, make a tomato sauce. I used about 500g of home-grown tomatoes, cooked up with a chopped onion and another chilli (optional, of course!), and a splash of water. After cooking for a few minutes I used our "Mouli-Legumes" to sieve out the skins of the tomatoes and then cooked the resultant juice for about 15 minutes further to reduce it to a sauce texture. It was then set aside for later. 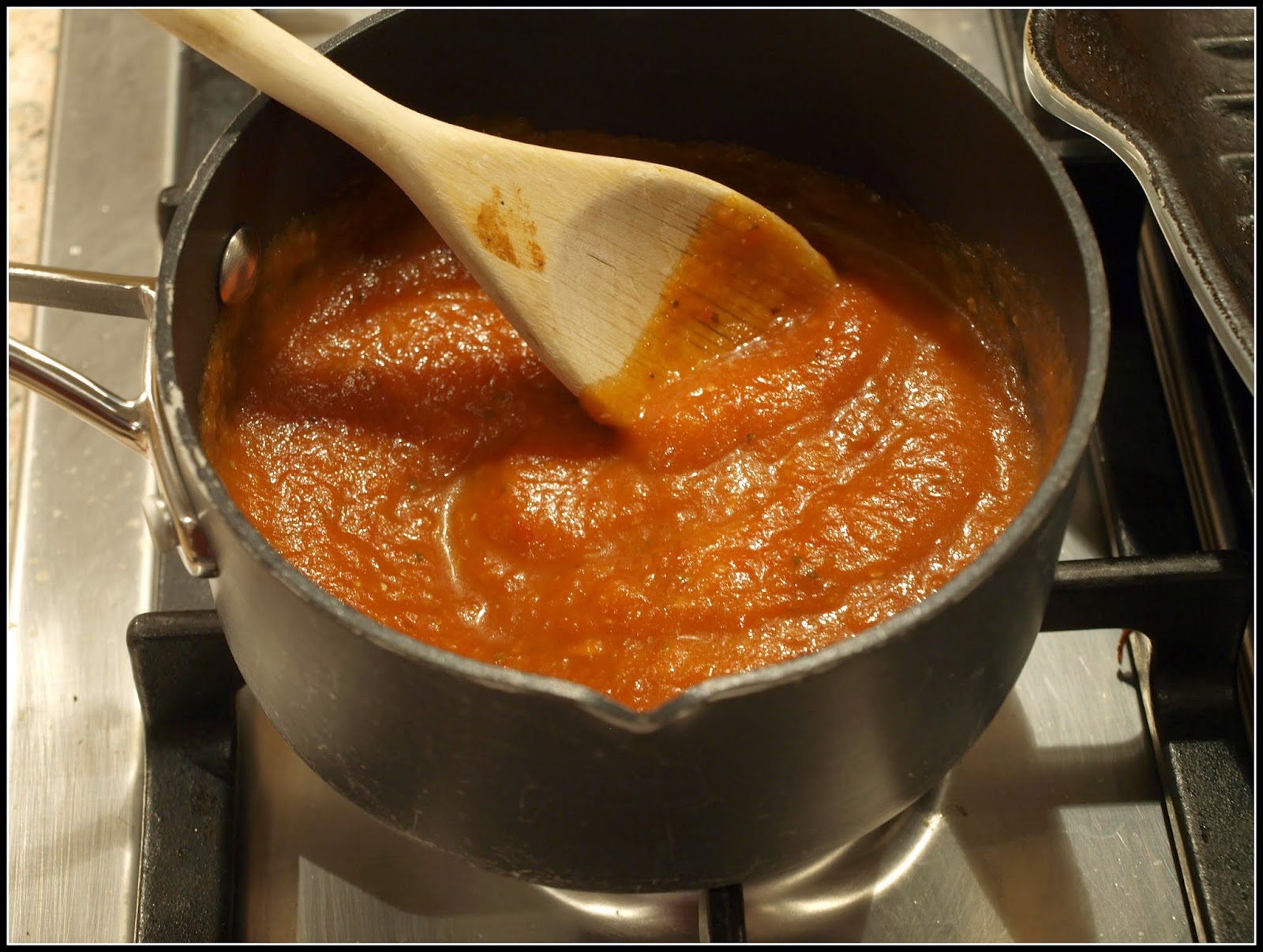 Since the chicken portions I was using had been "skin on", I removed the skin and flattened it out, and then roasted it in a hot oven for a short while (probably about half an hour?) until it was brown and crispy - like pork crackling. Jane tells me that this stuff is called "Chicken Popcorn" because the skin puffs up rather like popcorn does... I wanted it to be the garnish for my dish.

Later, about 30 minutes before serving time, heat a griddle pan until smoking hot. Don't add any oil!
When the pan is ready, griddle the chicken pieces, turning occasionally with tongs. 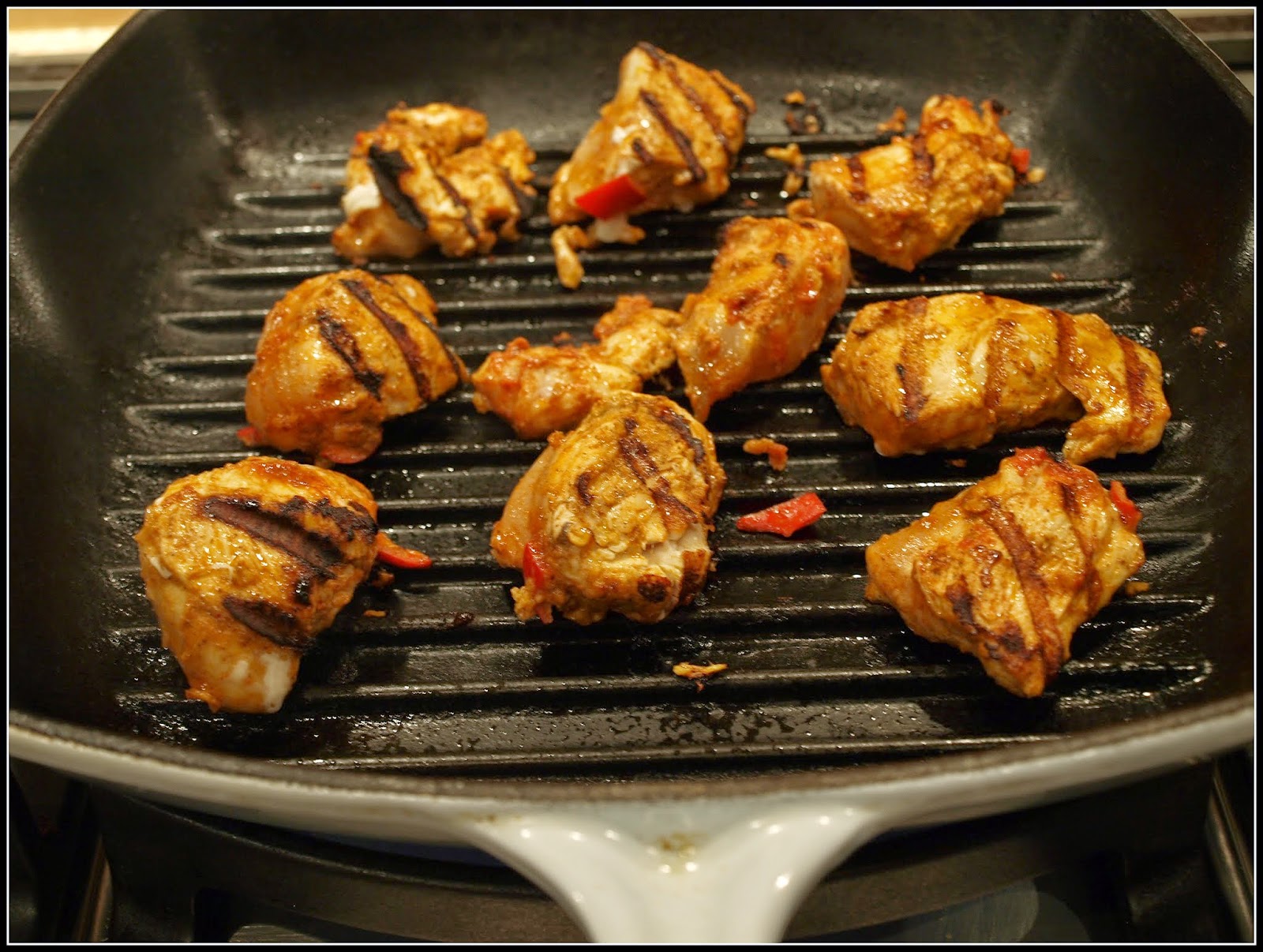 Meanwhile, re-heat your tomato sauce, being aware that with the griddle pan being so hot the chicken will cook very quickly. You are looking for a bit of blackening on the outside of the meat, which will give it a rather smoky flavour, but do ensure that it is cooked right through before serving. I cut open one or two pieces with a knife and fork, just to be sure. When the meat is cooked, transfer it to a dish.

Now finish any accompaniments that you wish to serve. I served a bowl of Bulghur (cracked wheat), flavoured with raisins, flaked Pistachio nuts and loads of chopped Parsley.

Finally, pour the sauce over the chicken, and serve, topped with the crackling / "popcorn". 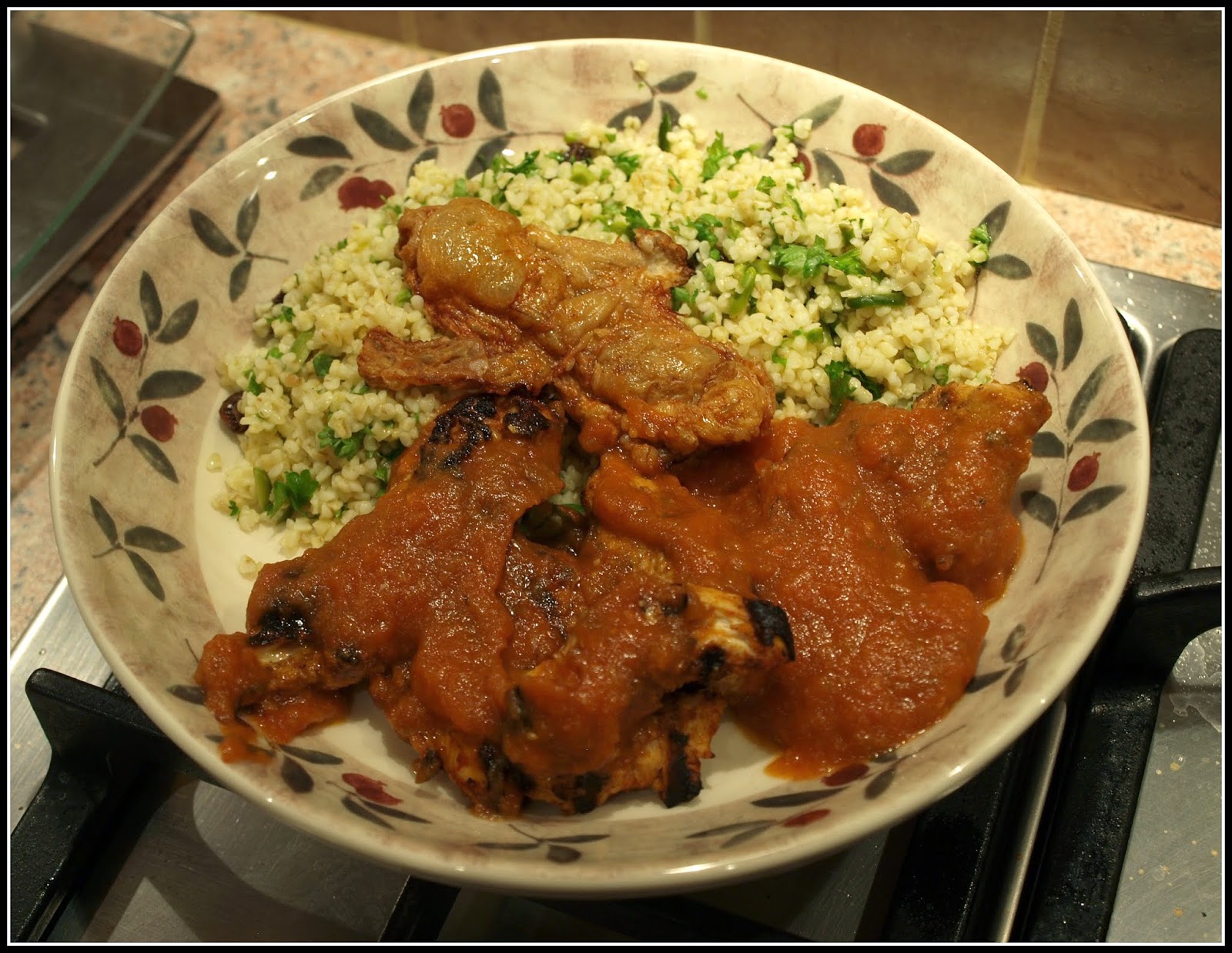 It's not illustrated here, but with this meal we also ate one of my Mesclun-based salads, with lettuce, endive, radicchio, landcress, rocket, mustard, baby Pak Choi, and Celery Leaf.

I know that my regular readers will be thinking "There he goes again. Mark is obsessed with chillis!", but in truth we don't use a lot of chillis in our cooking, and neither Jane nor I likes searingly-hot chillis. We do however like the taste and slight tingle that a small amount of chilli brings to a dish. We felt that the Café Mauresque harissa had an excellent level of both heat and flavour. It was just right for us.
Posted by Mark Willis at 12:00