This is a sort of "metaphorical walkabout", so that I can show you how one or two things are faring...

Well, the first thing is (are?) my Cabbages. This one is a "Predzvest", which I mistakenly thought would not mature until the Autumn! It is ready now. 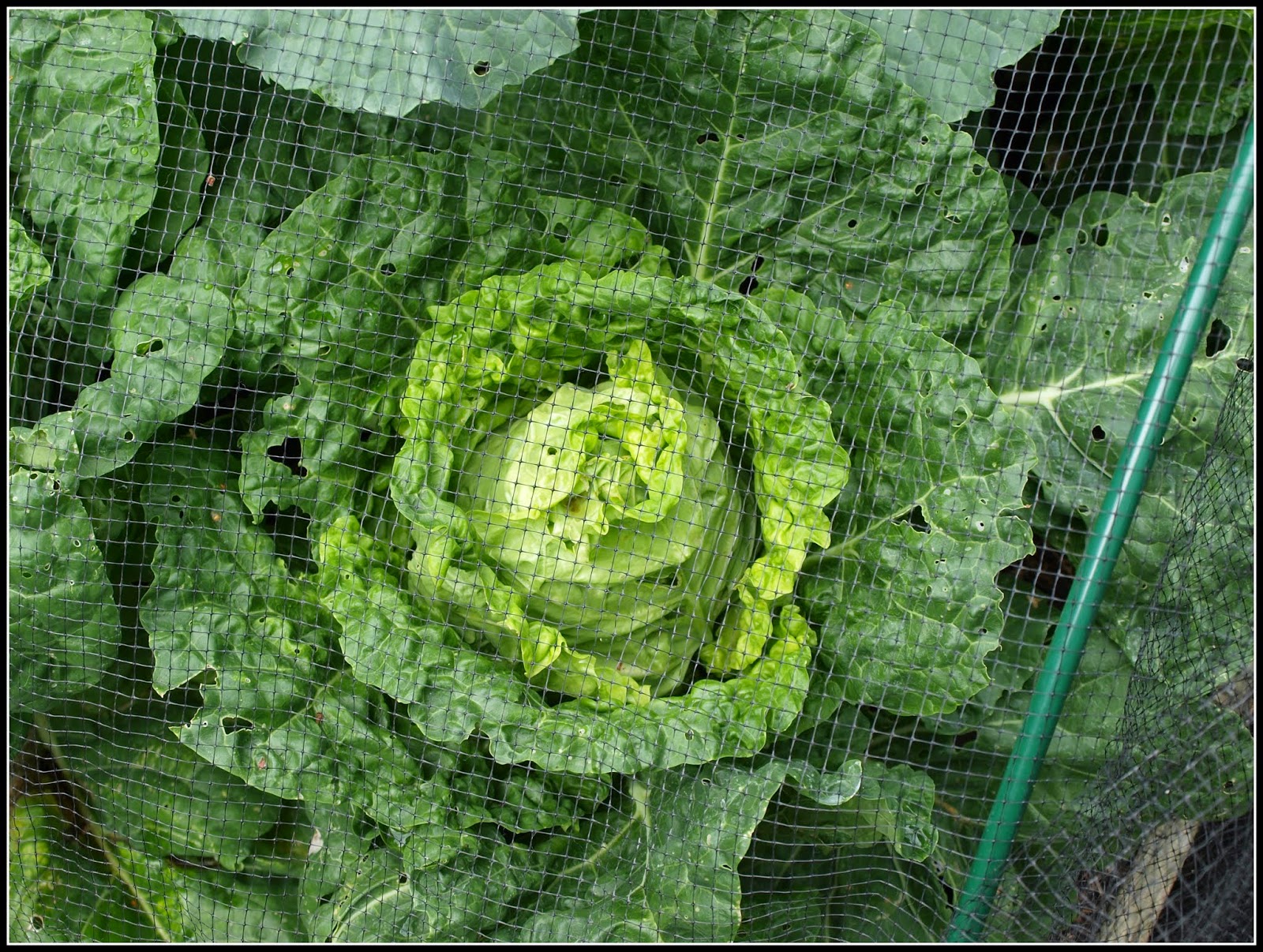 Here it is, posed on top of my wheelie-bin. That's a big cabbage! My netting managed to deter most of the butterflies, but the ragged outer leaves of the plant are ample evidence that netting does not deter slugs! 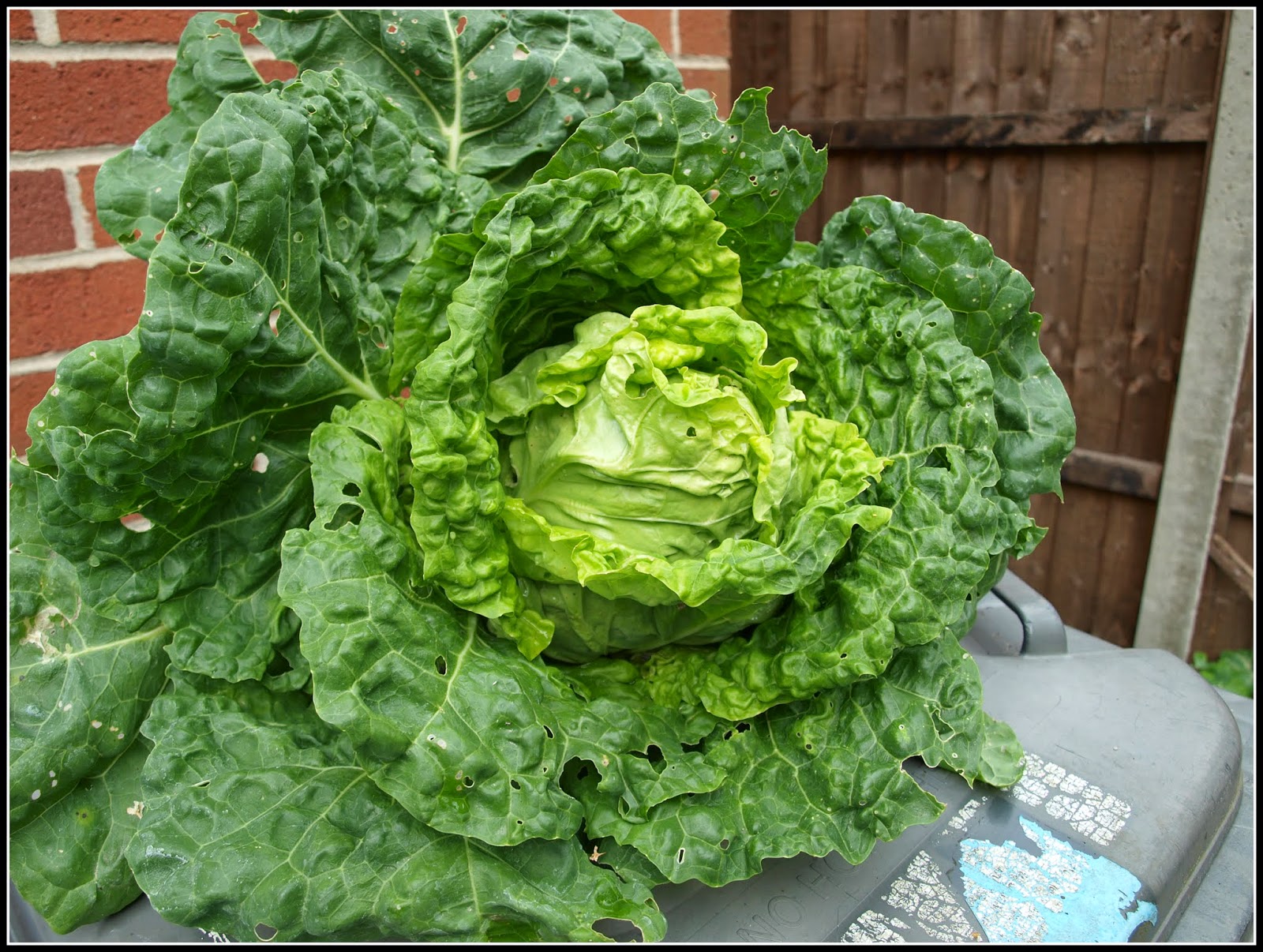 Next to the cabbage I harvested is this one, which is a "Caramba", a pointy so-called Sweetheart type. 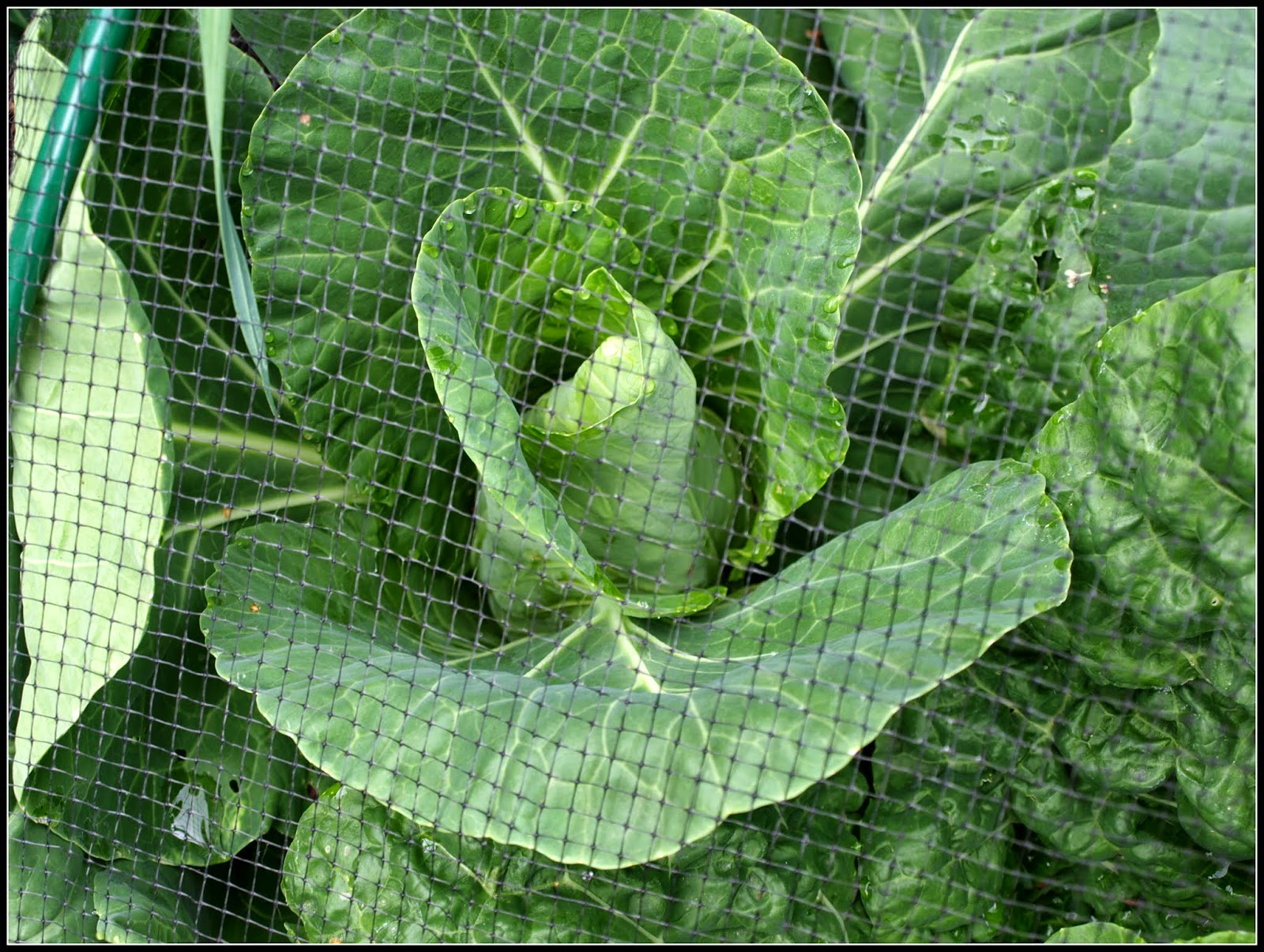 It's not mature yet, but it is looking quite promising.

Still on a brassica theme, here's a novelty in this part of the world - a sunshade for the Purple Sprouting Broccoli! 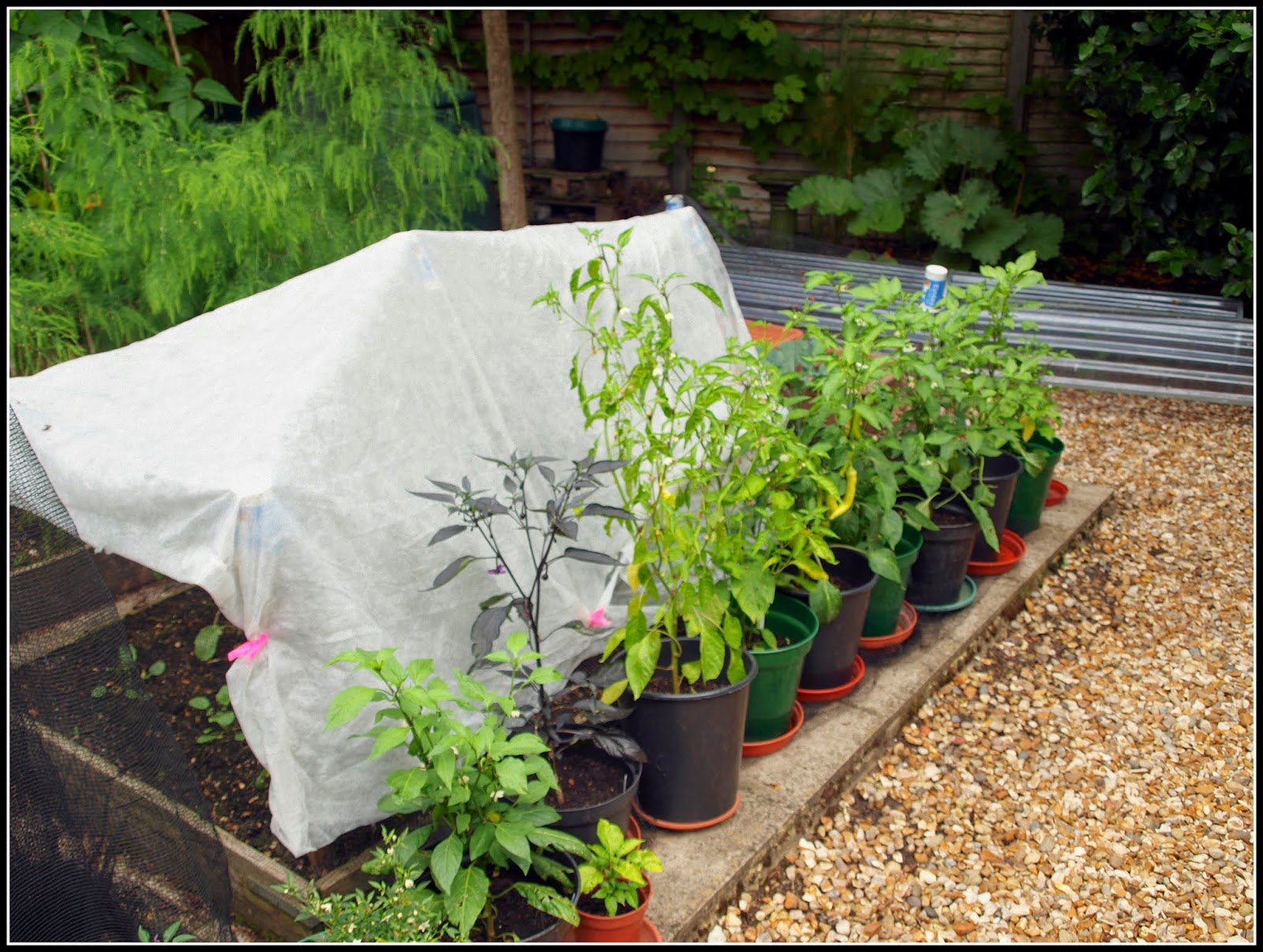 The weather last week was a real trial. Very hot by our standards (high 20s Celsius), very humid, and with some severe thunderstorms that dumped a load of heavy rain. The PSB seedlings were already under stress (you remember I wrote about problems with Cabbage Root Fly?), and I didn't think they would survive the strong sunshine, so I rigged up the sunshade by draping some fleece over the protective netting and securing it with clothes-pegs. 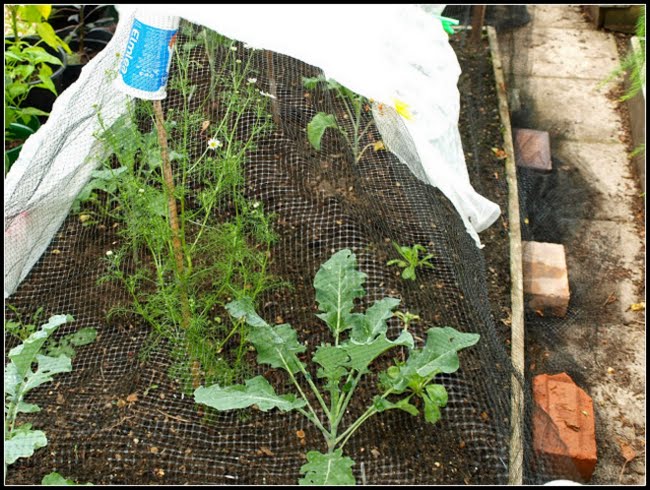 I have labelled this raised bed the "Intensive Care Ward", because the survival of the "patients" is far from assured. A couple of the plants (seen here, nearest camera) seem quite strong, though even they droop during the middle of the day; three more will probably pull through if I keep watering them twice a day, and one is almost certainly doomed because it has been severely attacked by the Cabbage Root Flies. I have administered a good dose of "medicine" in the form of general-purpose plant food to try to build up their strength, so we'll just have to see what happens.

Elsewhere I have more potatoes nearing maturity, their "haulm" (foliage) now yellowing and beginning to die down: 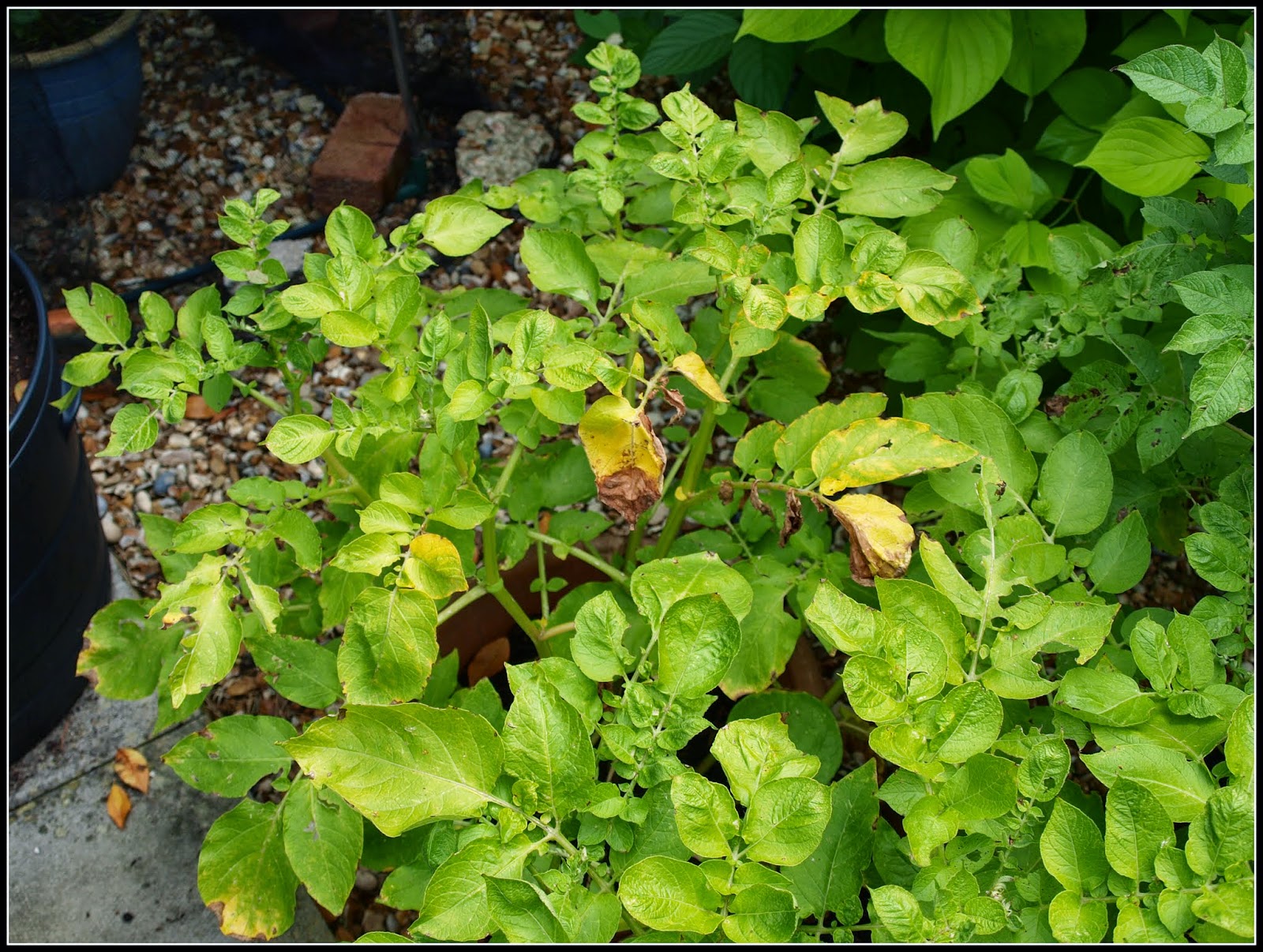 Those are a maincrop variety called "Nicola". It's not one I have grown before, so I can't tell you much about it - yet - but since all the other potatoes this year have been very good, I have high hopes that these will be too.

The other day I wrote about seeds which were not what they were supposed to be. Well, here we have another interloper - in a row of Beetroot have appeared one or two plants of Perpetual Spinach (the ones with the plain green leaves): 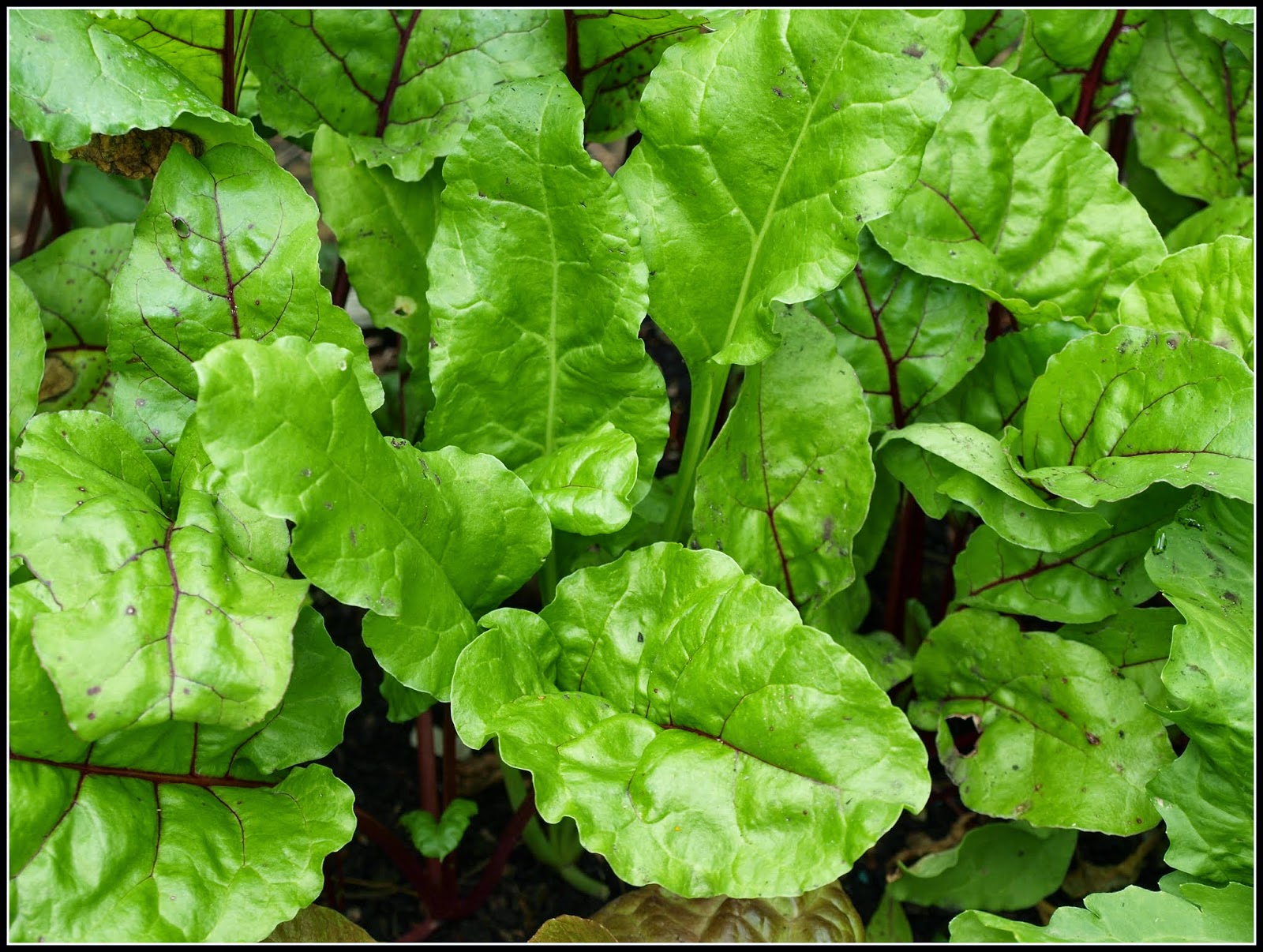 OK, Beetroot and Perpetual Spinach are closely related, and the seeds are very similar to look at, but... Actually I'm not worried about this, because although Jane doesn't like it and I therefore don't grow it any more, I do like it and a couple of servings of it just for me will be welcome.

This is more like it - an attractive trio of "Iznik" cucumbers. 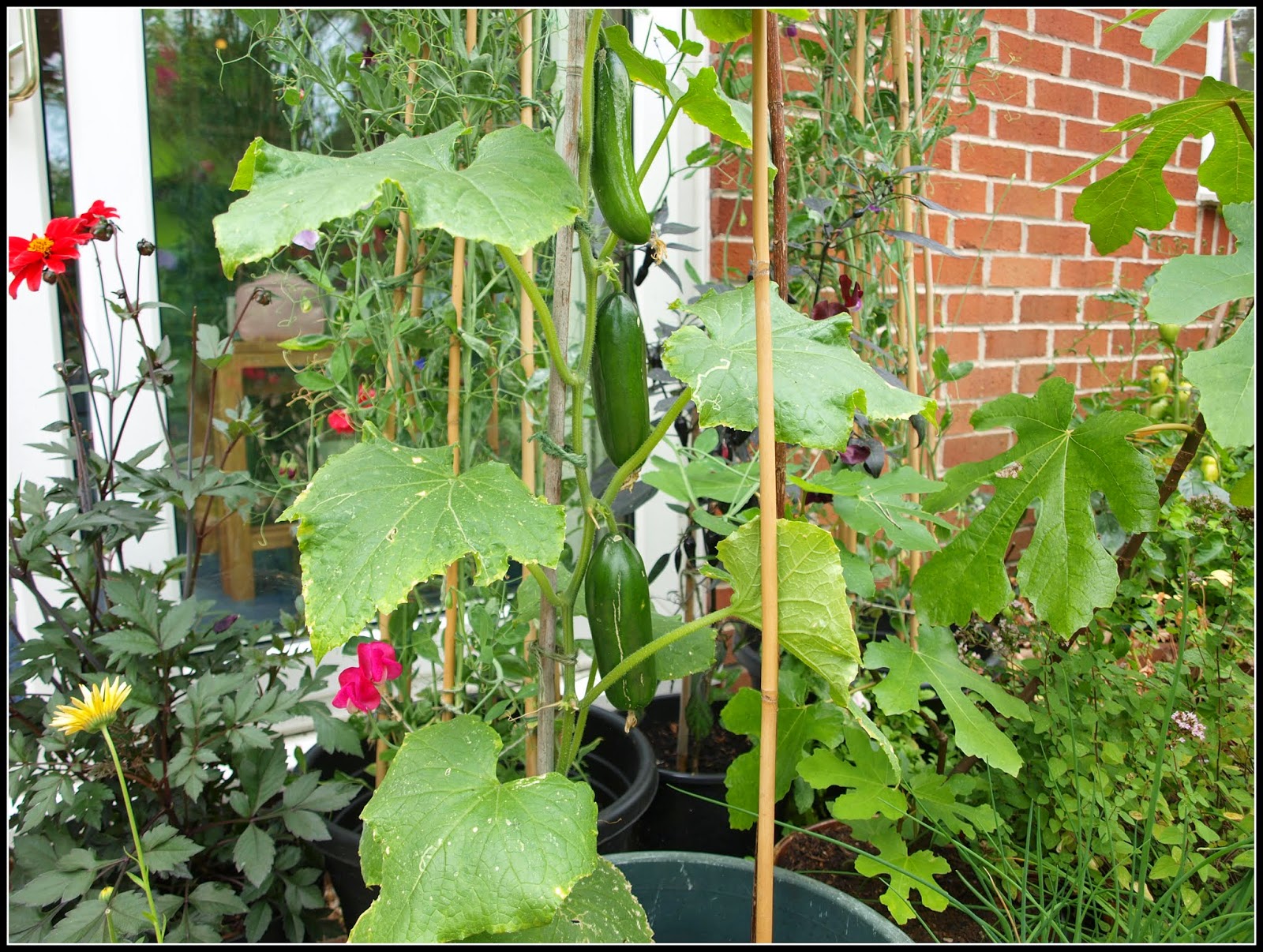 This plant is actually a spare one, planted-out when the other ones appeared to be in danger of not getting established at all, and for want of space it sits amongst the flowers next to the sliding door to our Living Room. Although perhaps not quite as prolific as courgettes, these cucumbers certainly deliver a good yield, and they don't take up much ground space.

Best news of all is that I have begun harvesting tomatoes. Most of them are misshapen, and many have Blossom End Rot, but there are still some good ones. More about these in a day or two... 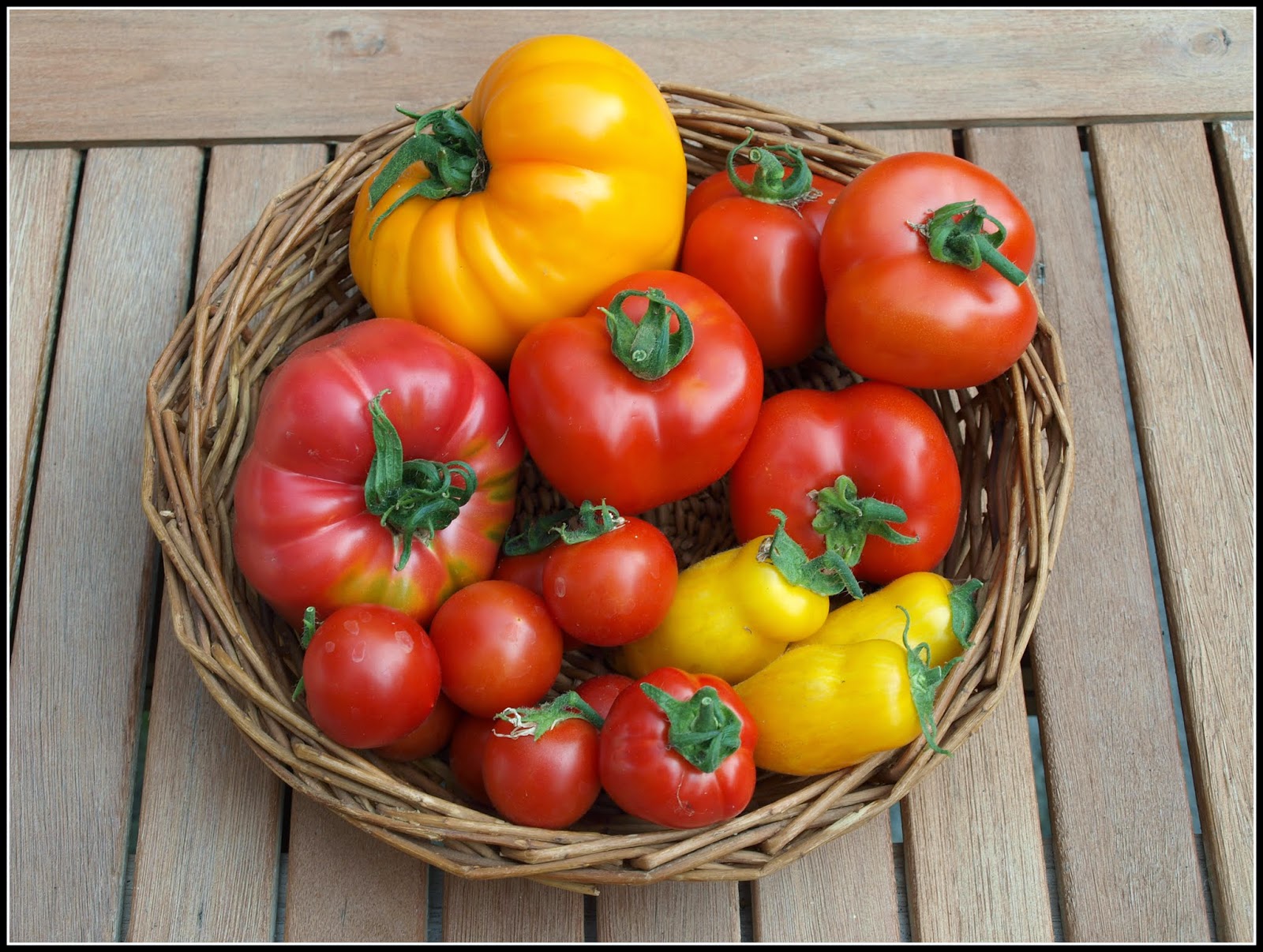