This is a dish I invented myself, using a number of ingredients of a vaguely Mediterranean nature - harissa from North Africa; feta cheese from Greece; polenta representing Italy etc. I was particularly keen to make a salad accompaniment based on home-grown French Beans - but more of that later...

The first thing to do was to make some polenta for the "chips". You need to do this well in advance (I did mine the day before) so that the polenta has time to set.  My advice is to make the polenta quite firm, then it will be easier to slice. Mine was a bit too soft this time, so I had to handle it very carefully. Some of the chips were a bit rough at the edges, but actually that's not such a bad thing, because it helps them to go crispy. 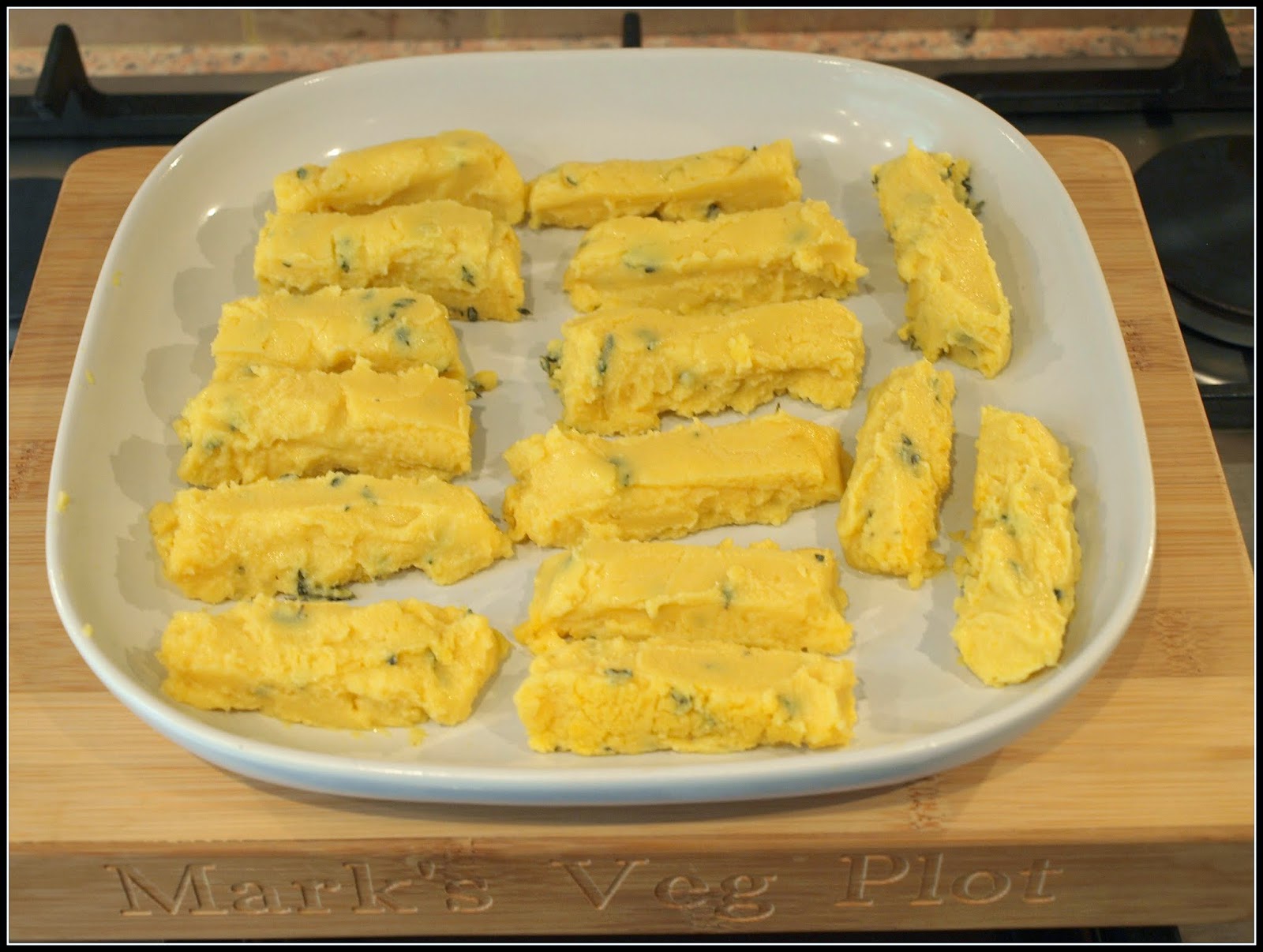 The little green flecks in my polenta are fresh Thyme leaves, by the way.
Another job to do well in advance is to marinate the lamb. I chose a butterflied leg of lamb for my dish. It's basically a leg with the bone removed, and with the meat flattened out into a single thin piece. I marinated the meat in a rub that I concocted from harissa, garlic and a load of dried spices, such as ground coriander, cumin, fennel and cinnamon. To give the dish even more of a Middle Eastern feel I threw in some Iranian barberries and a slack handful of Za'atar seasoning. I was determined that this would be a very tasty piece of meat! 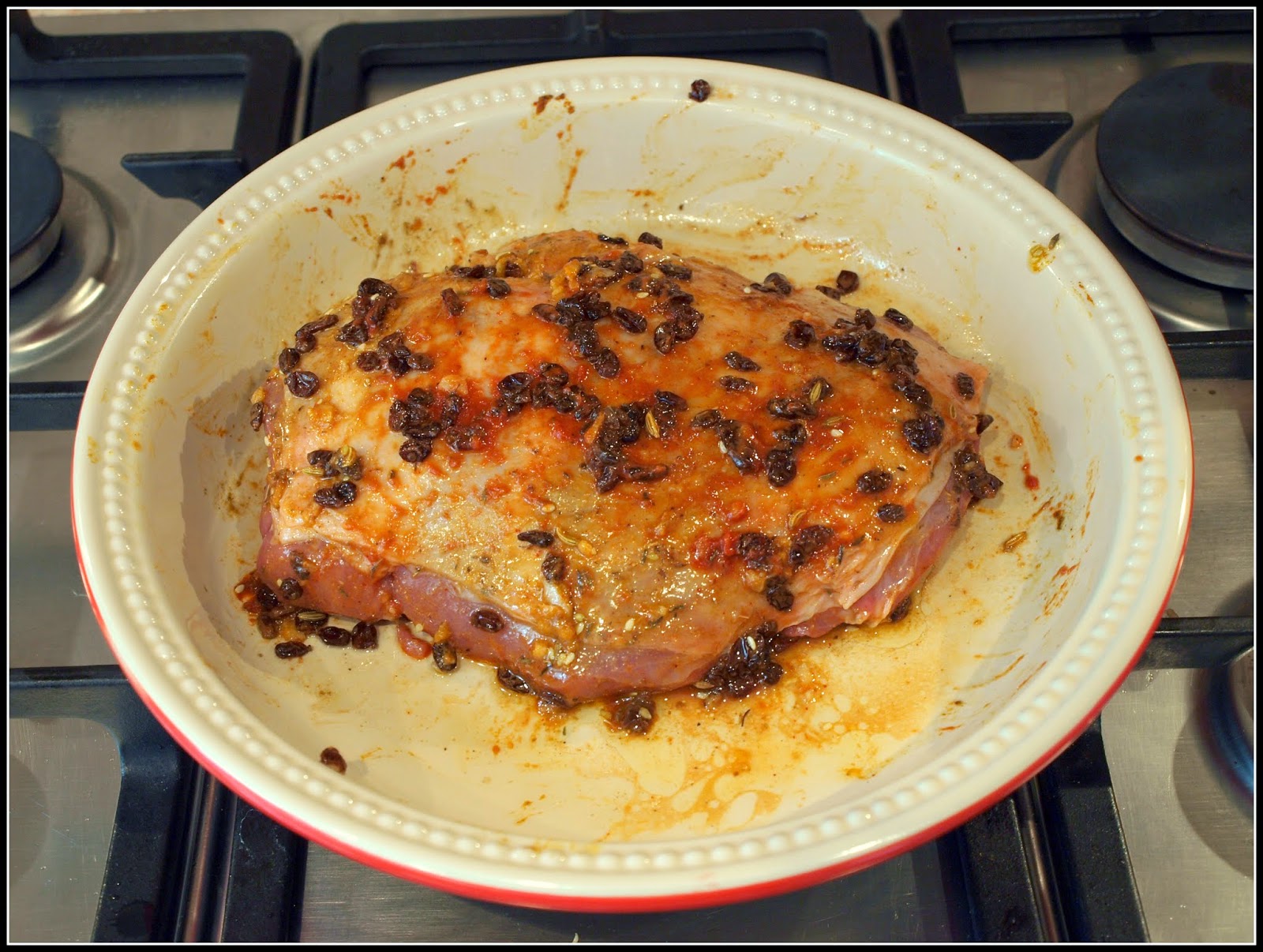 Vegetable accompaniments for the main dish were glazed turnips with caraway seed, and a salad of French Beans with feta cheese and chopped toasted Hazelnuts. I served the turnips hot, but the beans cooked and cooled, with a small amount of Hazelnut oil drizzled over them just before serving. The turnips were peeled, halved and parboiled before finishing off in the oven, smothered in Sweet Freedom (a fruit-based syrup used as a sugar substitute. It's particularly useful for diabetics.)

This meal is not one to do if you are in a hurry! I love cooking when I have plenty of time, so I spun out the preparations over quite a long period, and brought it all together with a flurry of activity just before serving-time. The meat was roasted in the oven, so that basically took care of itself, and when it was done I rested it while I cooked the polenta chips. This was really the only labour-intensive part of the meal because I had to supervise the chips carefully to ensure they cooked to a nice golden colour without burning. I had to turn them over a couple of times, which was not easy. I also made sure not to crowd the frying-pan, which meant I had to cook the chips in two batches and keep one warm while I did the other.
While the chips were frying and the meat was resting, I used the meat juices in the roasting pan to make some gravy: 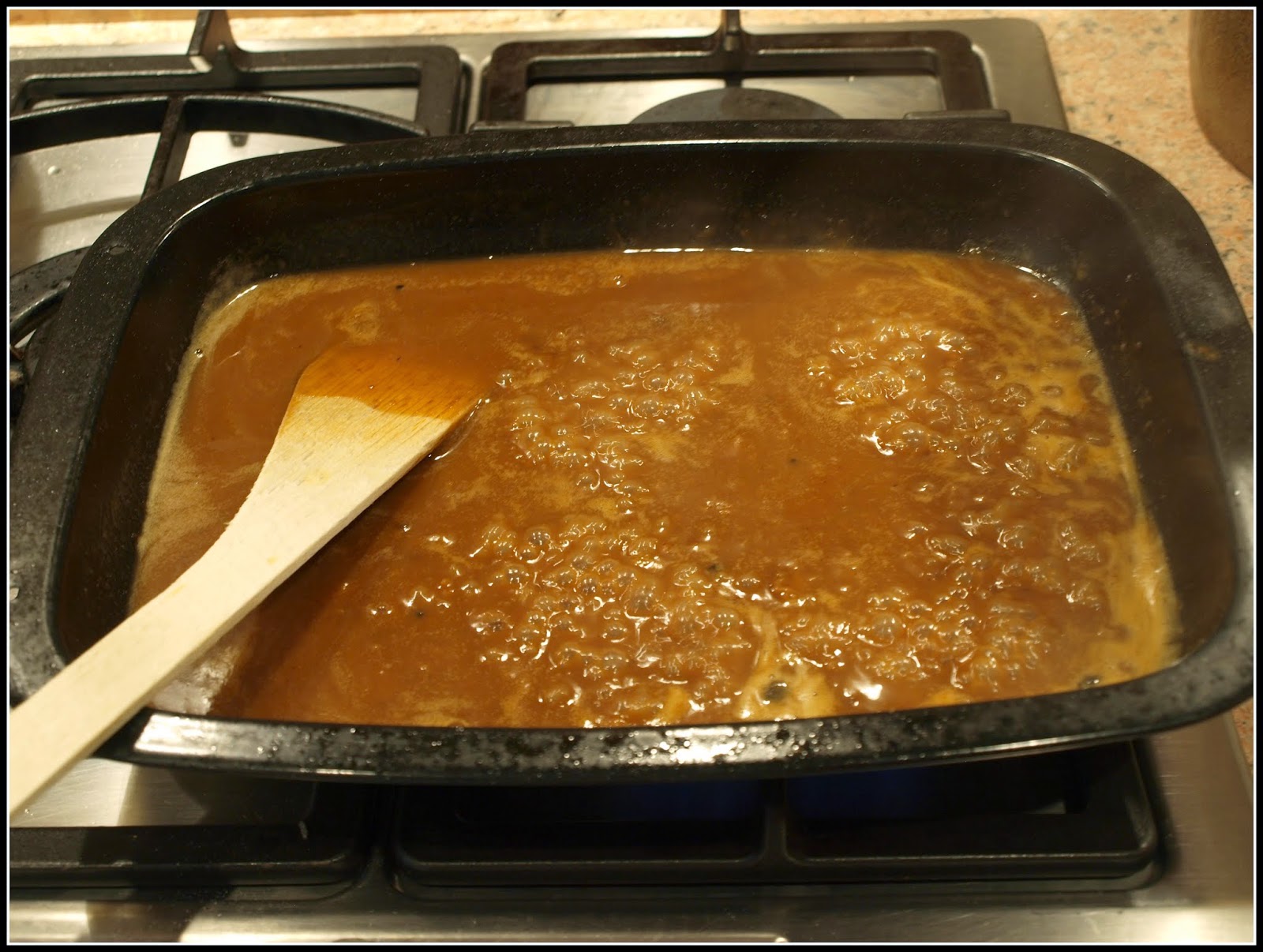 In my opinion, a dish of roast meat is incomplete without gravy!

So here is the meal plated-up: 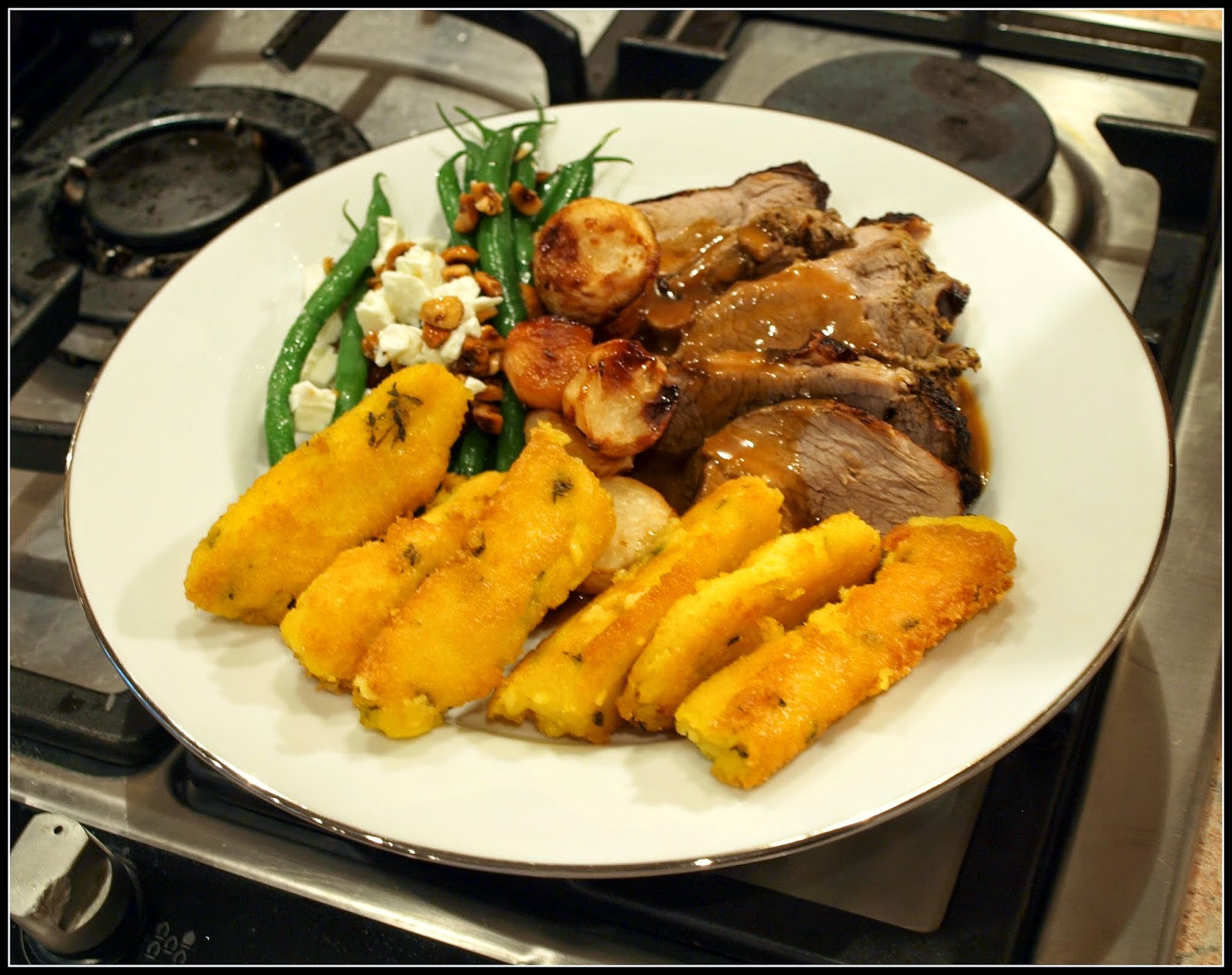 In retrospect I see that I have given the polenta chips pride of place. It looks like a massive quantity of them, but let me assure you they are really light, and it is easy to eat lots of them. 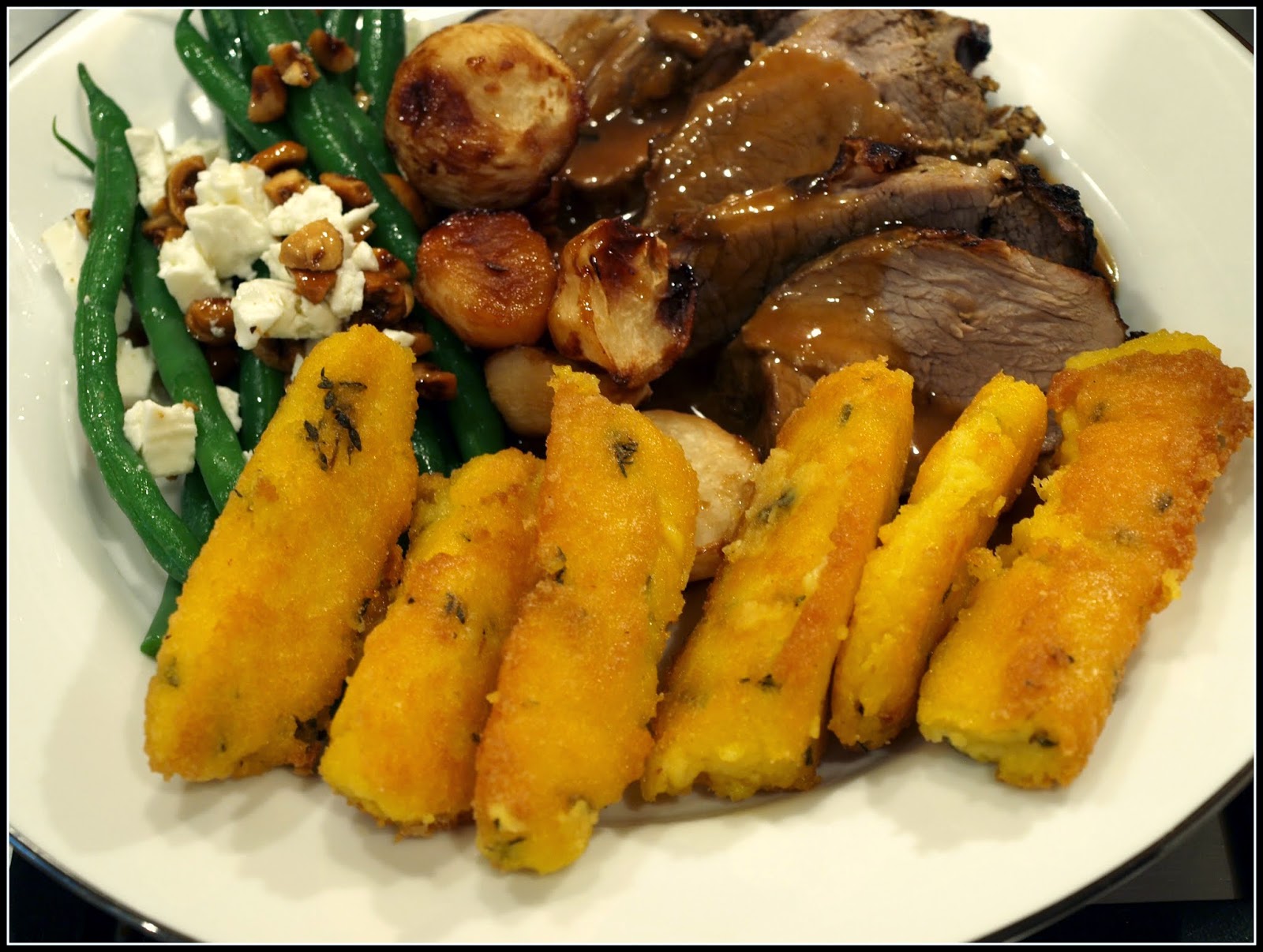 In fact, if I just had a bowl of those polenta chips and a jug of gravy, I'd be a happy man! I was particularly pleased that Jane remarked how good the gravy was, because in our family she is recognised as the Gravy Queen, and her gravy is what everyone else tries to emulate.
﻿
﻿
Posted by Mark Willis at 12:00