Some thoughts about leaf-mould and compost

Autumn (aka Fall) is unquestionably the time of fallen leaves. 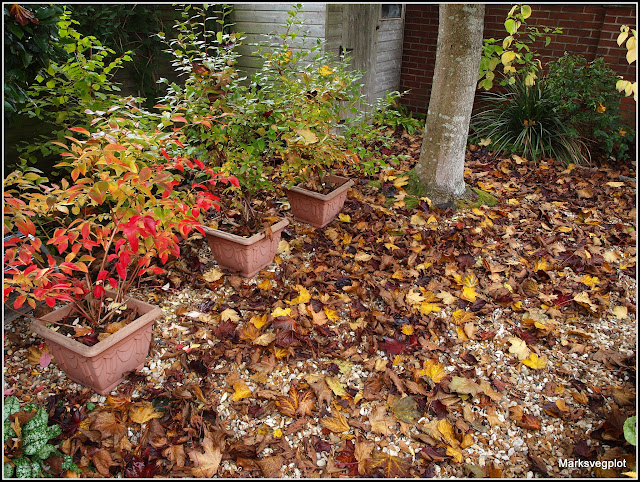 So, are fallen leaves a PITA or another form of harvest? If you just leave them where they have fallen, they will over Winter degenerate into a soggy, slippery mess which can choke any plants that lie underneath and deprive them of air and light. It's better to remove them, even if you then dispose of them - perhaps taking them to the Council recycling facility to be composted.

Alternatively you could compost them yourself, making what is generally called leaf-mould. The trouble is, fallen leaves take a long time to decompose - at least a year, more like two. You can speed the process somewhat by chopping the leaves and keeping them wet. If you have a leaf-sucker / blower machine, this will probably be able to chop the leaves for you as it collects them. A word of advice here: if you are going to use one of those machines, use it when the leaves are dry, otherwise it will clog-up very quickly (the voice of experience talking here!). The chopping of the leaves reduces the space they occupy too, which is an important consideration when you think how many leaves can come off just one tree!

Some people advocate storing the leaves in black plastic sacks with ventilation holes punched in them. I have tried that and it didn't work very well. I prefer to use a conventional "Dalek-style" plastic compost bin. The trouble here is that one is not really enough, even though I have only 4 trees in my garden, of which only one could be described as big. Each year I cram into it as many leaves as I possibly can, having removed some of the oldest material from the bottom layer. The remainder go to the Tip.

Now the most important consideration: why am I saving the composting / composted leaves anyway? Their nutritional value is not high. Their use is primarily as a "soil-conditioner". What is normally meant by this is that they will lighten your soil by allowing it to hold more air, and to drain more easily. For me this is of scant value, because the soil in my garden is naturally light and sandy. I am forever striving to add to it more "bulky organic matter". For this reason, I do not use large quantities of leaf-mould. I do sometimes spread a layer of it on top of my raised beds, because I think this helps to suppress weeds and maintain soil moisture. It also feeds the worms!

Of greater concern to me right now is the problem of what to do with the compost / soil in which I earlier grew my tomatoes. Those of you who follow my blog regularly know that I have had problems with contaminated compost. This year it was less severe than the previous two, but I'm fairly sure that the (relatively mild) damage was caused by residual contamination in my home-made compost. This year I have been very careful not to put any tomato material into my compost bins. It has all been taken to the Tip. However, I am now faced with this: 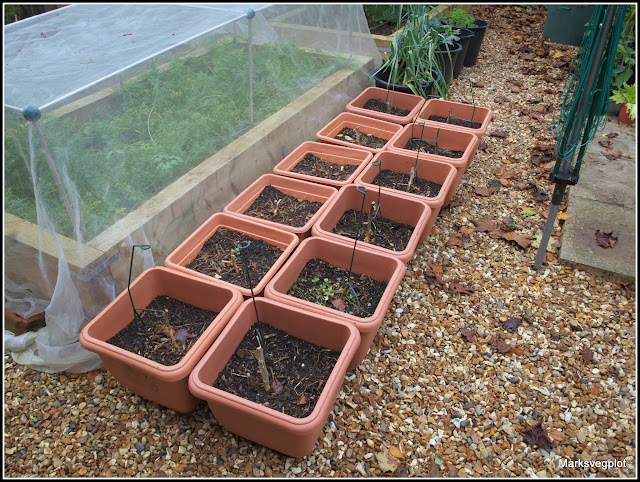 Actually, it's worse than that. I have 17 containers to empty, of which 5 are not visible in the photo above.

There are a number of options:-
Option 1. Take a chance on it, and spread the compost over the raised beds. 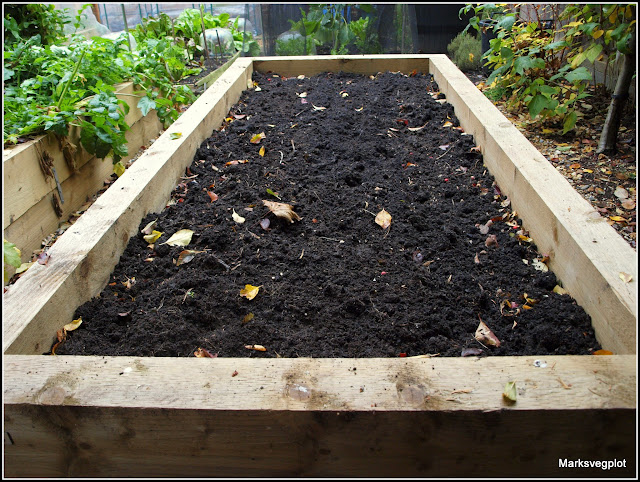 In theory, the weedkiller responsible for the contamination breaks down over time, and now (3 years on) may be much less virulent than it was. The manufacturer optimistically states that the chemical will break down in about a year, but I know this is not true. Putting the compost into the raised beds would be a relatively easy task, but it would be a one-way trip: if the contamination proved to be too severe, it would not be possible to rectify the problem without removing the entire contents of the raised beds and starting again. I therefore discount this option.

Option 2. Put the used compost into bags and take it to the Tip. A messy and laborious job, necessitating at least two trips to the Tip. Also, this carries the risk of passing on the contamination to other people because the Green Waste from the Tip gets recycled into commercial compost. This option is a possibility.

Option 3. Spread the compost over the ground at the bottom of the garden, under the Cockspur Thorn tree, near where my leaf-composting bin is. This area gets practically no rainfall or direct sunlight, and almost nothing will grow there - although some Comfrey seems to manage. Here it could sit without doing any further damage, and the contamination would slowly fade. [NB: the clopyralid weedkiller affect some plants a lot more than others, and many plants would be unaffected.] Next year I would of course start again with fresh new compost for my tomatoes, hoping fervently to get un-contaminated compost this time! This sounds like a viable option.

I haven't finally decided what to do, but Option 3 is the favourite at the moment.

I still have some containers full of soil (the Norfolk Loam I bought) and compost (Sylvagrow) in which I grew potatoes, and then subsequently beans, without any apparent problems. 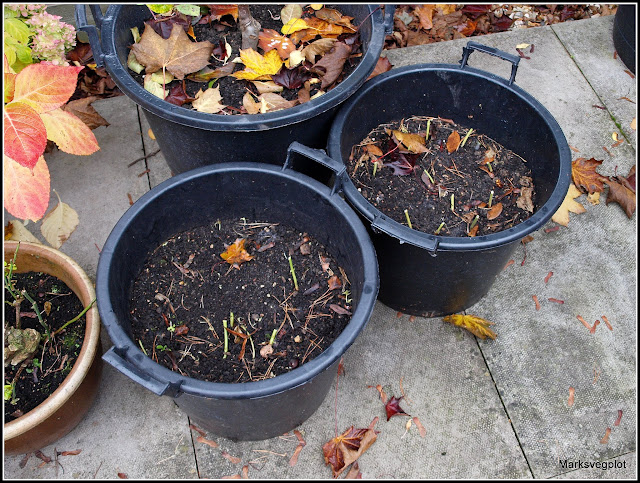 This mix will be added to one of the raised beds, and I don't anticipate any problems here. Neither potatoes nor beans showed any signs of weedkiller damage, and they are two of the plant types most susceptible.

I still look back to the Good Old Days (prior to the major weedkiller contamination in 2014) when each year I used to simply tip the compost from the tomato containers into the raised beds. It seemed like a natural progression. Each year I would buy new compost for the toms, and each year it ended up on the beds. That system has been suspended for the last three years. Will it ever be re-instated, I wonder?
Posted by Mark Willis at 12:00