While I was at Victoriana Nursery Gardens for the chilli festival at the weekend, I took the opportunity to purchase another apple tree. Victoriana has a small but interesting range of fruit trees for sale, most of them being the sort of "old-fashioned" traditional types, as opposed to the new-fangled modern varieties. I think this is a good sign. In my opinion, if a type of plant has successfully survived for decades, possibly centuries, then that probably means it's a good one.

The apple-tree I bought was a "Laxton's Superb", described as "often likened to Cox, but in reality has better flavour and keeping qualities - bigger too!" 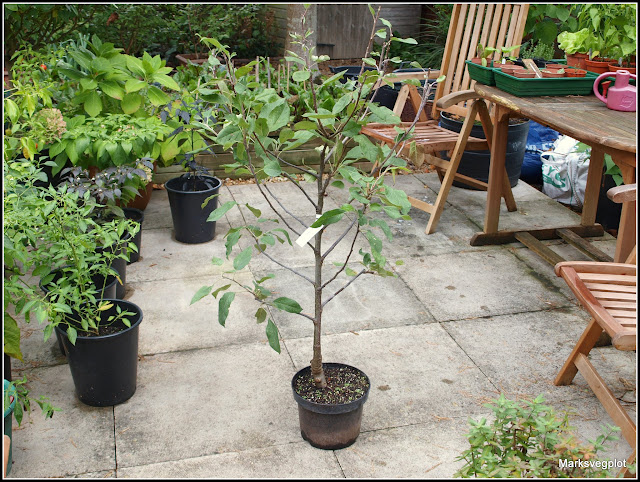 As you can see, I bought a container-grown specimen, though in a month or two the bare-root ones will be on sale too. I was particularly pleased to be able to get such a well-pruned specimen. The young tree has a really good shape already. According to the RHS, a tree of this type could grow to an eventual height of 8 metres, but I'm not going to let mine do that. I shall prune it such that it never gets more than 2 or 2.5 metres at most.

Due to the nature of the soil in my garden (hard, dry and sandy), I shall be growing this tree in a big (60-litre) container. In fact I have already planted it in one... 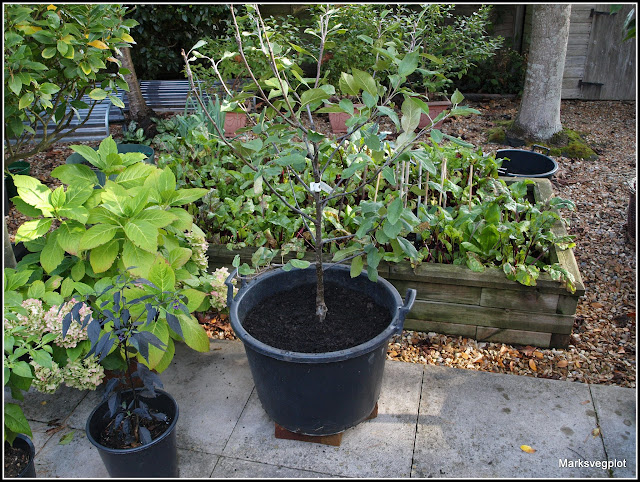 Following instructions from the supplier, I have used ordinary loam, enhanced with just a little commercial compost, and I have added no fertiliser, manure or bonemeal. I haven't yet decided exactly where this container is going to stand, but I'm going to over-Winter it on the patio. To help with drainage I have stood the container on some bricks.

One of the main reasons I have bought this tree is to provide a pollination partner for the one I got this time last year (the "Winter Banana" one). "Laxton's Superb" is supposedly self-fertile, but yields will be maximised by fertilisation with another apple tree. The "Winter Banana" tree is not self-fertile, and although it is growing directly below the overhang of my neighbour's huge apple tree, I want to be able to ensure the best possible conditions for both of mine.

The "Winter Banana" (grown in an exactly similar plastic tub) has looked really strong throughout the year. 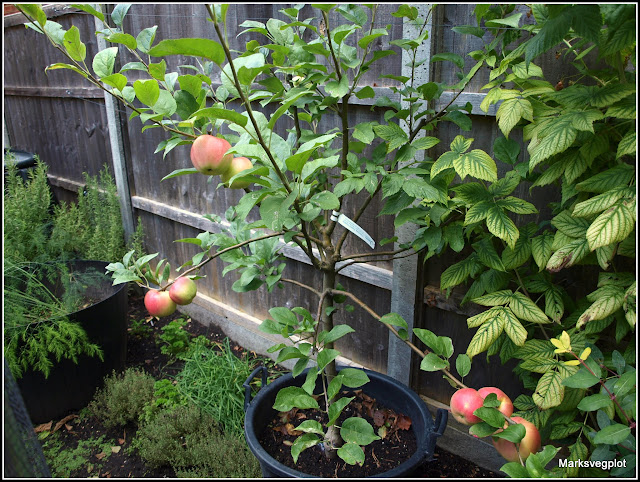 It produced quite a few small fruits, but most of them dropped off in the so-called June Drop, leaving only 8 to grow to maturity. They are now very big apples. 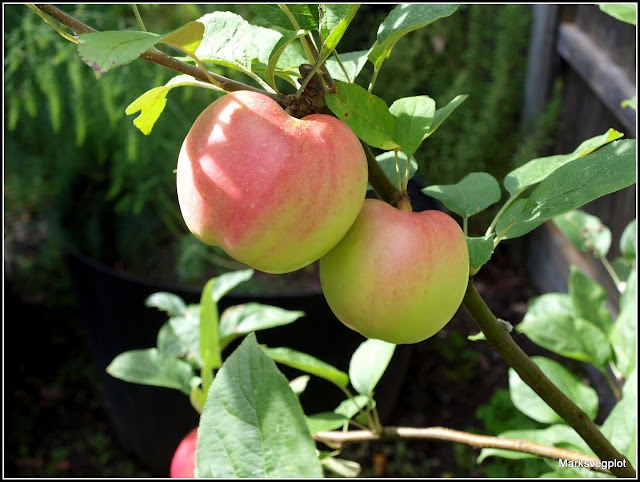 I haven't eaten any of them yet, because this is a late-season apple, best picked in November. I tested a couple at the weekend though. The way to do this is to cup the fruit in your hand and twist gently. If the apple is ripe it will come off easily. Mine didn't, so I'm leaving them a bit longer.
Posted by Mark Willis at 12:00