On Sunday I participated in a Fungi Walk, organised by the Countryside Rangers department of our local Council. It took place on Odiham Common, an area of woods and grassland rather similar to our Velmead Common here in Fleet - except that Odiham has a lot of oak trees and Velmead has mostly  pine and birch. 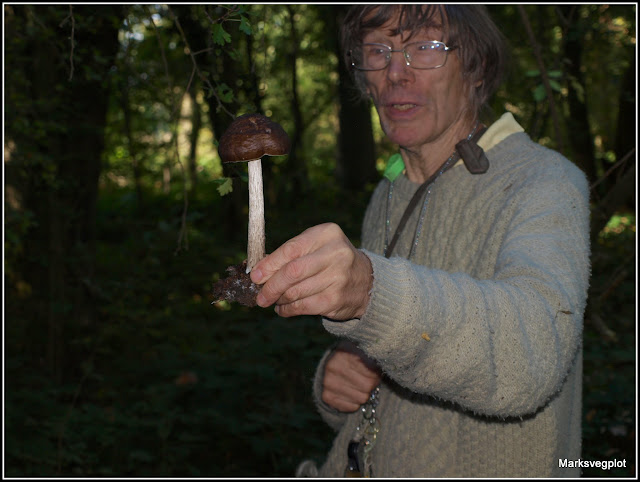 Having never attended anything like this before I was unsure what to expect. I sort of hoped that the fungi guru would point out some choice specimens of interesting fungi that he had previously spotted and marked for our attention, helping us to understand the features and characteristics of each. In the event, I came away a little disappointed, because I felt that little or no preparation had been put into the proceedings. Things got off to a bad start when the Ranger chappie arrived late, and it soon became evident that no liaison had taken place between him and the Expert. No route for the walk had been planned; no fungi species had been marked for demonstration; no introductions were made (I still have no idea what are the credentials of our guide!). As a group (there were 13 "customers" and 3 "staff") we just drifted off into the woods without much idea what was supposed to happen...


What did happen was that members of the group searched around and found fungi of various sorts and brought them to the guide for possible identification. No attempt was made to ensure that everyone benefitted from the knowledge imparted. Our guide was evidently very knowledgeable about fungi (especially their Latin names!), but I didn't think he was good at putting across his knowledge. It would have been better if HE had shown US the fungi, not the other way round! A good illustrated fungi handbook to help with identification would have been an asset too, and maybe some printed handouts with pictures of common fungus types and their features and characteristics. I won't say the event was bad (and it only cost £3.50), but I did feel that more could have been made of it. Having worked as a Lecturer / Trainer for 12 years, I know that there is more to being effective than just knowing your subject. Organising-ability and people-skills are important too.


Much of the time we were in the woodland, where light levels were low, so I didn't take many pictures. I'll show you the few I have, along with some others I took the previous day in Basingbourne Park, closer to home.


The following photos were taken in Basingbourne Park.


Seen by the roadside, a quarter of a mile from my house.


P.S. Whether this fact is related to the above or not I cannot say, but yesterday we ate our first-ever foraged mushroom - and we are both here still to tell the tale! It was only one, but you have to start somewhere.


Note: This mushroom did not come from Odiham Common.
Posted by Mark Willis at 12:00