If you're not interested in chillis, I suggest you read no further, because this post is entirely about chillis... :)


All of a sudden, there is a lot of progress amongst my chillis. Pods which have been green for weeks are now colouring-up left right and centre, and plants that had hitherto been reluctant to set any fruit have finally joined in the party. They may be too late, but that's another story.


Here is "Nigel's Outdoor", first plant to set fruit this year, and nearly the first to ripen. 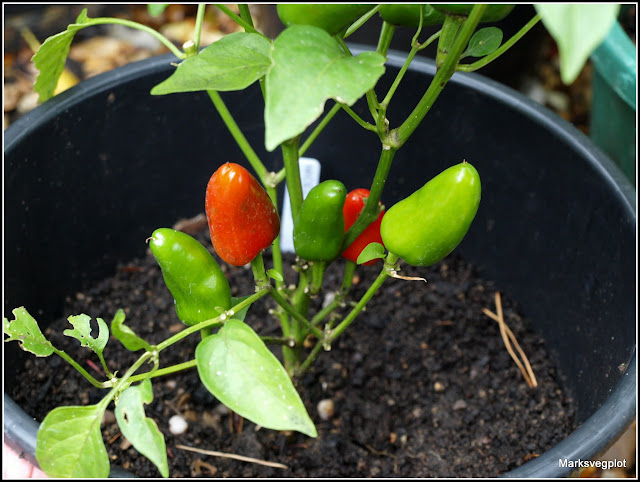 The impressive dark-coloured foliage of "Pimenta Puma" can no longer hide the array of little amber jewels... 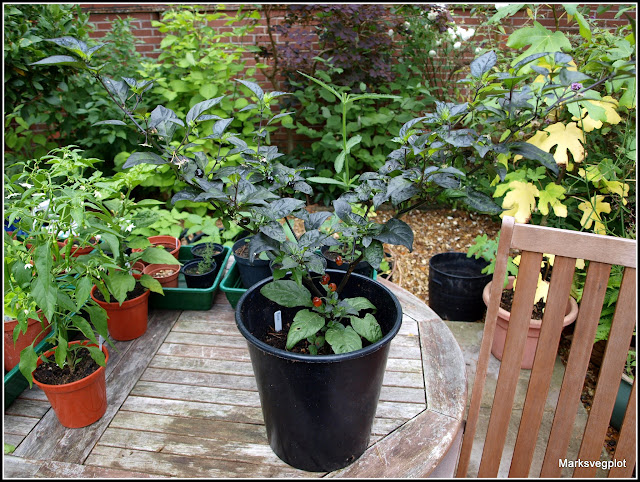 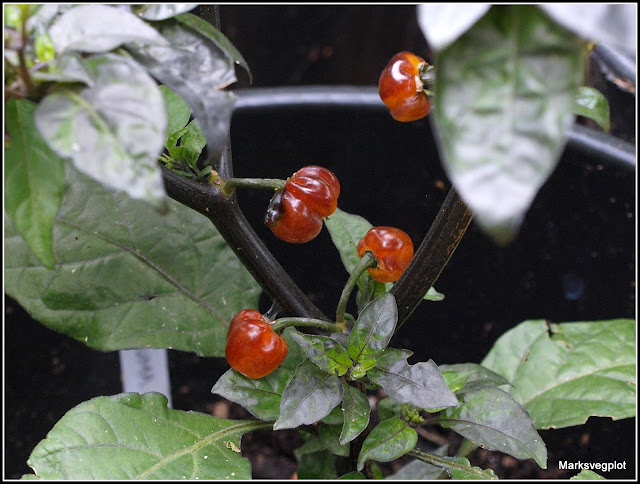 "Alberto's Locoto" has not done as brilliantly as last year (this plant was over-Wintered), but it now has about 9 or 10 oval fruits, the largest of which is about the size of a hen's egg: 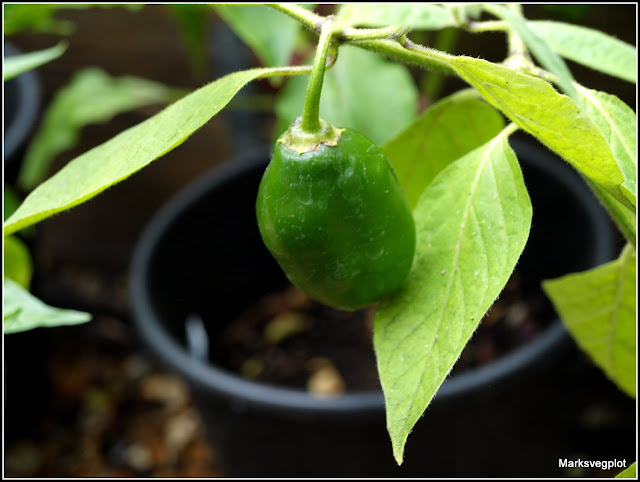 When I posted about this unidentified purple chilli the other day someone said they reckoned the fruits would turn red. It looks as if they are right. You can see they are changing colour. 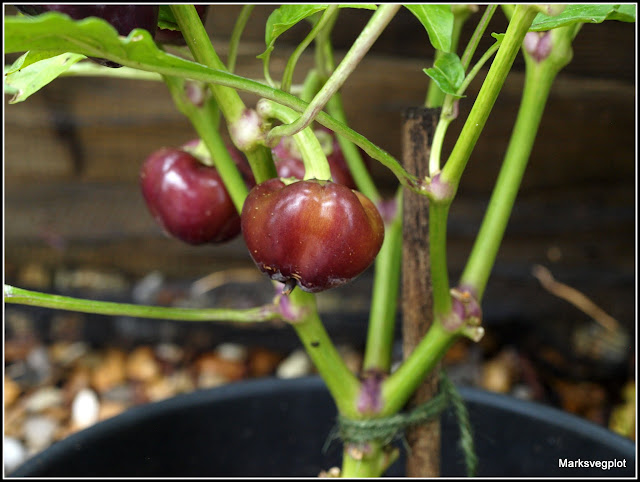 This is the one that I described a while a go as being camouflaged. The fruits were black-and-green but now they are mostly plain black. I don't know its name - probably a spontaneous hybrid from the previous year. 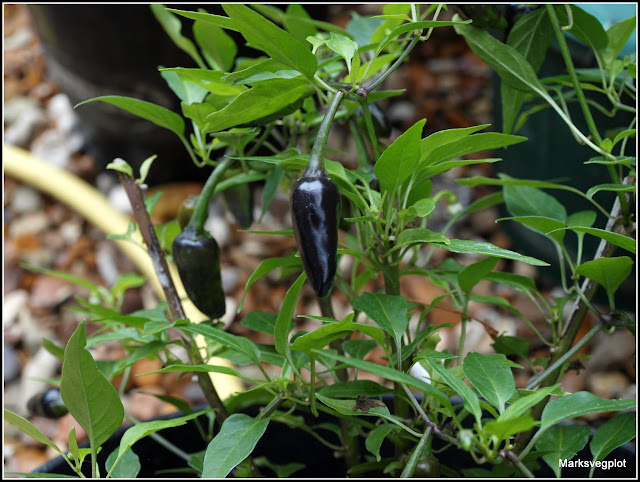 "Piment d'Espelette" - mildest of mild chillis, but a good-looker. 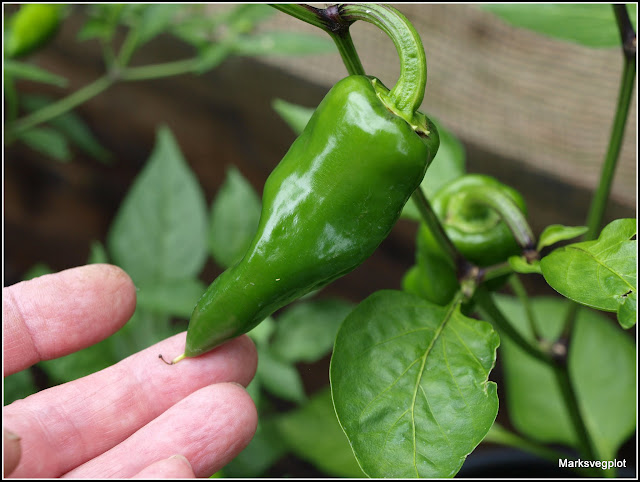 "Aji Limon", probably my favourite chilli of all. These pods are not yet ripe, but I think they are not far off. 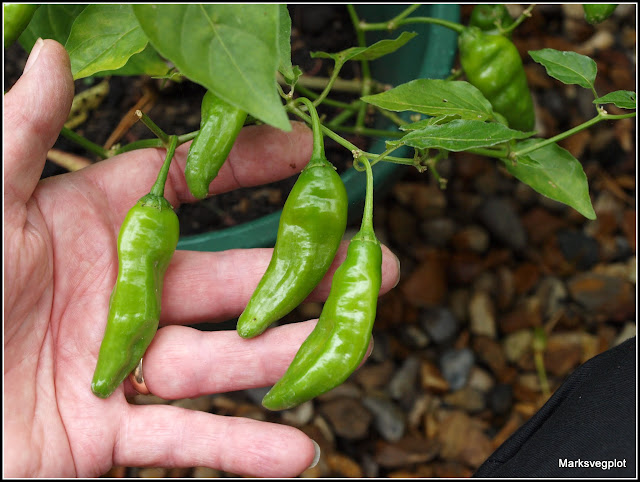 "Purira", leading the field in terms of ripe fruit. 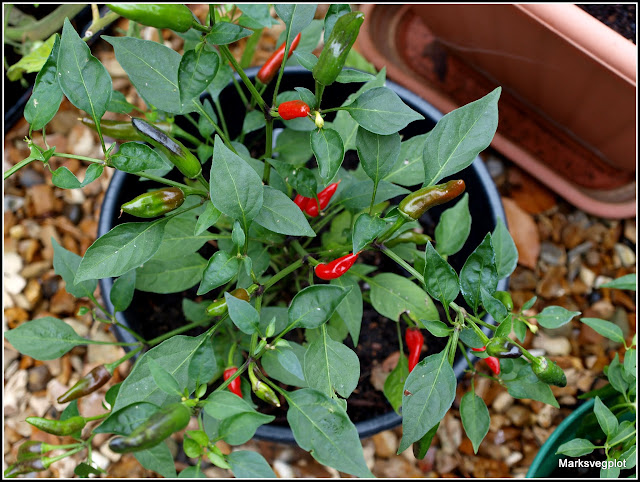 Finally! Some little fruits on the Red Habanero. I don't hold out much hope of them ripening, but you never know... 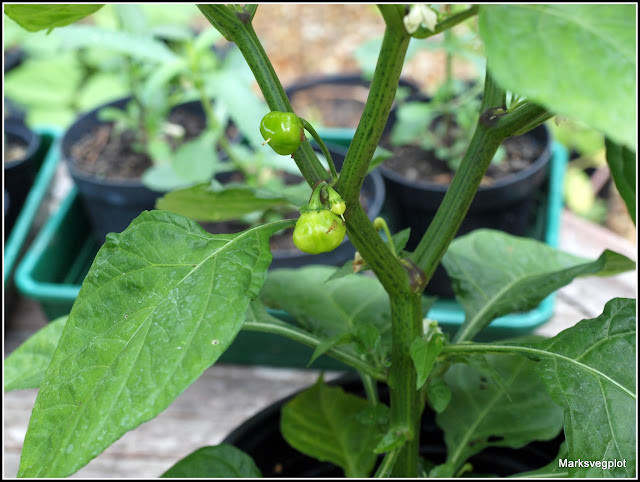 "Orange Habanero" is at about the same stage. Several fruit, but very tiny. 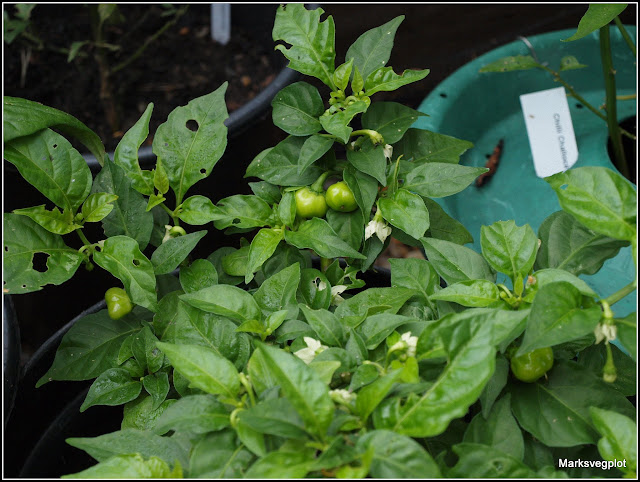 On the other hand, "Cayenne Thick" has lots of big gnarly fruits: 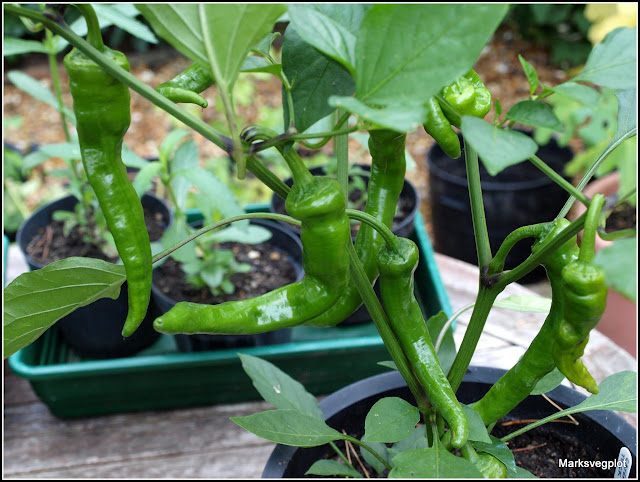 Some of them are a little uncertain which direction to go in... 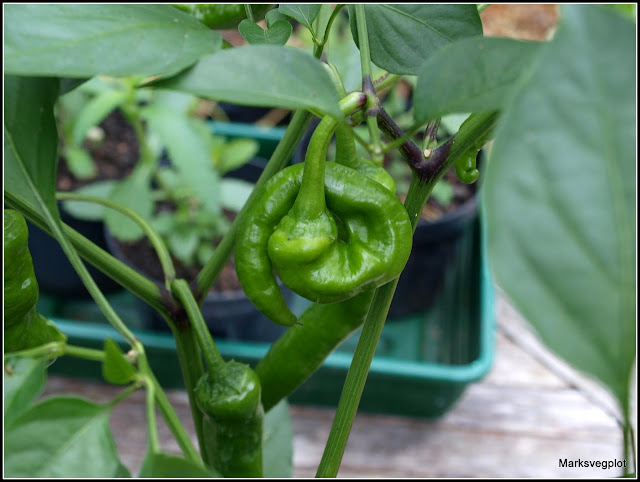 I'm particularly pleased with this one, which I call "Cozumel" (because I grew it from seeds brought back from Cozumel island in Mexico). Despite being a late starter, it now has a fair number of fruits on it. 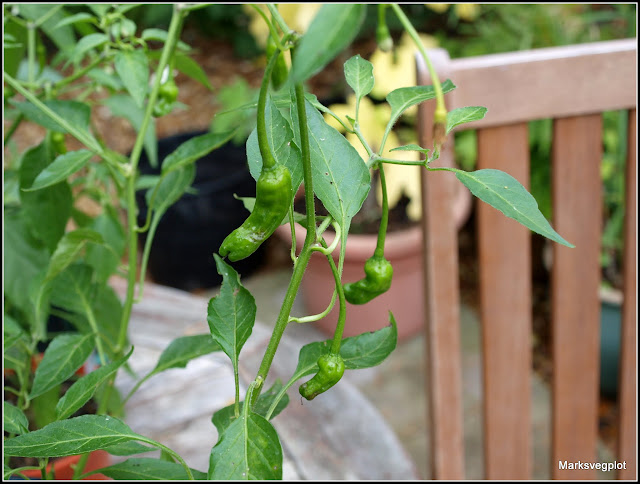 Likewise, there is a certain amount of satisfaction involved in having grown these. Tiny fruits, granted, but fruits nonetheless, on a plant grown from seeds my daughter sourced in Panama. 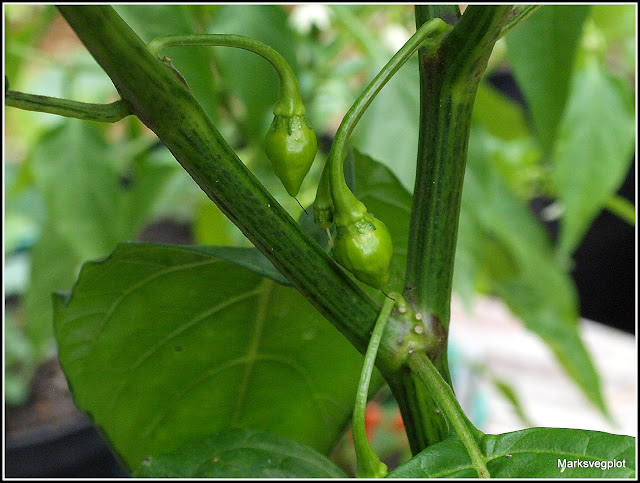 I managed to grow 3 different Panama chillis, but one of them has been an exceptionally slow grower. It's still only a few inches tall. A candidate for over-Wintering, maybe? 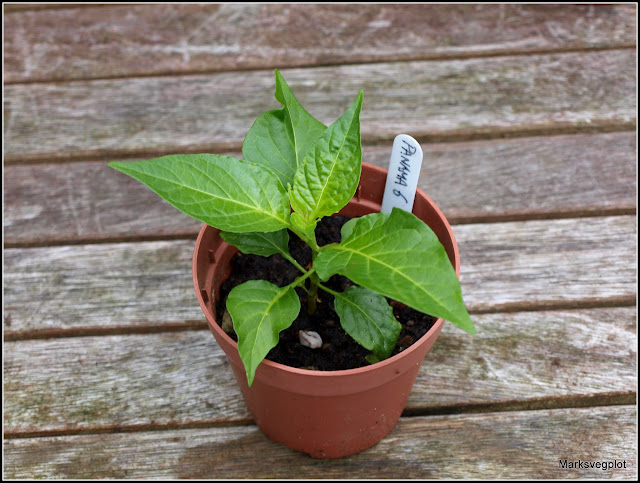 This is "Serrano", with its intensely dark green fruits, reminiscent of the Jalapeno: 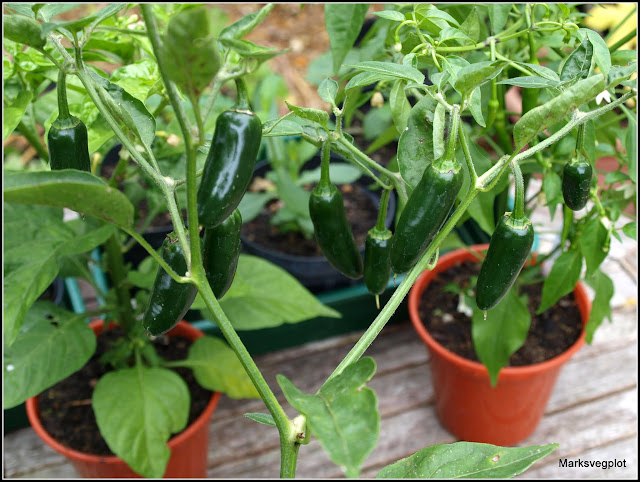 Over-wintered from 2015 is this "7-Pot Brain Strain", doing better than before. It has 6 or 7 fruits, one of which is clearly ripening. 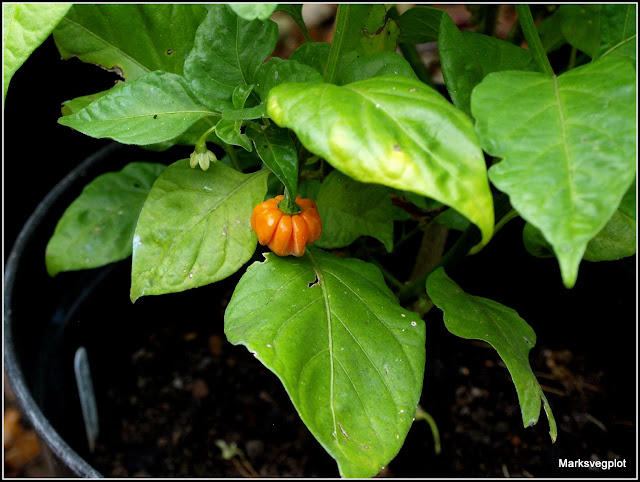 This is another one that almost certainly won't produce ripe fruit this year - "Jay's Peach". At least it has some flowers, which means it did better than last year. I'm comforted to know that other chilli fans reckon this to be one of the latest to get going. It would probably be OK in a greenhouse. 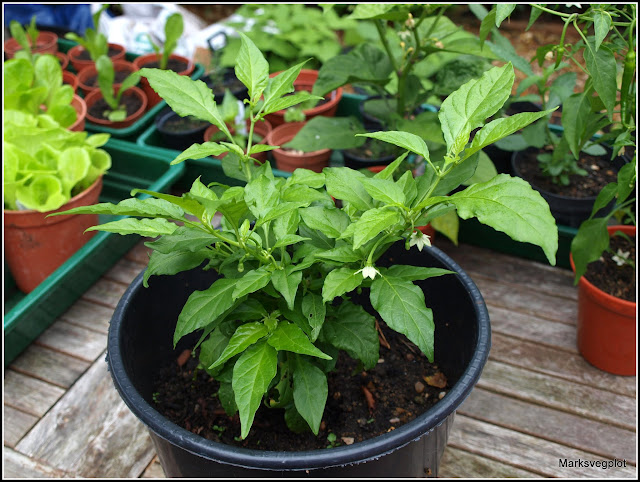 In the same category is "Cheiro Roxa". At least this one has some tiny fruits though. Chances of ripening before the frosts? Probably about 5%. 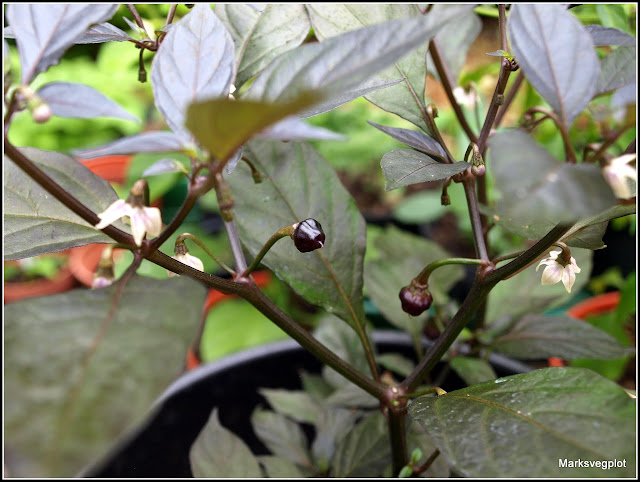 The experimental "Challock Chilli" is coming along nicely. Hopefully there will be some ripe fruit for me to take along to the Challock Chilli Fest at Victoriana Nursery Gardens on 1 & 2 October. 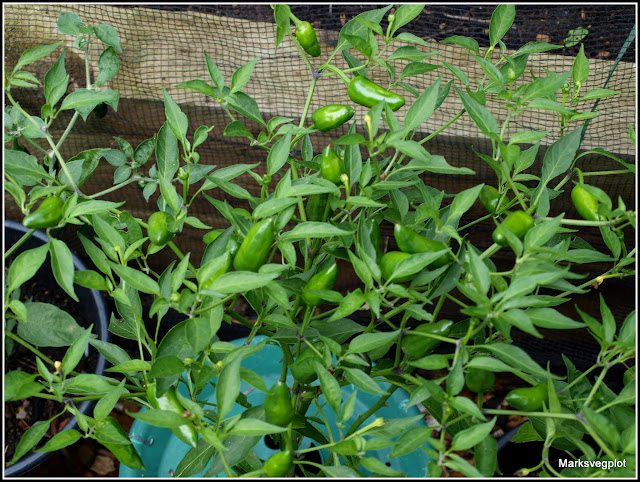 "Devil's Tongue Chocolate" can't decide what shape its fruits ought to be... 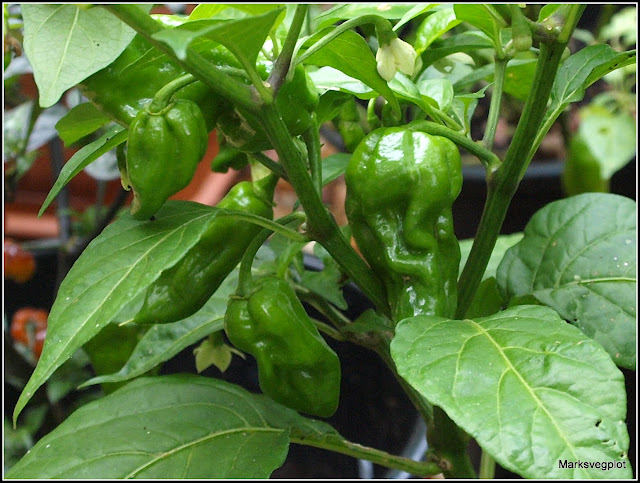 They are borne on a nice sturdy plant with a good structure. It has recently produced another flush of flowers on the "top storey": 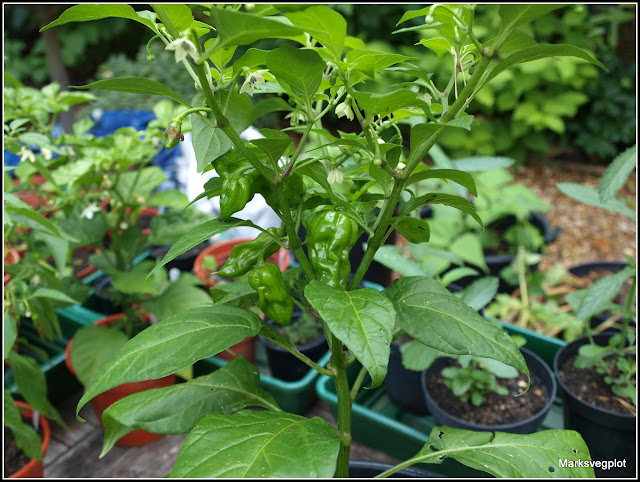 I'm going to end with "Turkey, Small, Red" (a nickname of course), performing as reliably as ever. I love this variety more than anything else for its "faithfulness". Despite the close proximity of other potential pollinators with which to hybridise, it comes back just the same each year. 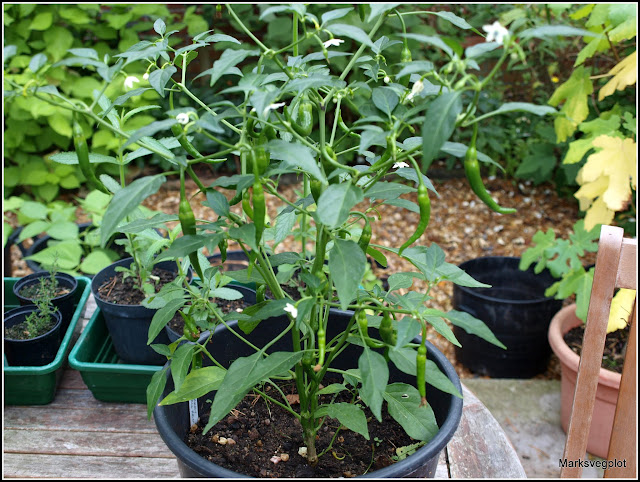 I have three plants of this variety. This is what a typical fruit looks like: 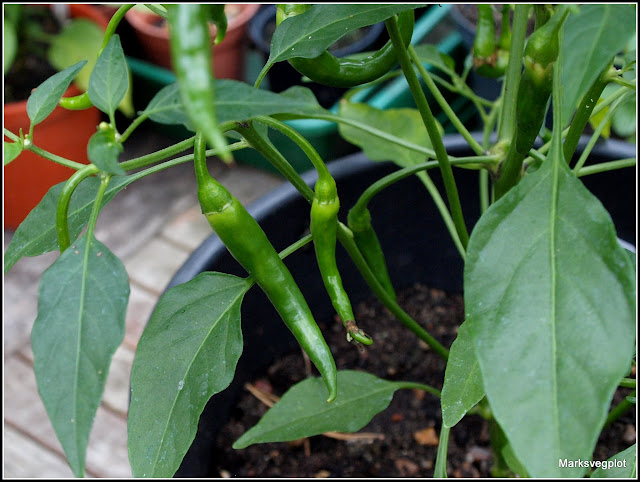 In this post I have illustrated most, but not all of my chilli plants. Given a few more days of sunshine (and the weather forecast for the next few days looks fairly promising), I think that most of them will produce ripe fruit. Maybe in a week or two I'll be able to post some photos of a whole basket of ripe chillis? I am certainly aiming to do so!
Posted by Mark Willis at 14:00