My liking for Runner Beans is well-known, but each year I grow a few other beans as well, just for variety. One type that I have grown a few times (including this year) is the Borlotto bean "Firetongue". 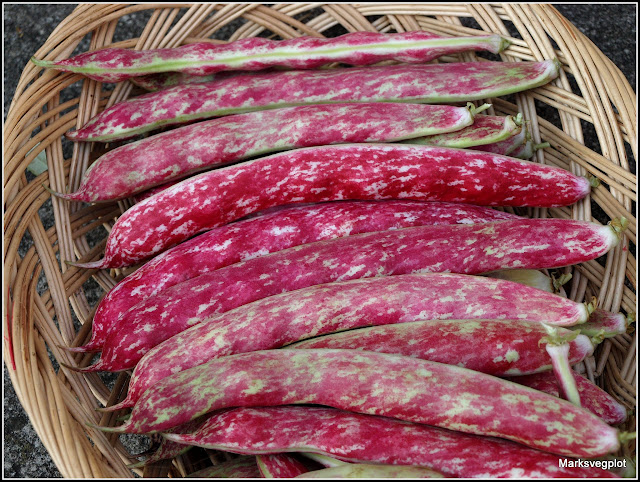 This variety is available in two versions, one of which is a low-growing type (I hesitate to use the term "Dwarf"), and the other is a climber, so if you are planning to grow it, make sure you get the right type! I have always grown the climbing type, simply because in my little garden I think it represents better use of the ground space.

Borlotti are grown in exactly the same way as Runner Beans. I sow mine in pots in the Spring, and plant them out alongside the Runners once the fear of frost has passed. Aftercare is simple, consisting principally of ensuring the plants get lots of water. This year I only had four plants, and to be honest they got a bit swamped by the Runners. Growing them on a separate support-frame would probably be a better idea. Still, I wasn't really aiming for a big yield, just something colourful. I think my four plants will probably produce a total of about a kilogram of pods.


Borlotti can be used in a number of ways. When they are really small you can eat the pods just like you would a Runner Bean, but you'll get a bigger harvest if you let them mature.


Young Borlotto pods are plain green, and as they get older they develop their distinctive red splashes. The redness is very much influenced by the amount of light they get, as I can demonstrate here. Look at this pair of pods - the outermost side of each pod (exposed to the sunlight) has a lot of red on it already. 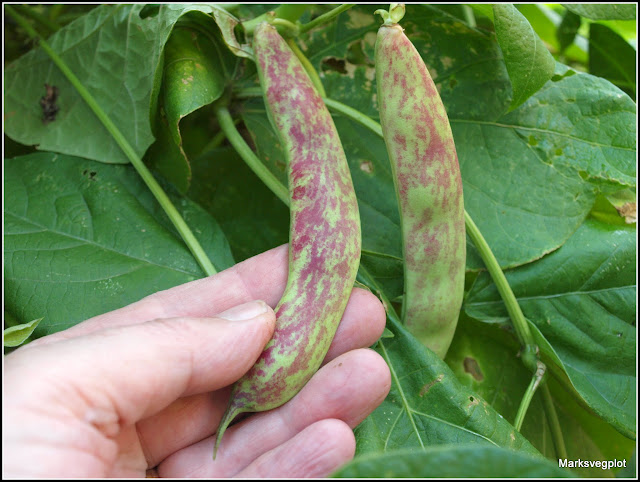 Turn them over though, and the shaded side is still plain green. 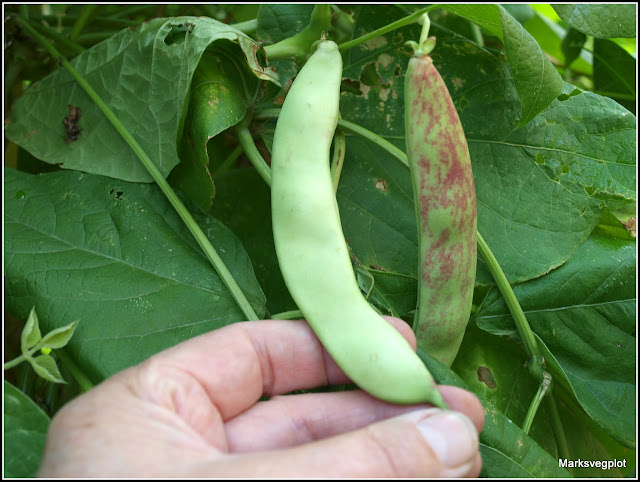 I prefer to leave the pods until they are a fairly bright but deep red colour, which tells me that the beans inside will be ready for eating as "Shelling Beans". 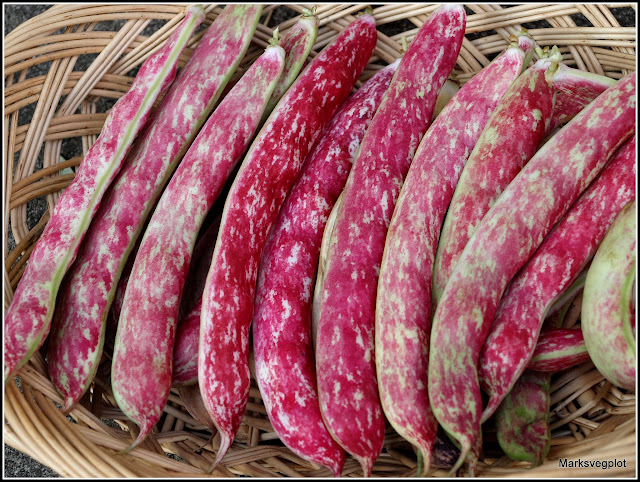 The beans inside will be "green" (not in colour terms, but in terms of maturity), and when cooked will be soft and almost creamy. 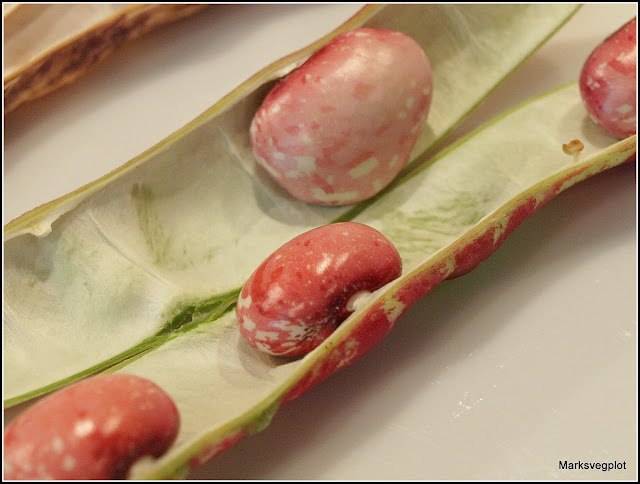 If you leave the pods to mature even further they will dry out and gradually lose their colour, like these ones: 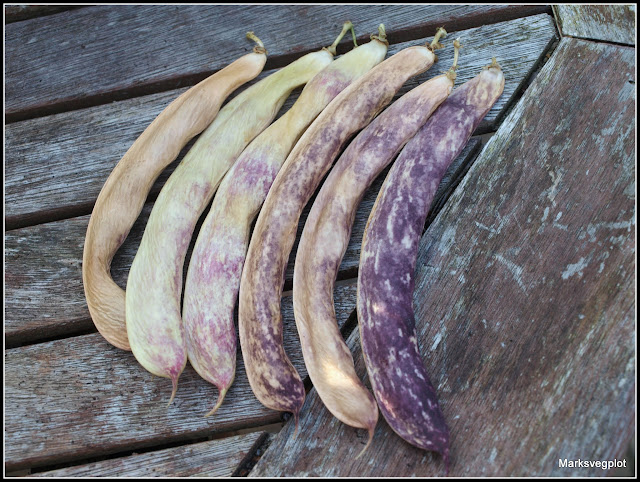 The beans inside will have shrunk and become dense and dry. They will store well, but will need soaking in water for several hours before cooking. These are what are called "Drying Beans". 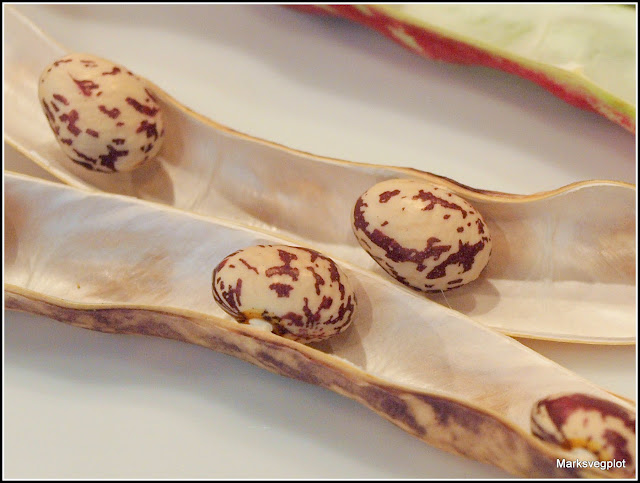 
Today I have picked 325g of Borlotti at the Shelling Bean stage, which I plan to cook this evening in a spicy tomato sauce. The remainder I am leaving on the plants for as long as possible, and I will use them as Drying Beans. 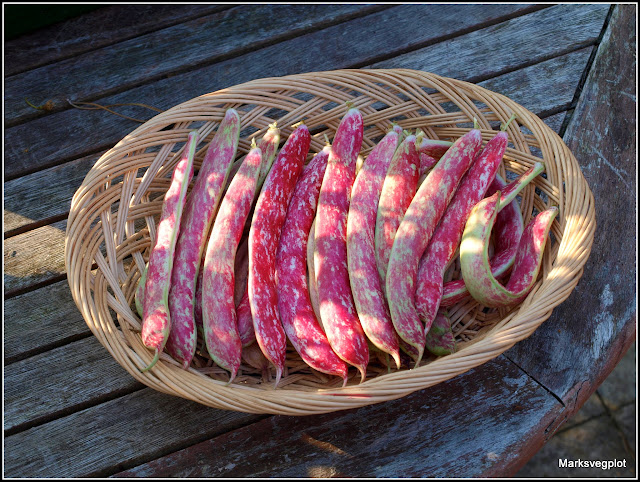