Last of the Summer Vines

The title of the post will possibly remind some readers of the TV series "Last of the Summer Wine", set in the Yorkshire Dales, in which the antics of 3 old fogeys take centre stage...


My post is about something else though - removing most of my tomato vines - though I suppose in tomato terms they are old fogeys by now... Many of them had fought a protracted battle with the Blight, (with a bit of assistance from me!), but in such a battle there is always only the one winner. Cutting off affected leaves slows the progress of the disease, but once it gets into the stems, the plant is done for: 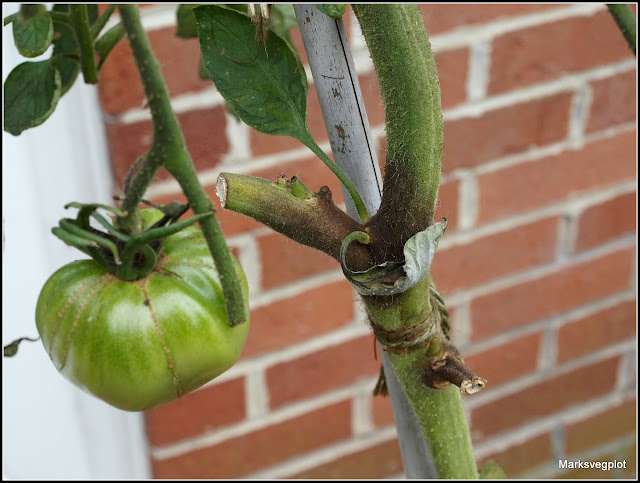 From a distance, several of my plants looked to have a significant amount of fruit left to offer: 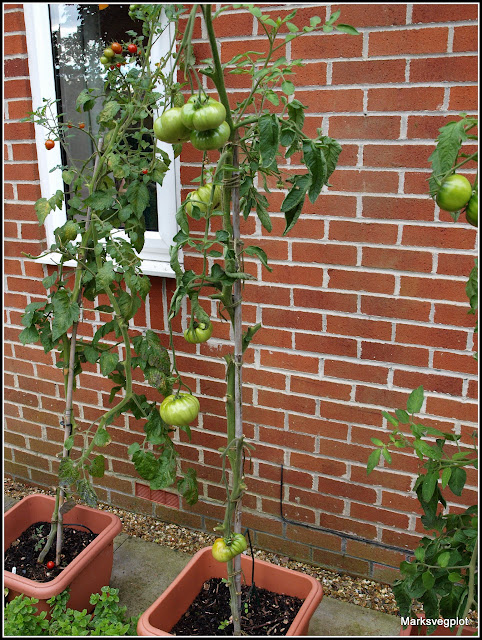 But close inspection revealed that many of the fruits were already infected with the disease. You can see the tell-tale brown patches on this pair of "Dynnye": 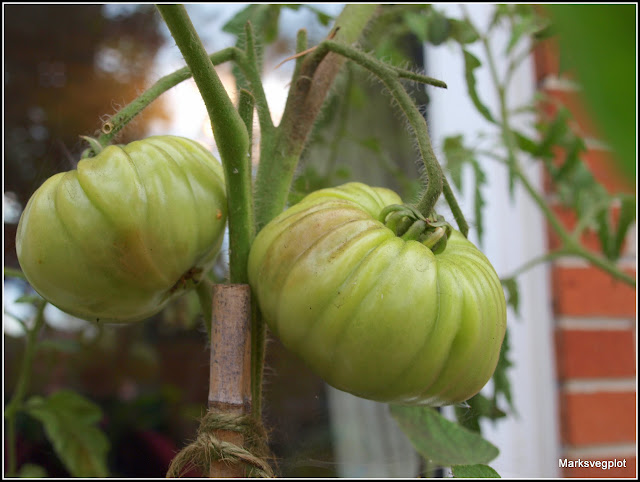 So, I have done the only sensible thing - removed all the useable fruit and cut down the plants. I'm not putting any of the tomato material anywhere near my compost bins this year, and it is all bagged-up awaiting a trip to the Tip. I shall be inspecting these fruits very carefully every day to see if any of them develop those dreaded brown patches. 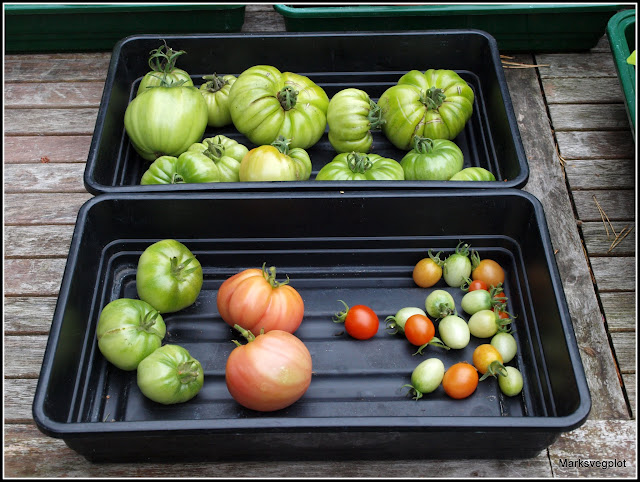 Some of the plants have managed to avoid all but superficial signs of blight, and I have not cut those ones down. This, for instance, is my "Cherokee Purple", which is still looking OK, and has a number of decent fruits on it: 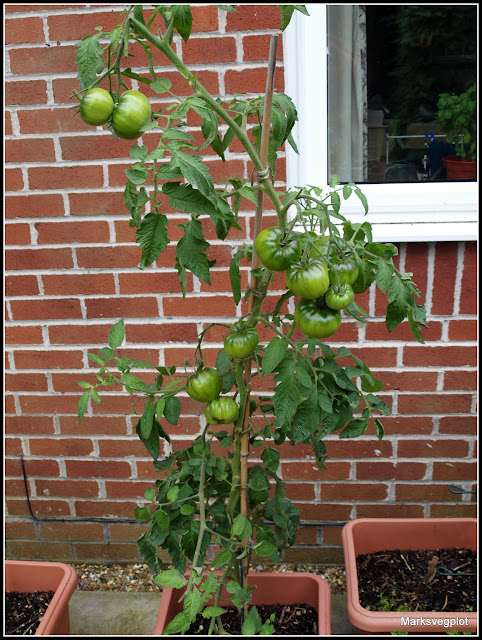 "Tigerella" has been almost completely defoliated in the battle against the Blight, but it has three big trusses of green fruit which I am trying to save. The vine is bent right over under their weight. 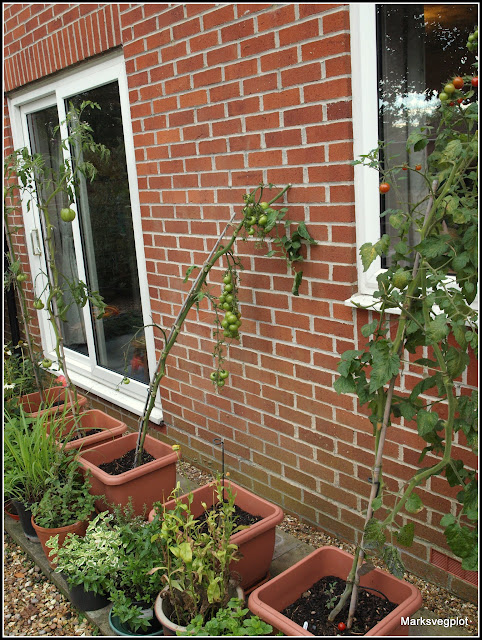 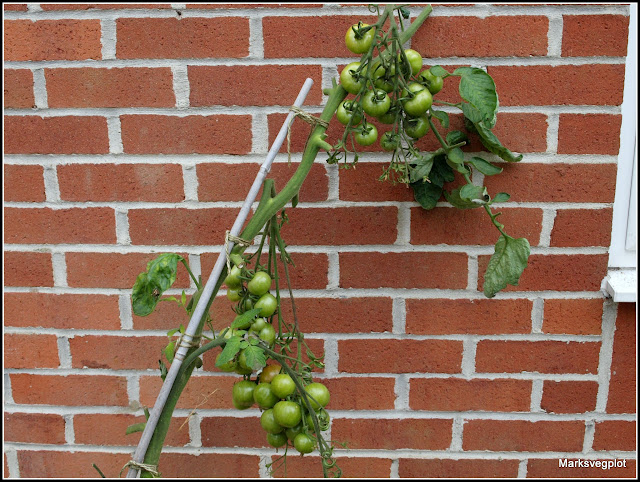 I think some of those will ripen OK, but I will be very surprised if some of them are not already blighted. I'm tempted to cut the whole trusses from the vine and bring them indoors to ripen. What do you think? Would that be a good idea?


Further down the line is the "de colgar" Spanish hanging tomato, whose fruits will definitely be cut pretty soon and hung up somewhere cool but frost-free (probably in the garage). This type of tomato has a very dry flesh and keeps for literally months. In Spain (specifically Catalonia), it is often used to make "Pa amb tomaquet" (bread and tomatoes) by rubbing the tomatoes vigorously over toasted bread, perhaps with some garlic too. The result is a bit like a bruschetta. I'm looking forward to trying that! 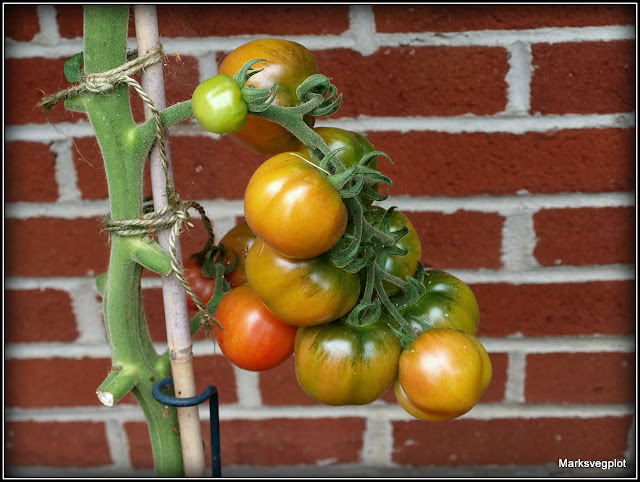