Inspired by the recent publication of The Great British Cookbook, I felt that I ought to put in a bit more effort than usual when it came to my turn to cook dinner. We don't normally have a Starter, but this time I reckon it was justified. This post describes what I made, and maybe in a day or two I'll describe the Main that followed it.

It's a long time since I used my stovetop smoker, and I felt it was time to give it another turn to earn its keep, so my chosen dish was Smoked Duck breast with quick-pickled pears.

My technique for the duck was to smoke it for about 10 minutes to give it the right amount of flavour, (I used Alder wood chips) and then put it under a hot grill for a while to finish cooking the meat and give the skin a nice colour. Smoking the duck doesn't give me much opportunity to show you the technique - just a stainless steel pan with a few wisps of smoke coming out of it... 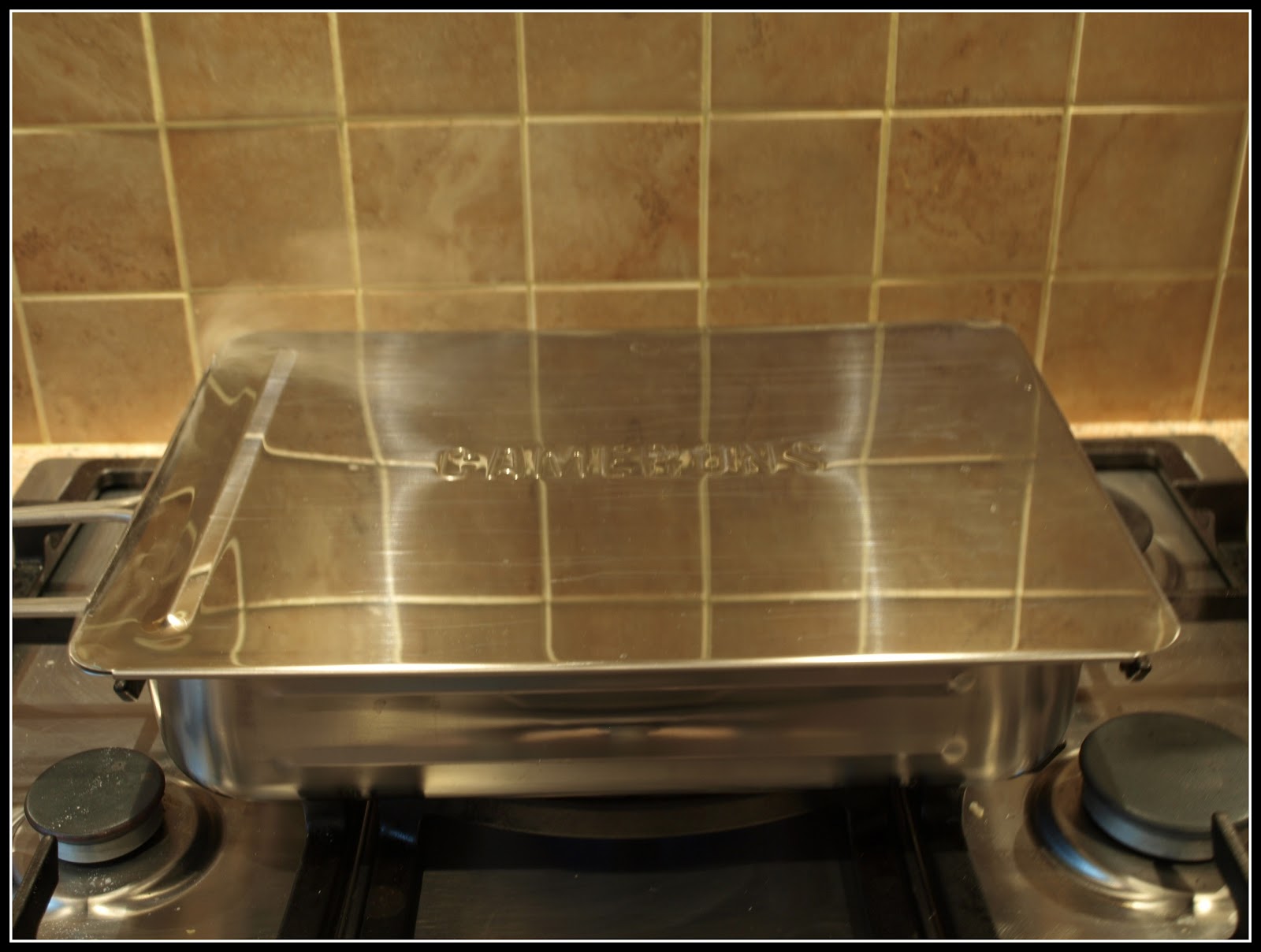 After 10 minutes I checked the meat and felt that it could do with a couple more minutes, so it ended up being smoked for the best part of 15 minutes, after which it looked like this: 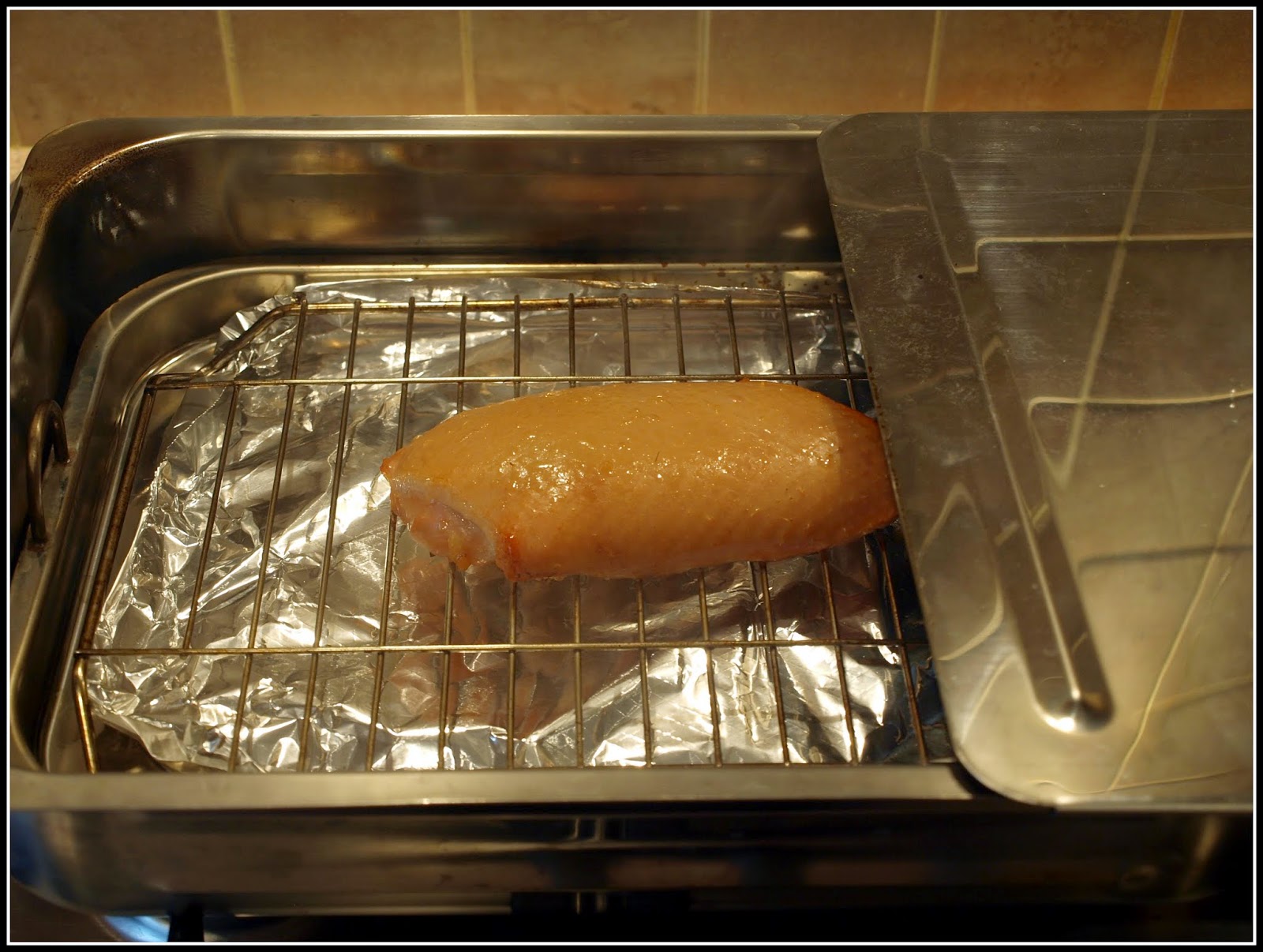 While the duck was smoking, I heated up the grill to a high temperature and subsequently transferred the meat to it, cooking it initially skin side uppermost to give the skin a nice colour, and then turning it over to cook the flesh. 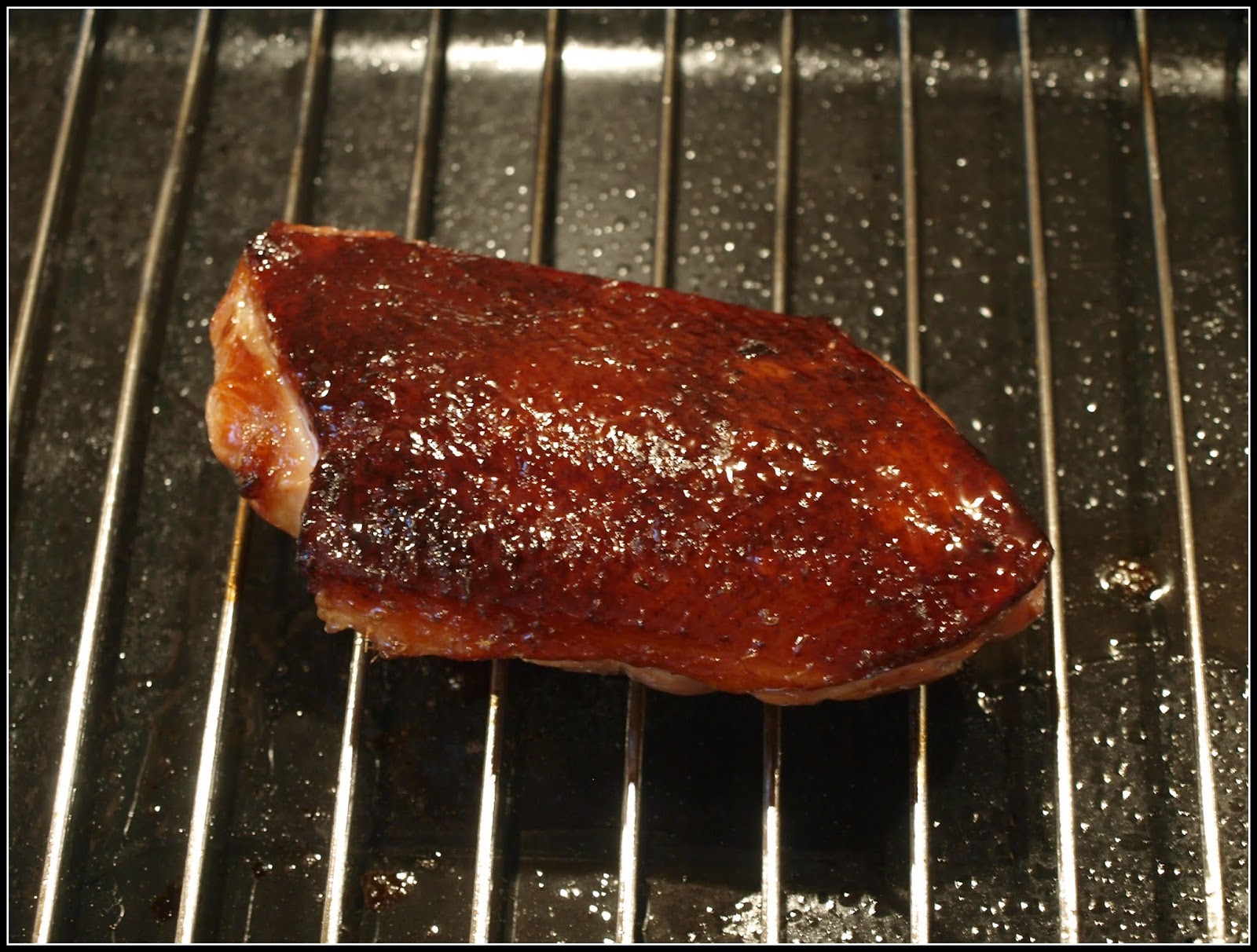 Judging when the meat was sufficiently done was difficult - I don't have much experience of this - so it was very much a matter of trial and error! I sliced into the meat with a very sharp knife a couple of times to see how things were going. When I judged it ready, I lifted the meat onto a chopping-board and left it to rest. As you can see in the photo below, the duck breast was very juicy, and juice continued to run out of it for quite a while. 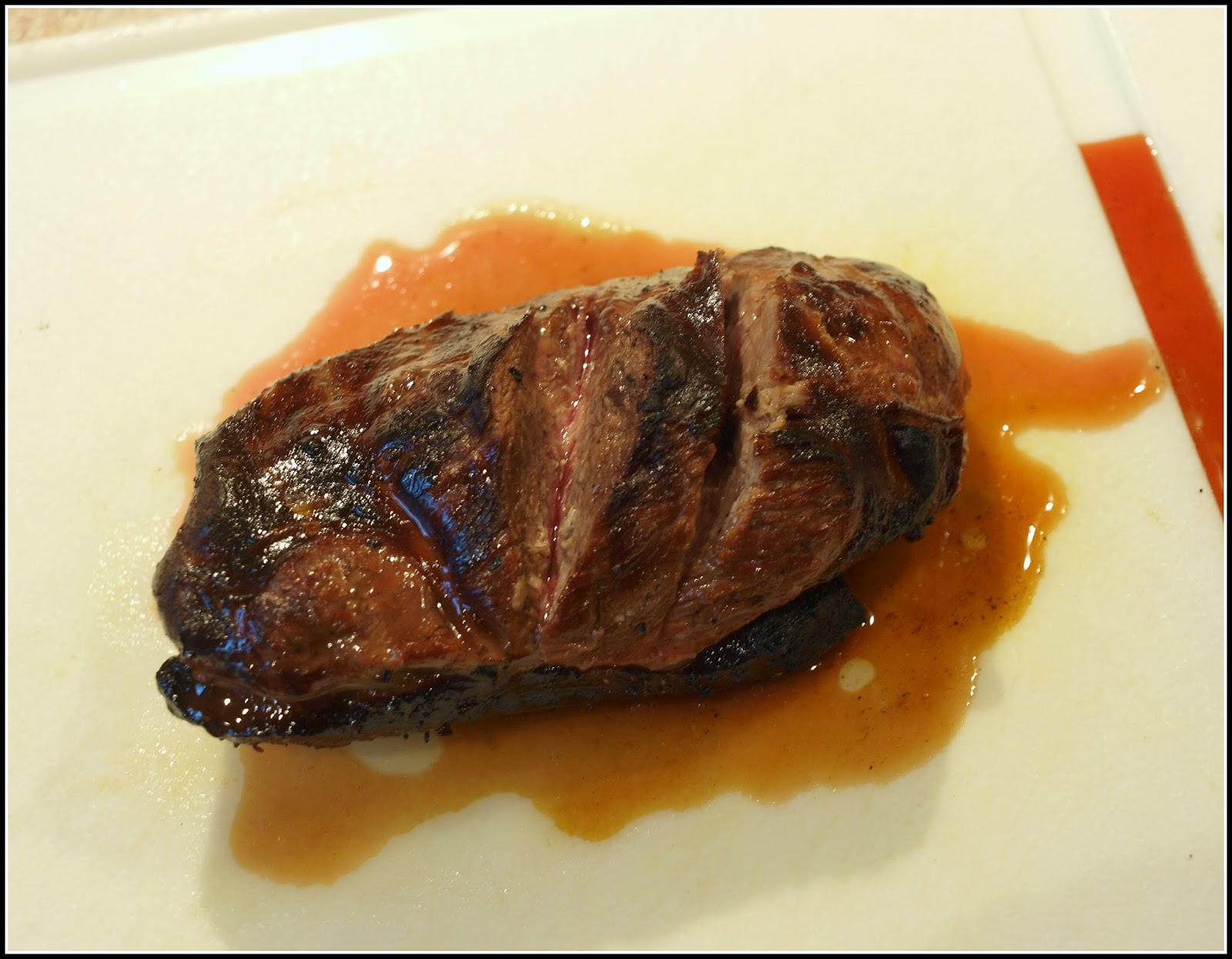 When the duck was completely cold, I put it in the fridge. Later on I sliced it thinly: 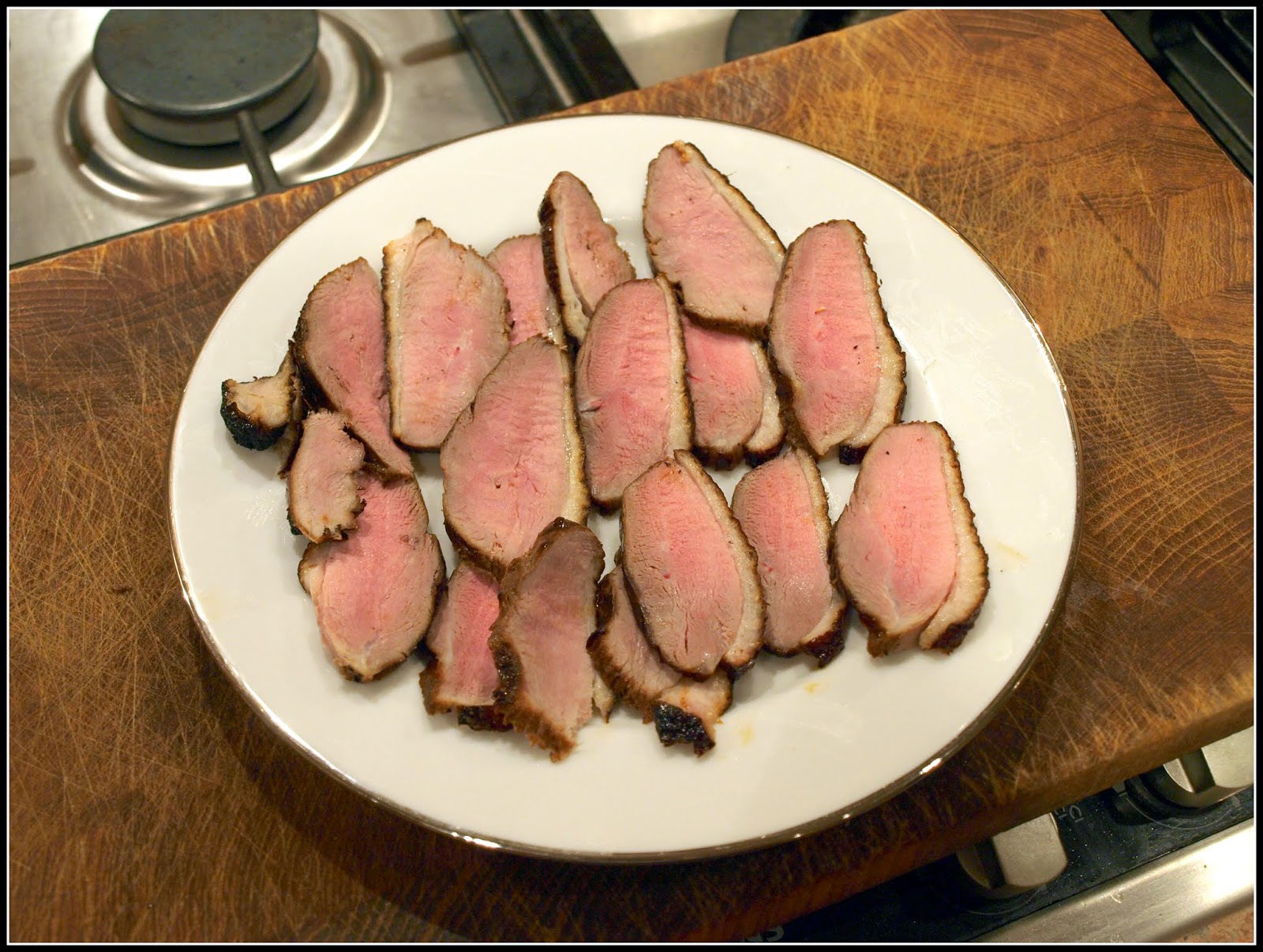 I know that opinions on how to serve duck differ widely, but that looks just right for me! 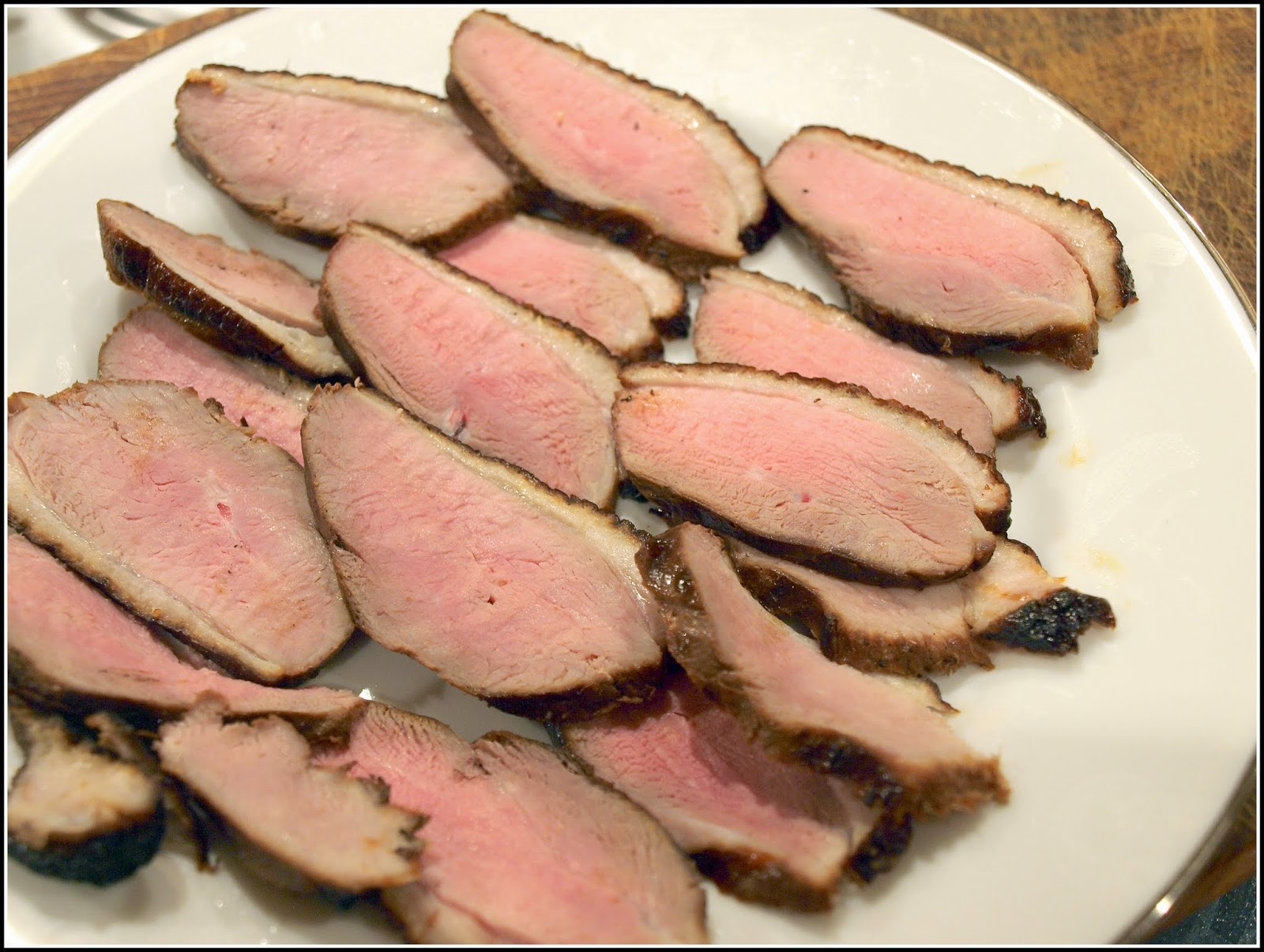 Meanwhile, I made my pickled pears. Pickling pears in the traditional way takes a fair old while (I have described it HERE), but this time I used a super-quick method instead. I peeled and quartered one large firm pear and then poached it for about half an hour in water to which I had added about 25ml of Cider vinegar, a quarter teaspoon of Mixed Spice (a mix of sweet spices like Cinnamon, Cloves, Ginger etc) and about a tablespoon of Sweet Freedom (a diabetic-friendly sugar substitute). 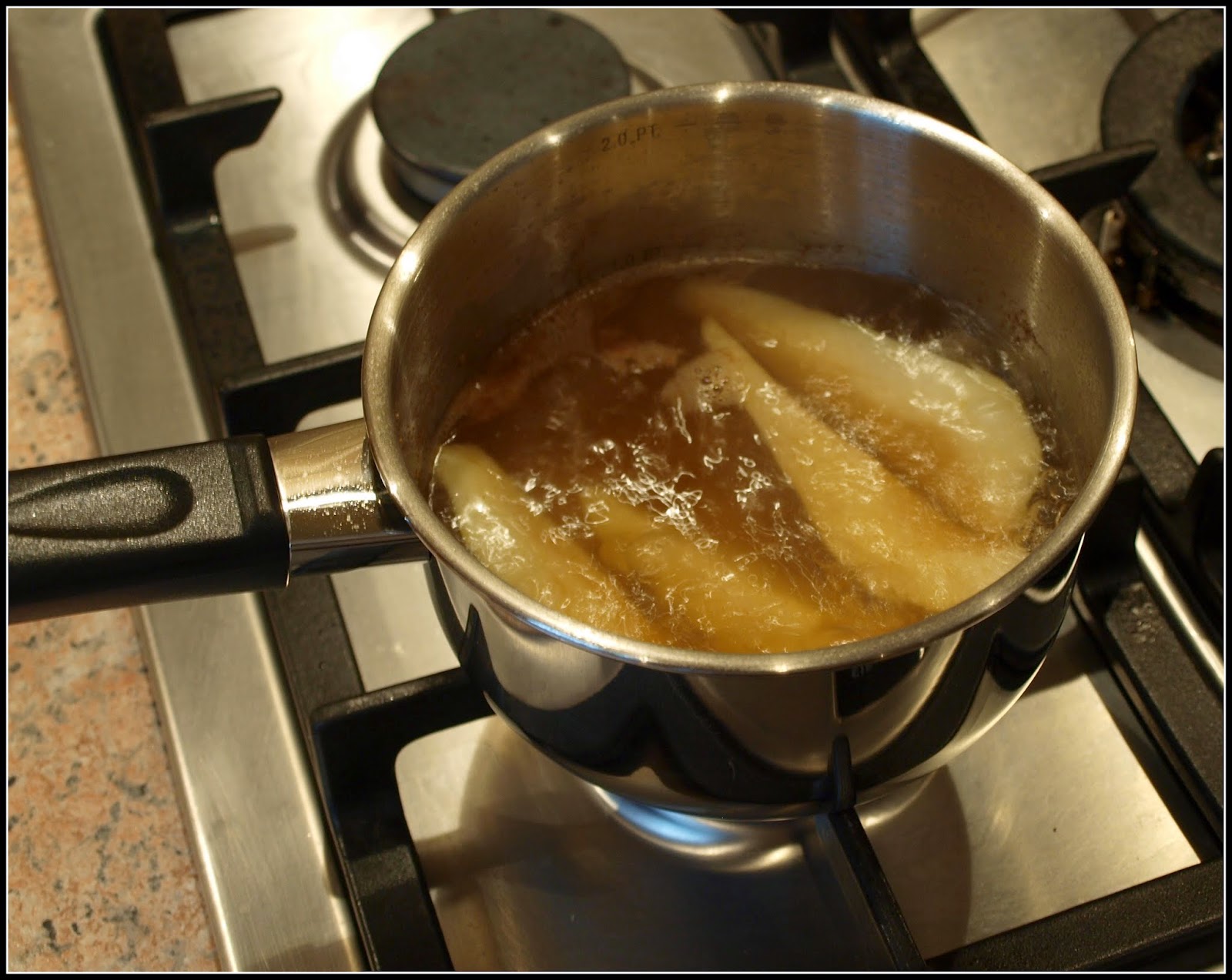 Cooking the pears in an open saucepan like this allows the poaching liquid to evaporate, thus concentrating the flavours. When sufficiently cooked the pears were soft (easily pierced with the point of a knife), but still firm enough to be sliced. I put them in a covered plastic box in the fridge to chill.

OK, so here is the finished dish, plated-up: 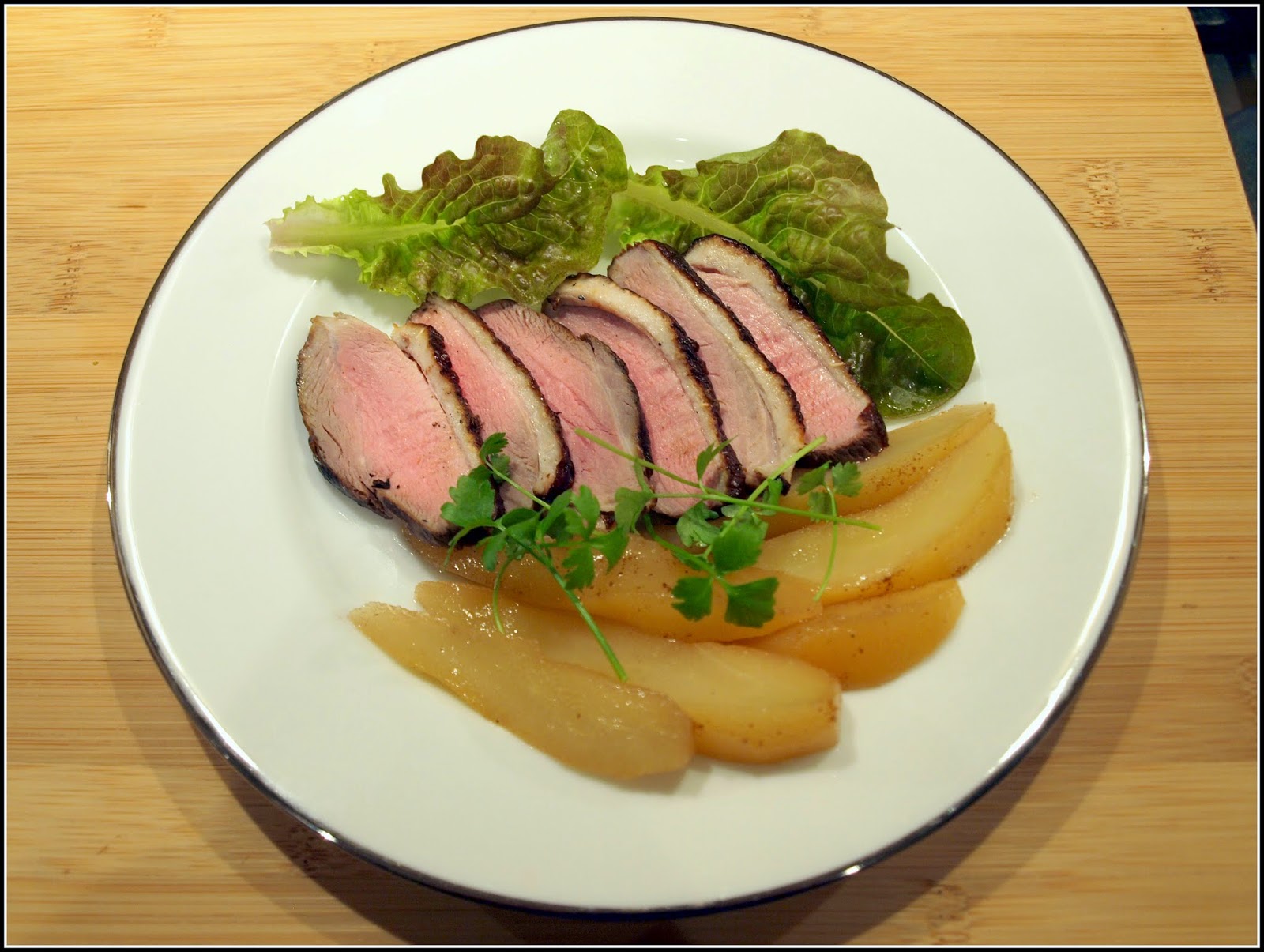 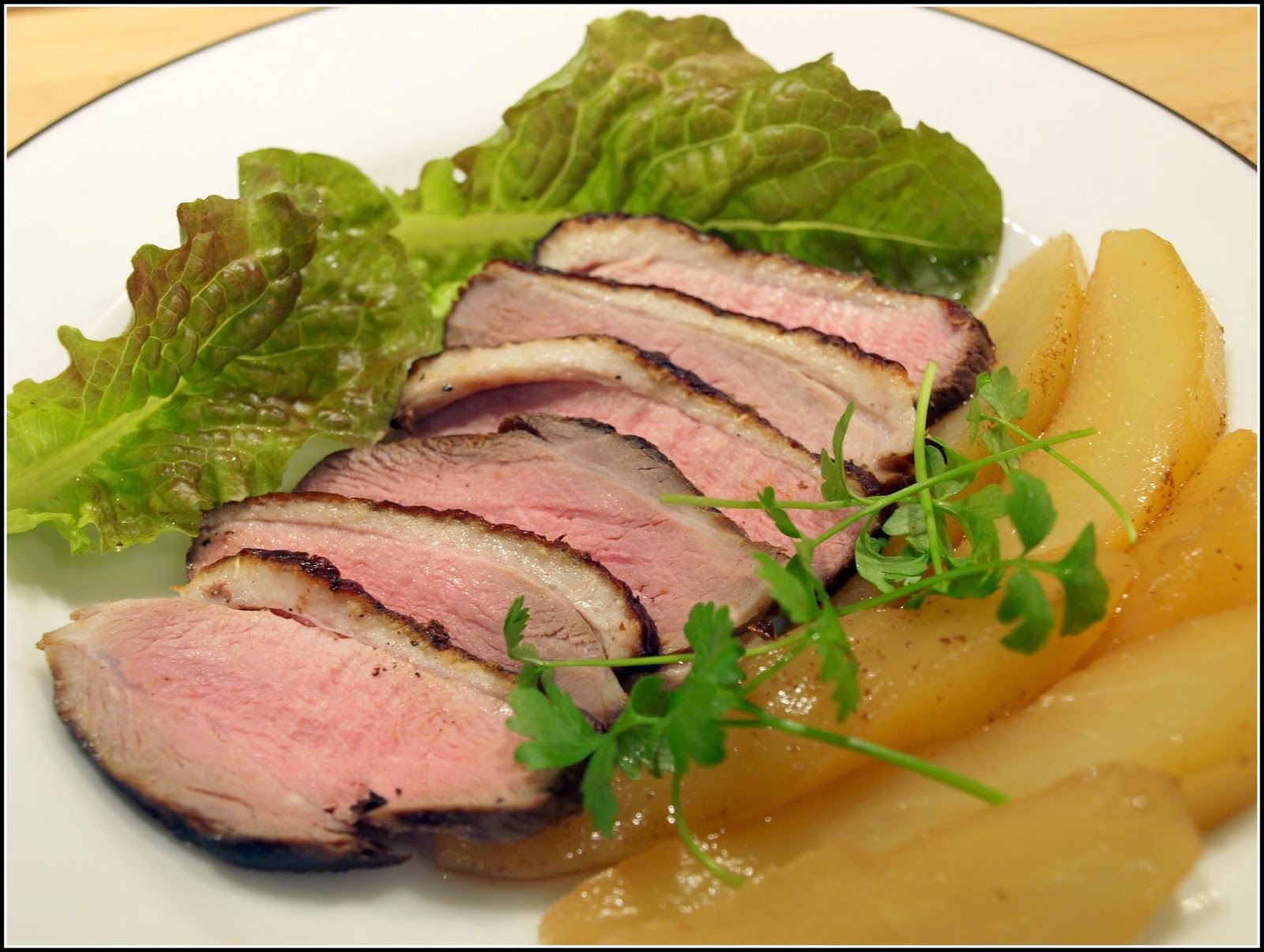 My enthusiasm for the stovetop smoker has been re-kindled. The duck was really nice - not overly smoky (The Alder wood is relatively mild), and still succulent, and the spicy-sweet pears were an excellent foil to the fatty meat. The little garnish of tiny Celeriac leaves was good too - we are very fond of those these days. I shall definitely be growing them regularly from now on.