During the winter months, when food supplies are relatively scarce, animals frequently dig in the soil to find worms. I know that badgers do this, though I have never seen a badger in my garden. I also suspect that foxes do this - and I have seen foxes in my garden many times. I am as wildlife-friendly as the next man, but I really don't want animals to dig up my precious plants, so I often have to go to great lengths to protect them.

Just a few days ago I removed the Enviromesh from the bed in which I have been growing Carrots and Parsnips, because the season for Carrot Root Fly is over for another year. This makes the bed very vulnerable to fox / badger damage, so I have taken the precaution of covering it with a length of chicken-wire: 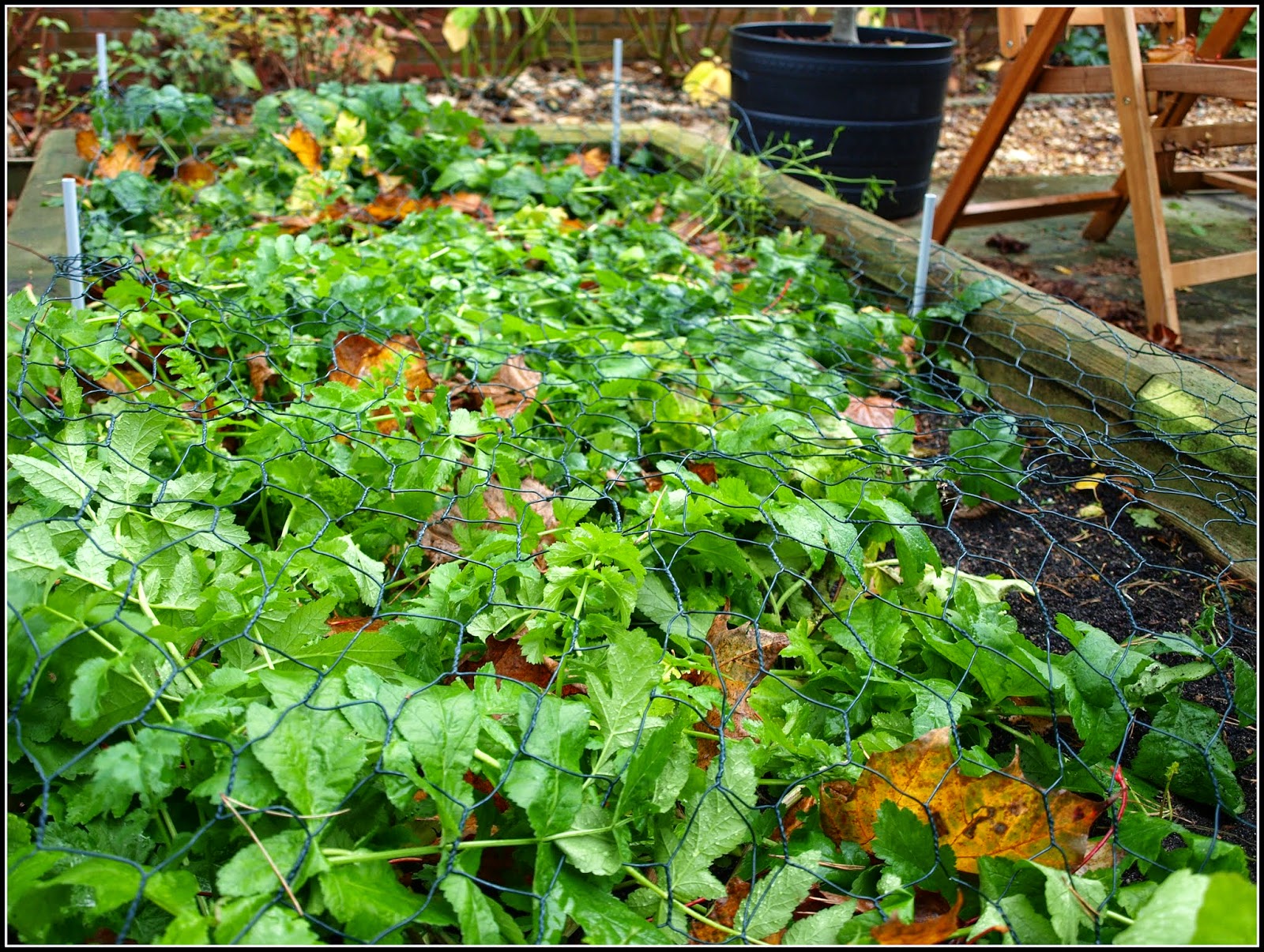 I have pegged it down with some 18" rods, to stop it being shoved aside by the pesky beasts: 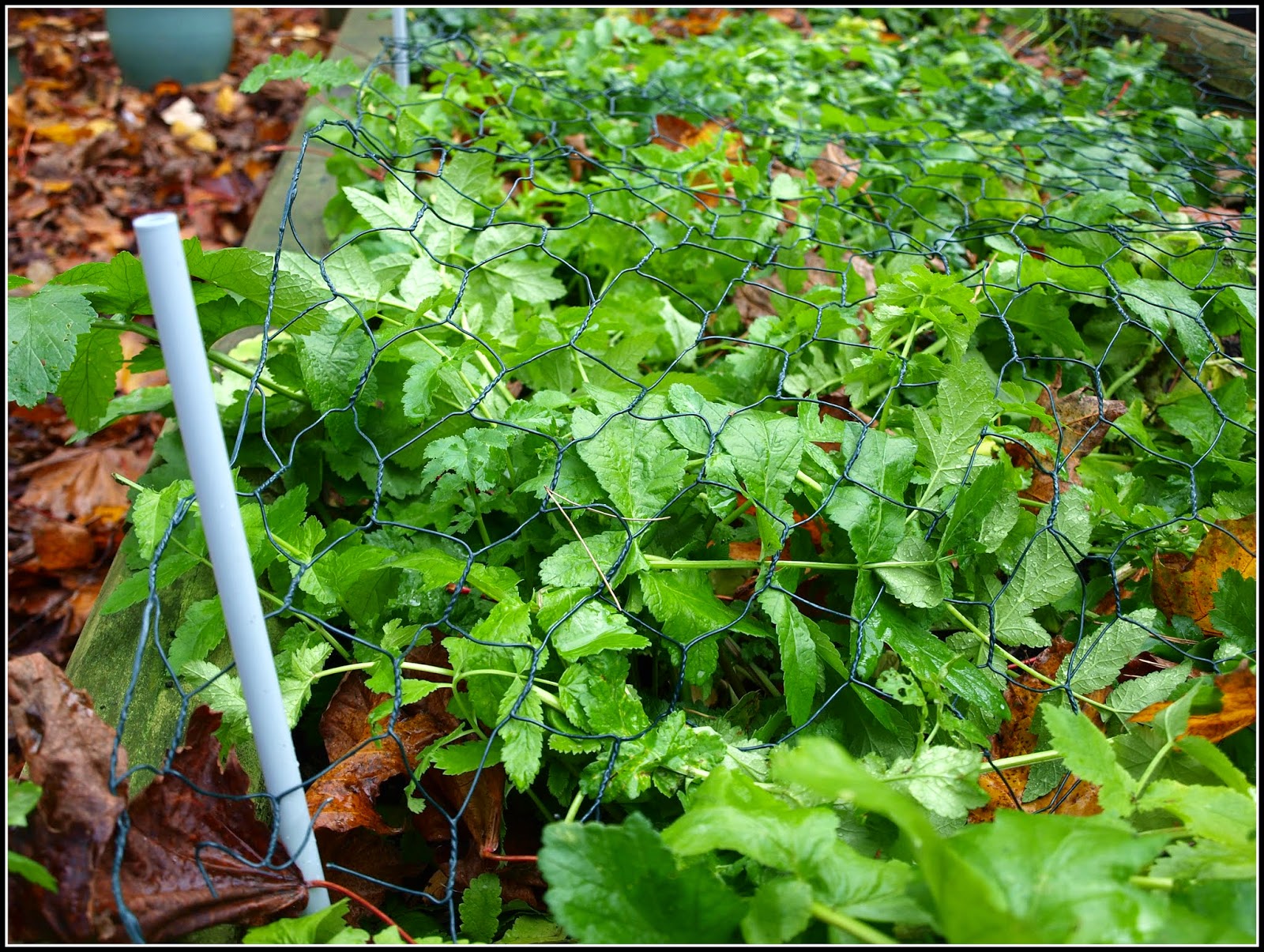 Of course, it won't stop them sitting on it, but it might make digging a bit more difficult for them.

Today I also want to follow-up on what I did with the "Bishop of Llandaff" Dahlia which I wrote about the other day. Several people left me comments about what they do with Dahlias during the Winter, and my plan is a combination of various elements of their advice.

Our first frost of the year, which came last week,  was not very severe, but enough to make the Dahlia foliage go limp and brown, so it was definitely the right time to put the Winter plan into action. I cut the stems down to about six inches and gently teased most of the soil away from the tubers. 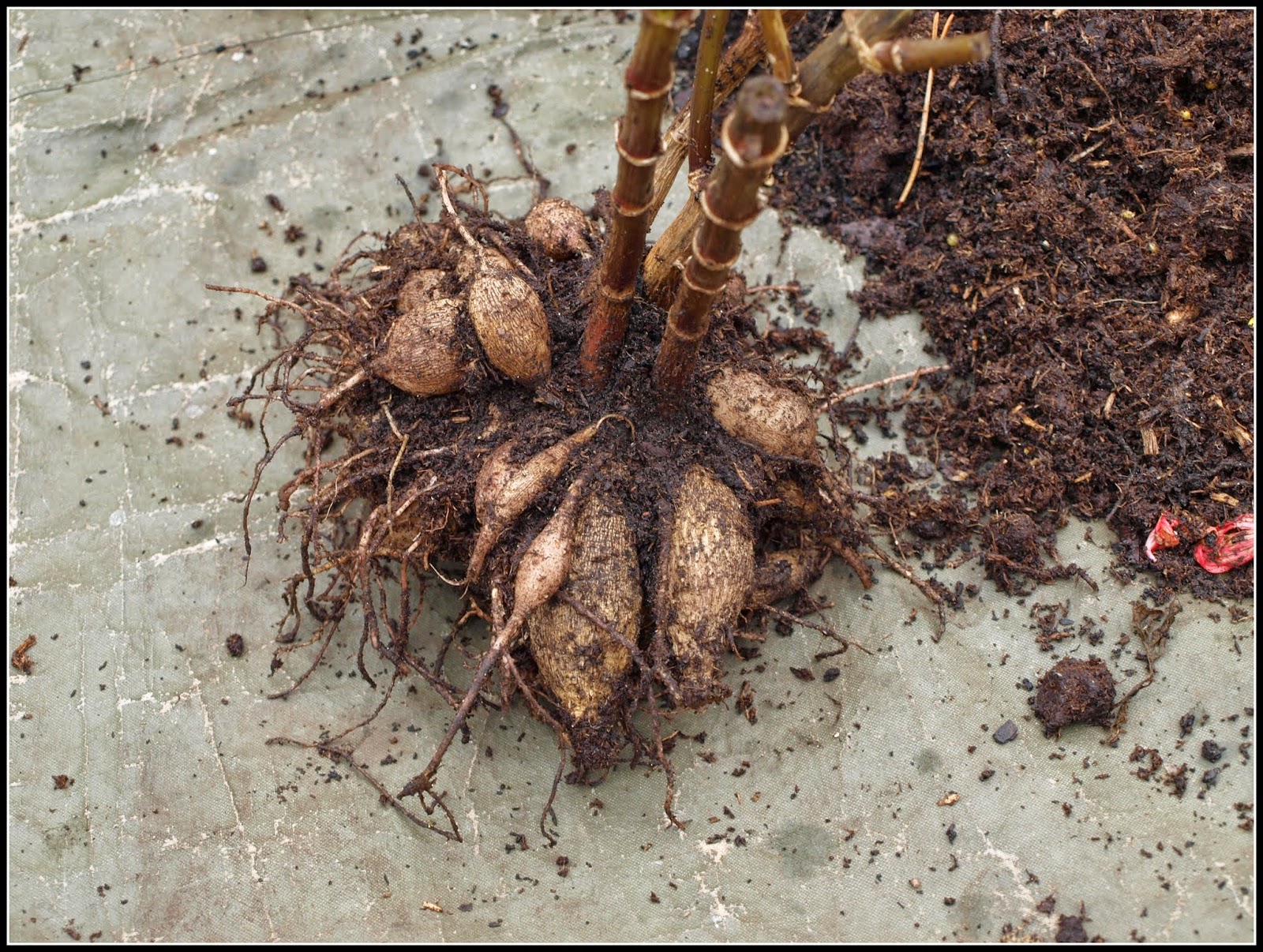 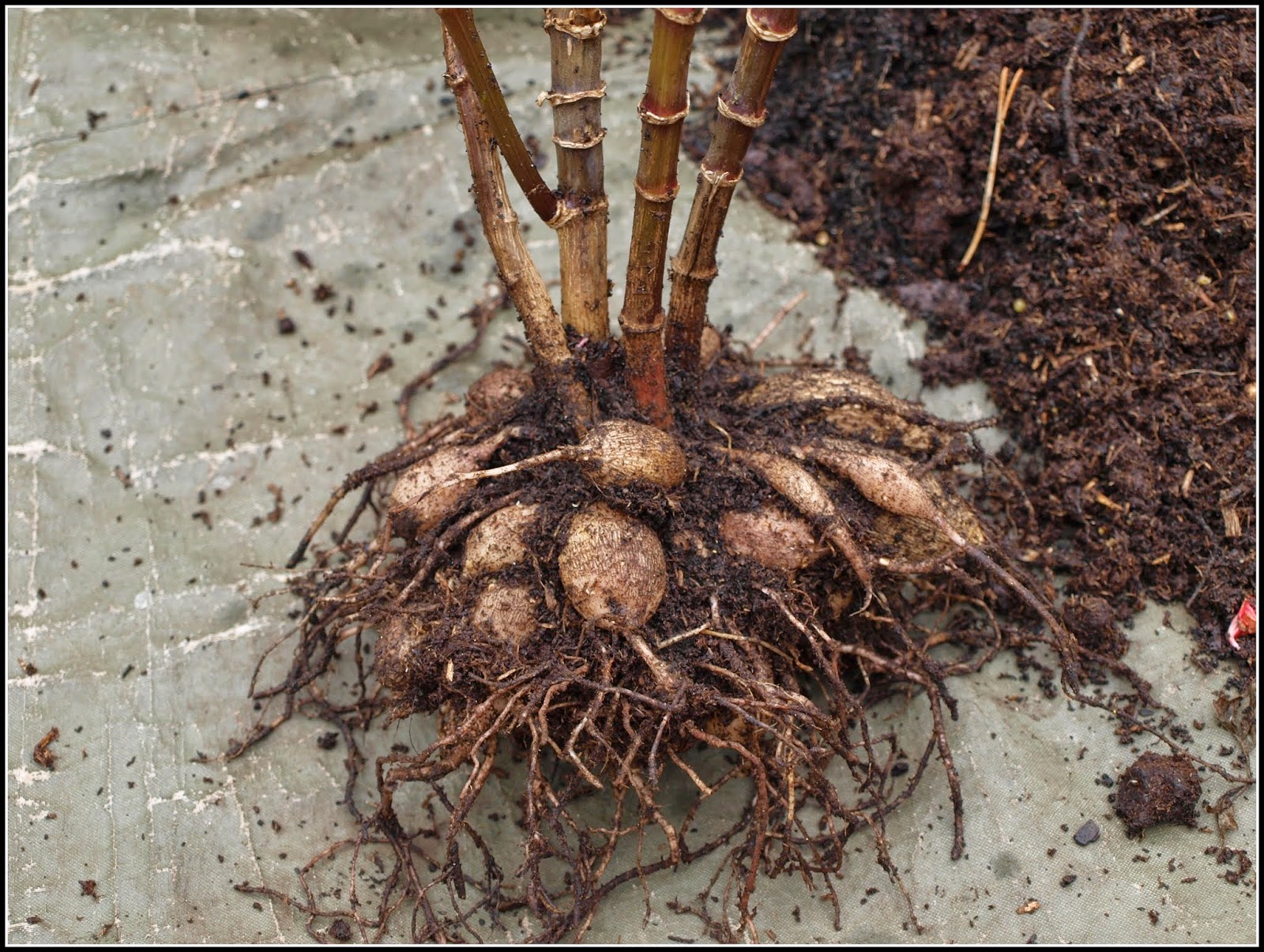 Then I re-potted the plant into a fresh pot of commercial compost, covering all the tubers and leaving just a couple of inches of stem protruding. 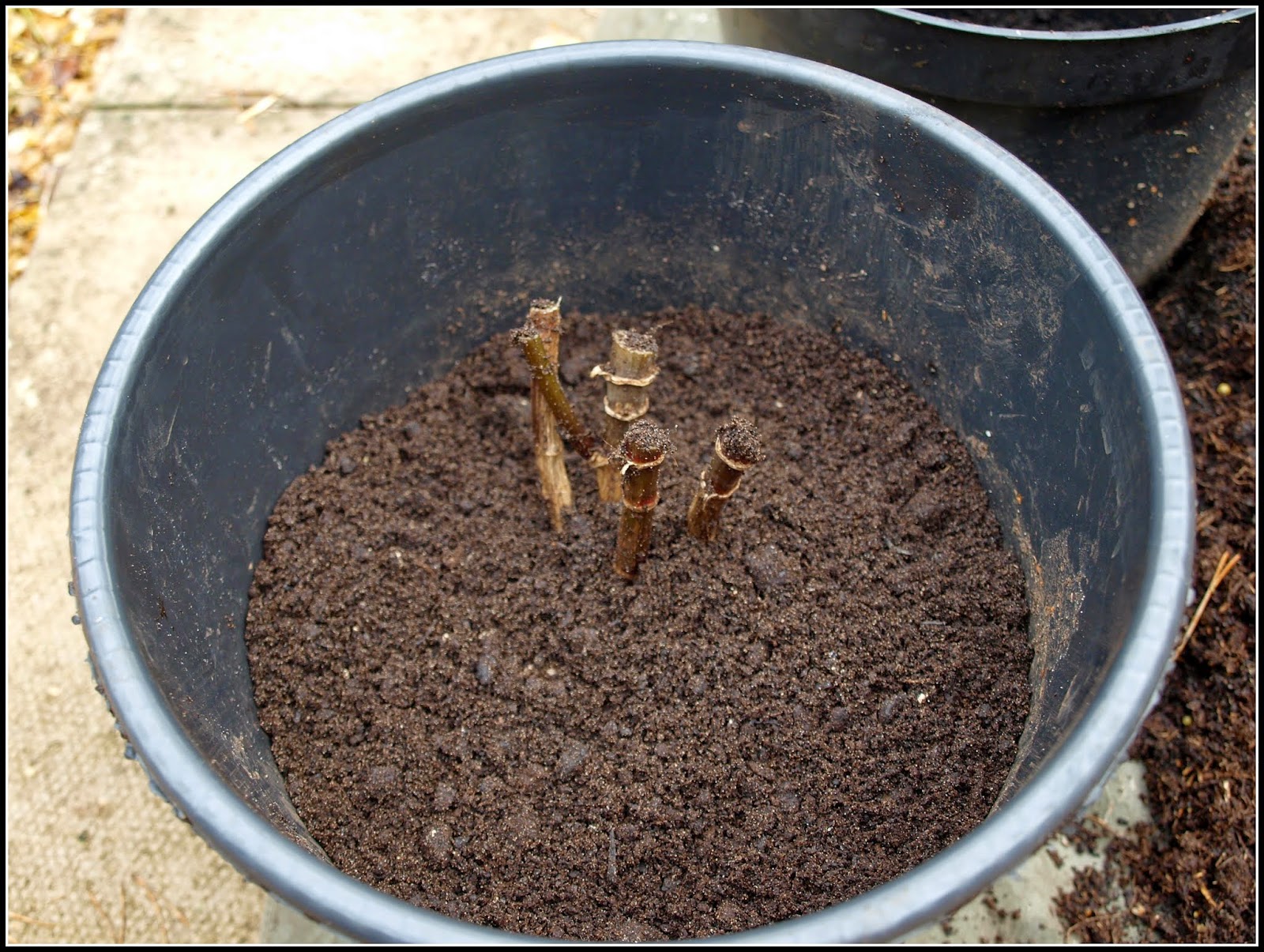 The compost I used was from a bag that has been kept outdoors, and it felt just slightly damp, which seems ideal.

The pot has now gone into the garage, which is cool but frost-free. During the Winter I will probably water the plant a couple of times so that the tubers don't dry out. I haven't decided what I will do with it in the Spring. Maybe I'll just take it outside and let it grow on in the same pot, but then again perhaps I'll have a go at dividing it and making several new plants. Fortunately I don't have to decide just yet... 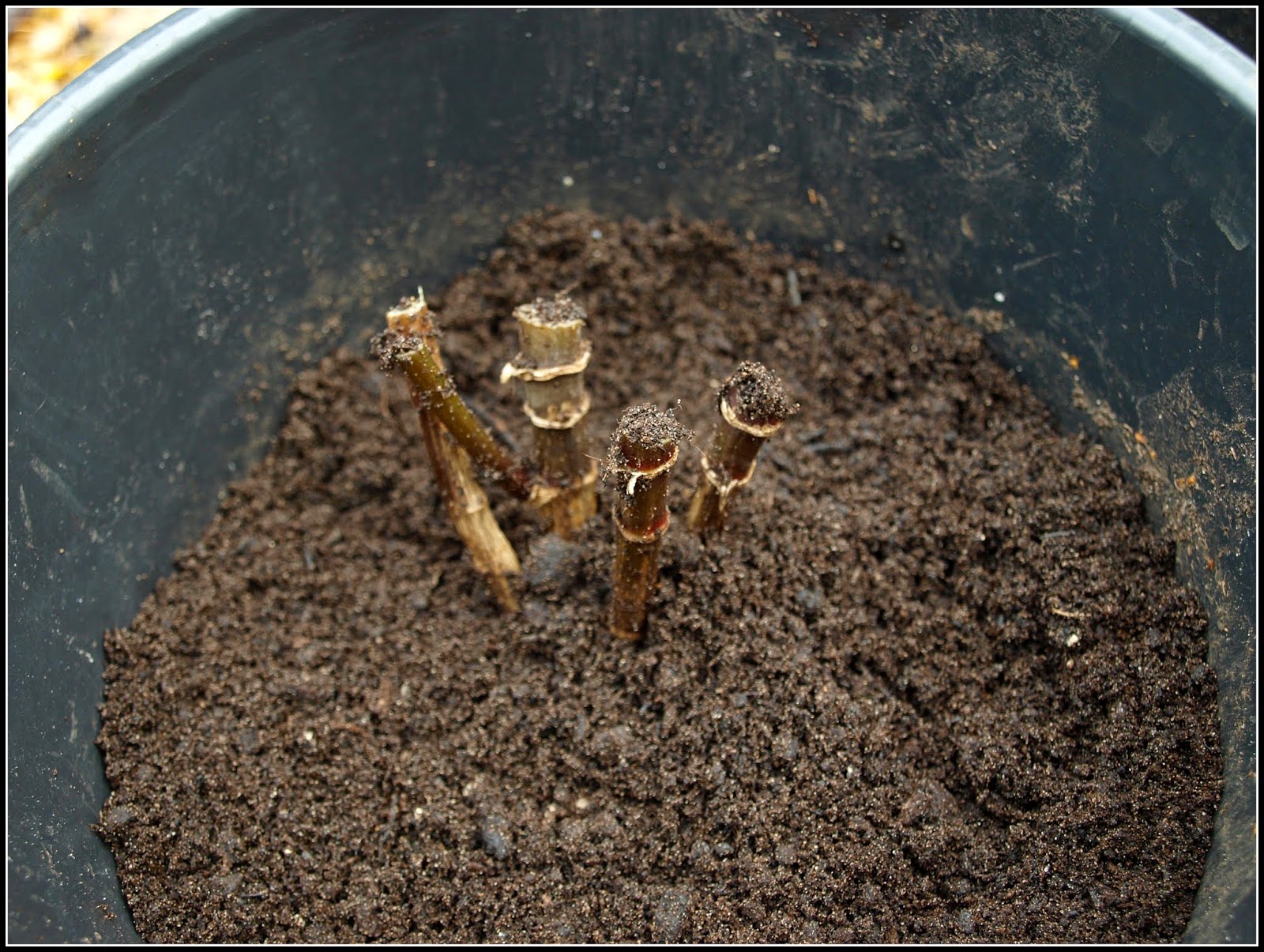