Yesterday I harvested my first Parsnips of the year: 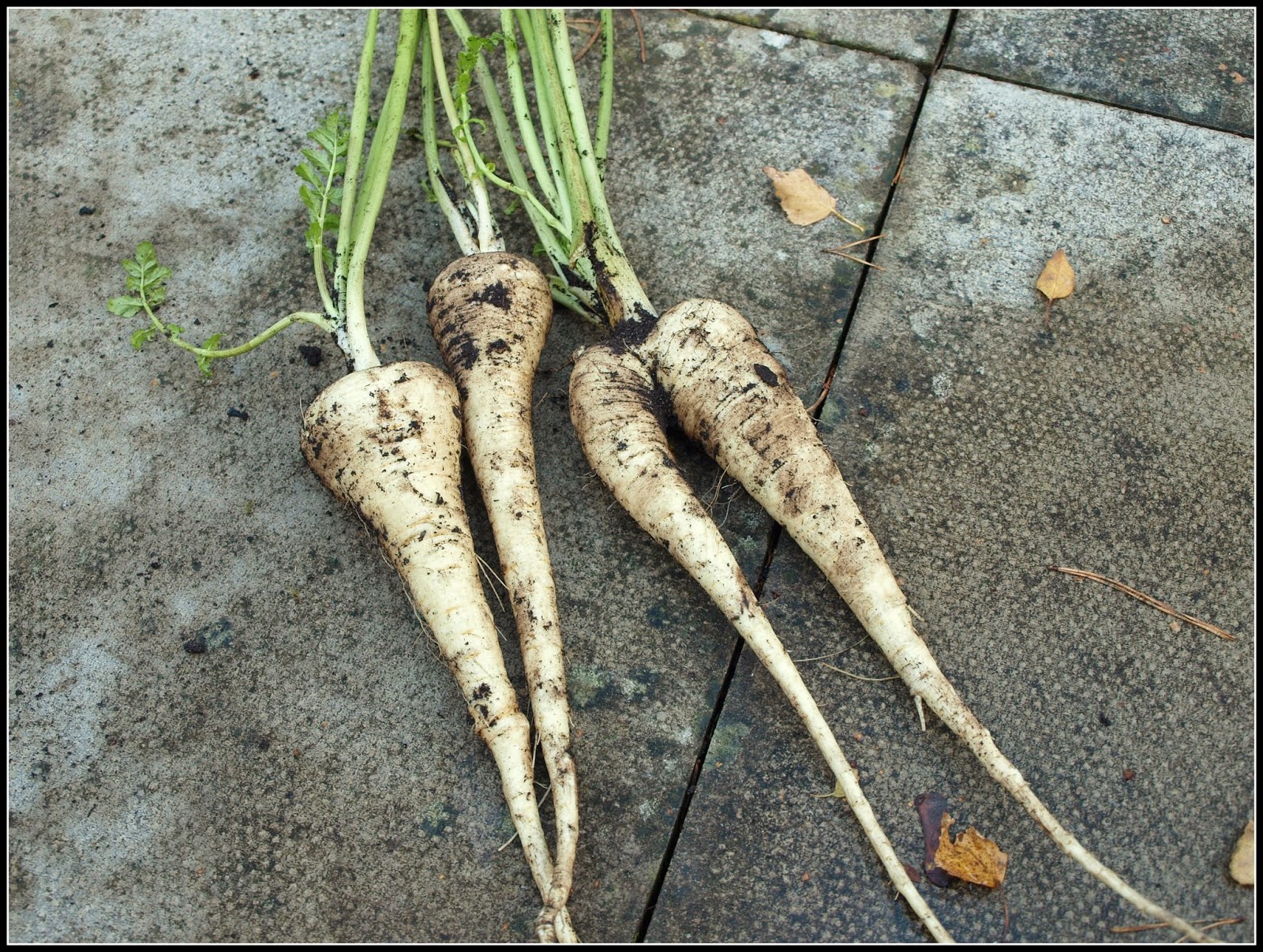 They are the variety "Duchess". They have been grown in that deep Woodblocx raised bed, alongside my carrots. Just like the carrots have been, these parsnips are exceptionally smooth and clean. The mixture of compost and sand seems to have suited them very well, and the complete absence of insect damage bears testimony to the effectiveness of the Enviromesh with which I covered them.

Harvesting these parsnips was an awful lot easier than I am used to. I just grabbed the leaves and pulled, and up they came. This doesn't usually work. Usually you end up with a handful of detached leaves and the root still firmly embedded in the soil. You then have to set-to and dig it out with a fork. This time the lighter, sandier soil / compost in the raised bed made digging unnecessary.

Sandy or loose soil normally means you get fewer forked (multiple-rooted) parsnips, so I was quite surprised that the very first one I pulled up looked like this: 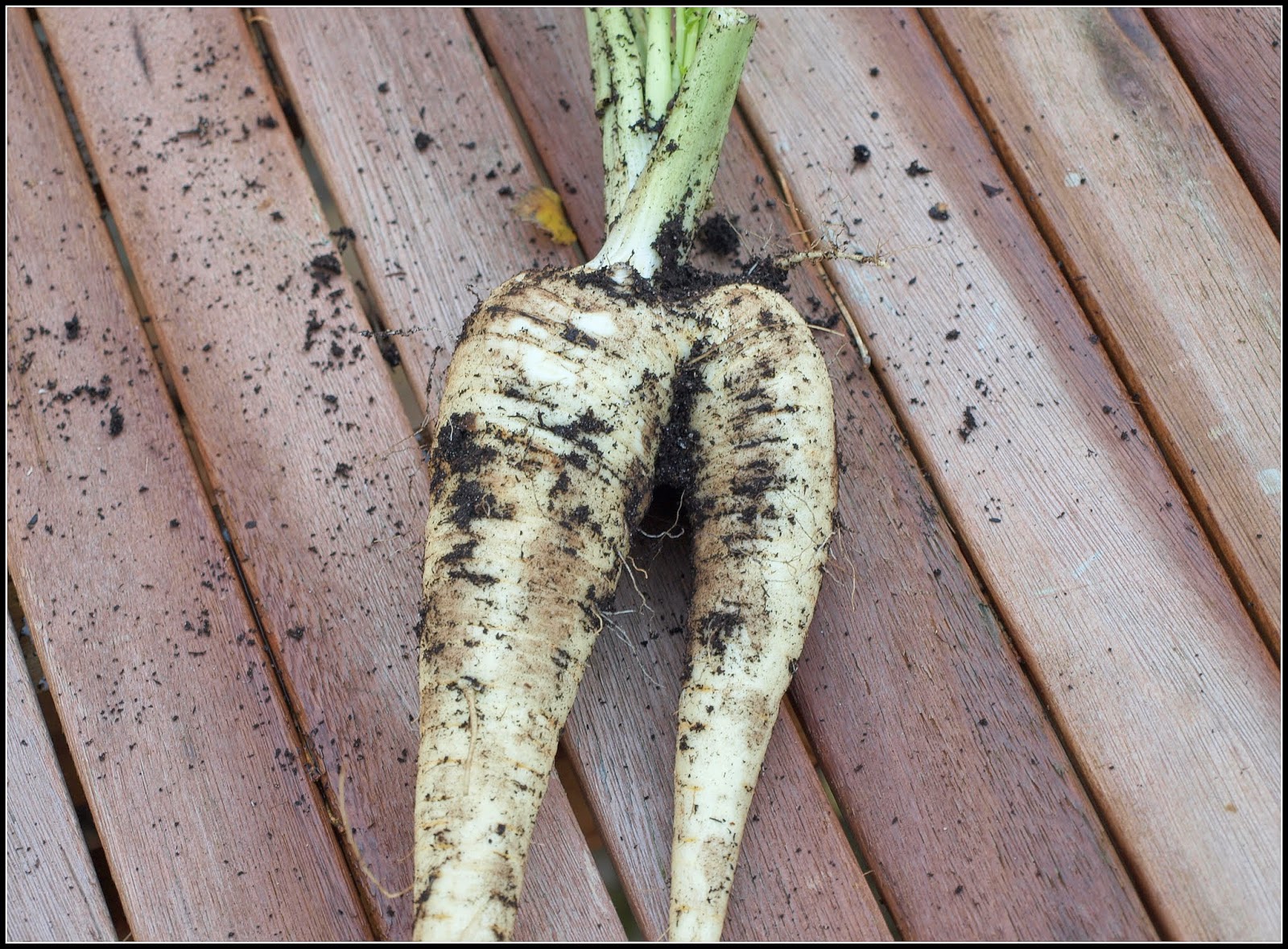 The other two were very regular, so let's hope the will be few forked ones. Forked parsnips can sometimes be very difficult to use, but this one wasn't. I just separated its "legs" and treated it as two.

The leaves and the roots of these parsnips are very long. The roots must have gone right down to the bottom of the deep raised bed - and possibly into the ground below it, though maybe not since it is very hard and stony, as I discovered two years ago when building the raised bed! 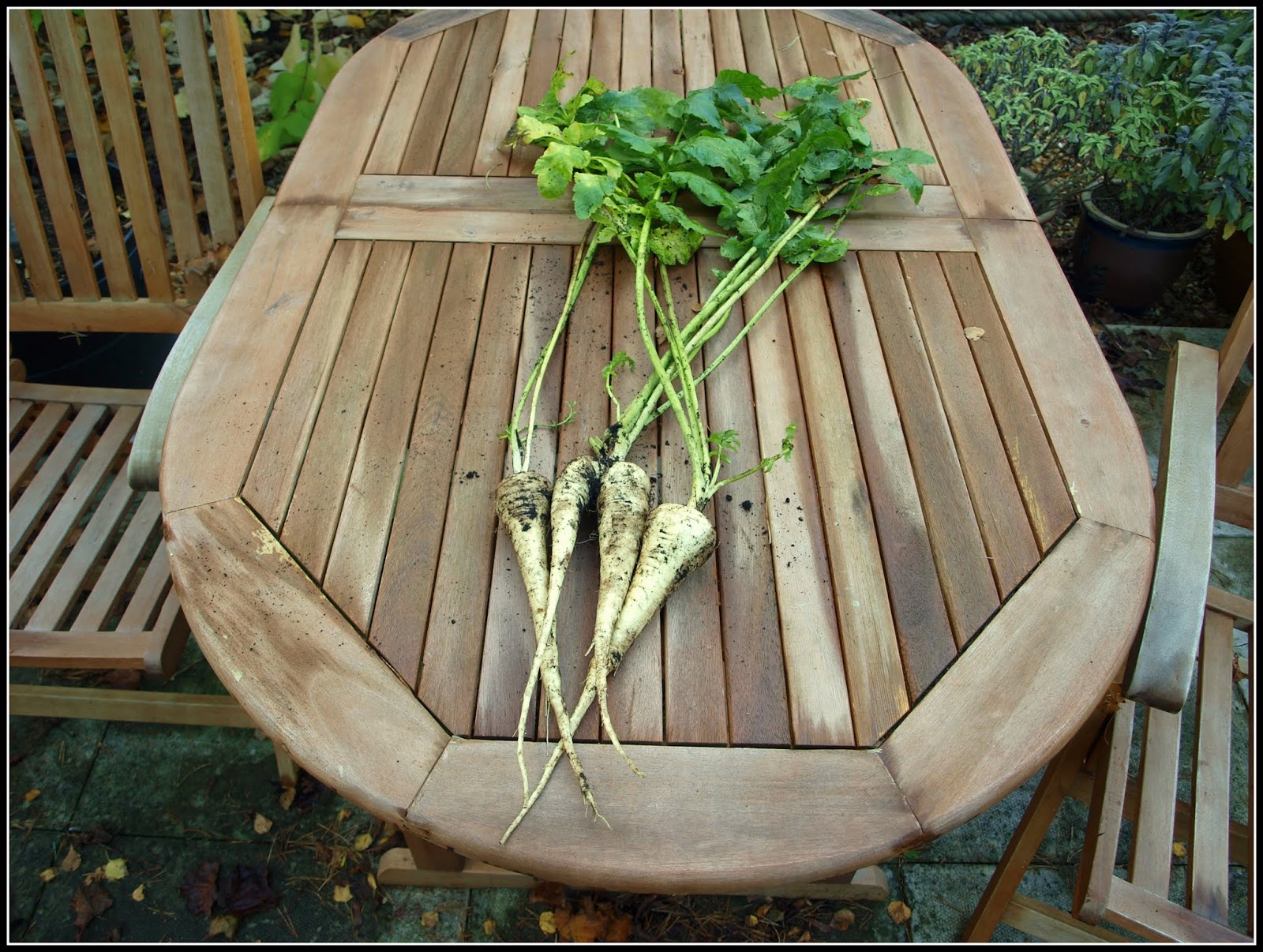 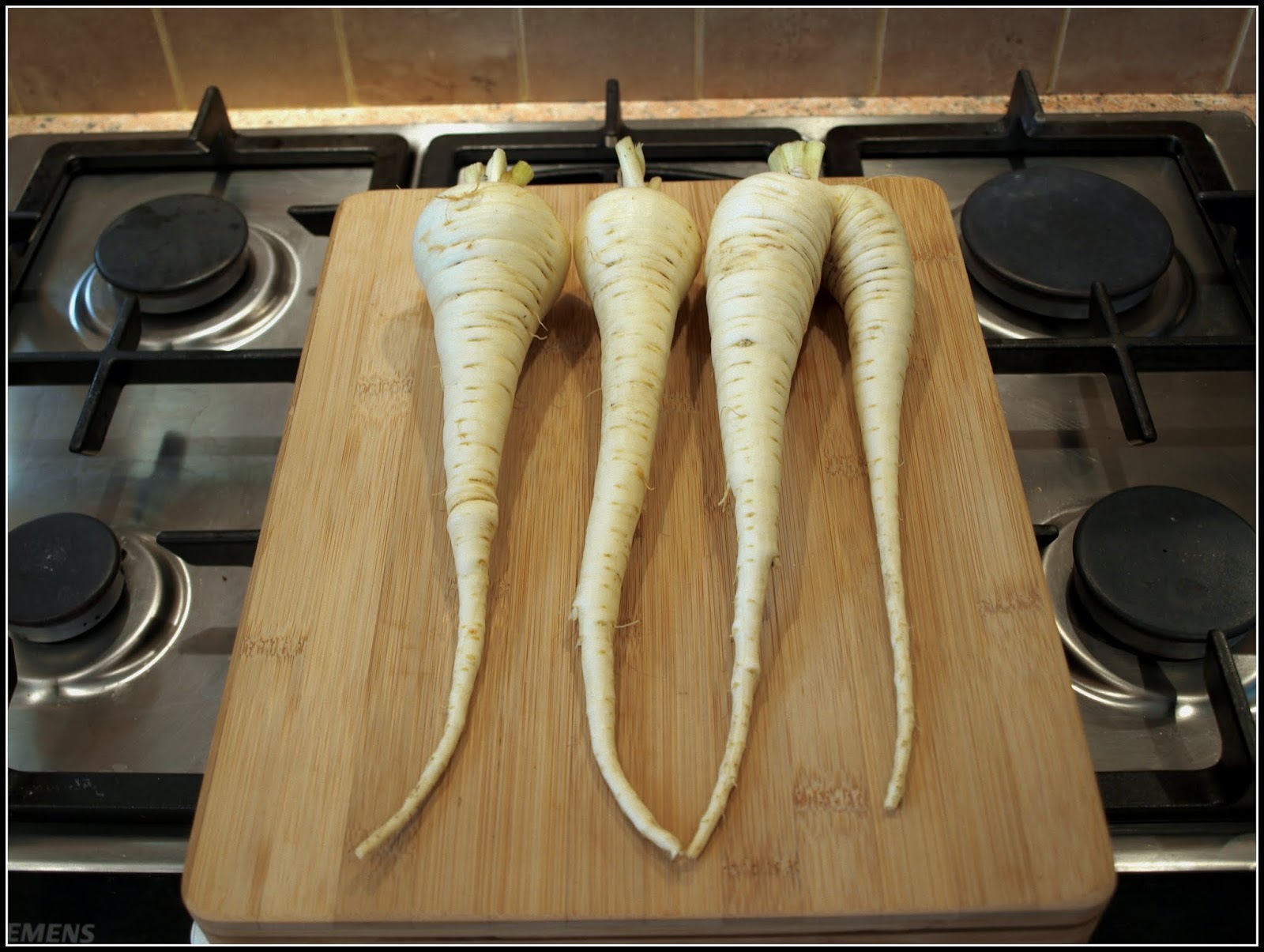 I'm very pleased to say that these are probably the best parsnips I have ever grown. Their skins are almost completely unblemished. Not a sign of any canker, which is most unusual. 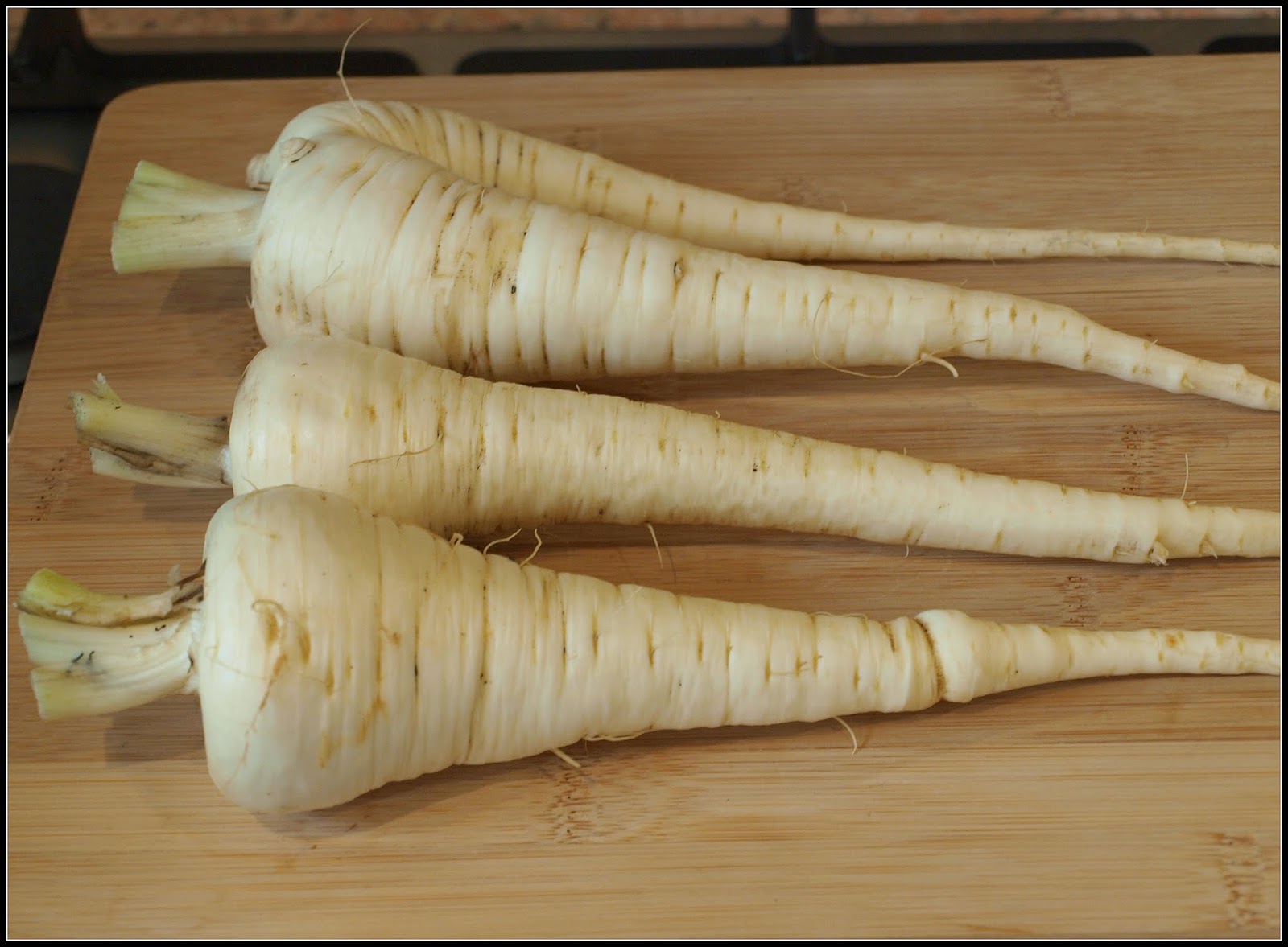 These particular specimens were roasted alongside a leg of lamb, and served with the Brussels Sprouts I wrote about yesterday and some roast potatoes - a classic British roast dinner! As far as taste goes, I think the parsnips scored just as well here as they did in terms of appearance: First Class. Now I'm just hoping that the rest of them will be as good. It would be wrong to judge the crop solely on the strength of the first 3 roots.
Posted by Mark Willis at 12:00