I love growing chillis. Have you noticed? Growing chillis is something that for me is now "non-negotiable". Despite not using great quantities of chillis in our cooking, and not being a fan of hot chilli sauces and condiments, I still want to grow them for their looks, for their potential as photographic subjects, and simply for the challenge of producing good-looking and productive plants - in exactly the same way as I might specialise in Leeks, or even Dahlias or Orchids. For this reason I have recently been attracted to a new challenge:- getting chilli plants to survive our cold Winters.


In the right conditions (i.e. in the tropics!) chillis are perennial plants. Here in the UK most people treat them as annuals, growing them anew from seed every year. However, some chillis need a very long period of warm weather to produce ripe fruits (especially the "capsicum chinense" types), and the UK is not normally noted for such conditions. For this reason some people prefer to retain their chilli plants from year to year. This will normally mean that they produce ripe fruit considerably earlier than seed-grown ones.


Last year I tried over-Wintering chillis for the first time, and had mixed success - about a 50% survival rate. The plants that made it through the Winter did indeed go on to produce early fruits. Unfortunately they were then nearly destroyed by a very severe hailstorm in the Spring, soon after they had gone to live outdoors! Anyway, having proved that over-Wintering is possible, I have decided to try again this year. I am not claiming any particular expertise in this area, so don't treat what I'm writing as gospel. I'm simply going to describe my method. You can copy it if you like, but don't blame me if it doesn't work for you!

My technique is this:
1. Choose healthy, strong plants.
2. Remove any remaining fruits so that the plants don't put energy into ripening them.
3. Remove any dead / dying leaves and any accumulated debris in the pots, to minimise the chances of fungal diseases.
4. Trim the plants back to about a third of their original size, cutting just above the leaf-joints.
5. Place the potted plants in pot-saucers on a light windowsill.
6. Keep the room warm-ish but not hot (nor cold). This will allow the chillis to survive but it will not tempt them to produce more growth. [I'm using a spare bedroom.]
7. Water sparingly, without adding plant food.
8. Check the plants frequently, removing any twigs or leaves that show signs of disease.

Hopefully this way the plants will survive, and in the Spring I will be able to gradually increase the temperature, and when conditions allow the plants will go back outside again.

Here is a pic of a chilli plant that has been trimmed to what I think is the right degree: 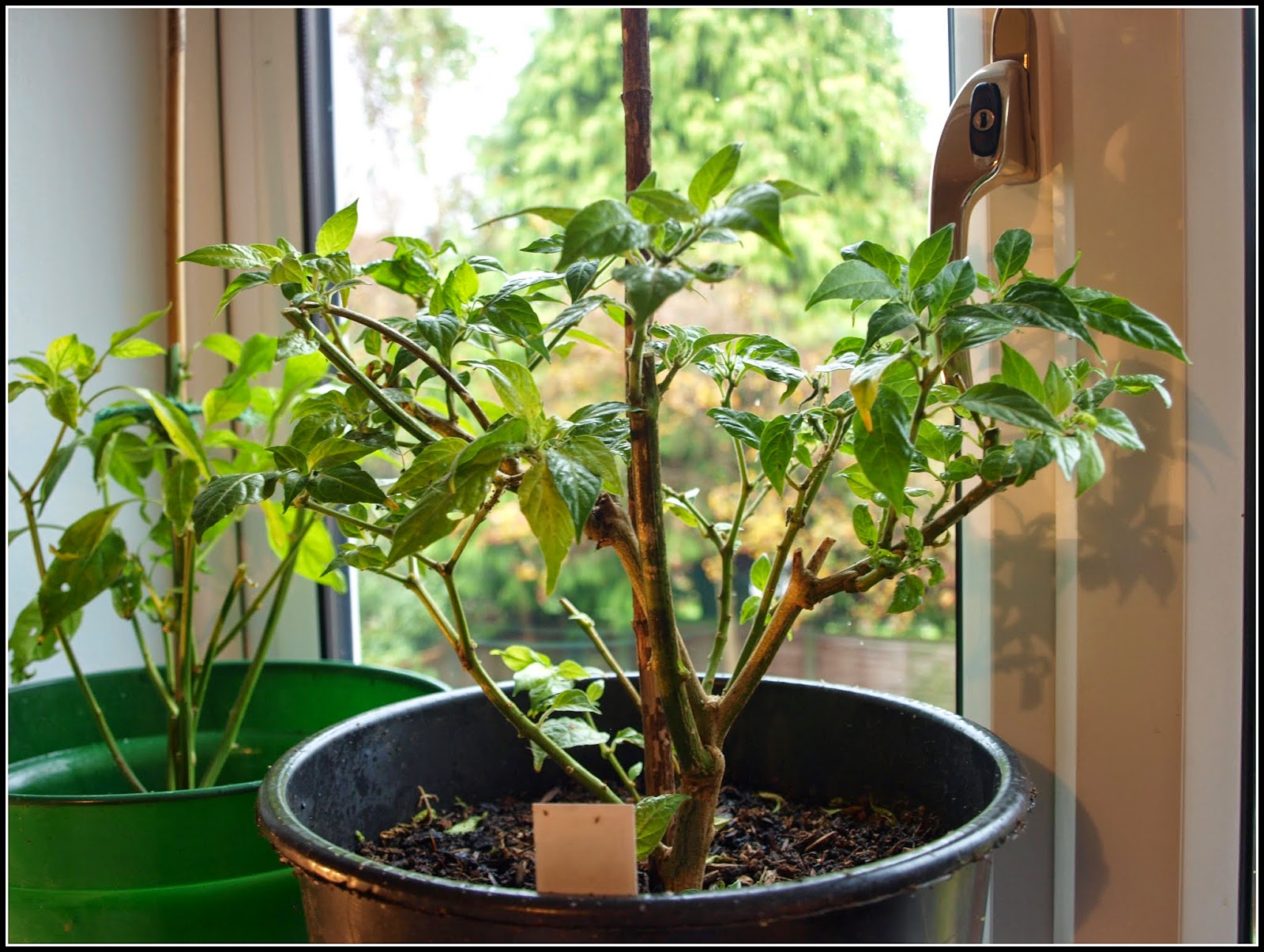 The plant is now about 12" tall. I have left the supporting cane in the pot to avoid root-disturbance.

Here is a photo of some of my chillis, lined up on the windowsill of our spare bedroom. The two at the left have been trimmed. 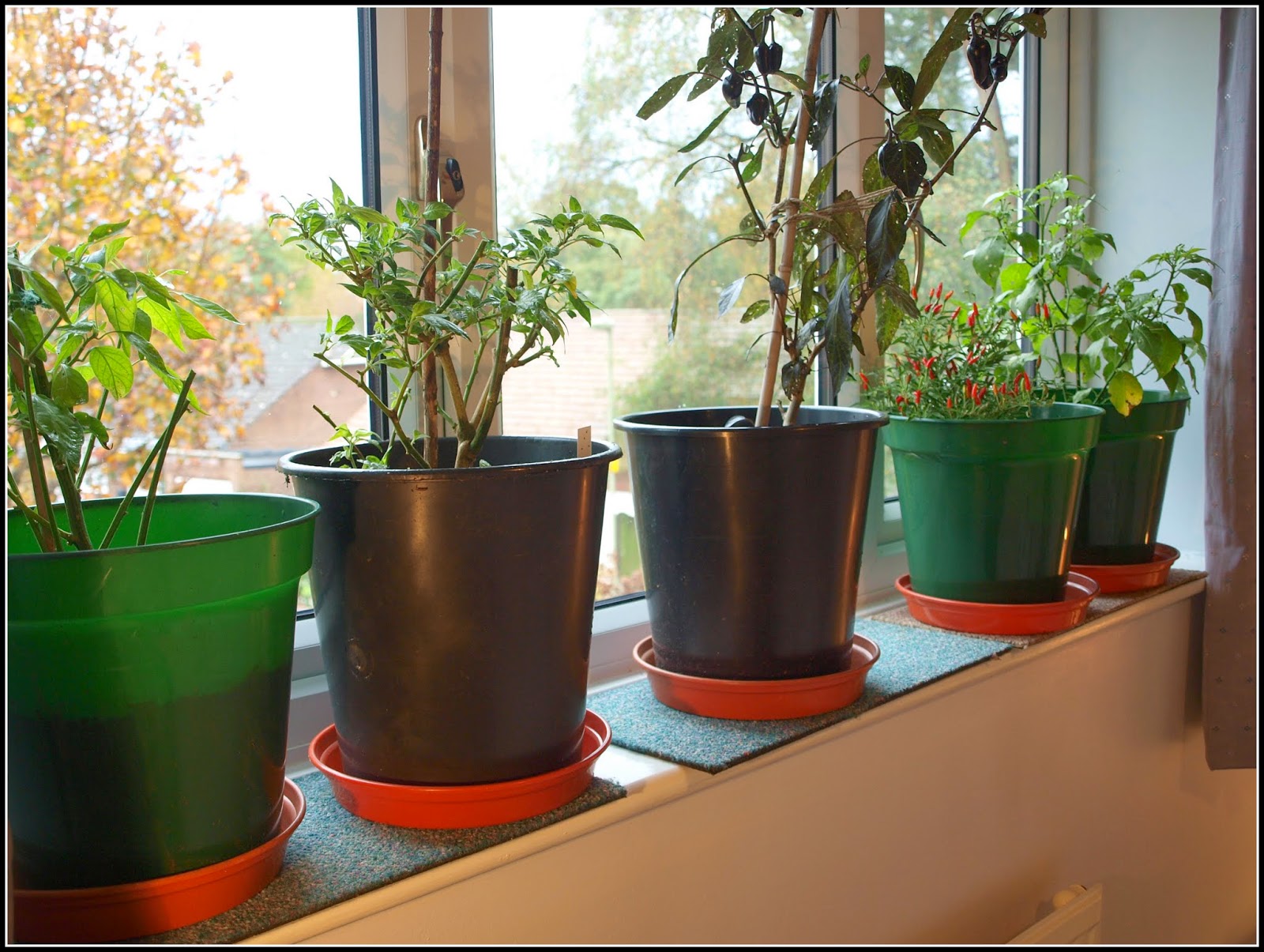 The plant second from the right is this one: 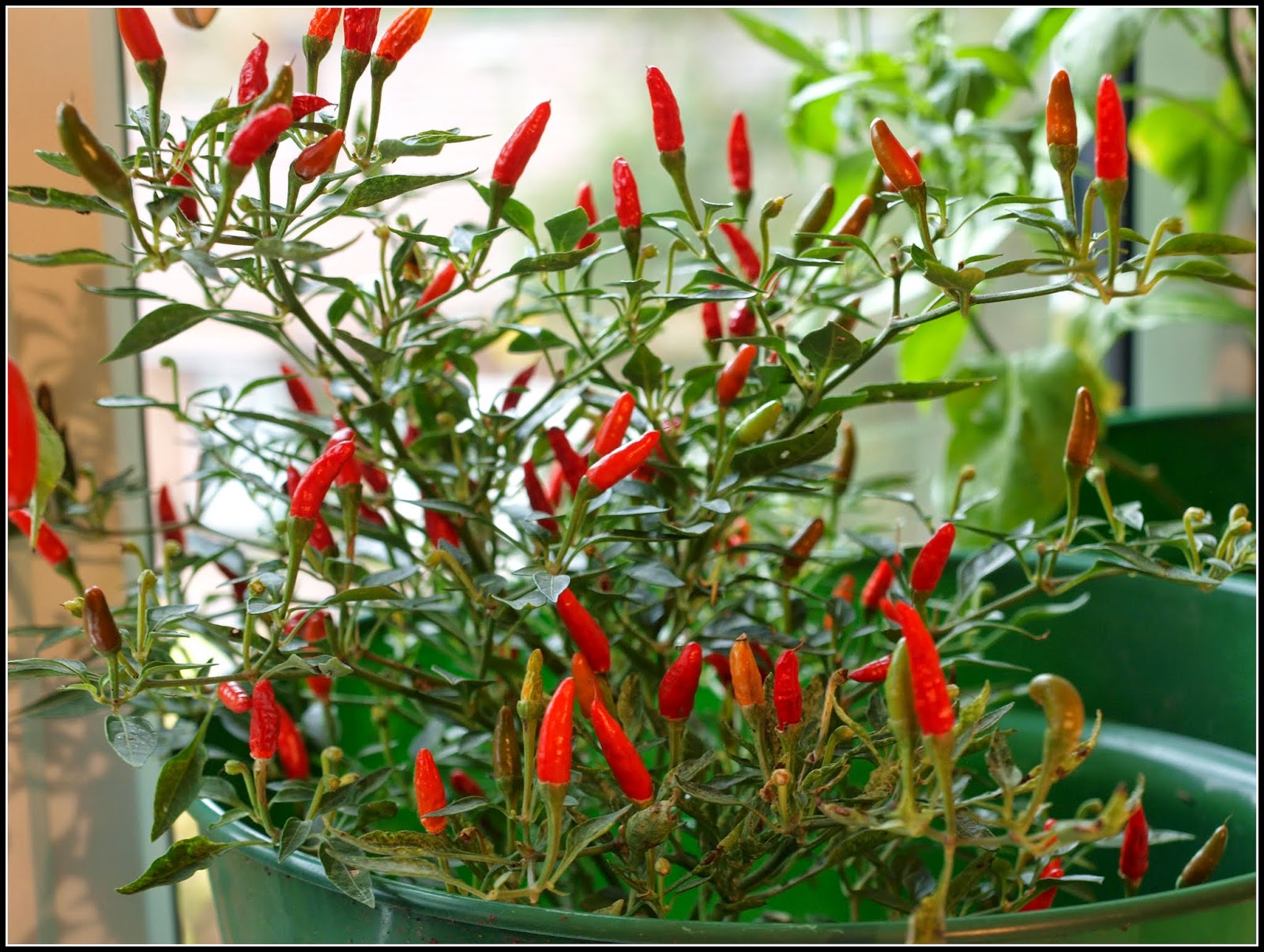 It is "Demon Red", whose bright red fruits are now beginning to shrivel, and they will eventually fall off. In the wild, a plant of this size would "secure the succession" by depositing on the soil near it a huge number of seeds, some of which would germinate to produce a new generation of plants. I think I will grow this type again from seed rather than trying to keep the plant.

While I'm on the subject of chillis, I want to show you this one: 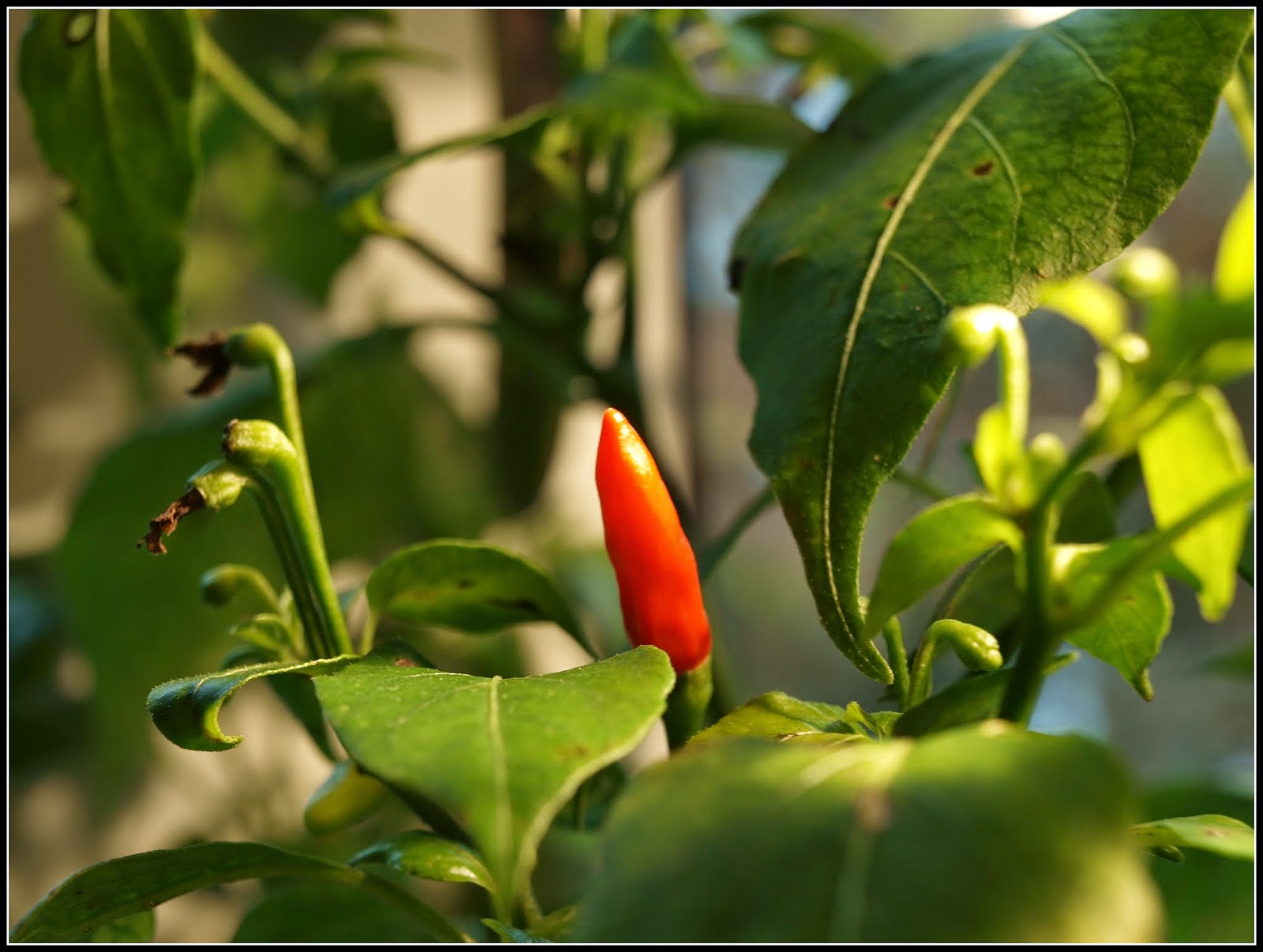 That is the one and only ripe fruit that has been produced by the "Bird's Eye" chilli plant which I have grown from seeds I rescued from some dried chillis that fell out of the packaging of a parcel of chilli-themed food products that Jane won as a prize in a competition. The plant has not done well at all. It rather belatedly produced a large number of tiny flowers, but they were mostly insignificant and did not set fruit.(See left of photo above). It was an interesting experiment, but not one that I will be repeating!

Several of my friends have kindly sent me chilli seeds, so I want to publicly acknowledge that. Thank You to all for your generous gifts! I now have so many chilli seeds that I will have to think VERY carefully about what I will be able to make space for...
Posted by Mark Willis at 12:00