I always have lots of herbs growing in my garden, but now I have even more. Jane won in a competition an "Instant Compact Herb Garden" from Rocket Gardens, so of course she has passed them over to me. The name was somewhat of a misnomer, because although she won the prize round about Christmas-time, it was only delivered in mid-May! It was however compact... The kit included small plants of 8 different herbs. The contents of the kit varies according to the season, but the ones we received were
Rosemary, Thyme, Sage, Marjoram, Chives, Flat-leaf Parsley, Pineapple Mint and Garden Mint.

For various reasons I did not find the opportunity to plant the herbs permanently until last weekend. Initially I was unsure about where to plant them. These things take careful thought you know! There is not much space in my garden (certainly not vacant space), so I had to move things round a bit. I transplanted the Primroses that had been growing in my rectangular "Cotswold stone" planter, and have put four of the herbs into it: 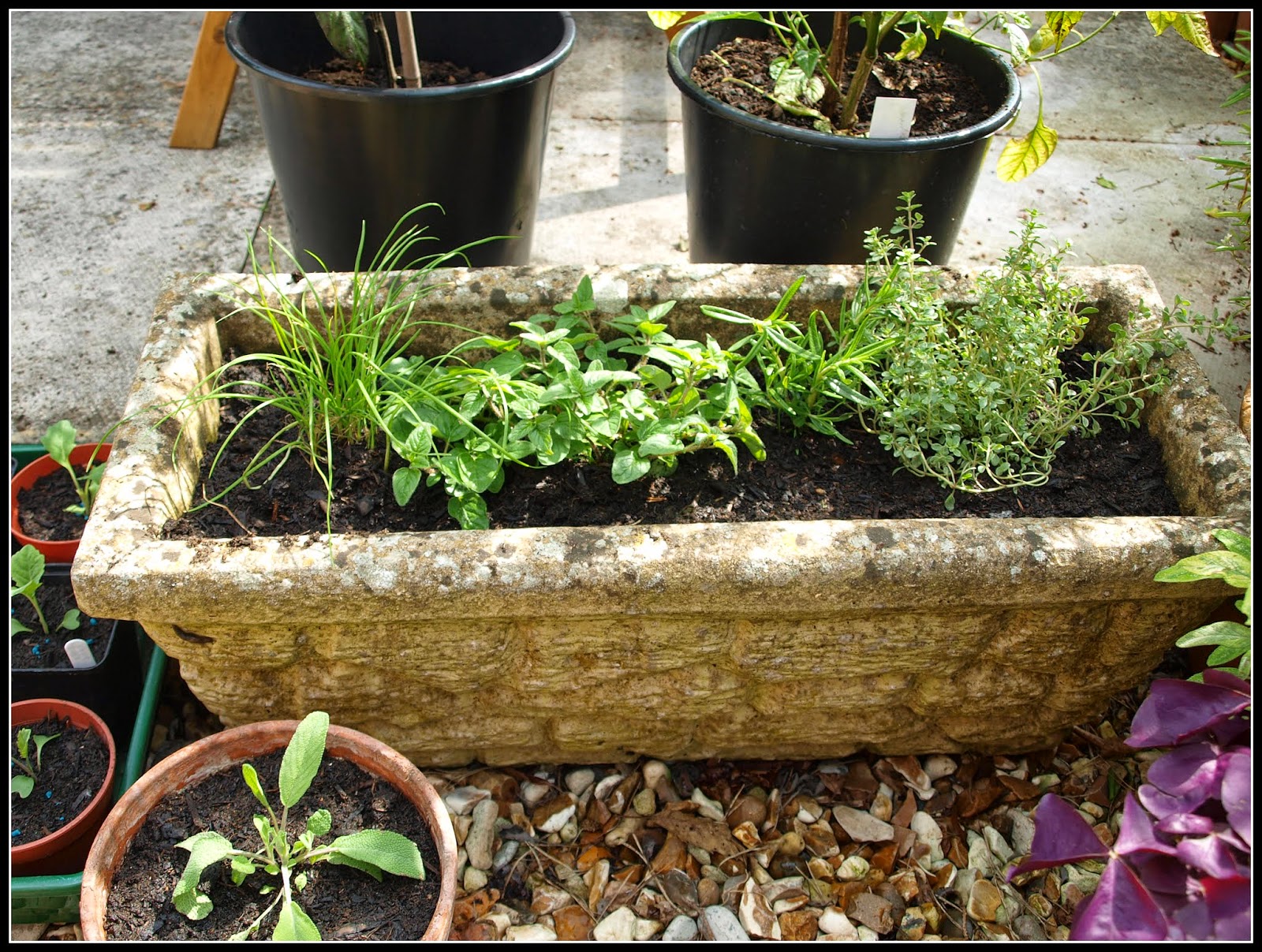 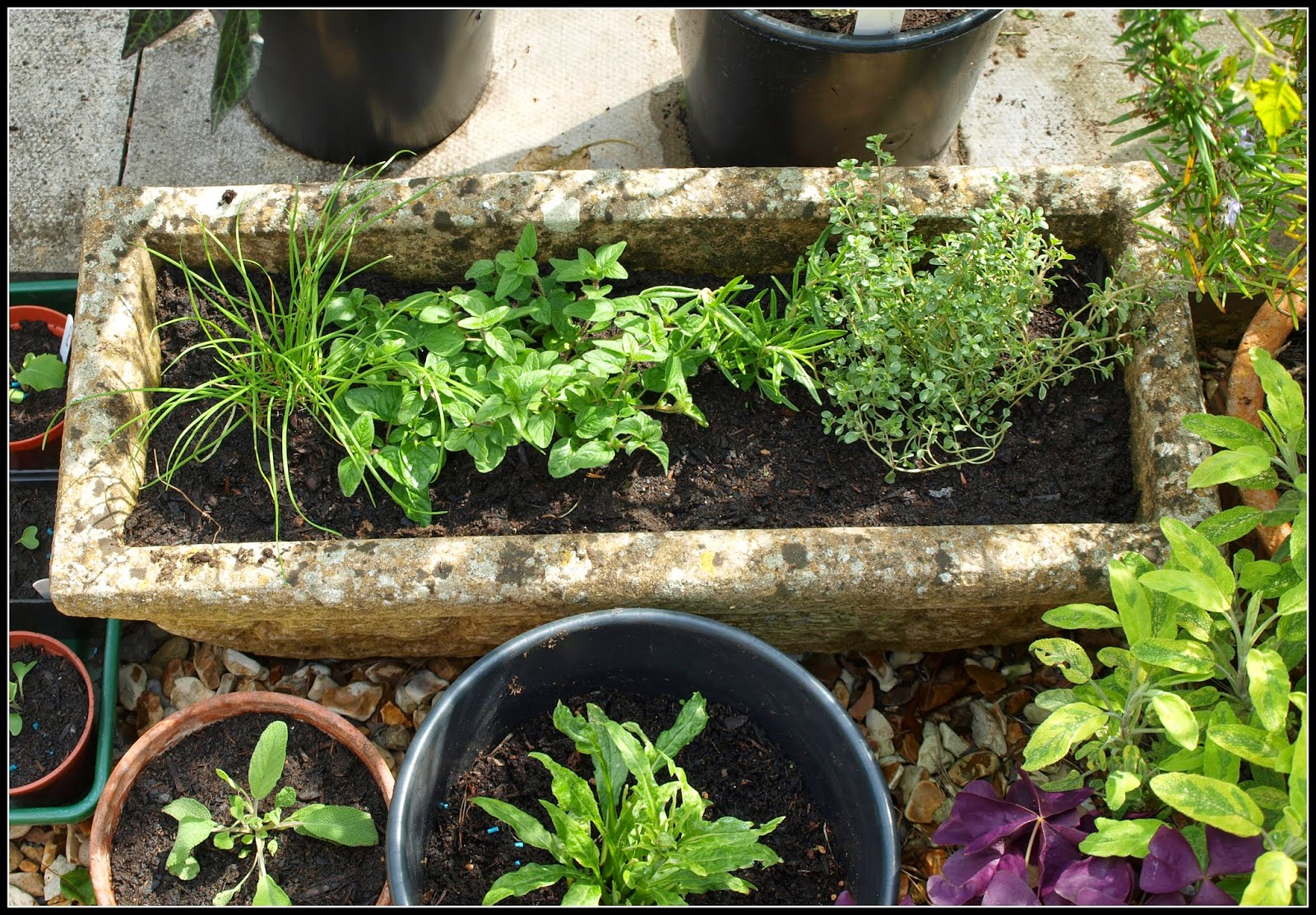 The Sage plant has gone into a small terracotta pot (you can see it at the bottom left in the photo above). It is a very small plant and I felt it might easily get swamped, so I will grow it on and plant it out in a permanent position a bit later on.

Since Mint is inclined to be invasive I'm taking no chances with it. The Pineapple Mint has gone into a big plastic pot where it can be contained easily. 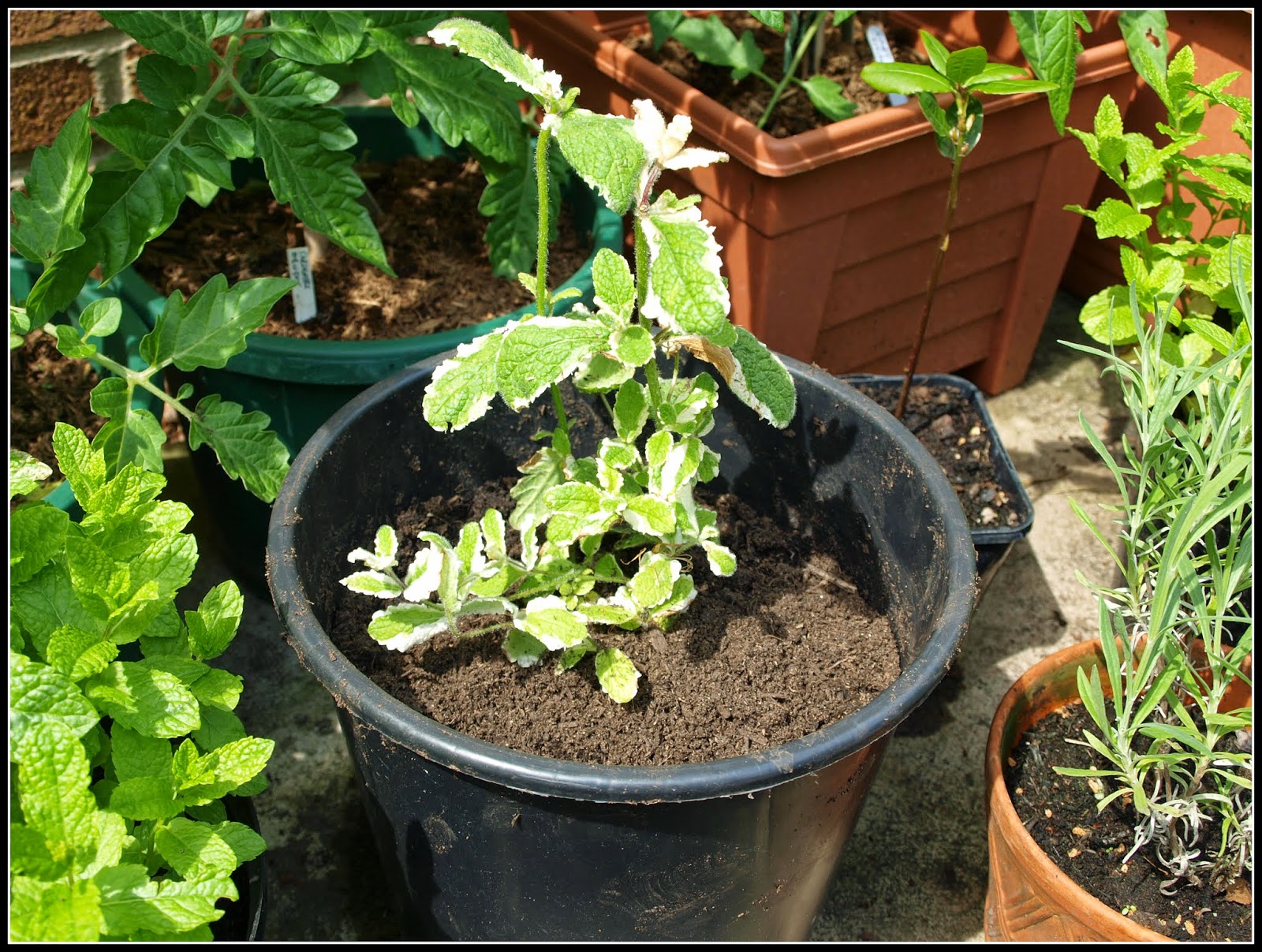 And the Garden Mint has gone in amongst the Aquilegias along the side of the house - not a prime position by any stretch of the imagination, but if anything can thrive there, the Mint is it! 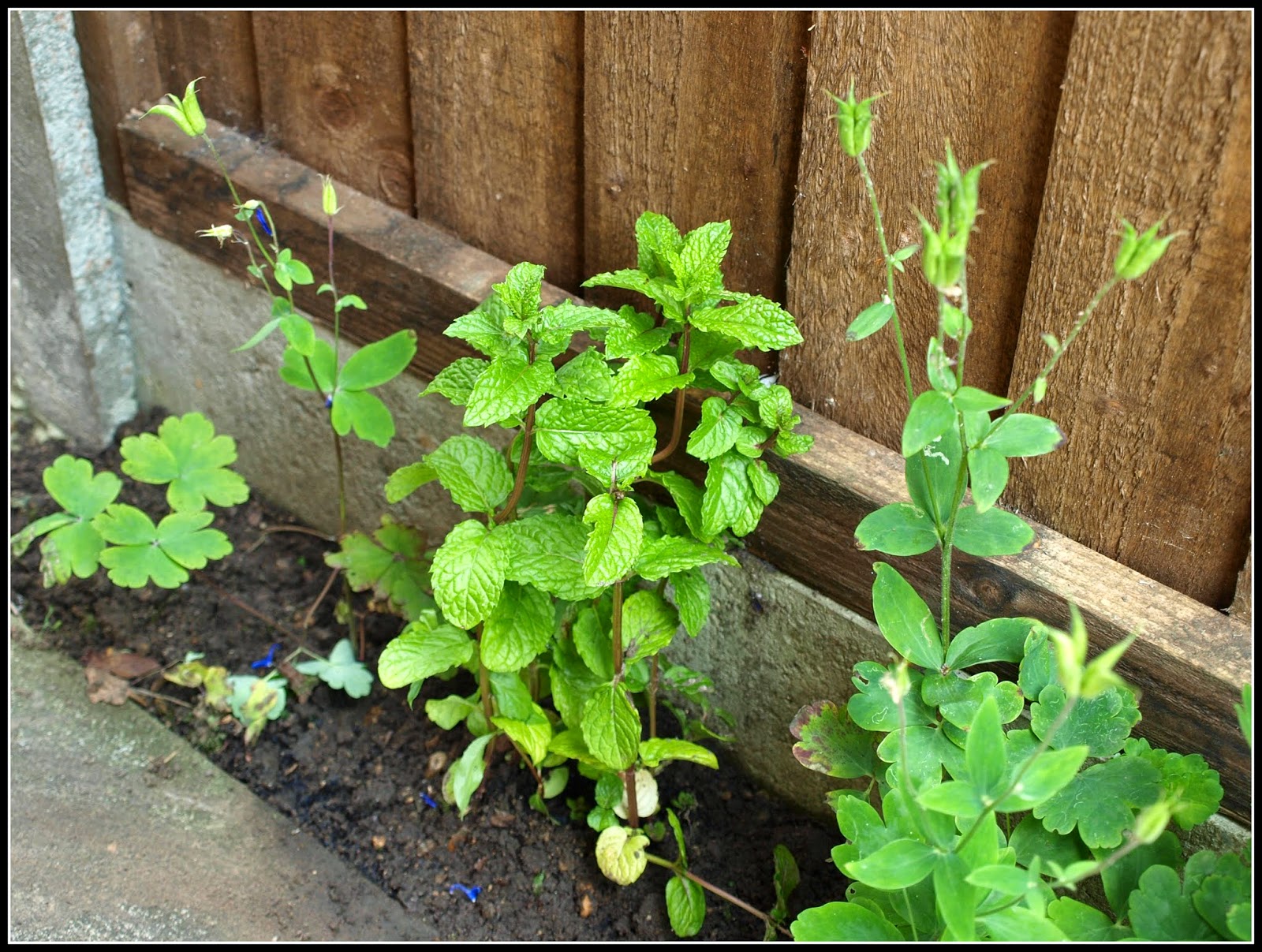 The least promising of the 8 plants is probably the Flat-leaf Parsley. Well, actually the problem is that it is not just "a" plant. It's about a hundred, all crammed into the one little pot, so they are very leggy and under-nourished. I have put the whole clump into a little space in one of the borders and we'll see what happens, but I'm not expecting any great results. 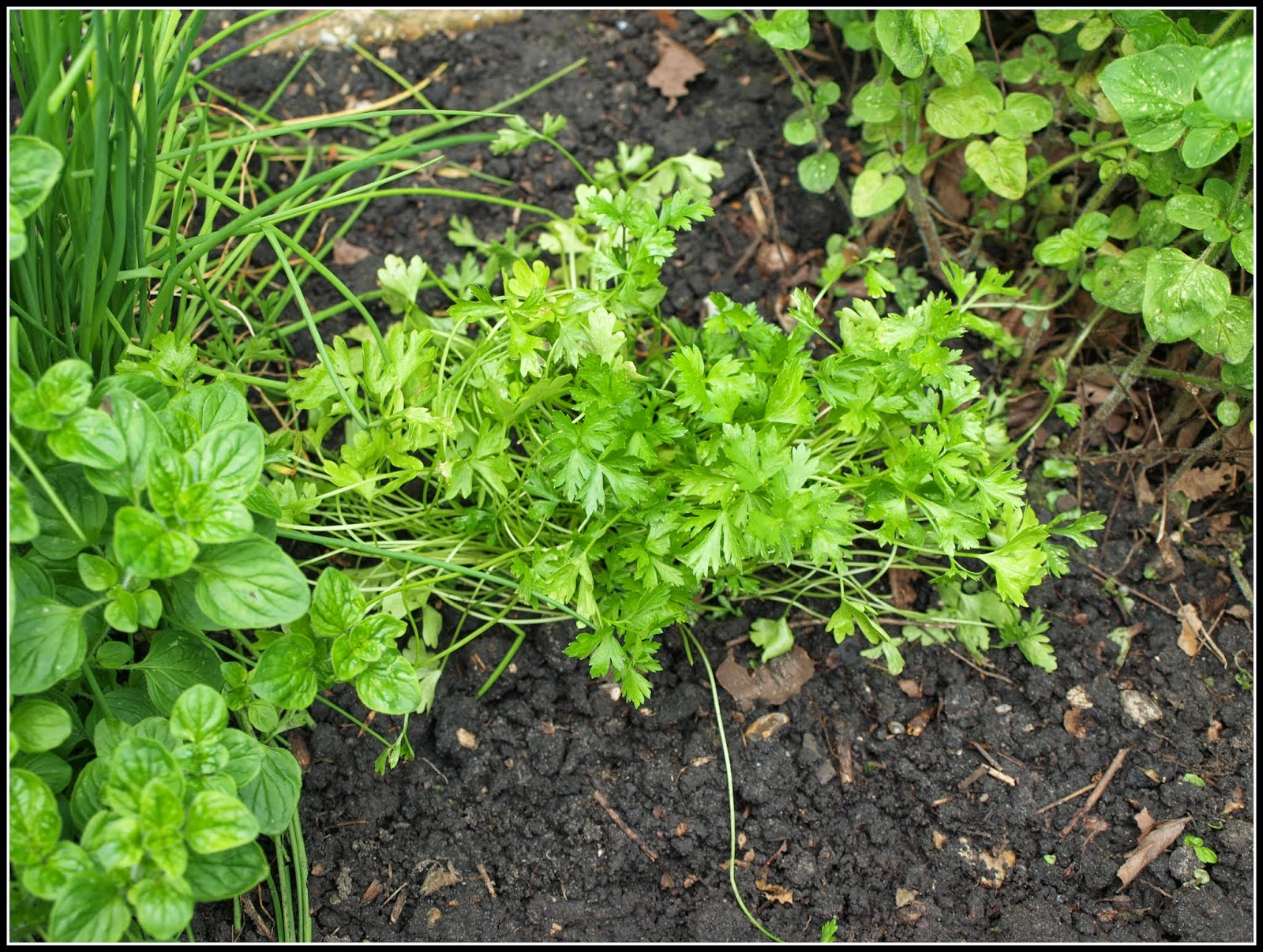 Some of the older, well-established pots of herbs are looking good right now. Here you can see Greek Oregano, Moroccan Mint and Thyme and Chives - with some Aquilegia plants too. 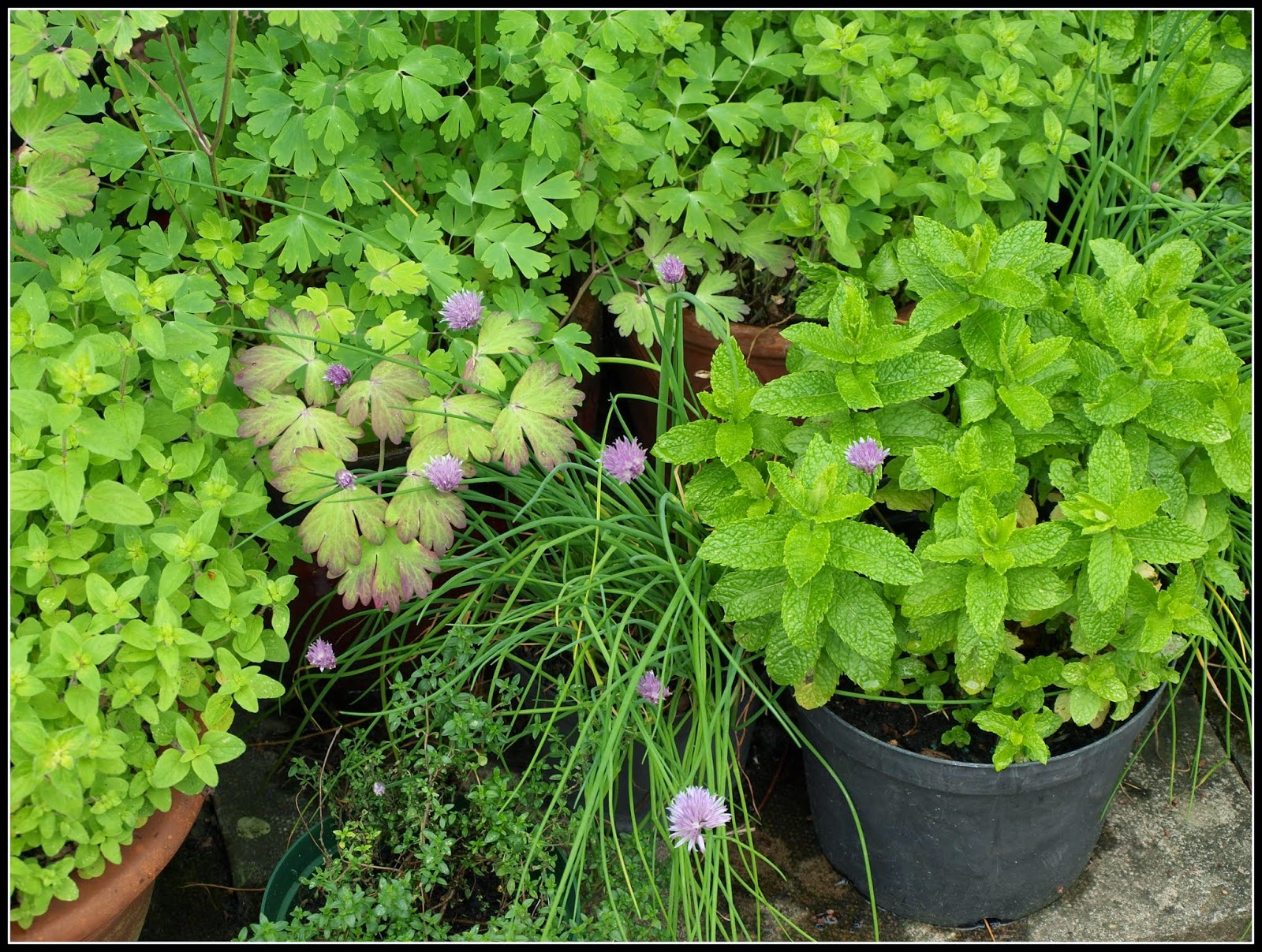 The Aquilegia is over now, but the leaves have taken on a sort of purple tinge, particularly at the edges. I think it looks quite pretty next to the Chive flowers. 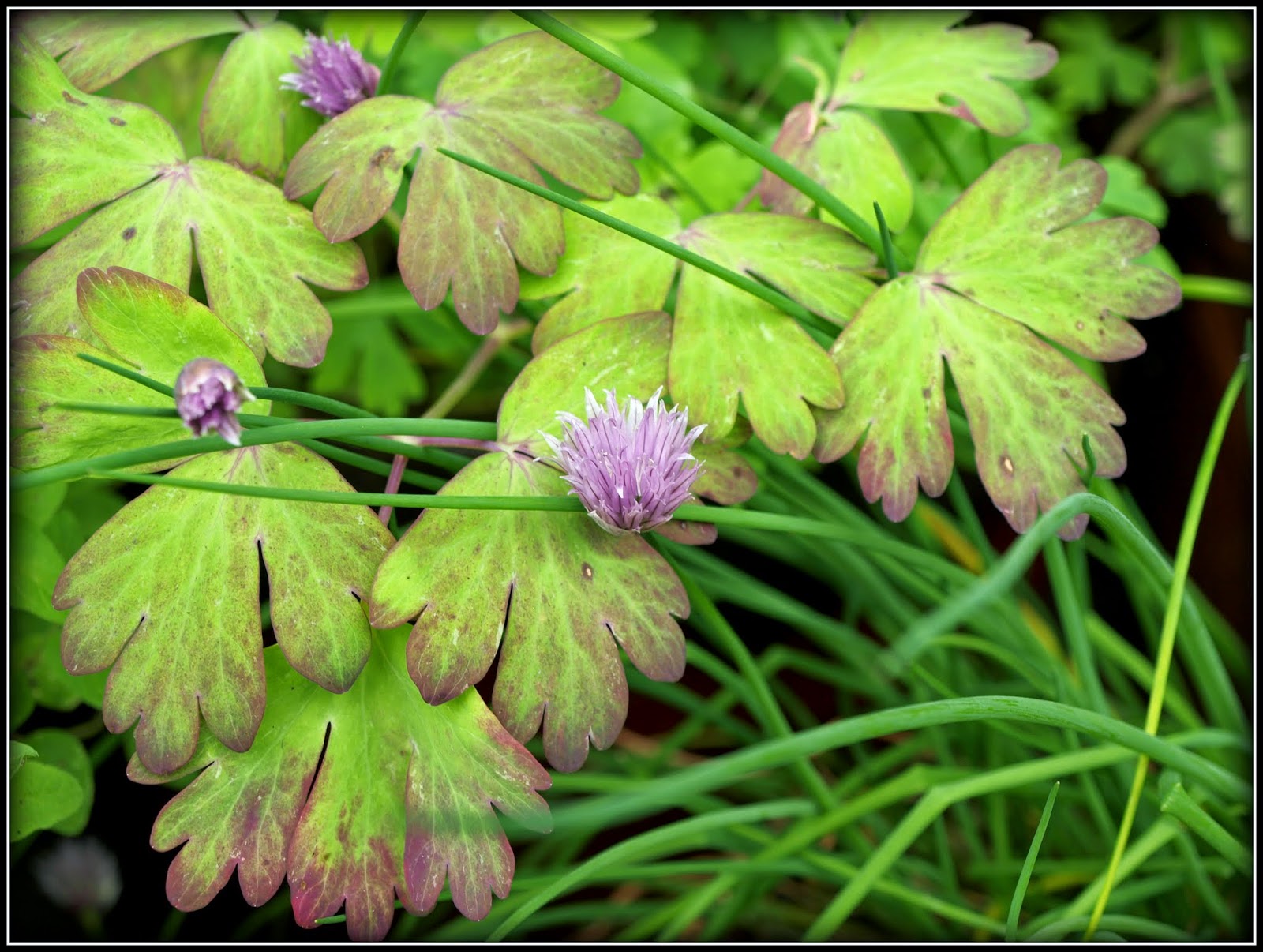 Meanwhile, in the border... This is Sage. 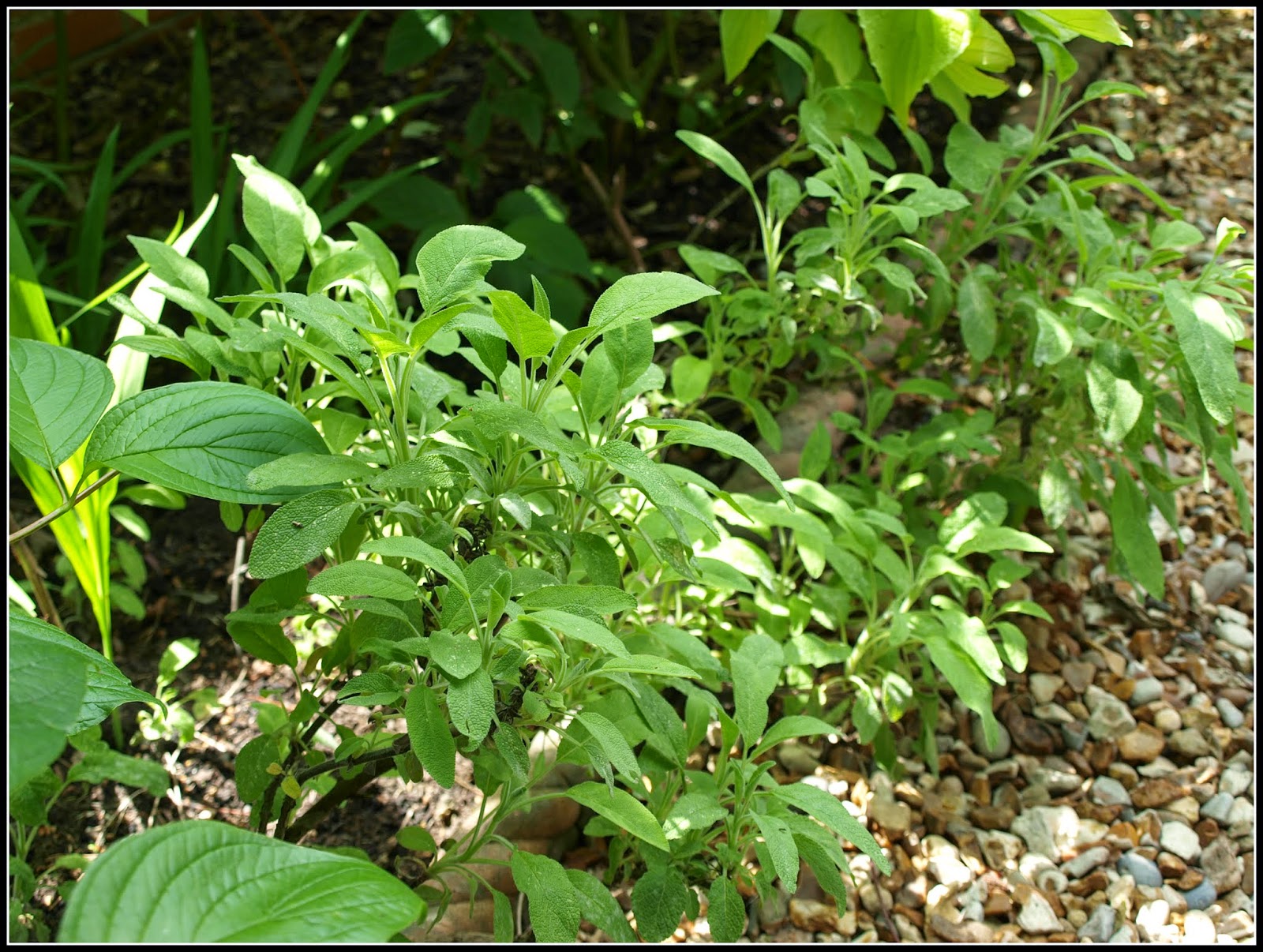 This is Winter Savory. Ironically, the plant which I had in a pot inside a coldframe died during the Winter, but this one, out in the open, survived. 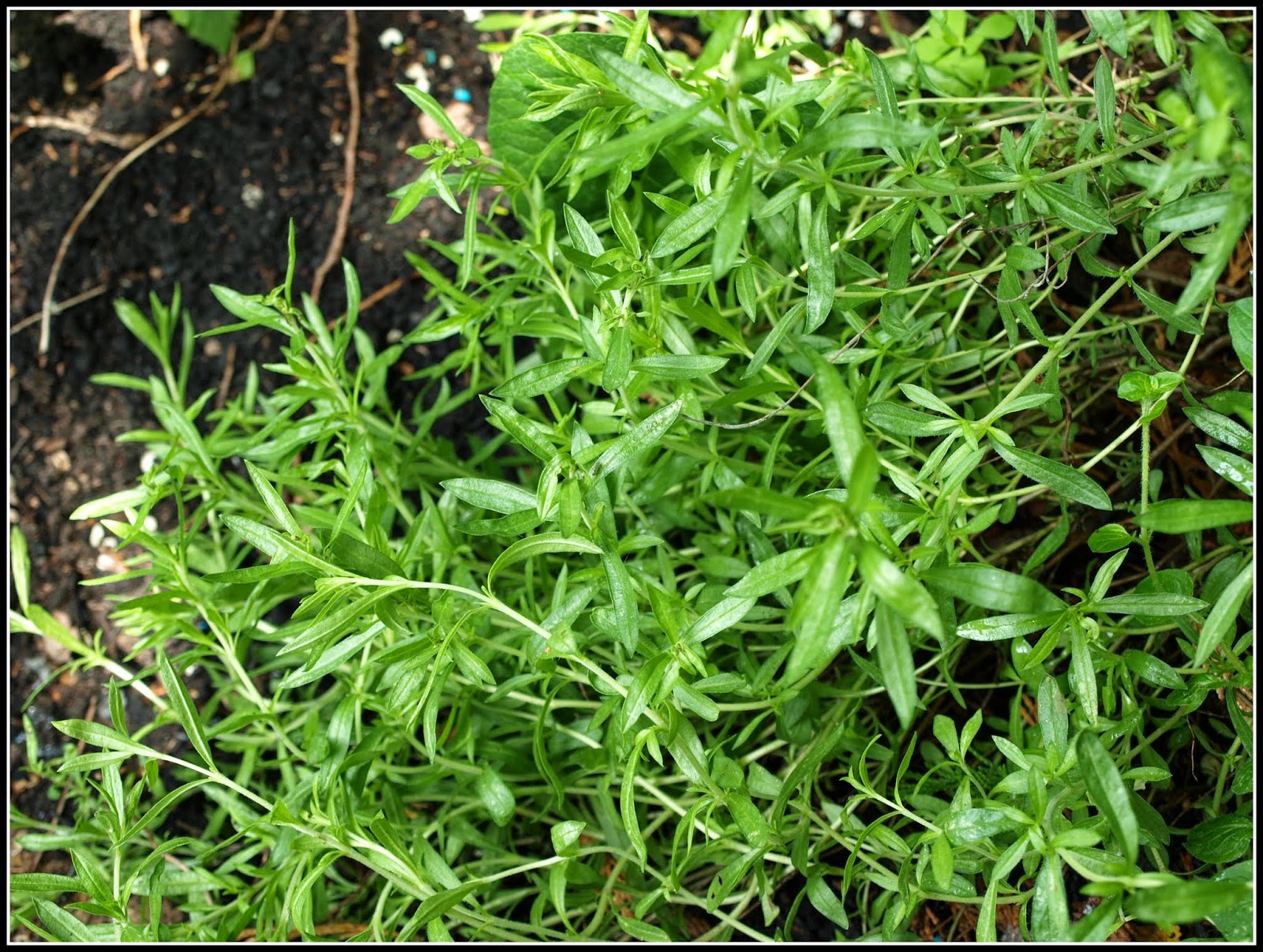 This is feathery Fennel, with Golden Hops climbing the fence behind it. 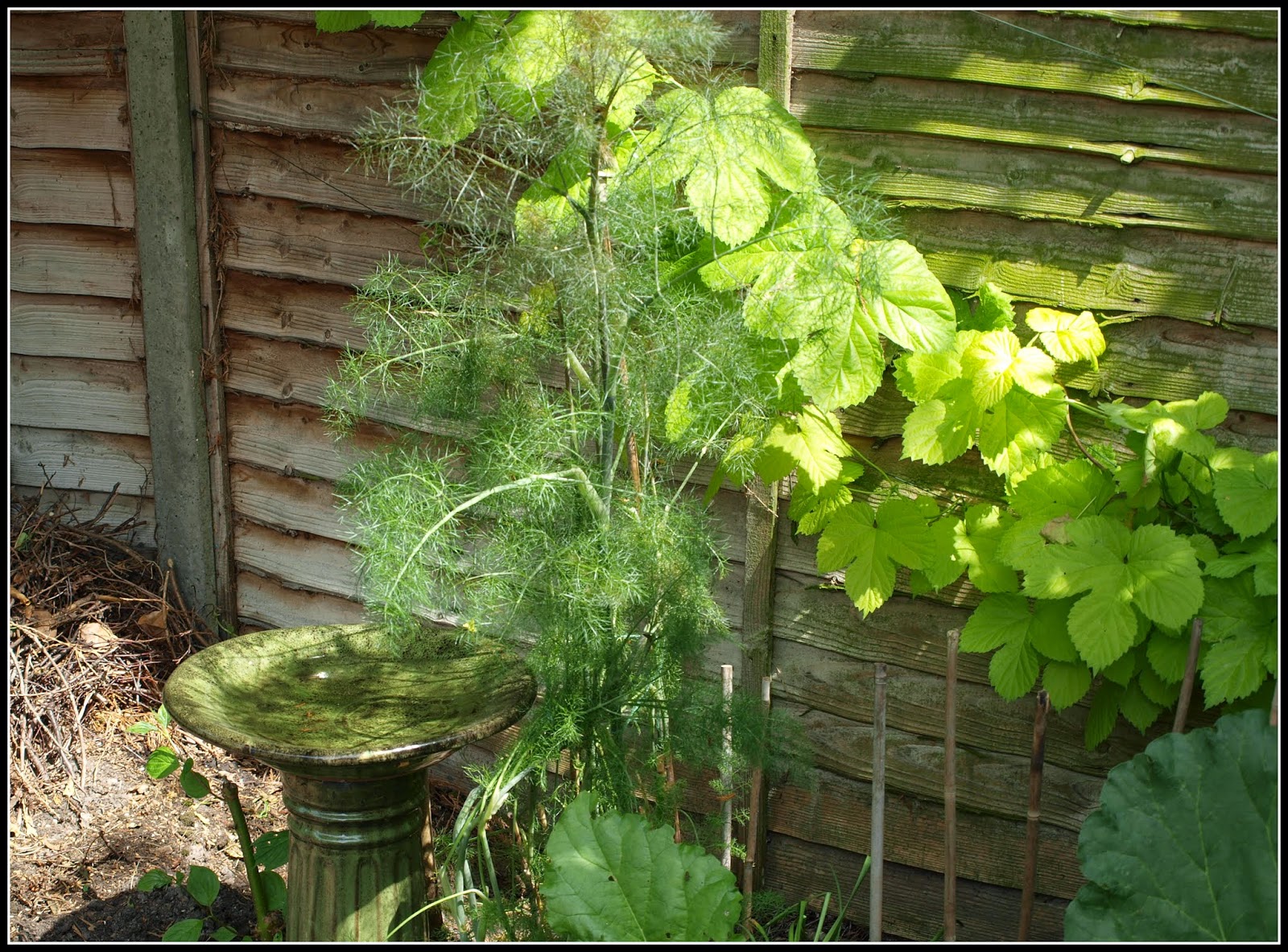 The Lemon Balm is huge now... 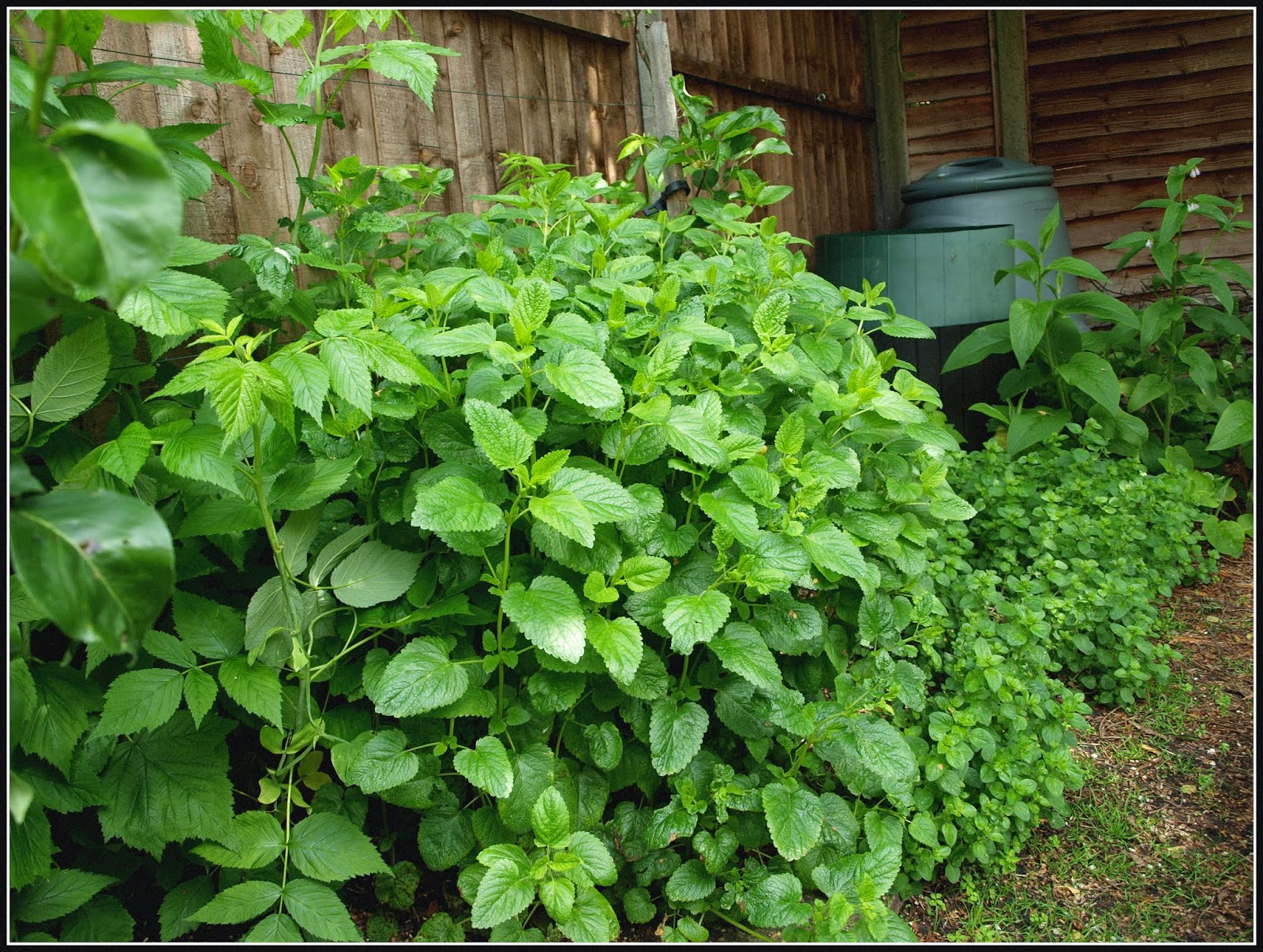 This Broad-leaved Thyme. In the Winter this plant was practically bare and I thought it would die. Just look at it now! 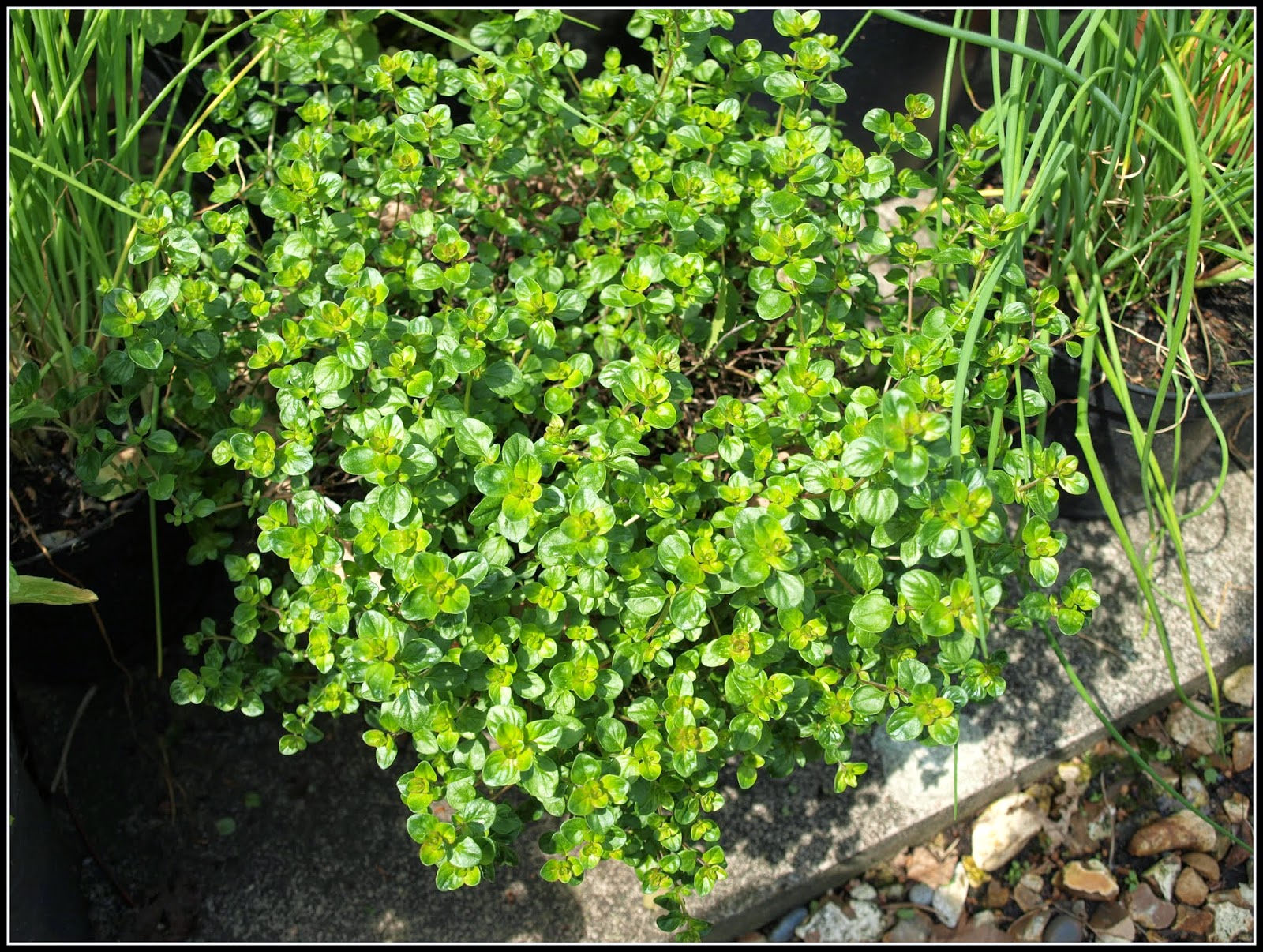 To finish off for today, here's a photo of my up-and-coming Bay tree (It has a long way to go still!). 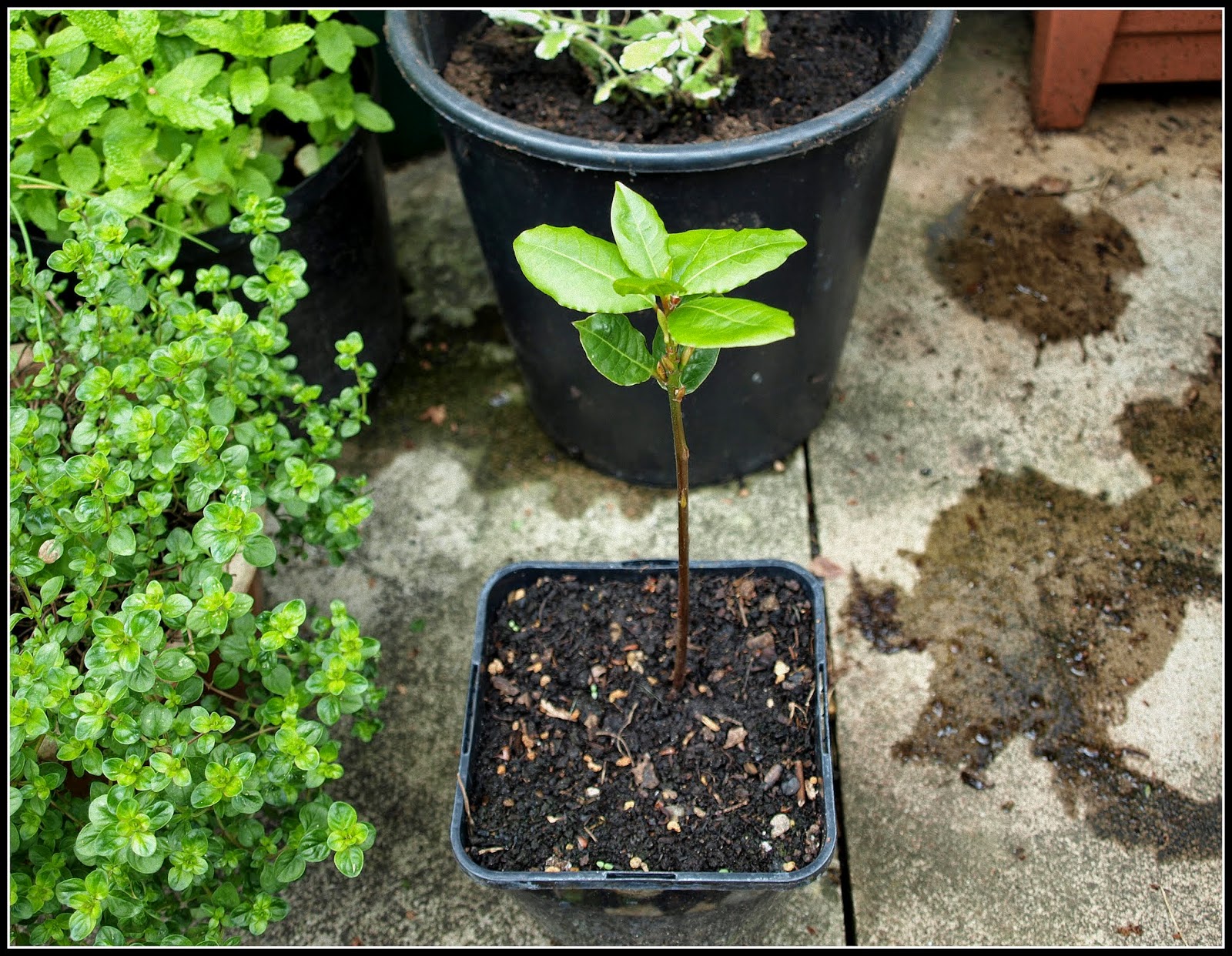 This little chap is destined to replace one of my potted "standard" Bay trees. It started life as a sucker (offshoot) of the big Bay tree at the bottom of the garden, coming up just a couple of inches away from the main trunk. I used a sharp knife to sever it just below ground level (where it was still white), then potted it up in some damp compost. It has evidently rooted well, because it has all those fresh young leaves at the top. In another five years or so I should have a viable tree!  ﻿
Posted by Mark Willis at 12:00