What's in the garden today?

The Philadelphus is late flowering this year. Normallly I expect it to flower in mid-May, but this year it has been about 3 weeks later than usual. 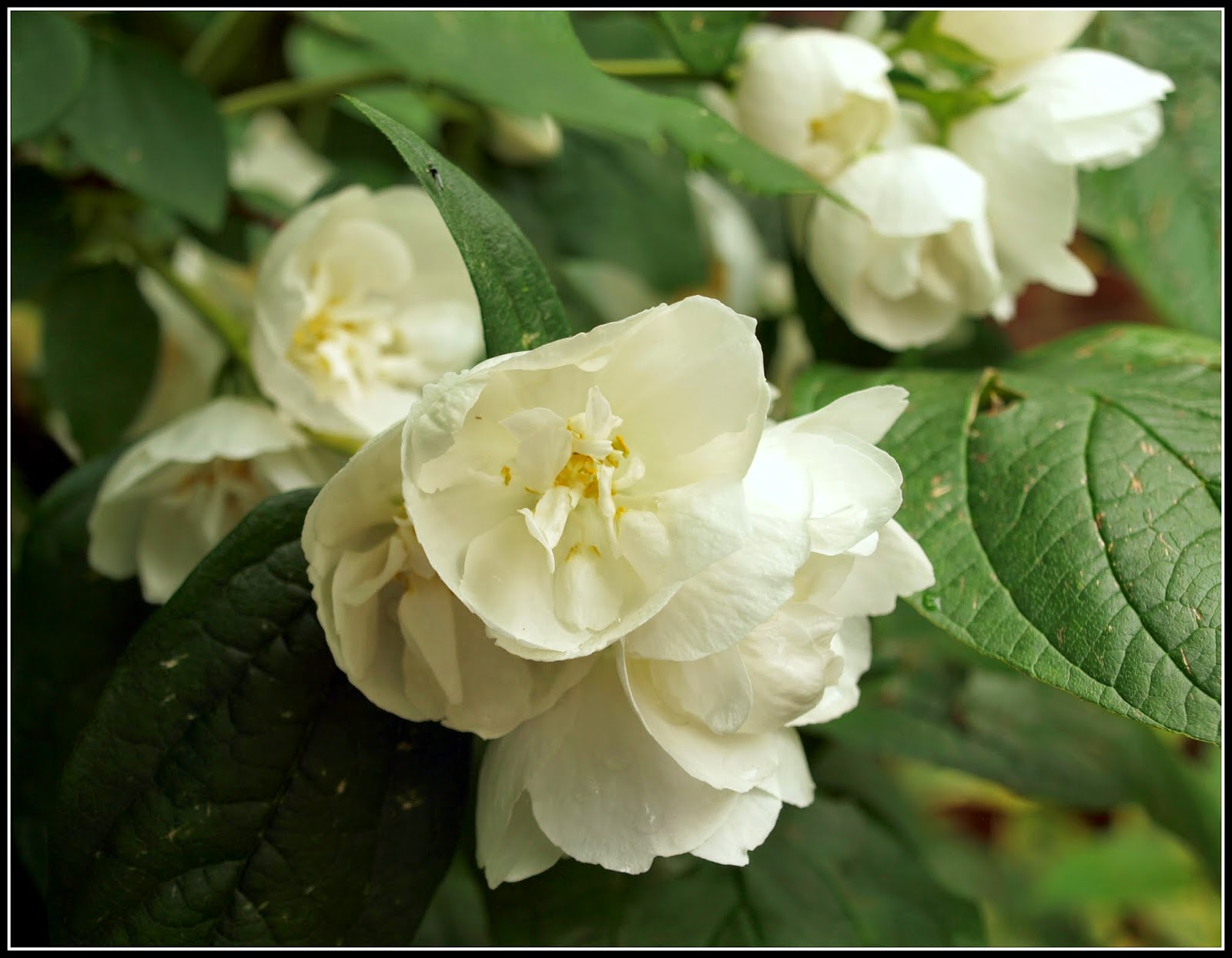 Last year I cut the bush back very hard, and it grew lots of new branches, which are now covered in blossoms. 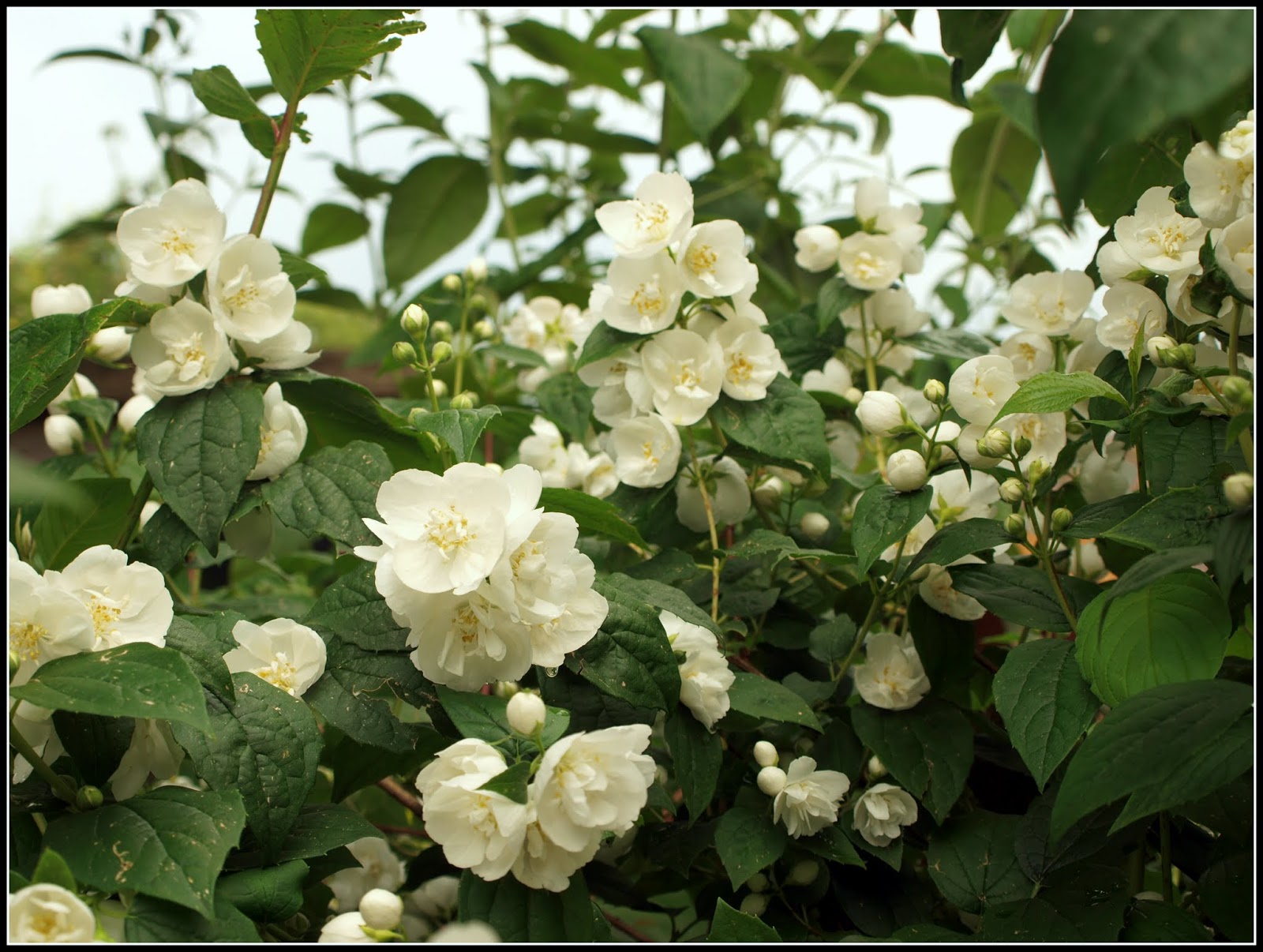 Near the micro-pond I have three or four Hardy Geraniums. This delicate pale one is flowering at present, in amongst the unruly seed-heads of the Red-veined Sorrel. 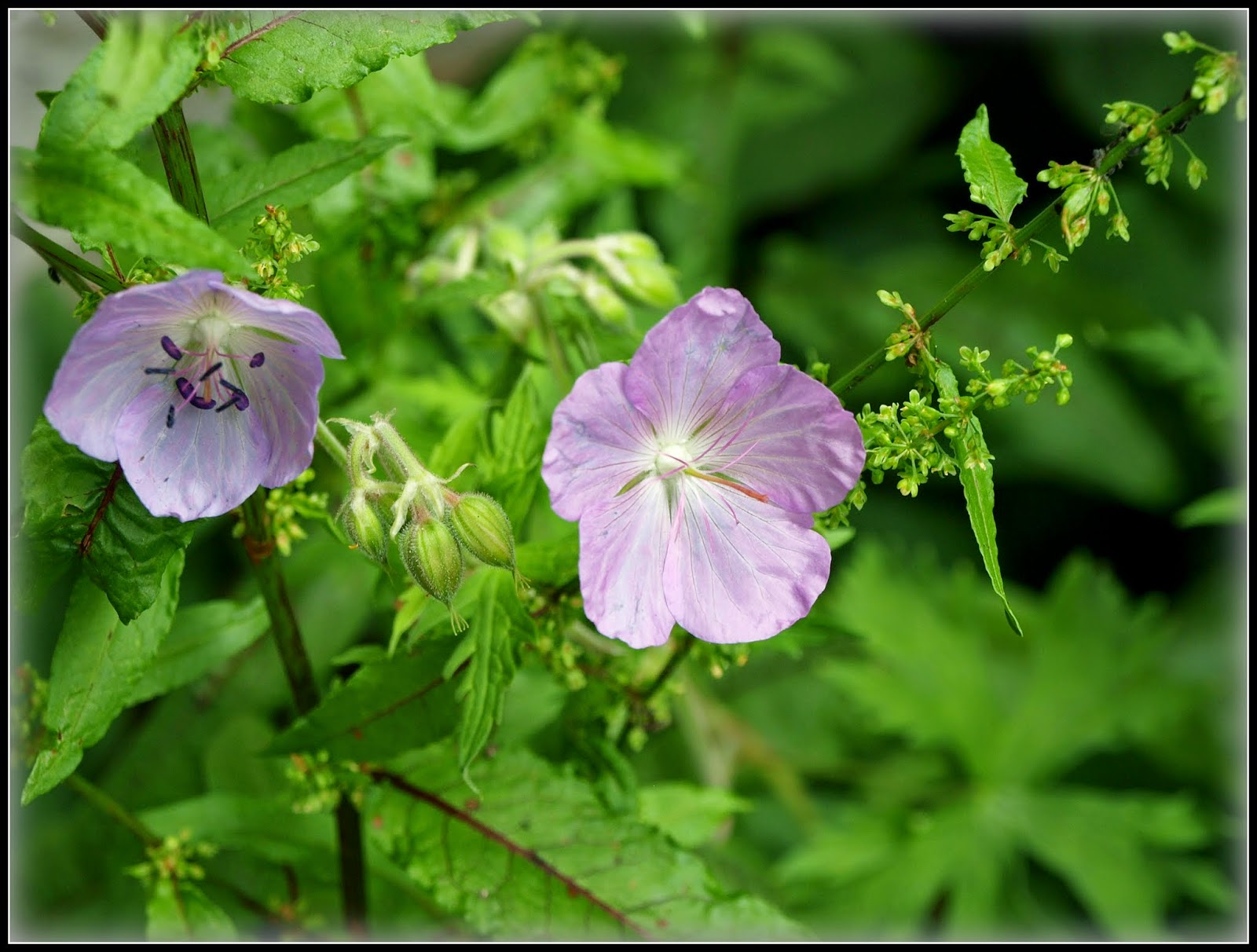 This cheeky Purple Sage has decided to spoil the symmetry of the big fern growing next door: 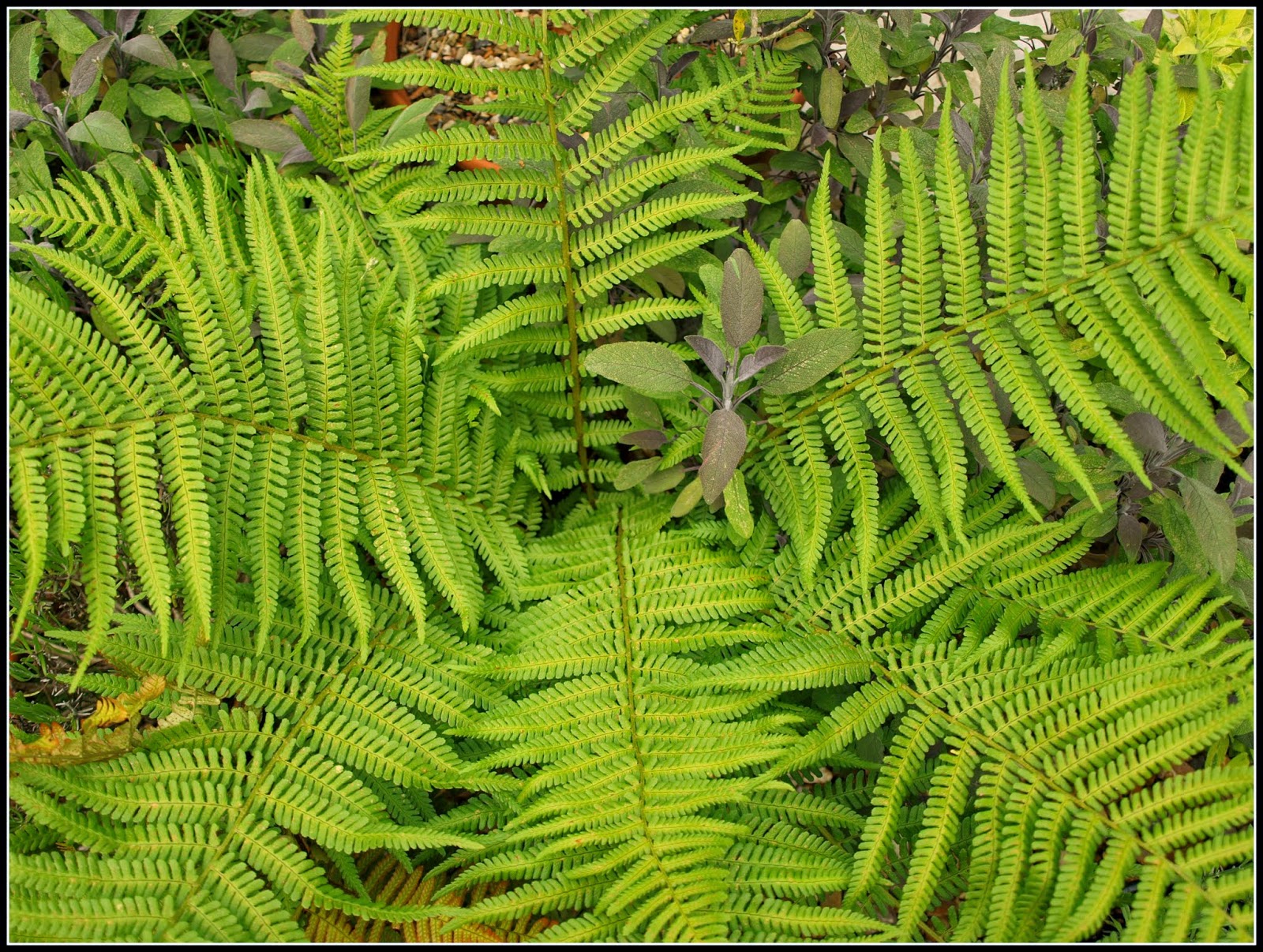 The very first Sweet Pea flower is just showing some colour. My Sweet Peas have grown very slowly, but in the last couple of weeks they have responded well to the higher temperatures. If I grow them again I think I will sow them much later. There is practically no sign of the first ones I sowed; they almost all died, I think because the weather wasn't right for them, whereas the second batch have done a lot better. 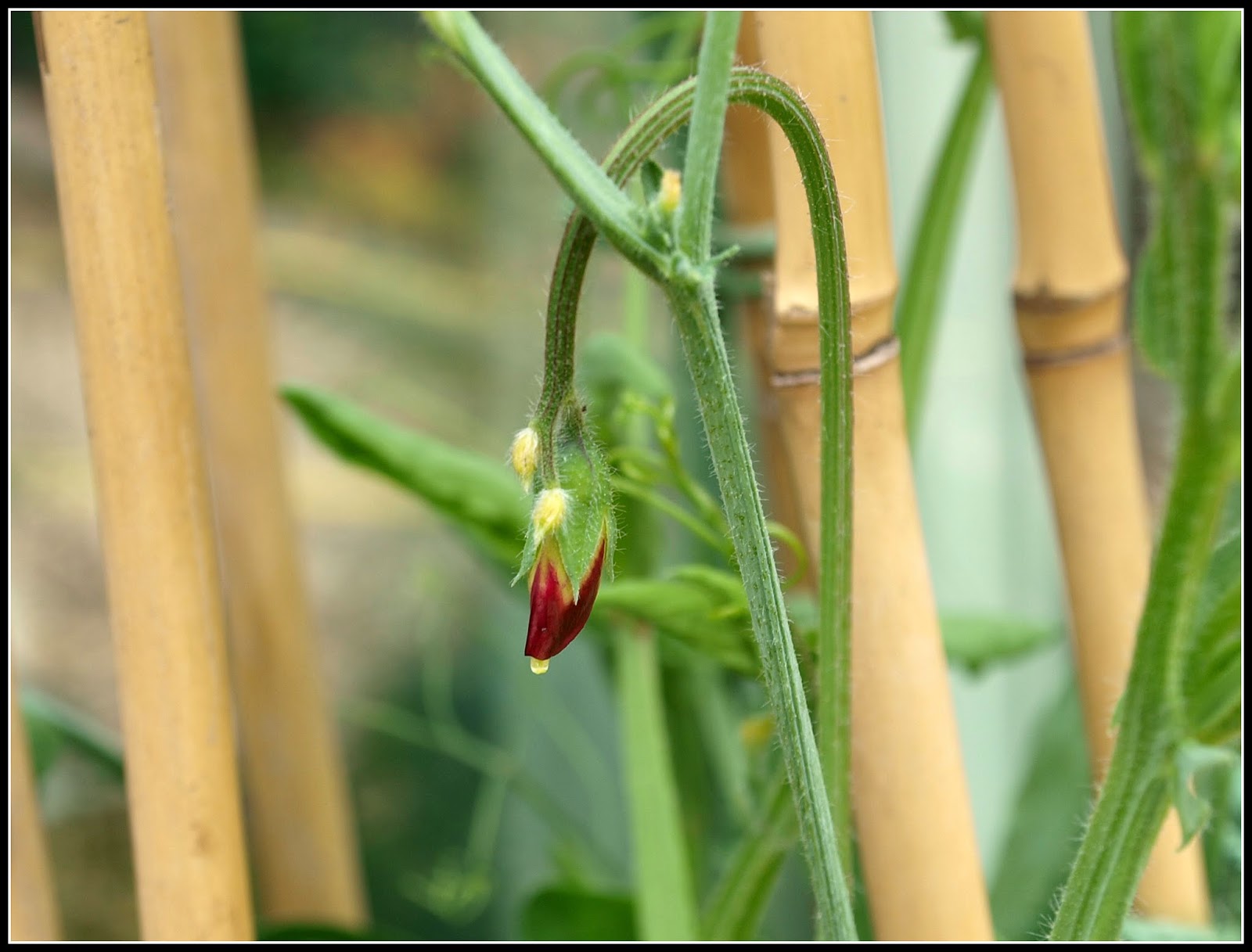 ﻿
I have stopped harvesting Asparagus for this year, and I am just leaving any spears that come up now to form fern. This will allow the plants to regain their strength over the Summer. The crop this year, although not abundant, was the best I have ever had, so I won't be digging up the Asparagus just yet after all. 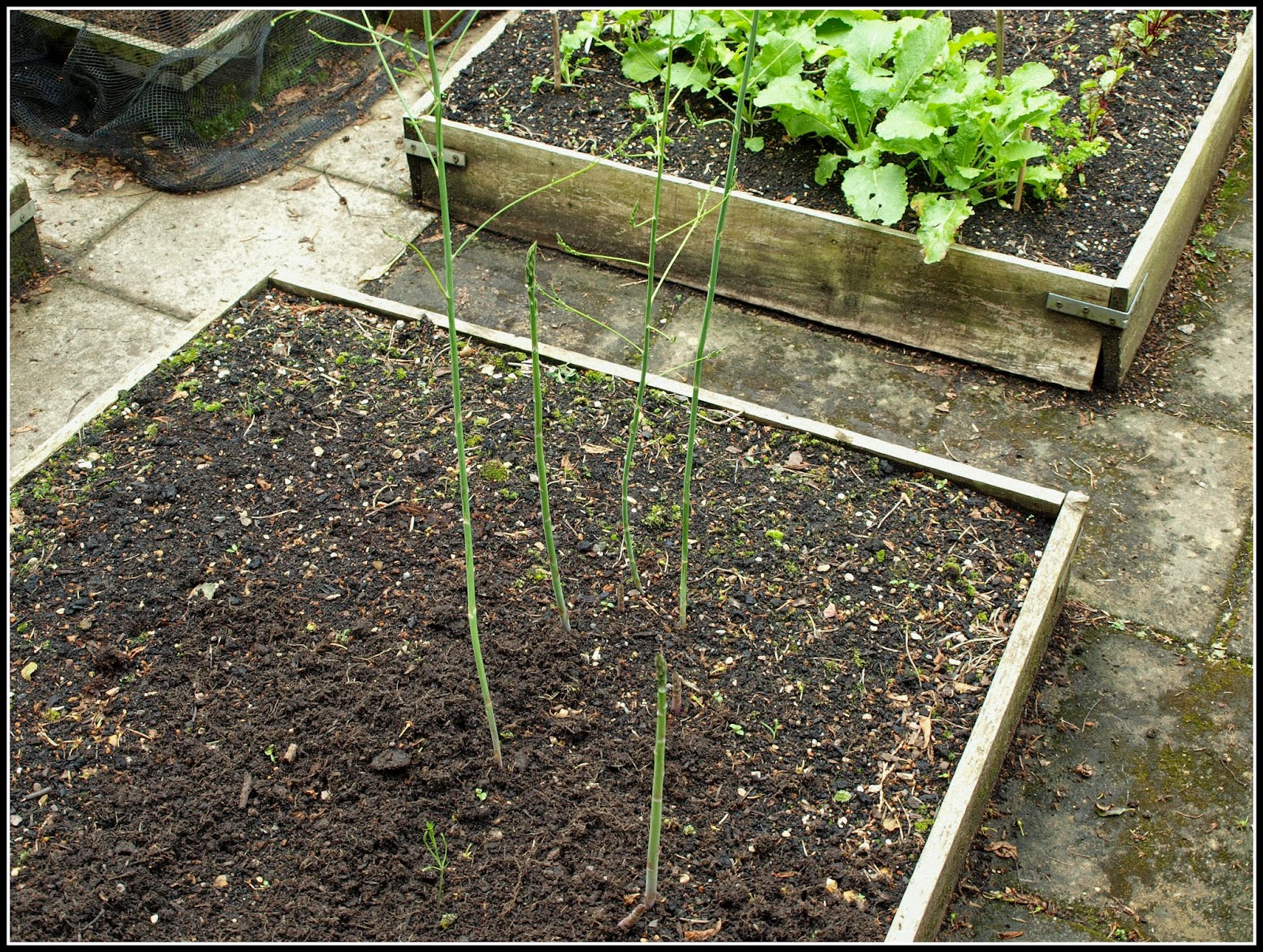 After their shaky start, the Runner Beans are looking fine now, and the first flowers are beginning to appear. 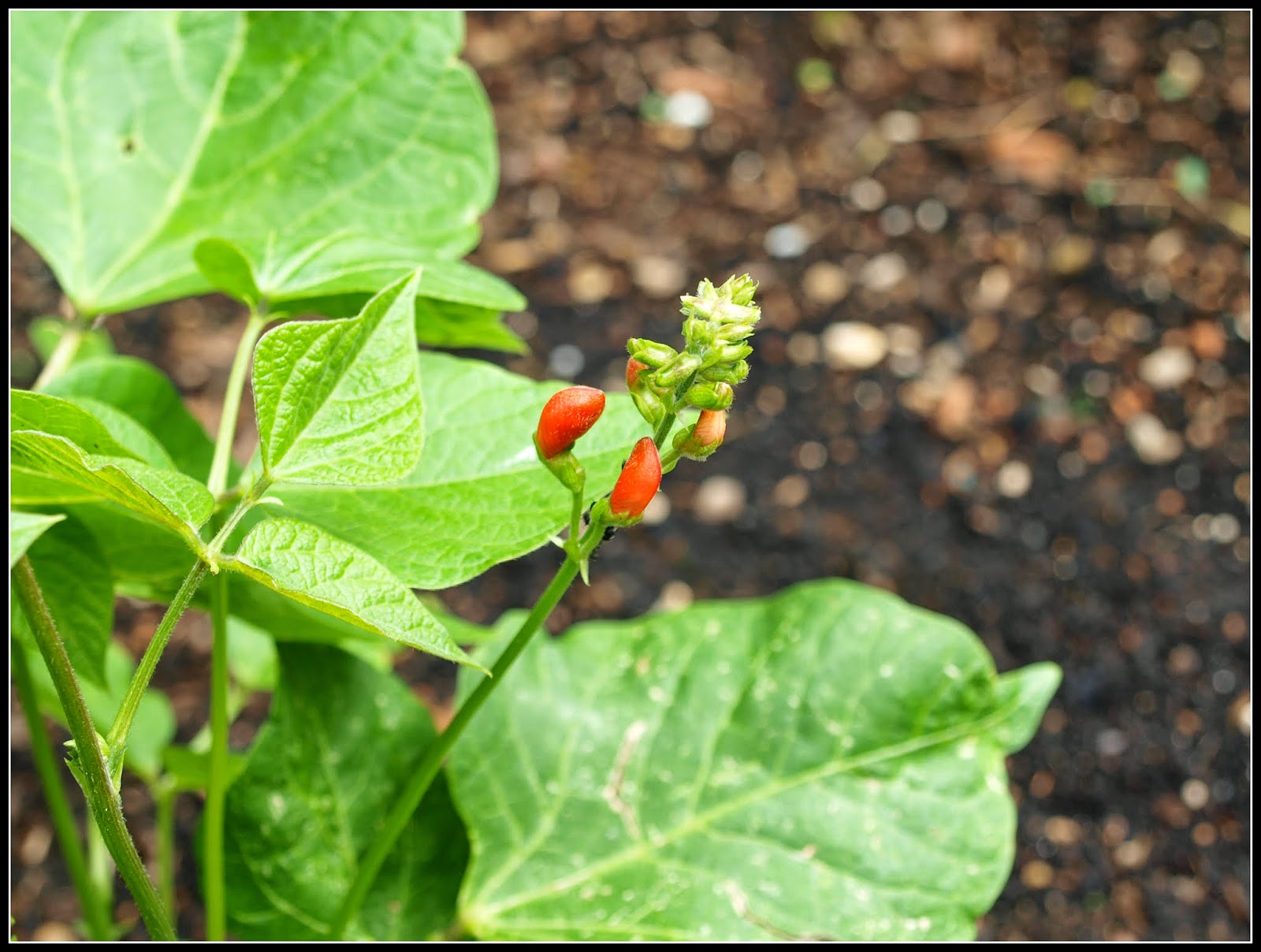 The Broad Beans are just about ready for harvesting. The yield will probably be OK but not outstanding. I'm not sure whether the "Stereo" pods will get any bigger than they already are - which is small. What I have read about them seems to indicate that the pods will not go above say four or five inches long, and will contain maybe 5 beans. 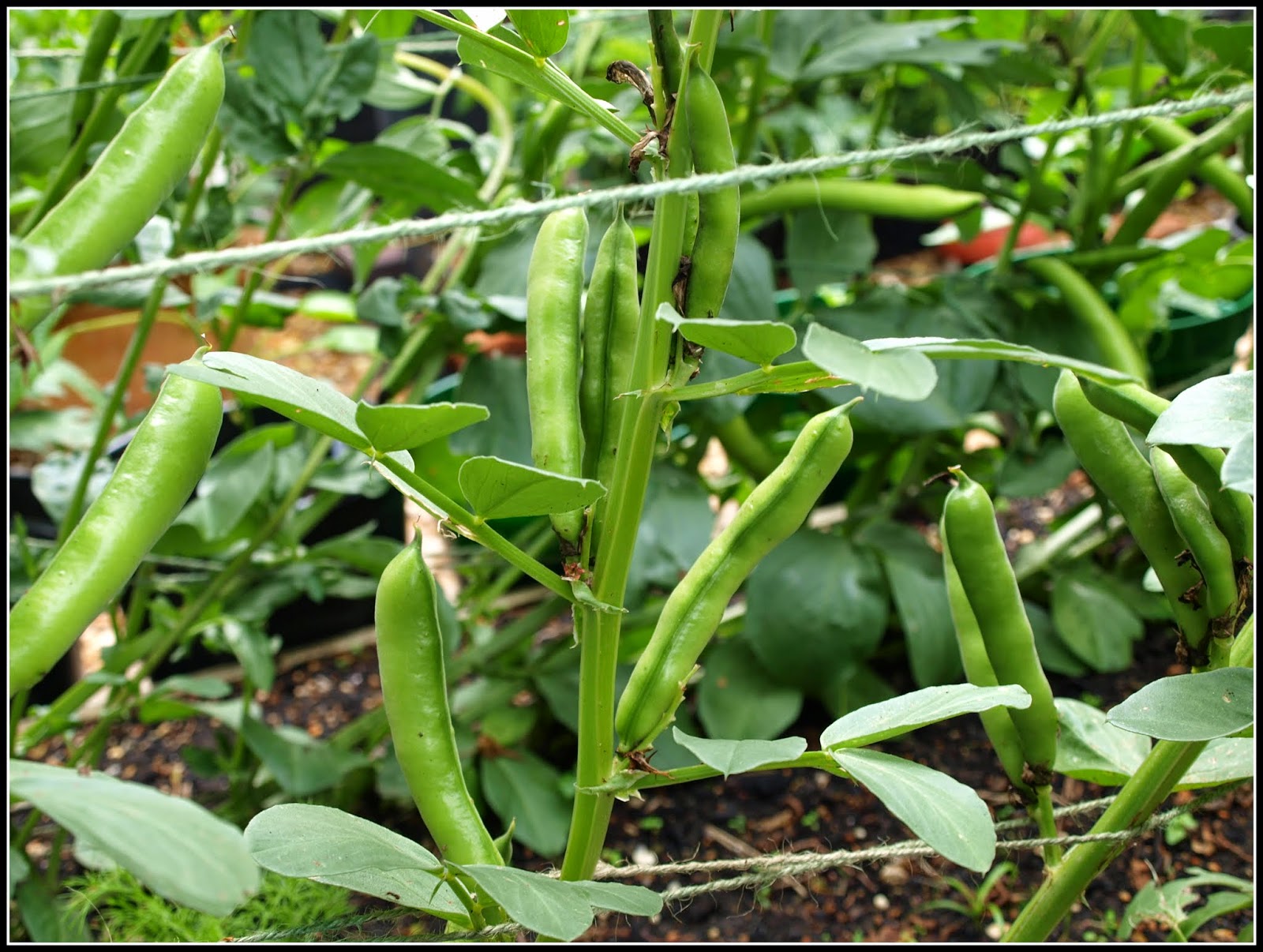 As they usually do, the Blackfly are wading into the tips of the bean plants with gusto: 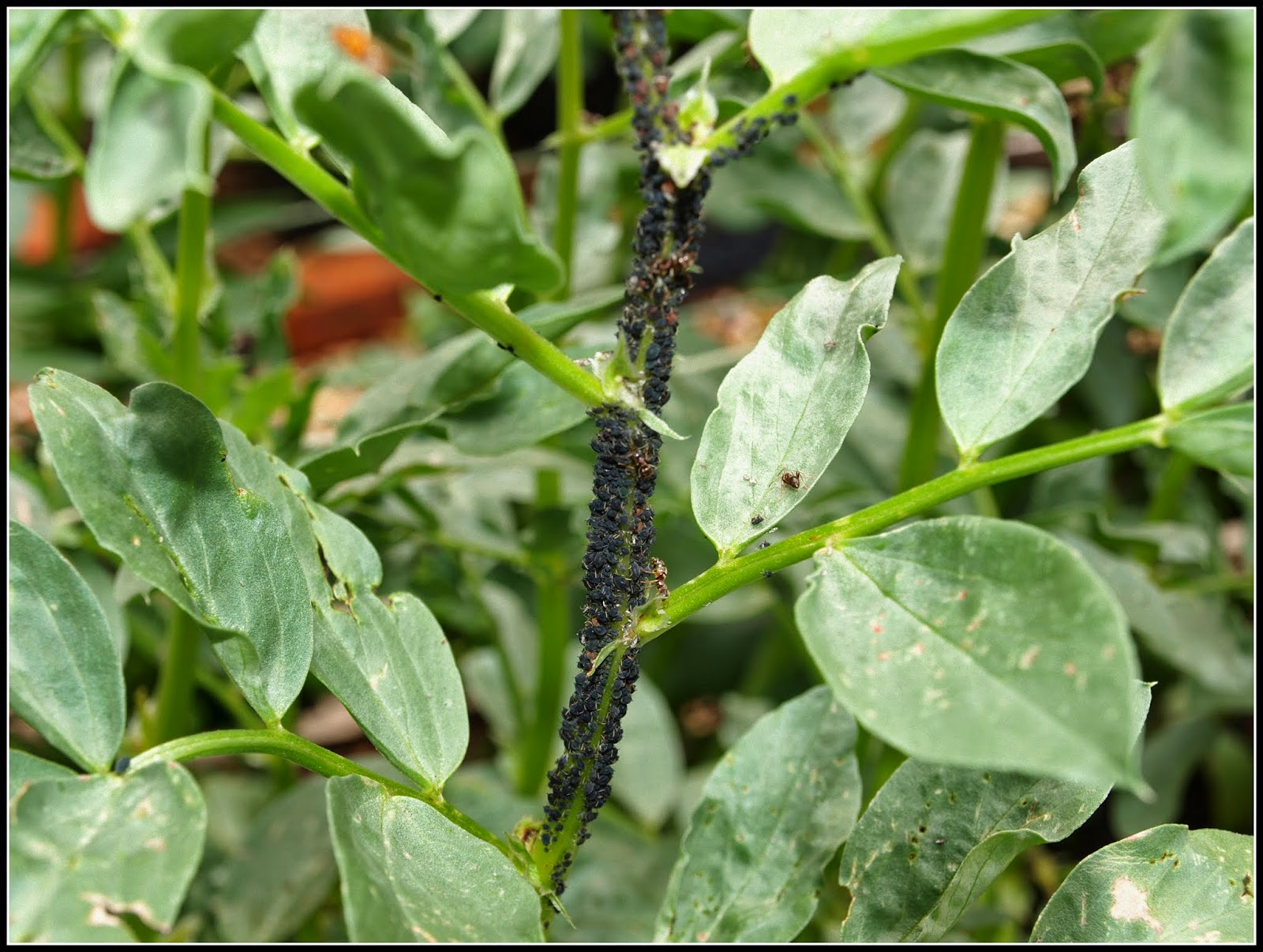 I'm not particularly fussed about this, because it doesn't affect the plants much at this stage of their developmment, and we don't eat the leaves so the Blackfly are welcome to them.

Some of my "Purple-top Milan" Turnips are nearly ready too. The biggest ones are about the size of a golf ball now. 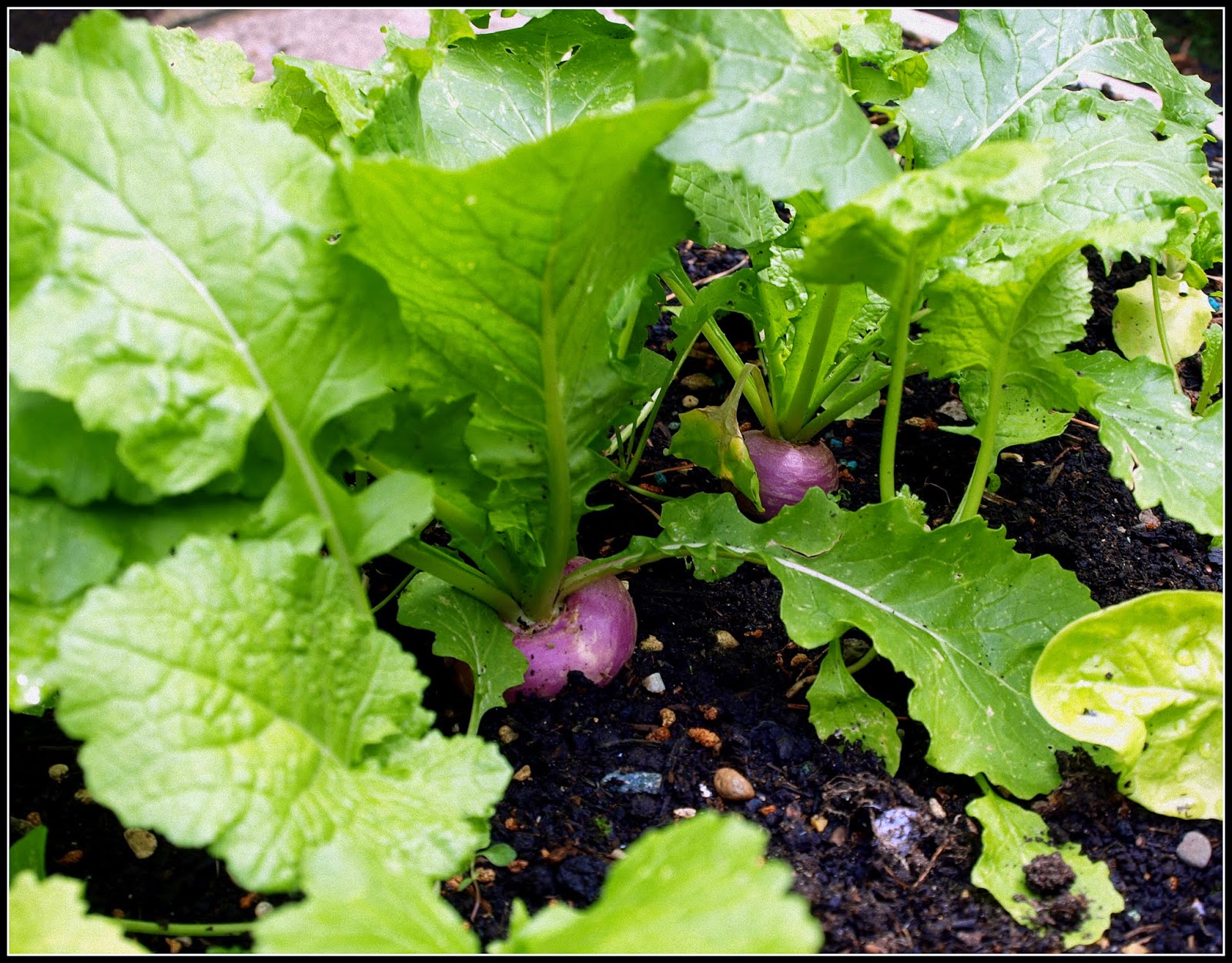 ﻿
I wasn't able to devote much space to Turnips, so we won't be eating many of them, but they do make a nice occasional treat. The "Golden Ball" ones which I sowed between the Carrots and Parsnips have disappeared from sight completely, swamped by the luxuriant vegetation of their neighbours, so I don't think they will bulb-up. They will probably just go long and thin in their frantic search for light.

It also won't be long before a couple of Sweet Peppers are ready. These first two set very early - before the infamous hailstorm - so they will mature well before any of the other peppers or chillis. 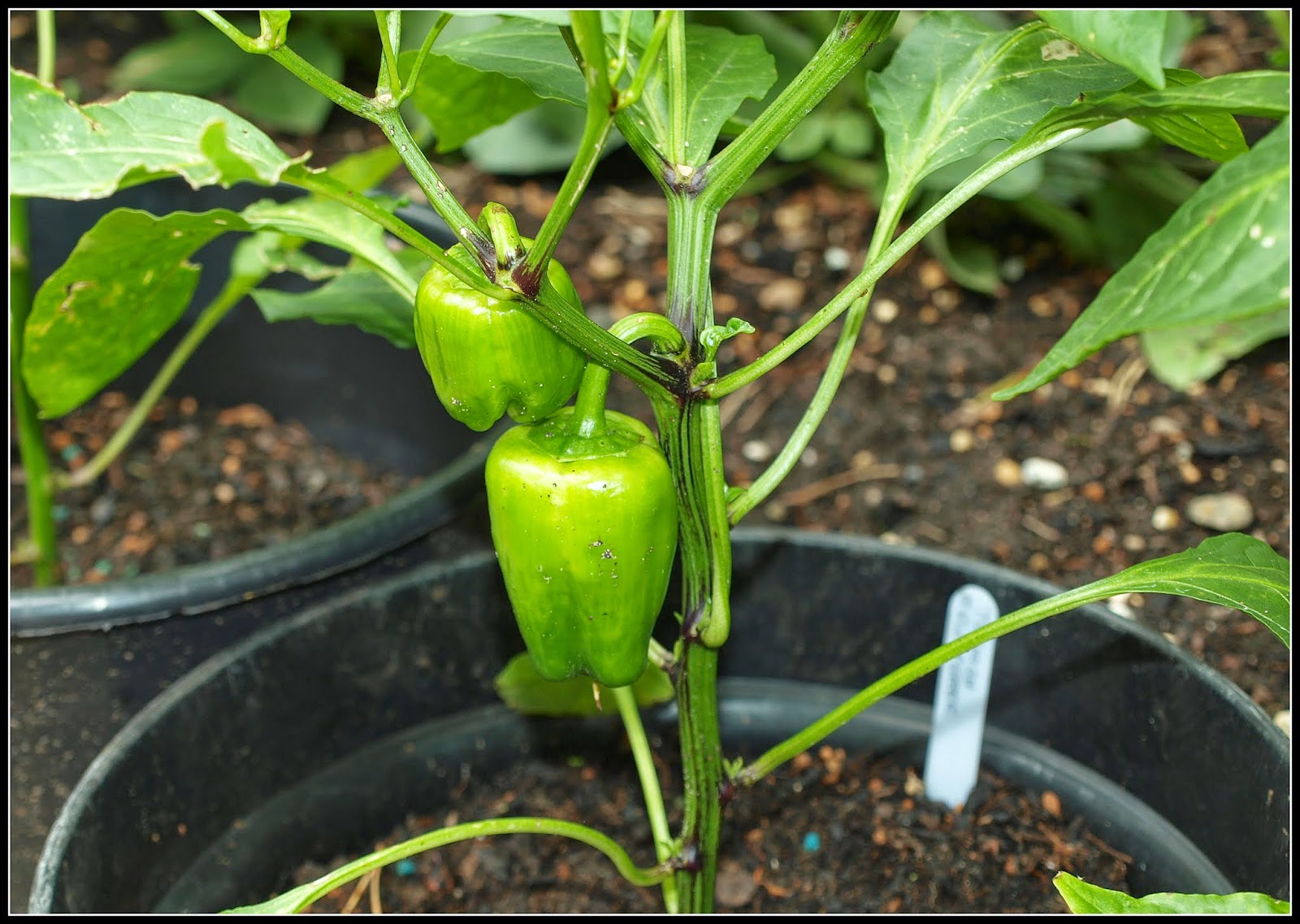 Fortunately the other chillis and peppers seem to be recovering quite well despite the considerable damage sustained by their leaves, so I should get some fruits, albeit later than would otherwise have been the case.


Finally for today, I leave you with a photo of this year's first bloom on my "Sunset Boulevard" Rose: 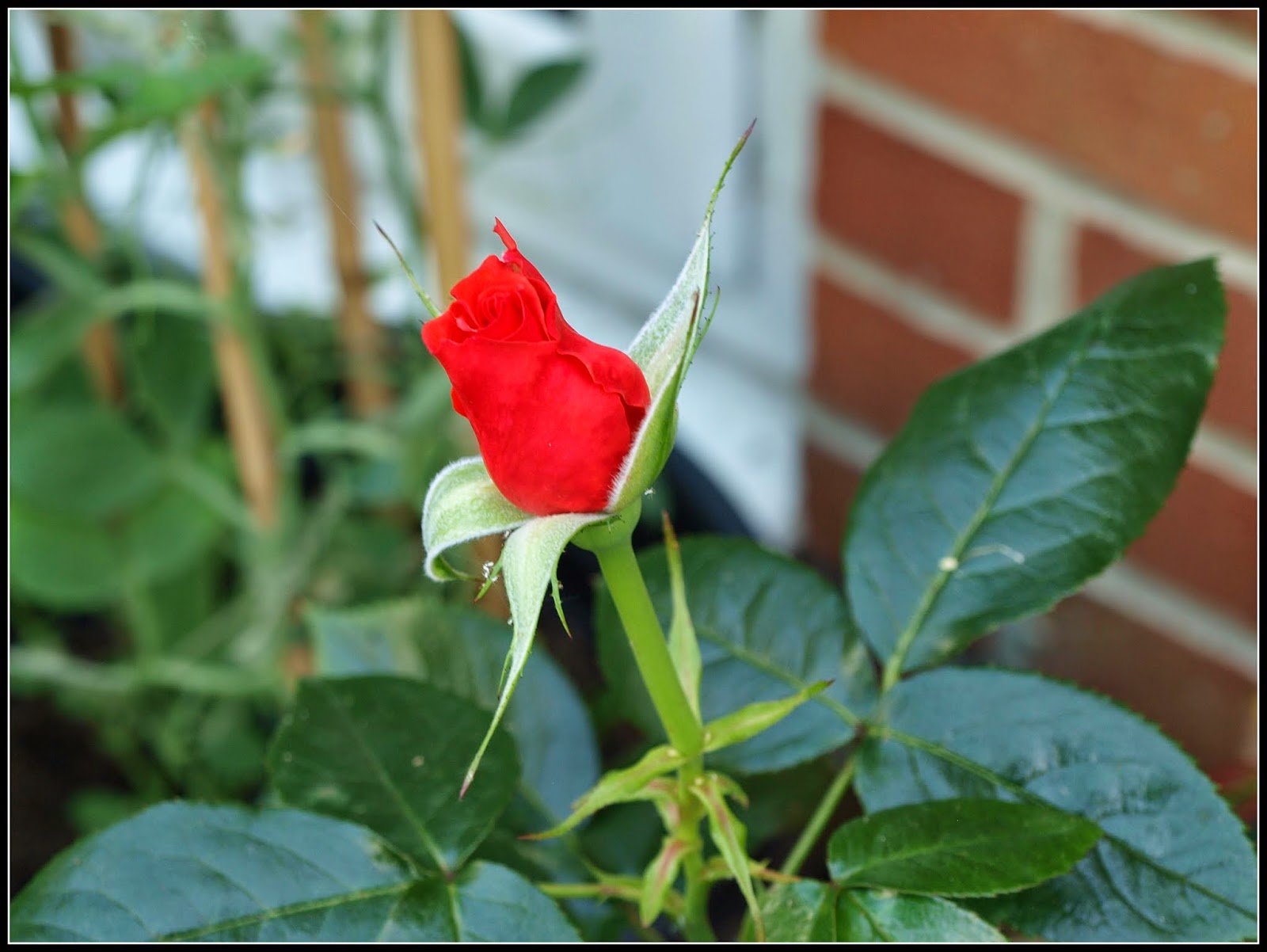 When in tight bud, as here, it looks red, but when the flower opens out it will be much more apricot-coloured inside.
Posted by Mark Willis at 12:00