My garden in the first week of June

Here we are nearly halfway through the year already! Today I am going to write generally about how things are progressing in my garden.

Firstly, the Runner Beans are beginning to climb. I often have to tie them to their canes with string to get them started, but this year it looks as if I won't need to do that: 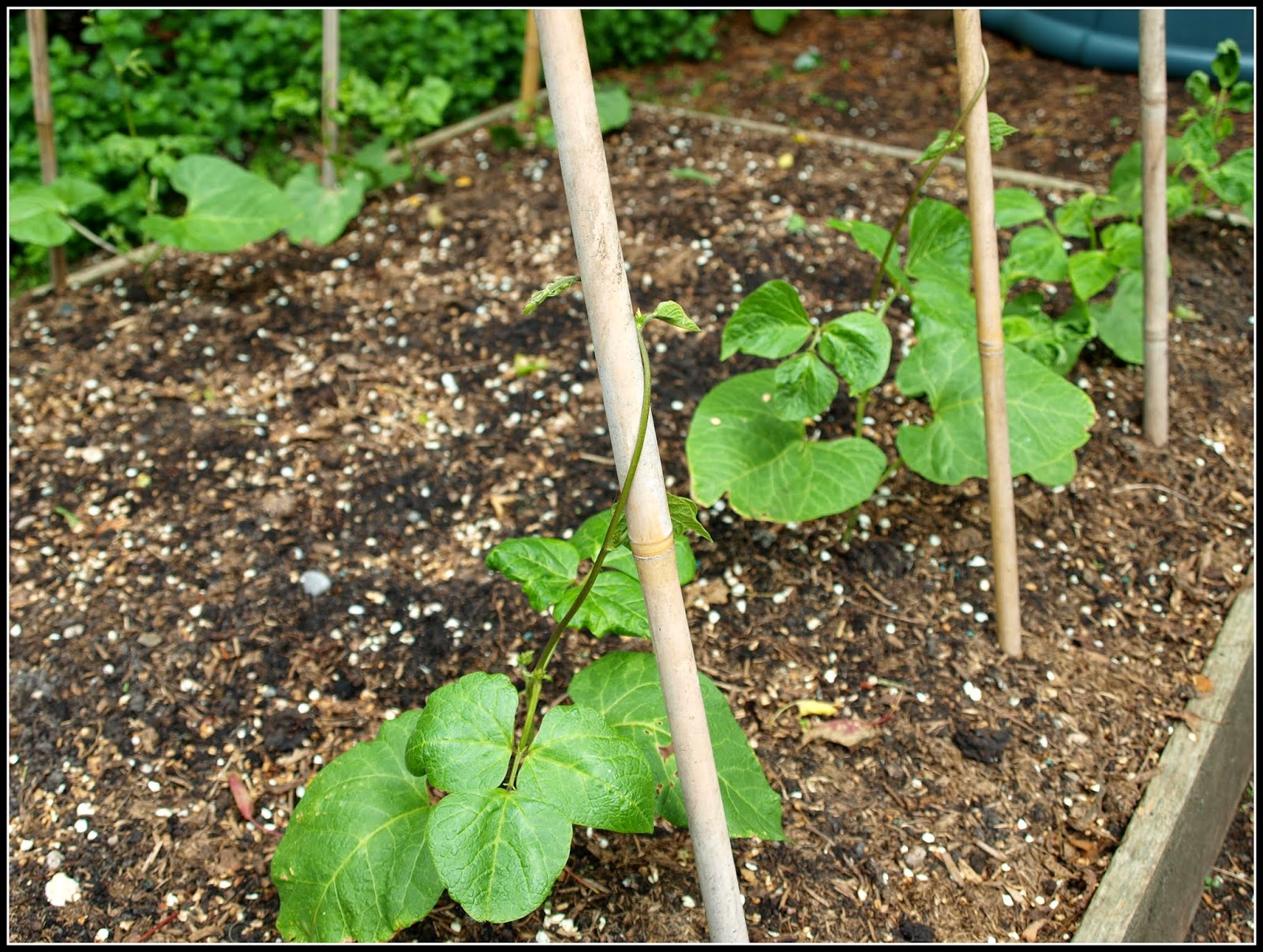 Nearby, the "Winter Veg" bed is rapidly filling up. The Leeks went in last week, and the two "Predzvest" cabbages have been joined by 5 more of different types. 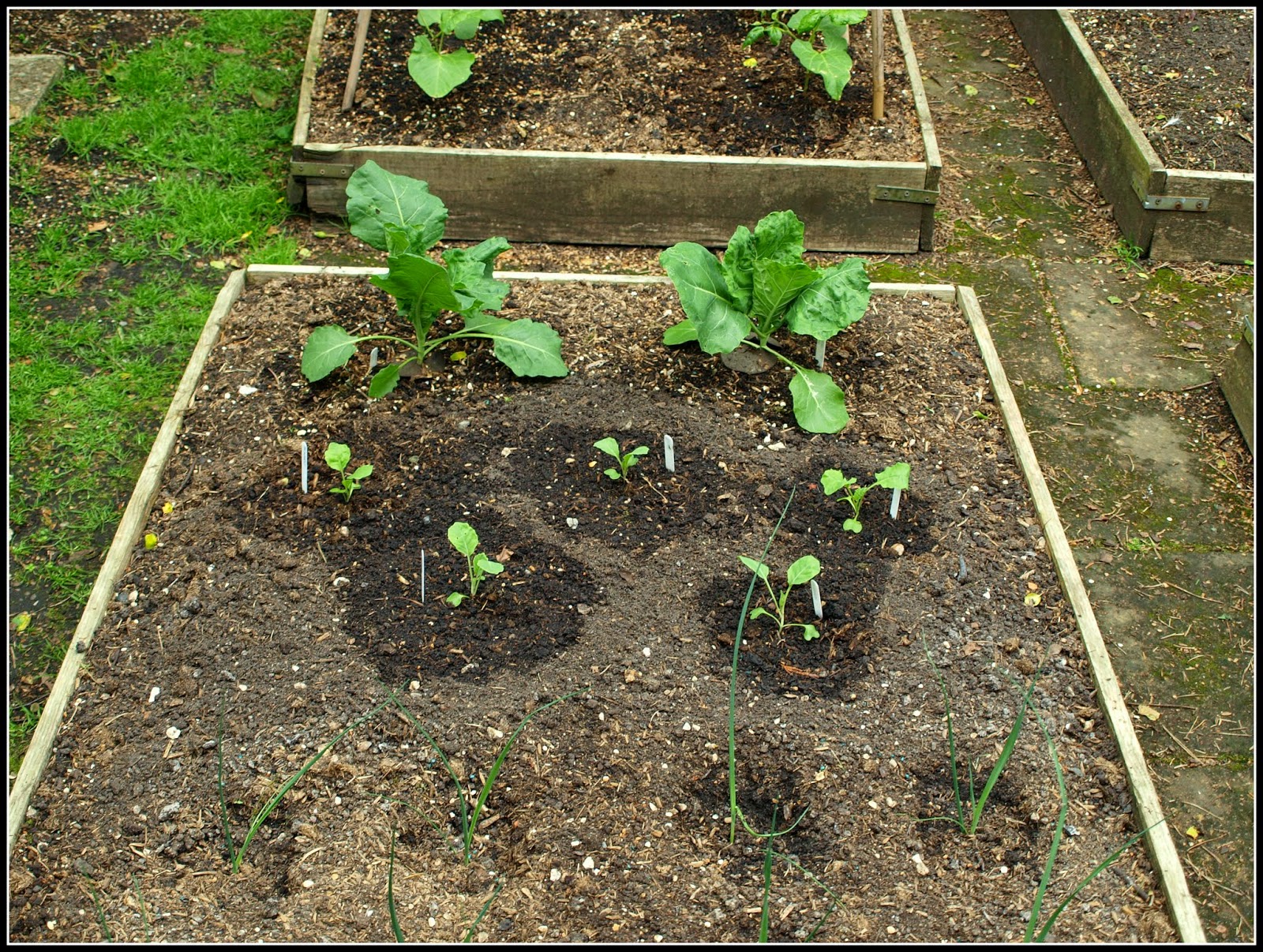 The last element will be the "Ruby" Swede Turnips, which will go in after the little patch of Radishes has finished.

The Lettuces have been fantastic. Some really nice specimens, and the successional sowing is working a treat. 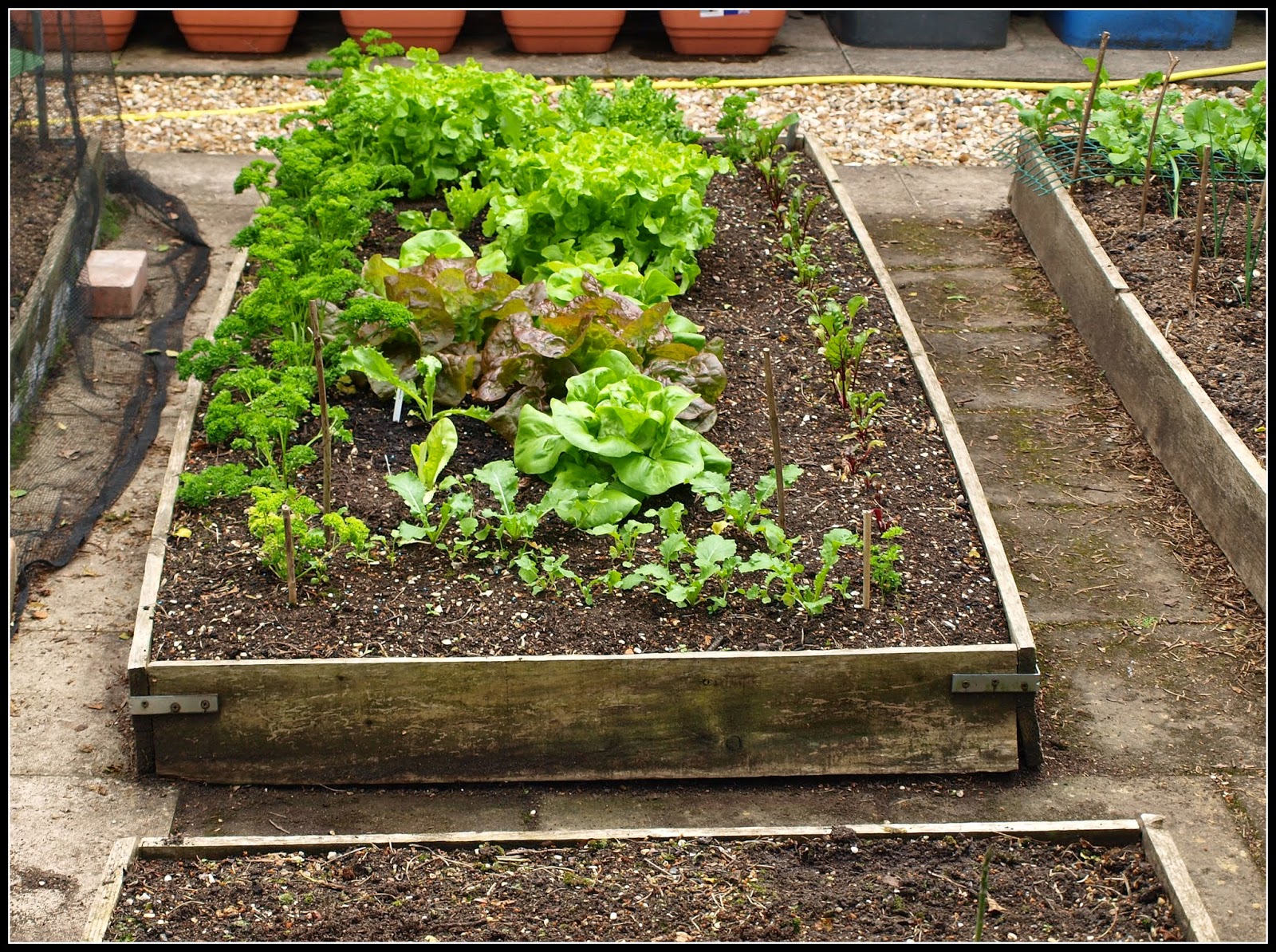 In the bed with the Lettuces are some Beetroot (a row down the right-hand side) and a few Turnips (foreground) - and of course the Parsley (the row down the left-hand side).

The Cucumber plants are gradually recovering, though still far from strong. 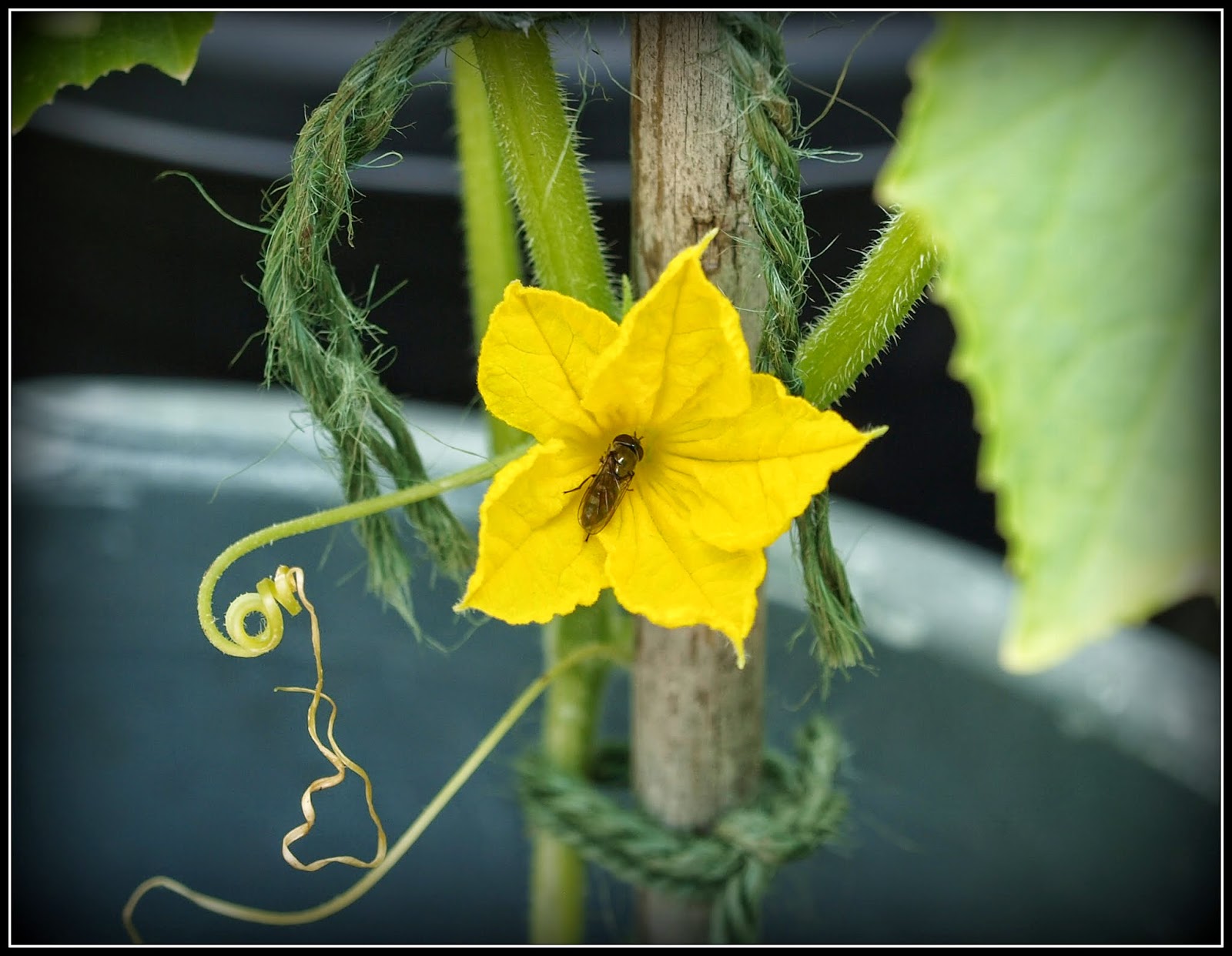 ﻿
The first flowers on the Tomatoes are showing colour now too - this one is "Maskotka": 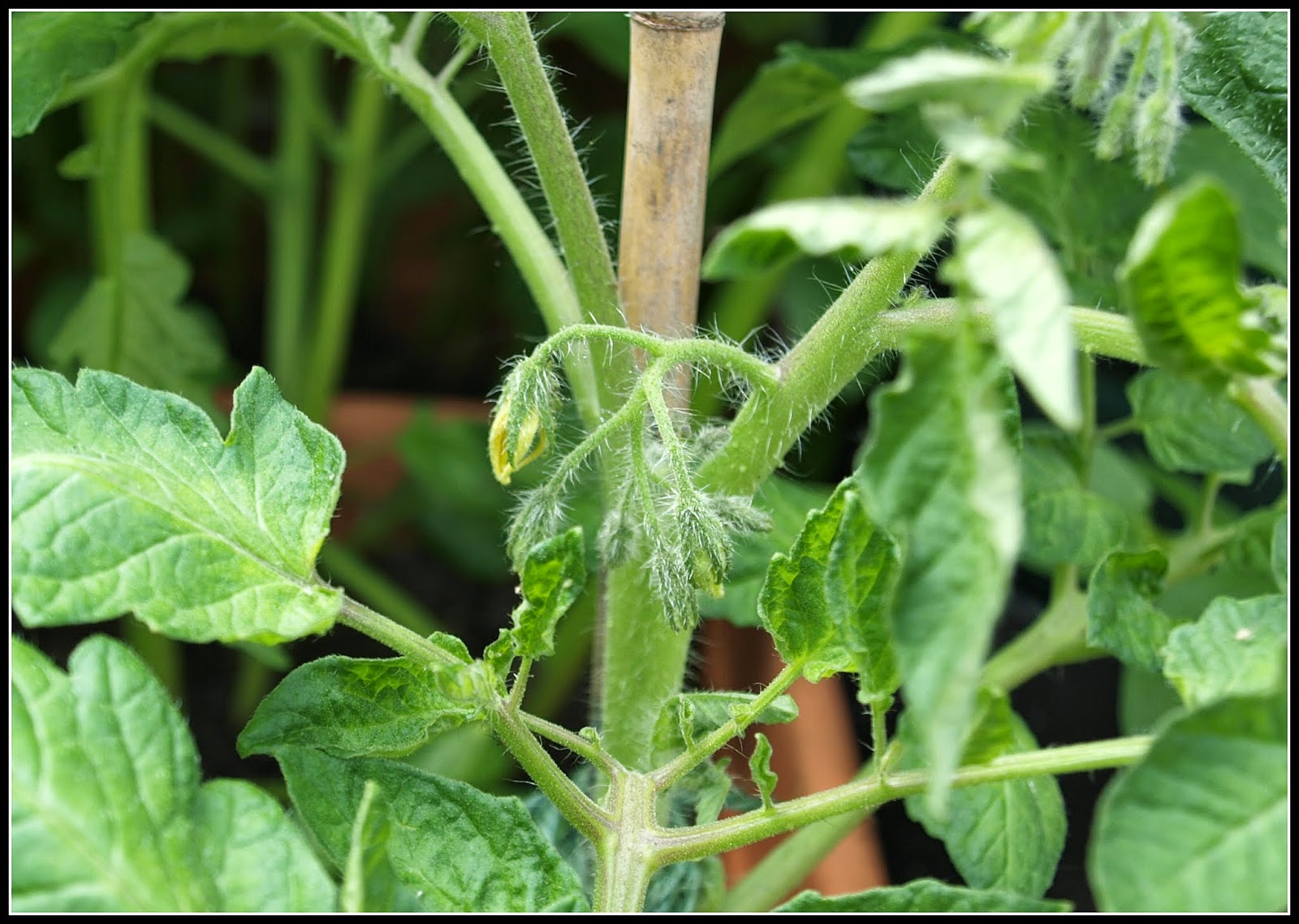 The tomatoes are all looking pretty good, and I am doing all the right things to them - pinching out the sideshoots of the cordon varieties; tying the plants to the canes as they get taller etc, and I have started applying "Tomorite" liquid feed as well. 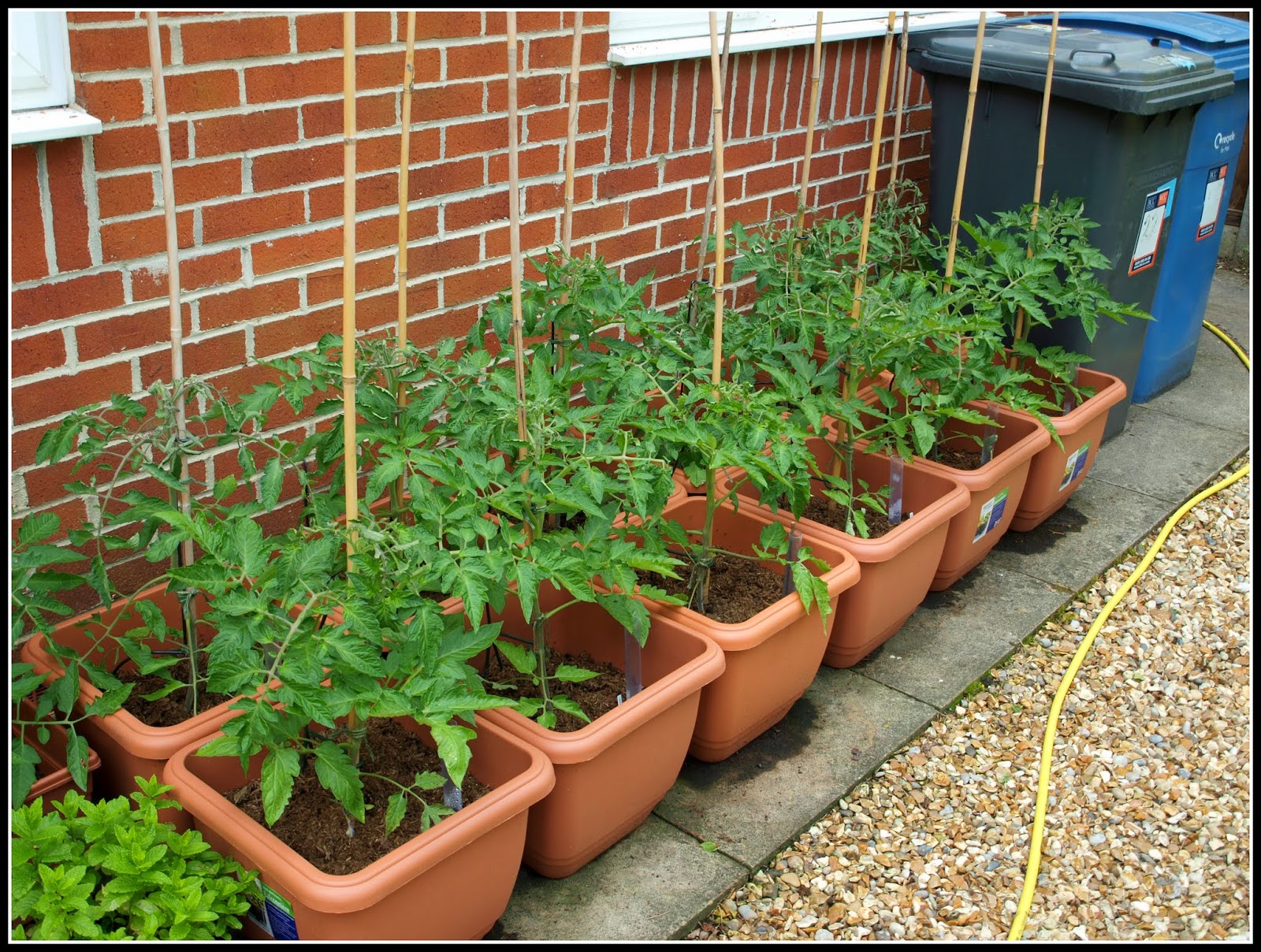 The Asparagus is continuing to provide a steady trickle of spears to augment the shop-bought ones that are everywhere now. I'll have to stop cutting them soon. 21st June is the official end of the Asparagus season here. After that time you are supposed to let the spears develop into fern, so that the plants can build up their energy for next year. 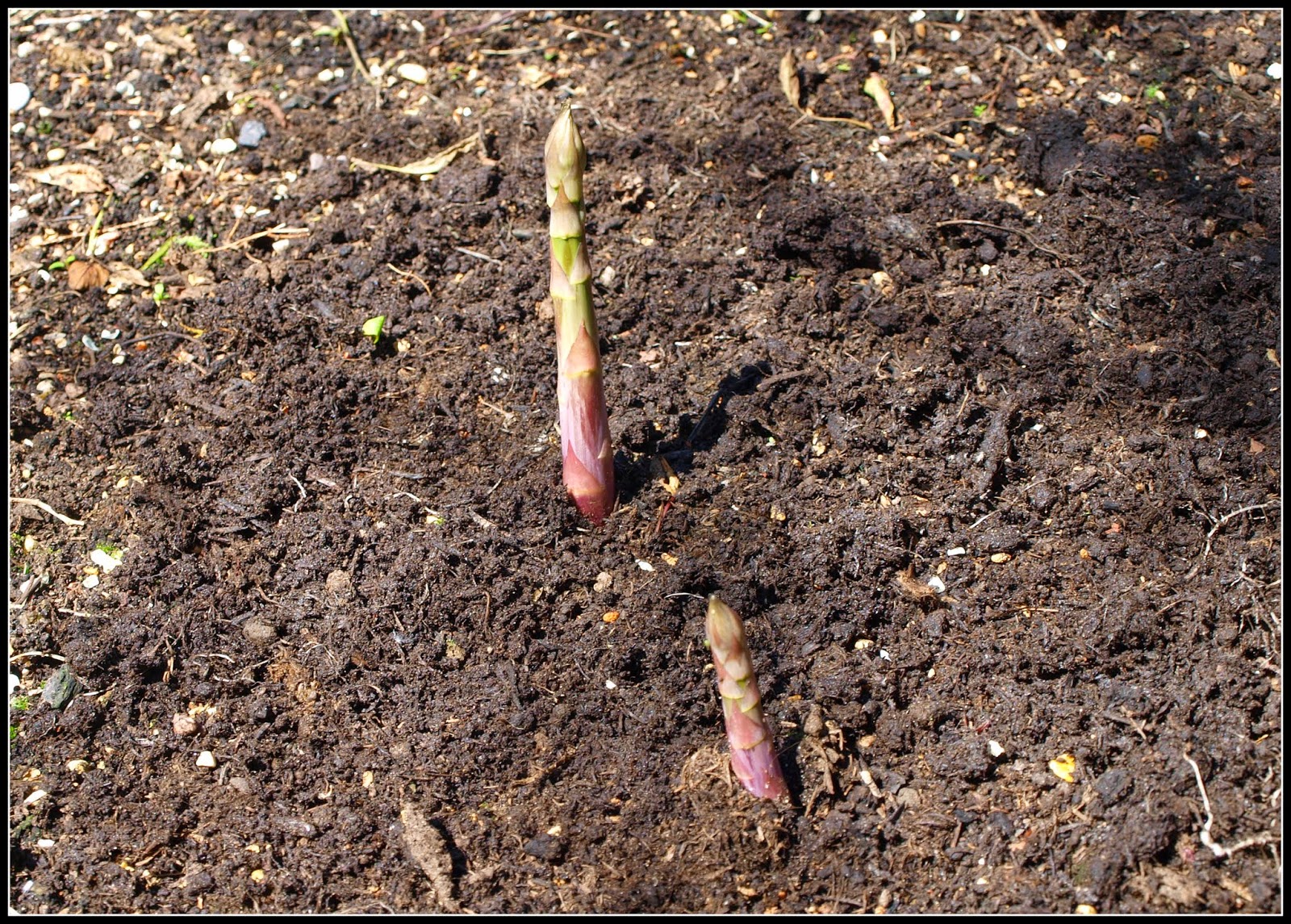 Even the Rhubarb has decided to put up some more leaves - prompted no doubt by the copious amount of rain that has fallen in the last couple of weeks. 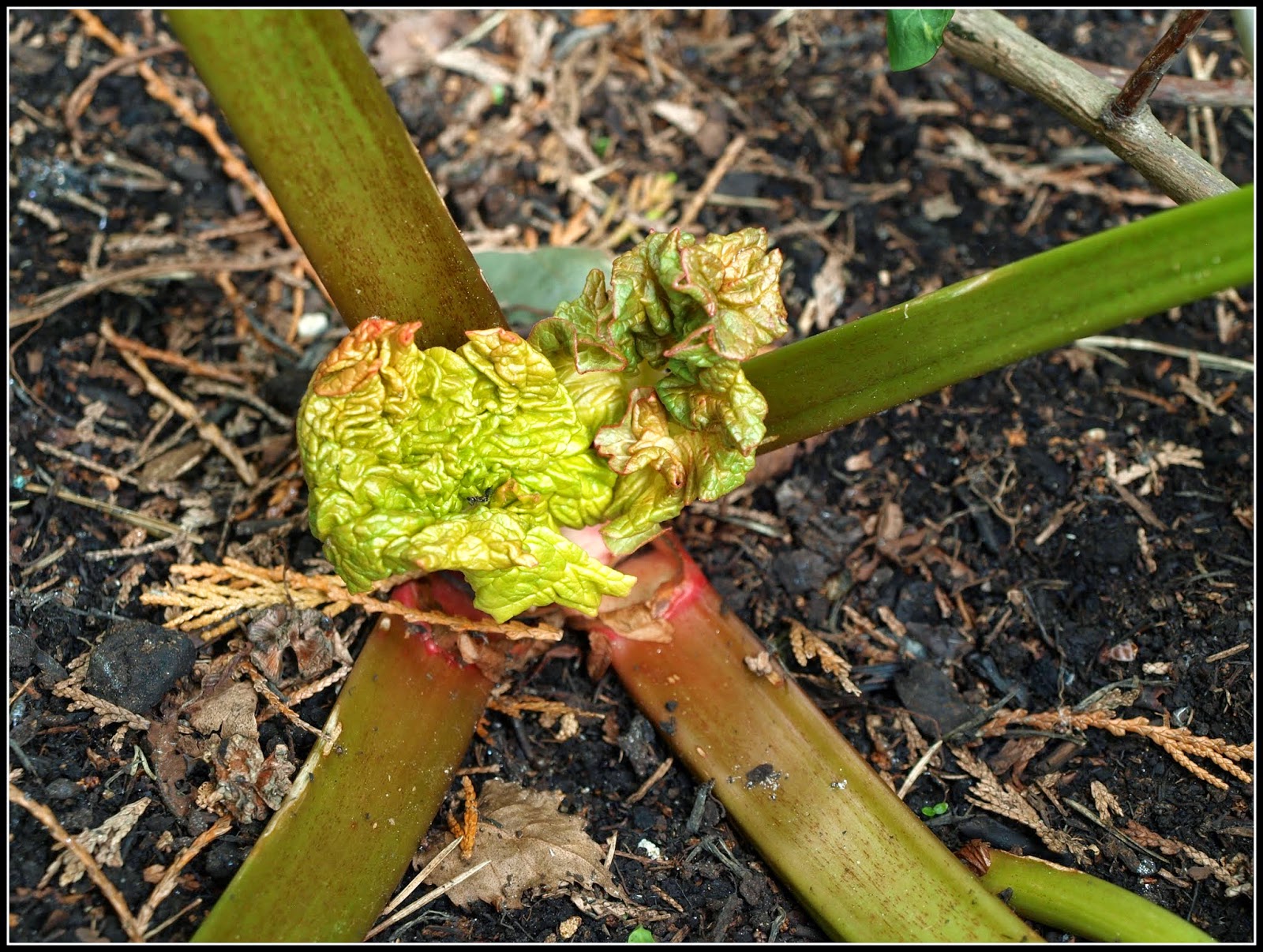 ﻿
I have not picked any Rhubarb this year. My three plants are not very big, and I decided to let them develop undisturbed this year. I think I will move them at the end of the season too, since they are not doing as well as I would like in their present site.

The Broad Beans are still a long way from ready. A fair few pods are setting, but I think the plants need more sunshine! 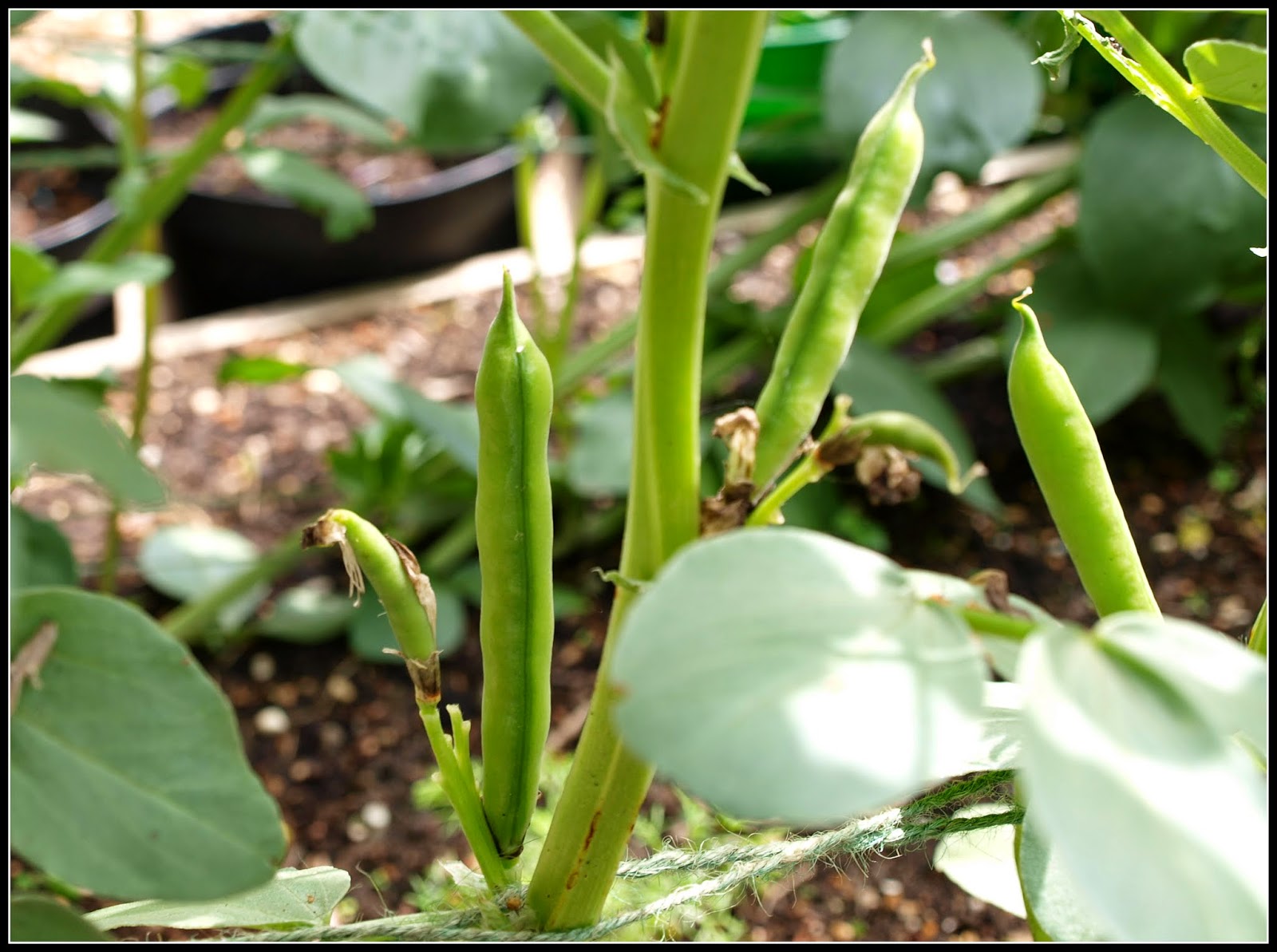 They got blown about a bit in the gales we had a few weeks back, but they soon righted themselves. I have supported them with three lines of string so far, and they may eventually need four. 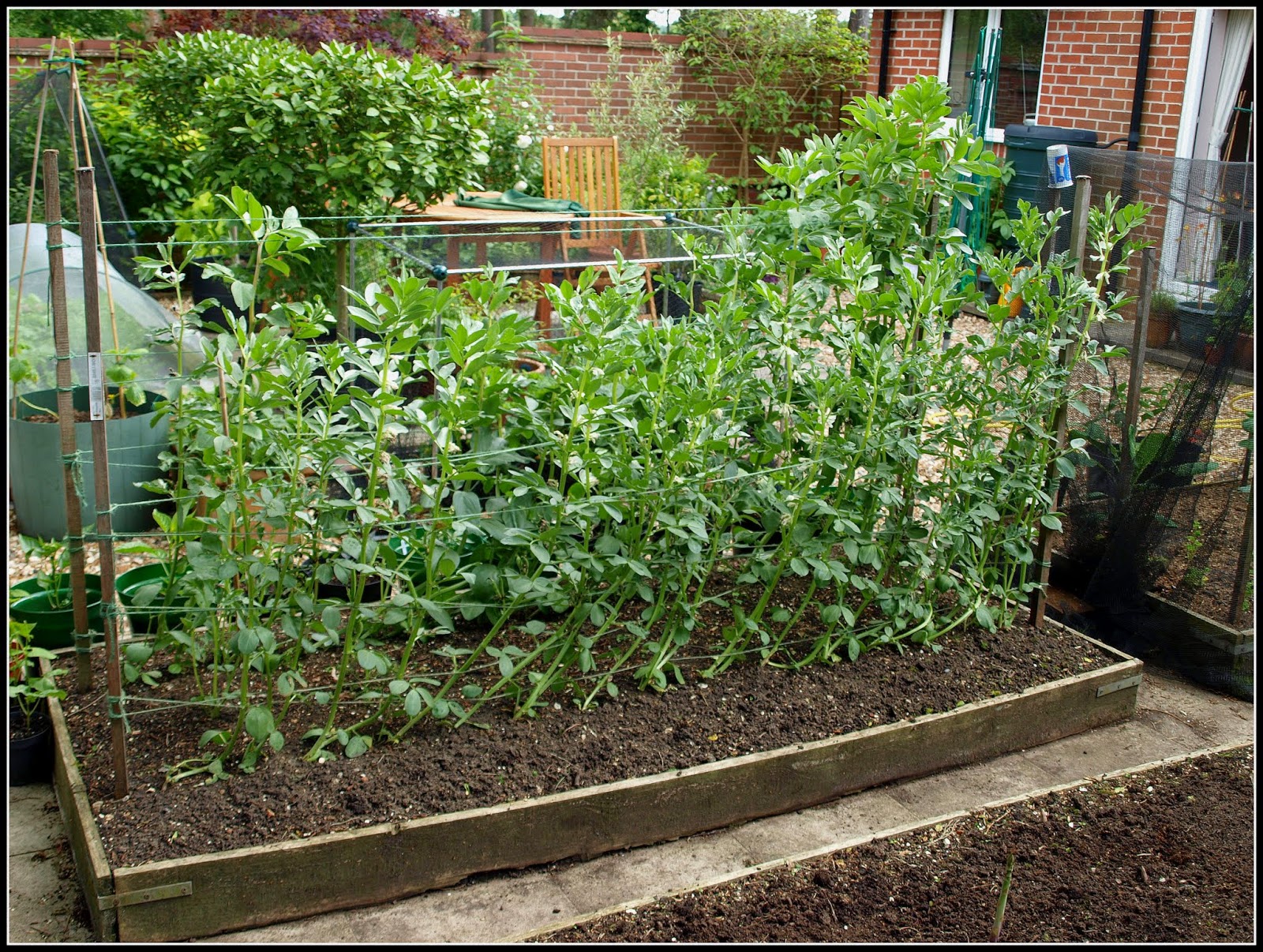 The potatoes actually like wet weather. They have made a lot of foliage. Hopefully not at the expense of tubers though. 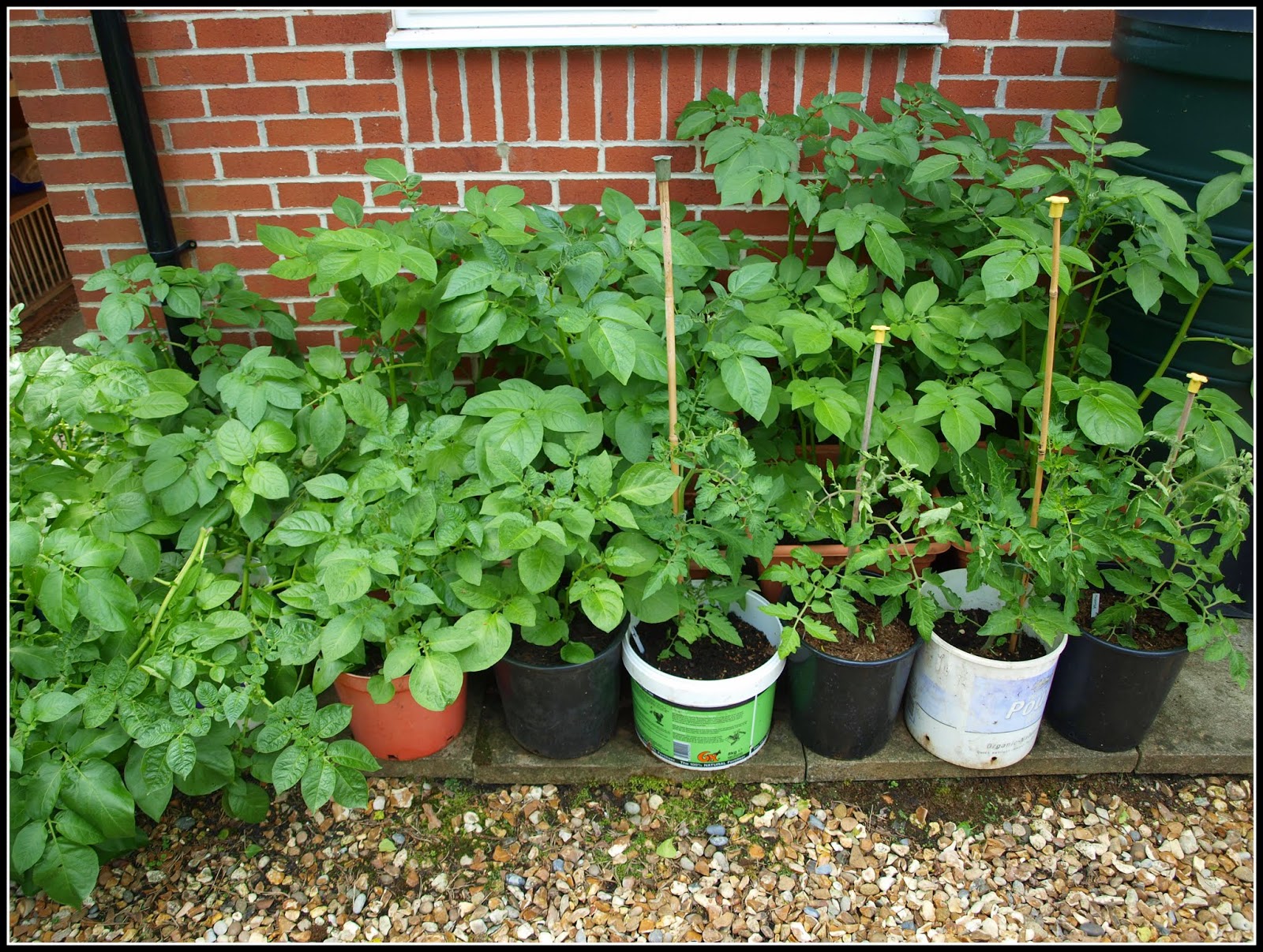 I expect to be harvesting the first potatoes very soon - a much-anticipated treat!﻿

The Parsnips and Carrots in the big Woodblocx raised bed are putting on weight too. Here you can see Parsnips on the left and Carrots on the right, and if you look very carefully you might just make out a line of tiny Turnips down the middle: 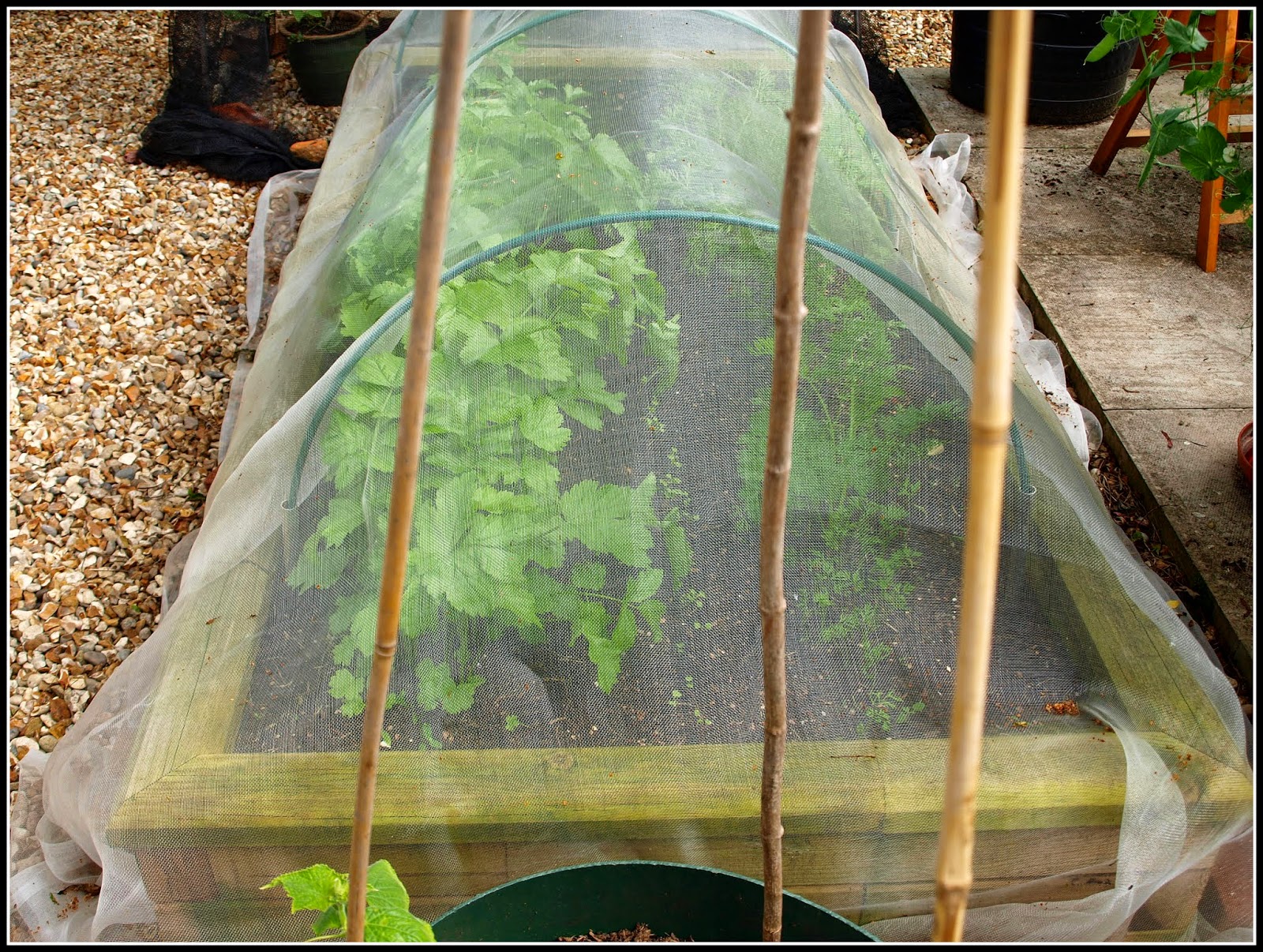 I don't know whether the Turnips will manage to get enough light to grow properly. I sowed them after harvesting the Radishes that preceded them in that space, which did very well, but that was when the Parsnips and Carrots were only an inch or so tall. Still, Turnips do grow pretty rapidly, so maybe they'll do OK.

Finally for today, a token flower. The white rose-bush is covered in blooms now, and very few aphids, so I reckon that's a good result! 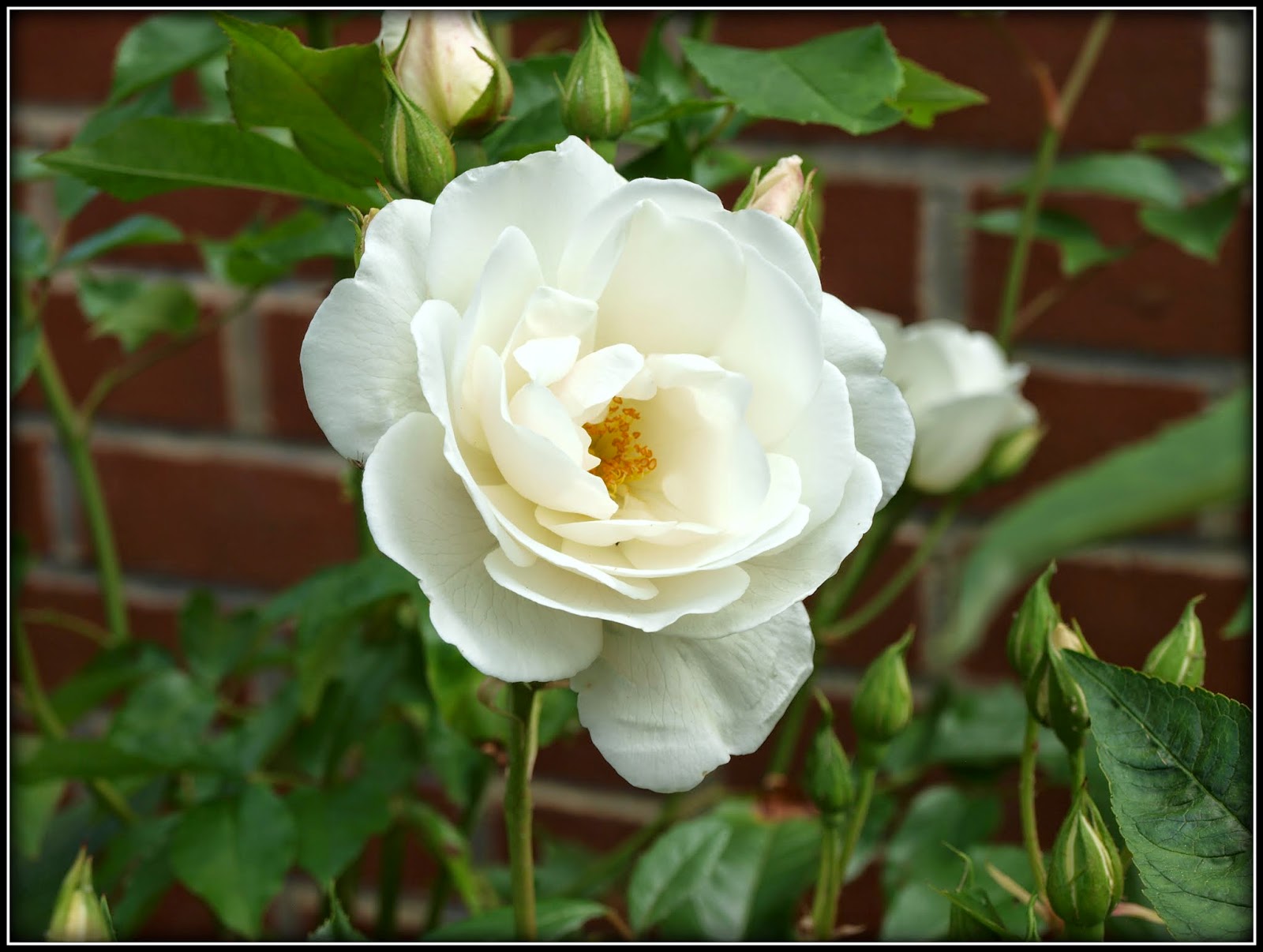