My lettuces this year have been amazing - and no-one is more surprised about this than me... How come they have been so good? Have I done anything special to them this year that I don't normally do? Is it just because of the weather? 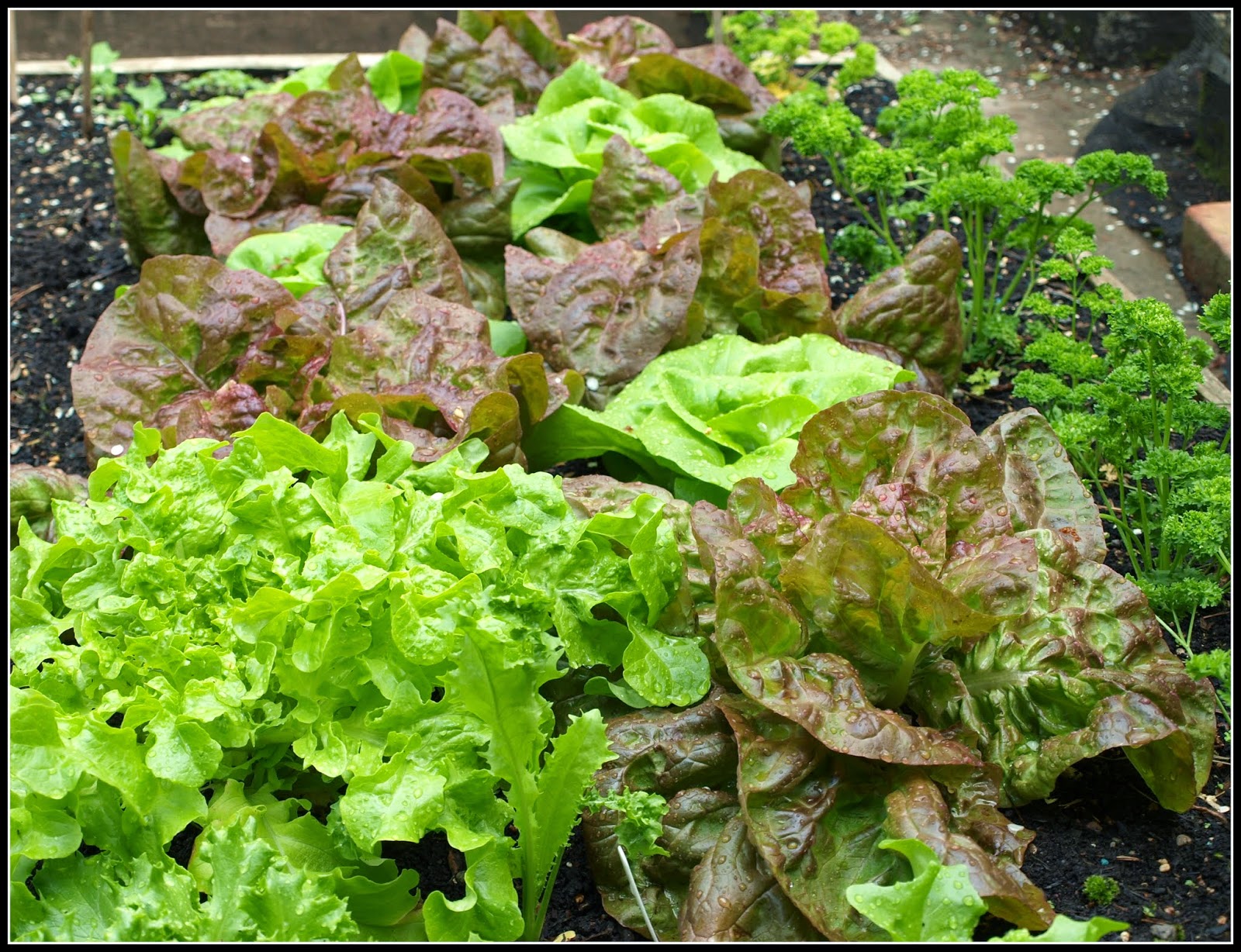 Well, I think it is probably a combination of factors, but in my opinion the main factor is that I boosted the raised bed in which they are growing with some "special" compost - some of that composted stable manure that I bought from The Compost Centre in nearby Woking. It seems to have given my garden a real boost, which is exactly what I had hoped it would do. I can't recommend the stuff highly enough (especially in the light of the trouble I have had this year with various types of big-name composts bought from my local Garden Centre).

This very handsome lettuce is "Cervanek" (courtesy of Dominika in the Czech Republic). It is very similar to "Marvel of Four Seasons" which I have also been growing, except that the colours are more intense.
﻿
﻿This is "Devin", from the same source. A really excellent "Butterhead" variety, with bright yellow inner leaves.

This is what "Devin" looks like when the outer leaves are removed after harvest. This type of lettuce is sometimes known as "Round Lettuce"... 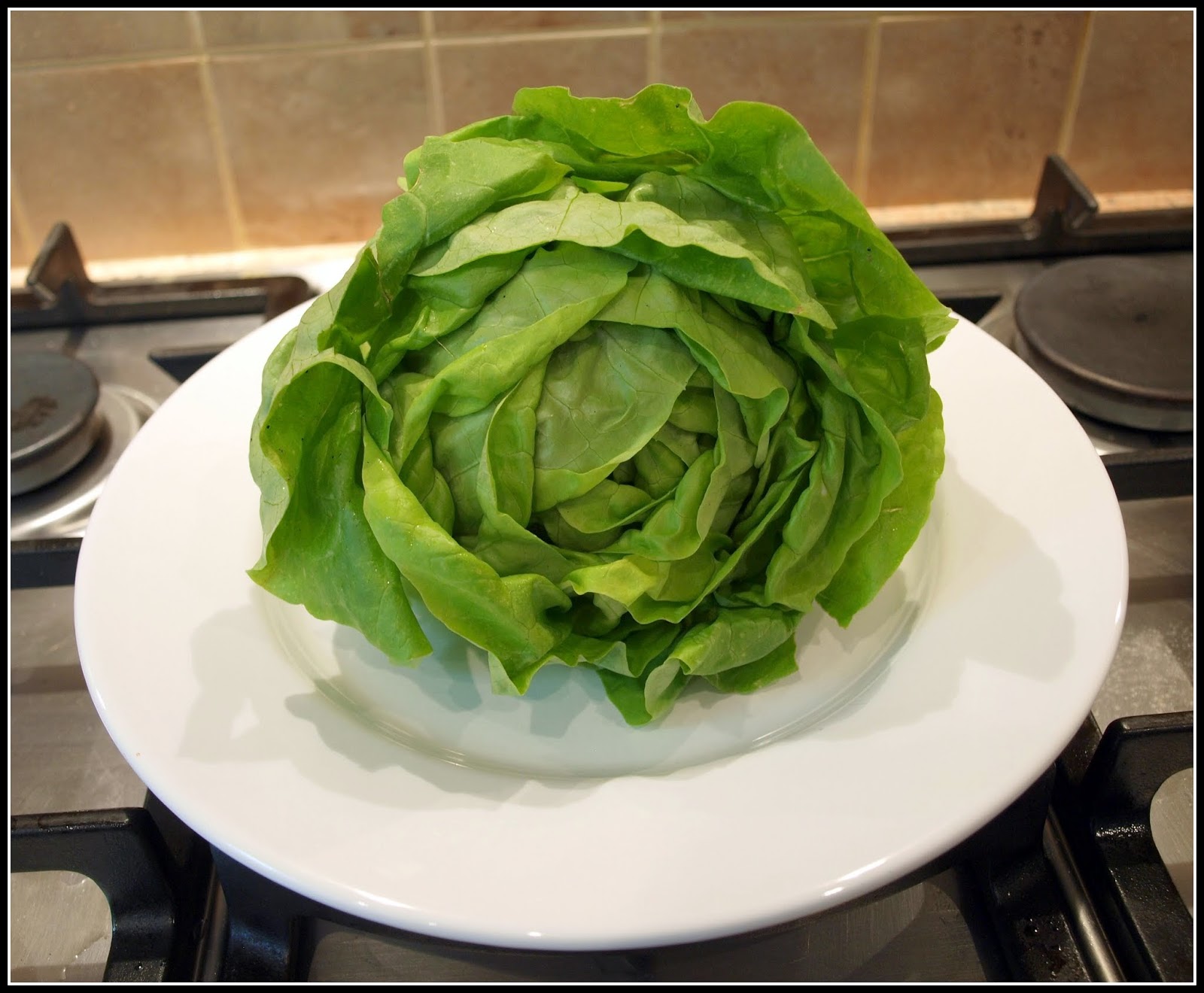 And this is what it looks like on the inside: 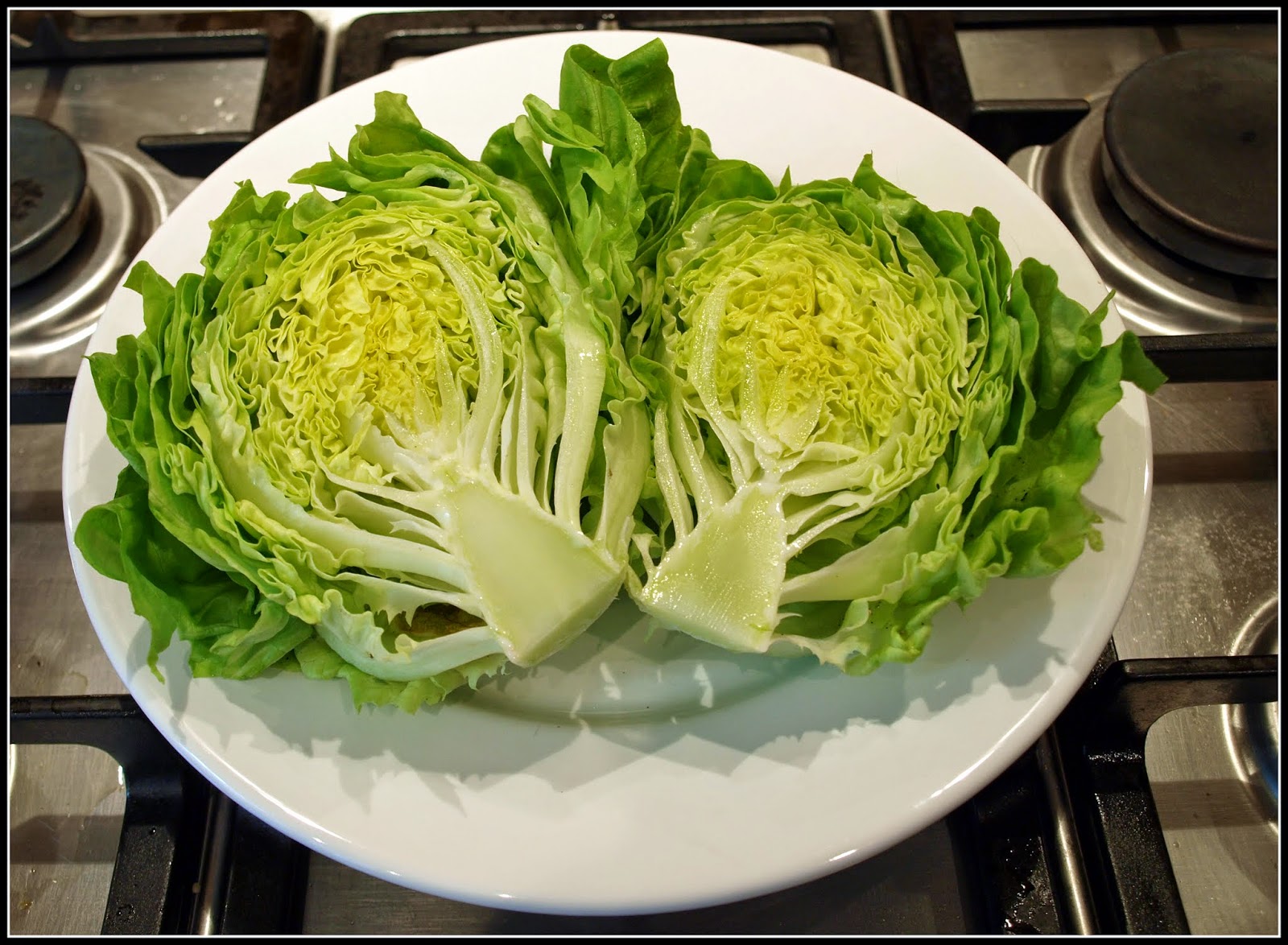 You can see why this type of lettuce is known as the "Butterhead", can't you? 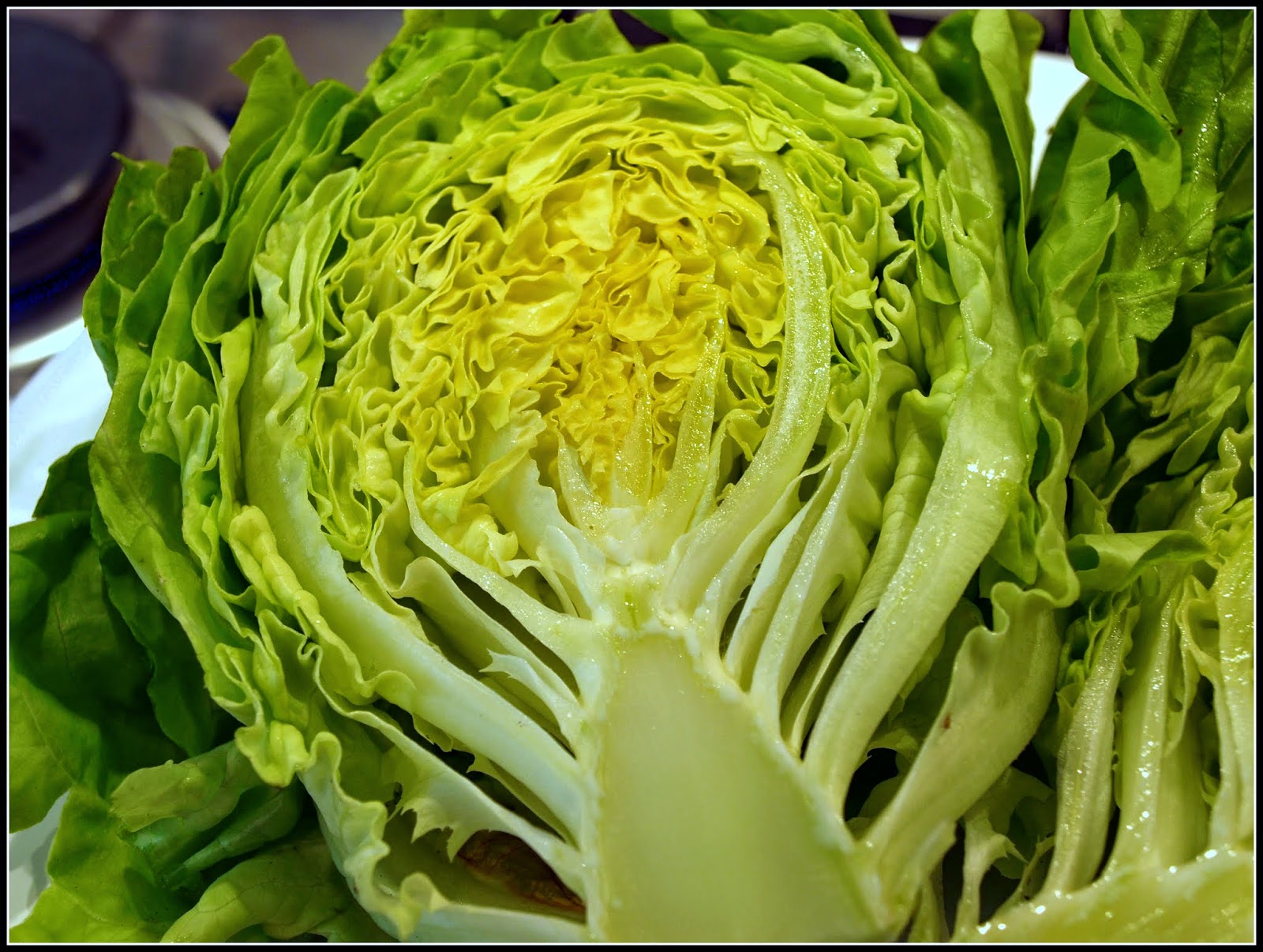 This next one is "Can-Can", one of the three varieties from the Sarah Raven Best Winter Lettuces pack. I don't yet know how it performs in the Winter, but it certainly seems to do OK in the Summer! It has an appearance very similar to many types of Curly Endive, but with none of the Endive's bitterness that some people dislike.

And then there is this absolutely gigantic "Green Oak Leaf" lettuce!

I have posed it next to my green rubber Trug-tub, which often features in my photos, just to give you an impression of its size. Although this variety of lettuce is often advocated as a "cut-and-come-again" type, it is very densely packed and eminently suitable for picking whole.

﻿
I have been very good with my successional sowing regime too. I have sowed lettuce on four occasions so far, and have quickly replaced the ones harvested with new little seedlings so that there is no gap in production. 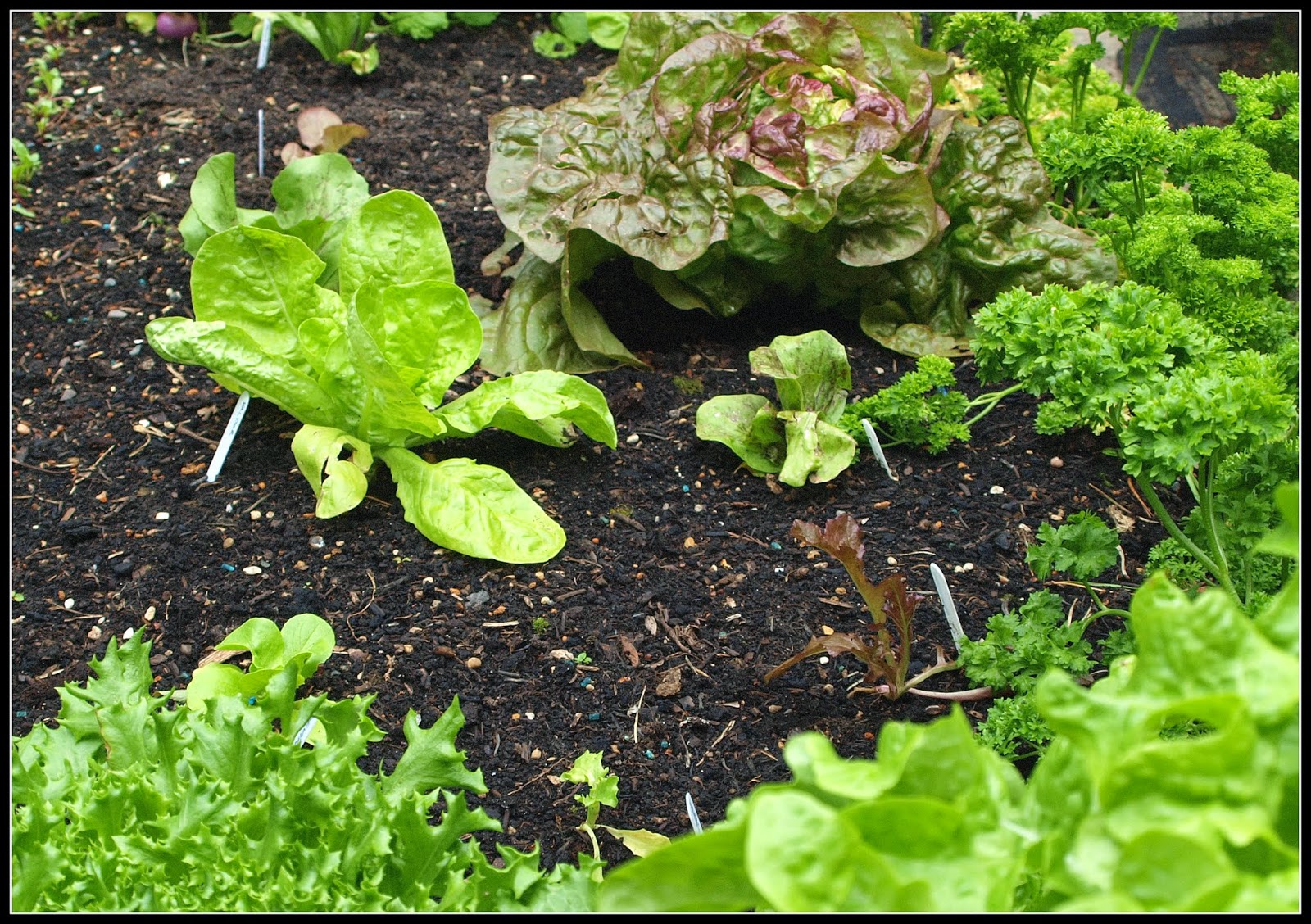 Let me finish with a piece of advice: If I were you I would not use old seed for growing lettuce. I have found this year that brand-new seeds have performed hugely better than old ones. I had several part-packs of lettuce seed from previous years, and I have sown a lot of seeds from them, but not only were the germination rates very poor, but also the plants from those that did germinate have been noticeably weaker and none of them have done well. Significantly I have not shown you in this post any of the "Webbs Wonderful", "All Year Round" or "Delicato" varieties - of which I have managed to produce only one or two rather weedy specimens!
Posted by Mark Willis at 12:00