The Golborne garden in November

This last weekend Jane and I spent a couple of days with her Mother in Golborne, near Warrington. Some of you may remember that I did a bit of tidying-up in her garden a few months ago, so I thought maybe it would be appropriate to show you some more recent photos...

Although the garden is understandably neglected these days, it does contain some good plants. With a few days worth of hard graft it could be restored to respectable condition. If you look closely, there is still a fair bit of colour in the garden too. For instance, this dramatic Cotoneaster bush usefully hides a fair chunk of the uncompromisingly ghastly pebble-dashed concrete garage... 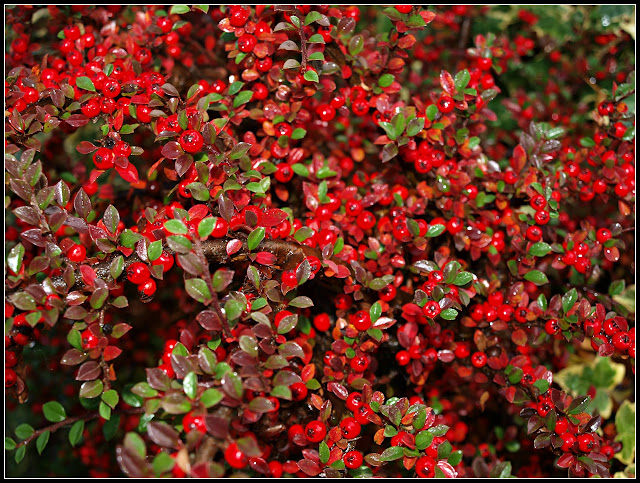 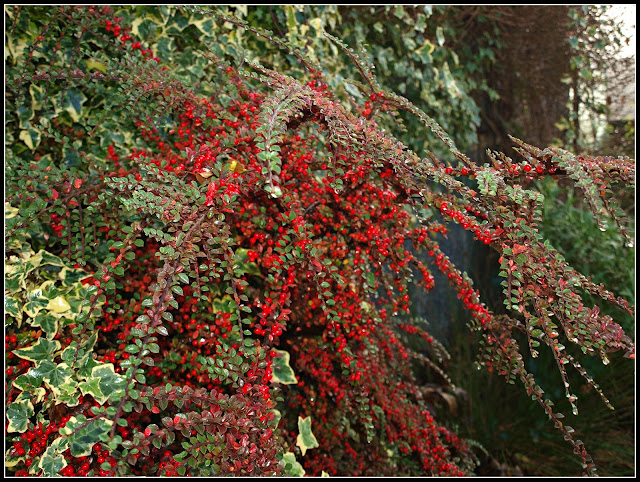 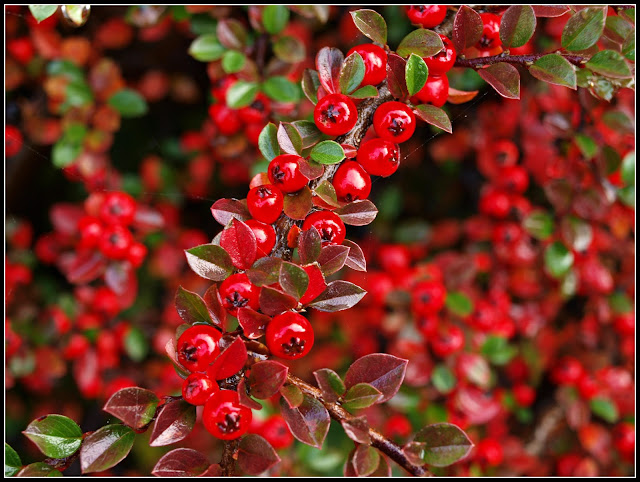 At the corner of the garage there is a spectacular Fuchsia shrub, with golden-coloured foliage and pink flowers: 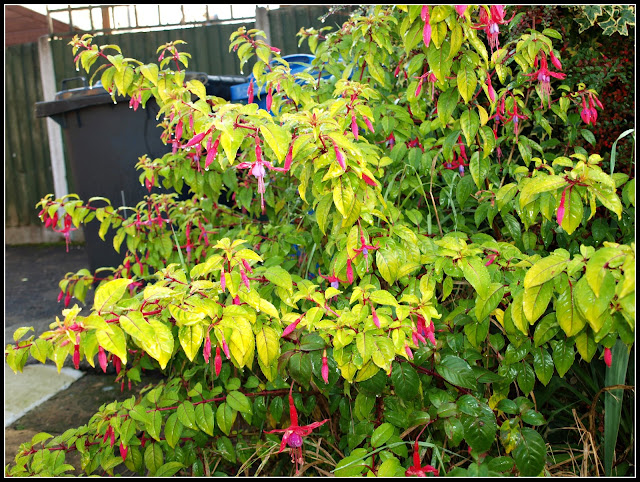 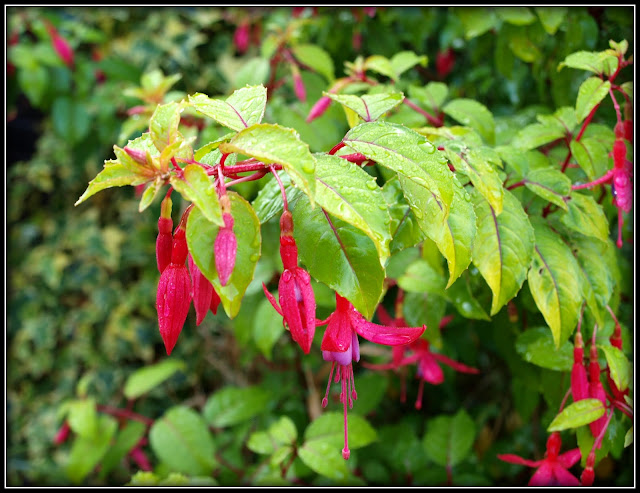 Another part of the garage is smothered in this very attractive two-tone Ivy. 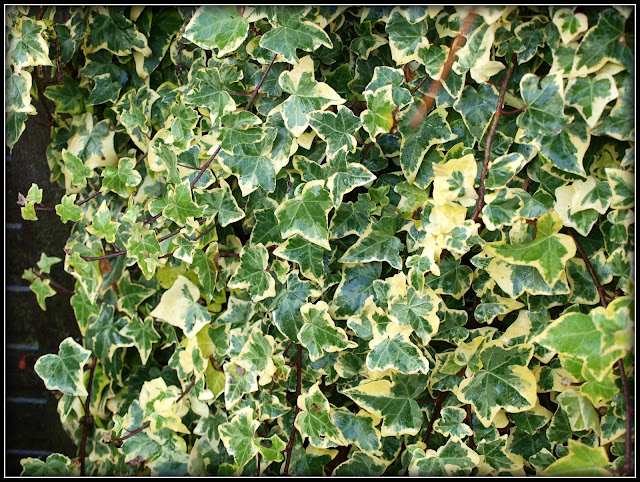 In various parts of the garden there are several different types of Fuchsia: 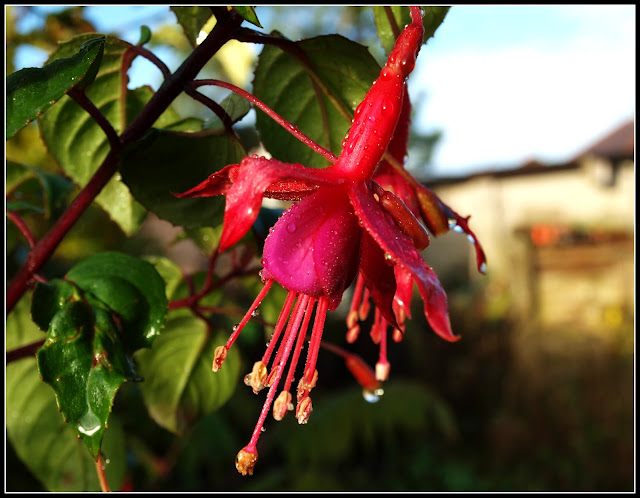 Most of my photos show plants with raindrops on them, because they were taken early in the day after heavy overnight rain. 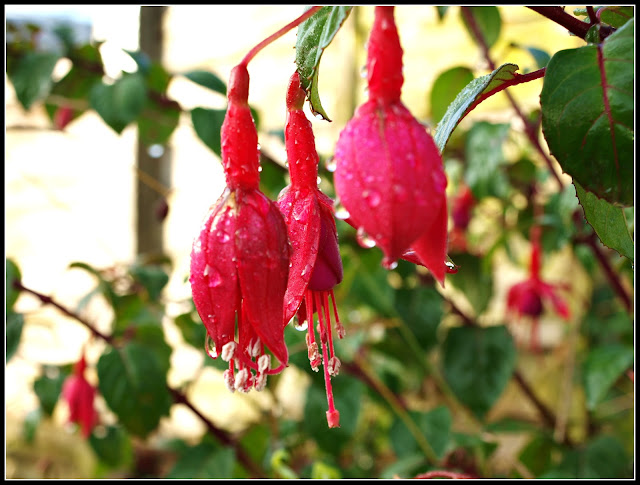 There is a general pink theme in the garden at present. The leaves of this rather bedraggled Hydrangea plant are green in summer, but just look at their rosy colour now... 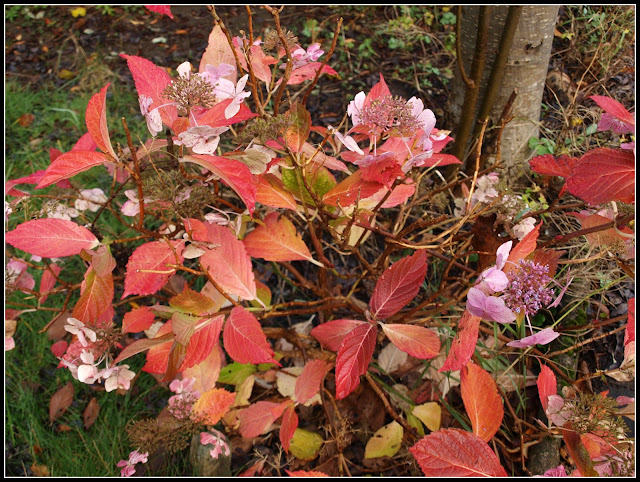 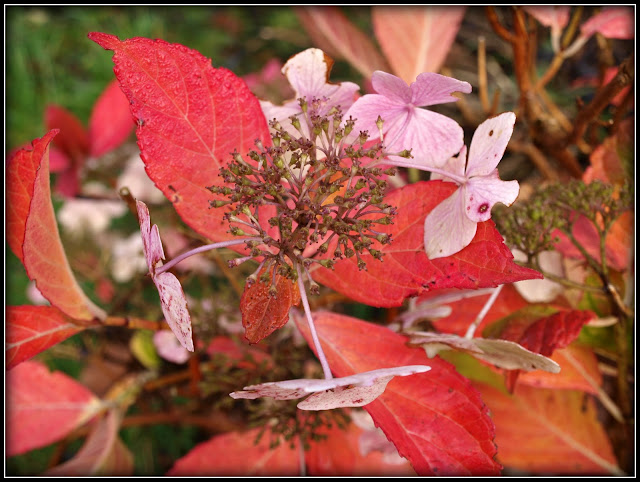 This is a Sedum of some sort - type unknown. 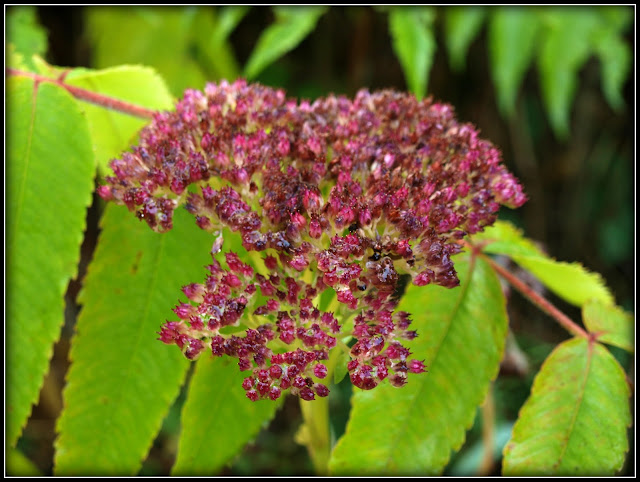 And this I think is Solomon's Seal. 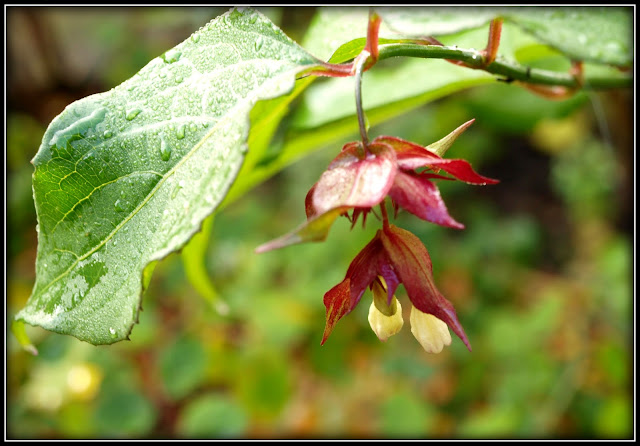 There are huge numbers of Hardy geraniums in the garden (the offspring, from long ago, of plants in my own garden). Their Autumn foliage is strangely appealing, currently exhibiting a wide range of reddish, orangey colours. 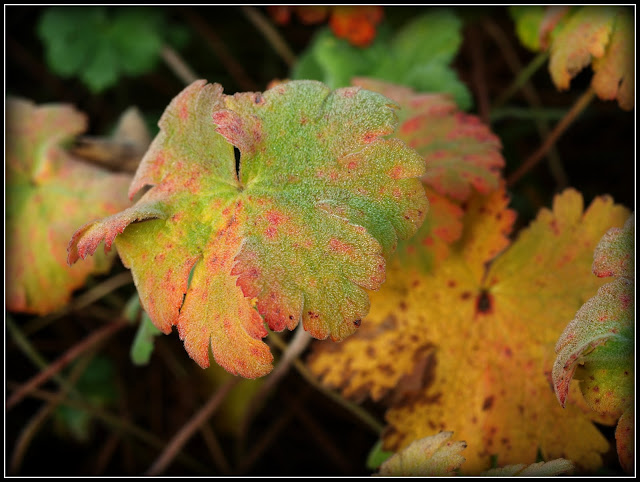 Lurking in amongst the bigger plants I found this very "mature" Arum Lily, (colloquially known as Cuckoo Pint) 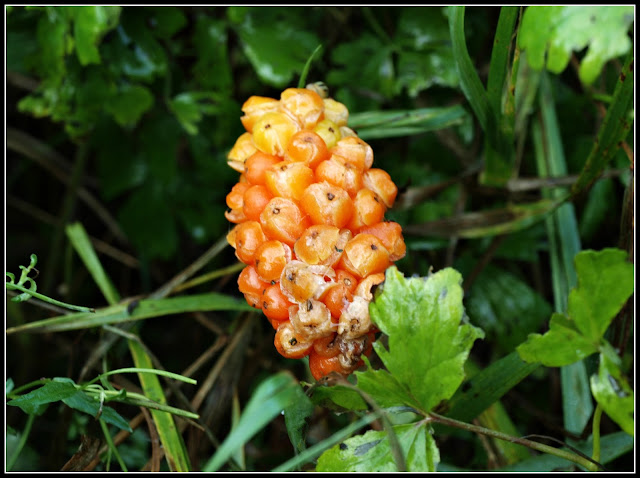 Whilst not Autumny in any way, the glossy variegated Arum Lily leaves are certainly striking. I hadn't expected to see any Nasturtiums hanging on this late in the year, but this one seems in good condition still. 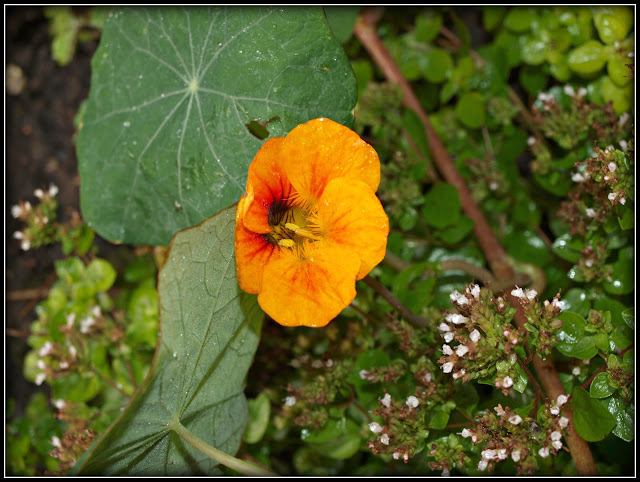 You can see behind the Nasturtium flower some flowering Marjoram. Much of this is again the progeny of plants from our place down in Hampshire. The Golden variety is particularly impressive visually - even though it is practically tasteless and therefore useless as a culinary herb. 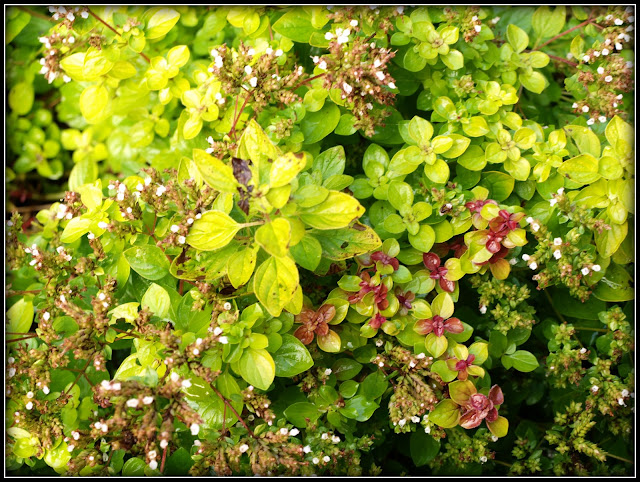 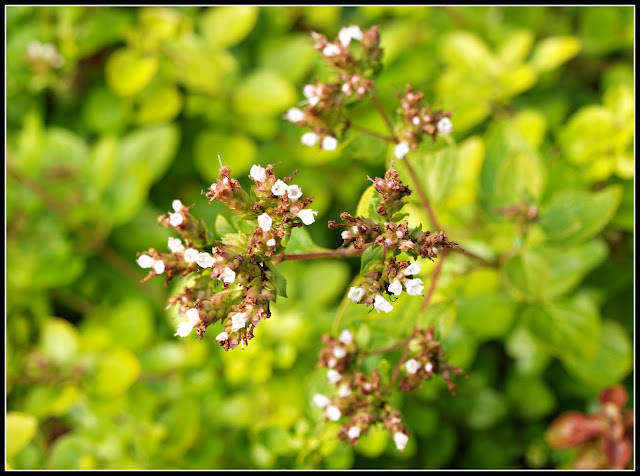 At the front of the house there is a solitary Hebe bush with white flowers which look to me very much like little bottle-brushes! 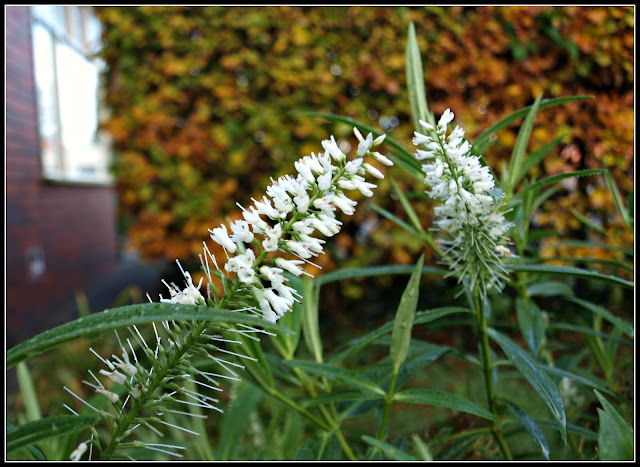 ﻿
I'm not showing you the grass. You know my views on grass, and if you saw my MIL's grass you would understand all too clearly why I had mine replaced by shingle!
Posted by Mark Willis at 16:00