If you follow my blog regularly you will probably have realised that I am partial to game - especially Venison. 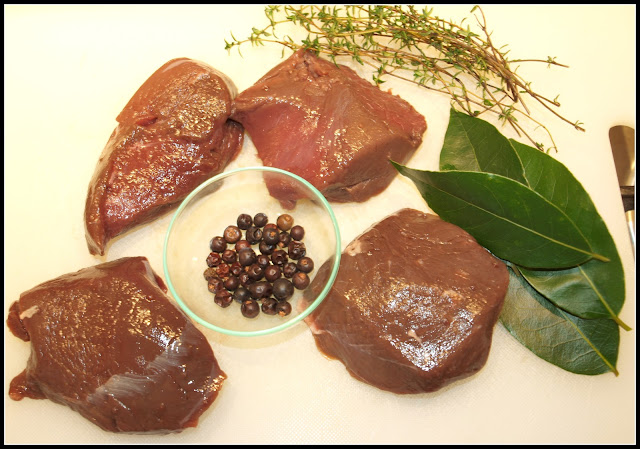 Recently Jane was shopping in our local branch of the Lidl supermarket, looking for Goose breasts, which they normally have in stock at this time of year. Unfortunately they had no Goose breasts, but they did have Reindeer steaks. Not the same thing at all of course, but appealing nonetheless! 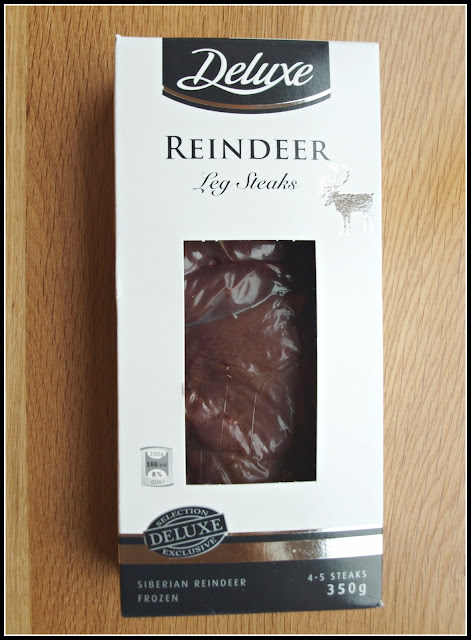 Having experienced Reindeer meat on a couple of occasions during business trips to Sweden and Finland, I immediately "bagged" this meat, with the intention of creating something vaguely Nordic / Scandinavian. And then I noticed that this Reindeer meat came from Siberia, nowhere near Scandinavia at all. Oh well....

The meat was frozen, so the first task was to let it thaw out slowly, overnight in the fridge. Then I marinated it for about 8 hours with a little vegetable oil, Bay leaves, Thyme and lightly-crushed Juniper berries, a splash of Gin (to accentuate the Juniper flavour), and some freshly-ground black pepper.

While this was happening I made some Cranberry relish. 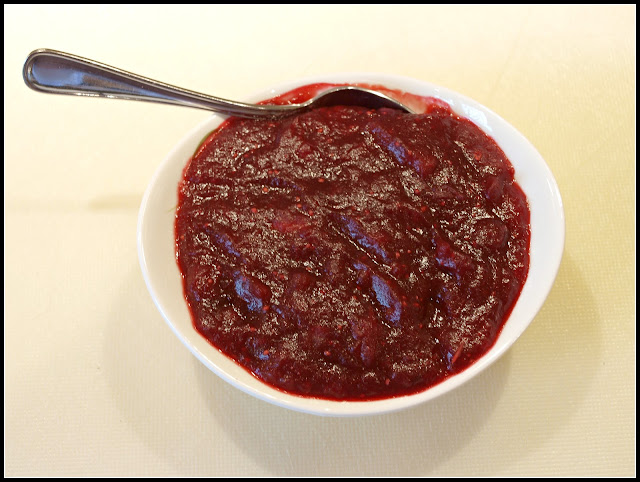 In Scandinavia they would probably serve Reindeer with Lingonberry sauce, but Lingonberries are unobtainable in the UK as far as I know. I thought the fact that my Cranberries were Latvian rather than the more usual Canadian ones was quite appropriate, since Latvia is nearly Scandinavian! 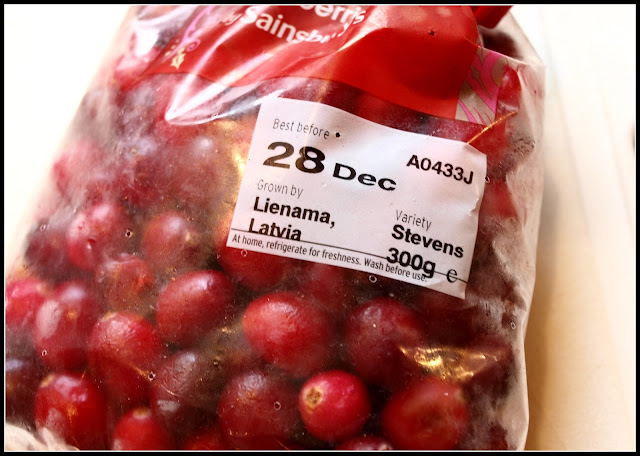 My version of Cranberry relish includes (as well as Cranberries), apple, Creme de Cassis, and Blackcurrant Balsamic Vinegar, with a little Sweet Freedom sweetener (in lieu of sugar, because Jane is diabetic). The smell of this lot cooking was wonderful! Jane said "It smells like Christmas". And the sound was wierd too - as the frozen Cranberries cooked their skins burst with a loud "pop". 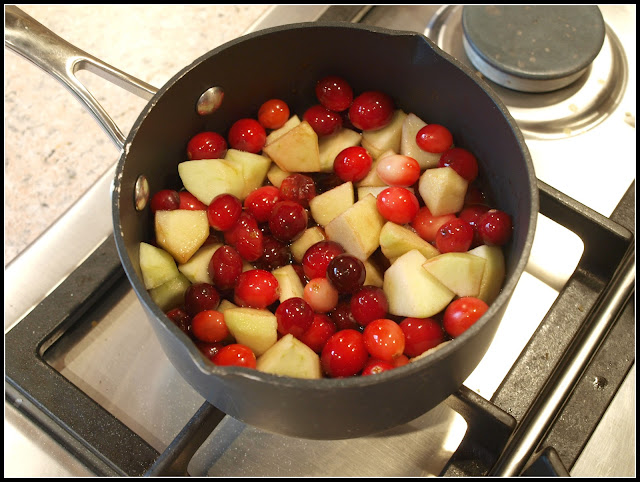 Later on I prepared my vegetable accompaniments for the meat. First up was a handful of Cavolo Nero leaves from the garden. Washed and with their tough central veins removed, these were stirred into some soft polenta, just minutes before serving. They cook very rapidly: 2 or 3 minutes is plenty. 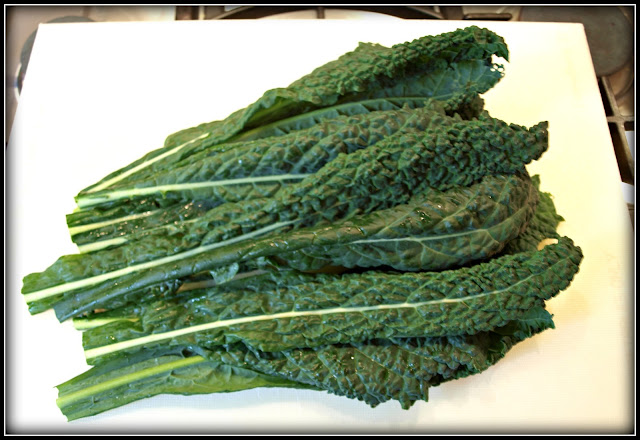 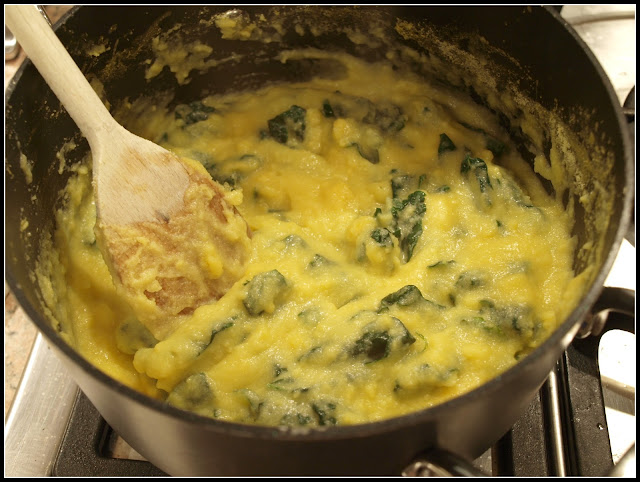 Then there was a steamed vegetable medley, inspired by the presence of my Golden Ball turnip (as described a couple of days ago). I wanted these vegetables to be served plain and unadulterated, so that we could really enjoy their flavour. 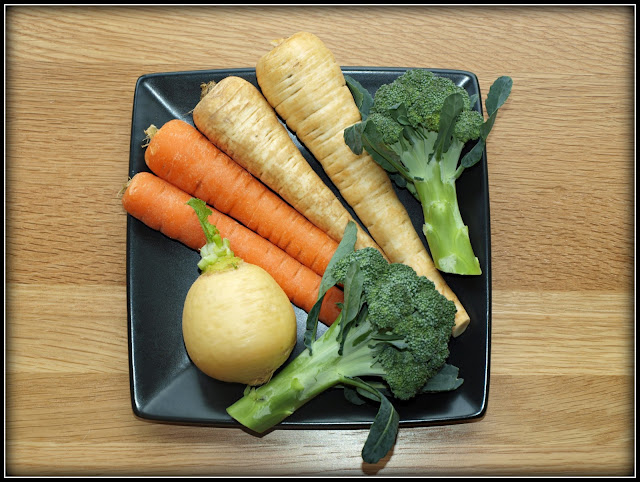 The Broccoli is home-grown too, but the Carrots and Parsnips are from our weekly veg-box (not as good as home-grown, in my opinion, but still very good). In the photo below the green bits are peeled Broccoli stems, which are every bit as good as the florets. I put the Broccoli florets into the steamer only after the other veg was nearly cooked, because they need less cooking time. 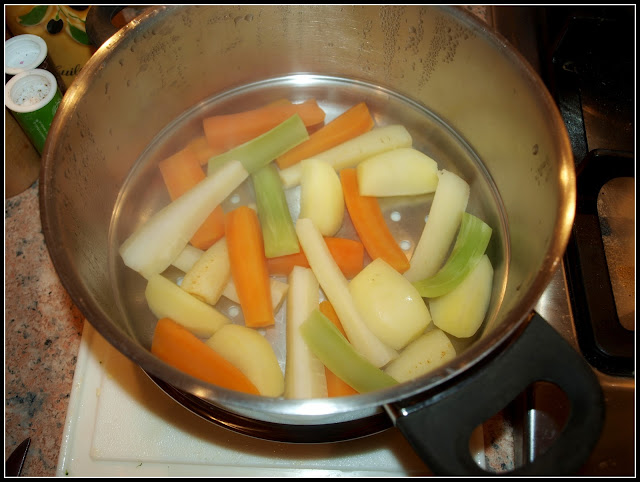 Since I had plenty of time, I decided to make some gravy "from first principles". I used as the basis of this the trimmings of a batch of stewing beef that was waiting to go into a casserole the following day. These were fried for a few minutes until nicely browned; put into a saucepan with some water, and then simmered for about half an hour to extract all the flavour. Having strained the resultant liquor through a sieve to remove the meat pieces, I returned it to the saucepan and boiled it hard for a few minutes, to reduce it to the right consistency. The finished article had a lovely deep savoury flavour.

A short while before starting to cook, I lifted the meat out of its marinade and beat it out thin, using a meat-mallet. (I put the meat inside a plastic bag while I'm doing this, to avoid splashes). 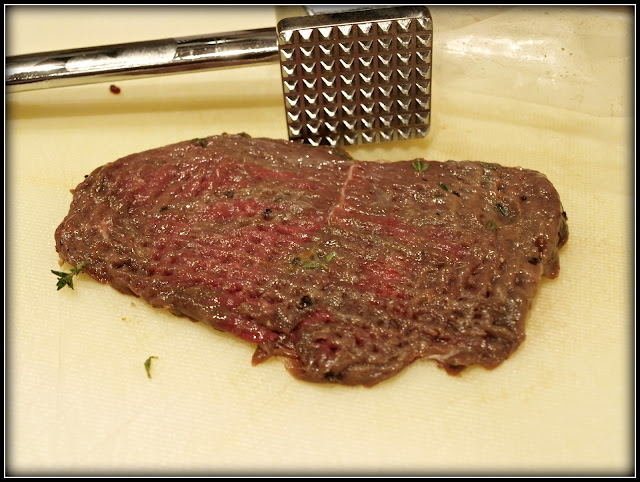 This procedure ensures that the meat will cook quickly. Since it contains little fat,Venison (and presumably Reindeer) is best served on the Rare side of Medium, and will go dry and tough if overcooked. 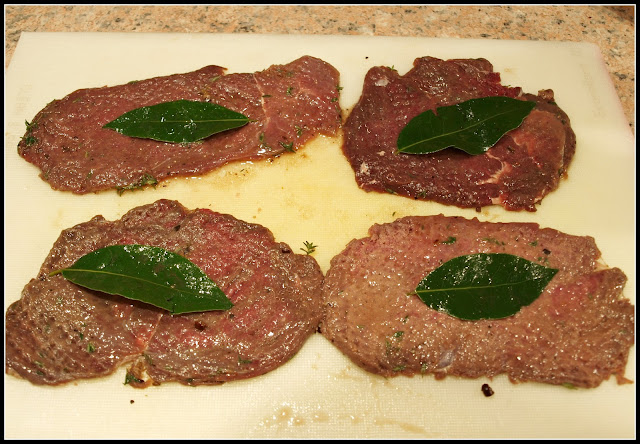 My cooking method for the meat was simply to griddle it in a very hot cast-iron griddle-pan. (No picture available - the opportunity was v. brief!).

So here it is, all together. It's funny isn't it, how the Finished Article often gets the least photographic coverage, since we Bloggers are always in too much of a hurry to get stuck in and eat, whereas the Food Stylists seem to be happy to eat cold food... 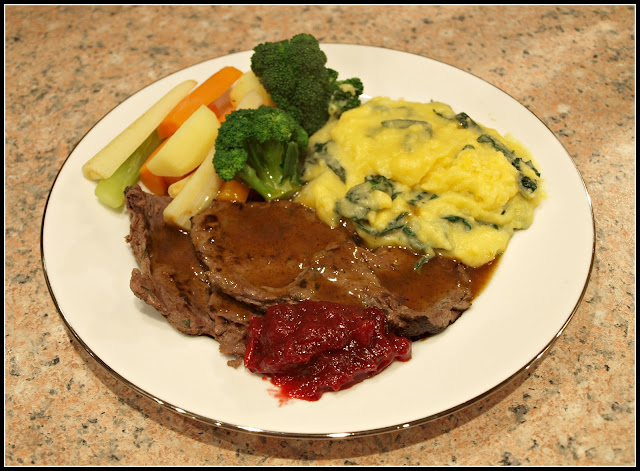 For what it's worth, this is my opinion of Reindeer meat:- very nice, but very similar to Venison. Is that a surprise? Surely not. The meat was tender and full-flavoured, but not unduly "gamey". And the verdict on home-grown Turnip, Broccoli and Cavolo Nero? Ab Fab, of course! Seriously, I don't remember having ever had a Turnip that nice. Next year I must plan to grow a bigger quantity of them.
Posted by Mark Willis at 16:00