The advent of my new coldframe has got me thinking again about crop-protection methods...

The coldframe is initially going to be used as Winter accommodation for most of my potted herbs, though there are quite a few that will have to remain unprotected, simply because I have so many herbs.


Over on the raised beds I have four "Longrow" 1.2-metre cloches, which are now protecting lettuces and endives.


I have not had these cloches very long and I have mixed feelings about them. The principle is great, but there are one or two problems too, which you would do well to consider if you are contemplating buying some yourself. For a start, they are not cheap - about £35 each. For this price you might be justified in thinking that you would get a superior product. However, I have found these cloches to be quite flimsy. The metal bits are very lightweight and bend easily. The main cover is formed by two sheets of corrugated PVC which are held in place mainly by their own springiness, and they have an annoying habit of becoming "unsprung" whenever you move them! The end-pieces too, whilst theoretically good - with their revolving vents and all - are probably the least good part of the whole assembly. 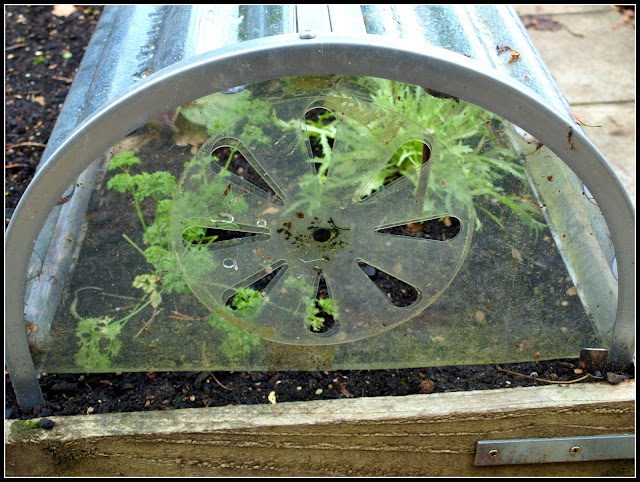 These pieces are exceptionally flimsy and lack a proper system for keeping them in place. Again, they fall off at the slightest excuse. To be honest, I would not recommend that you buy any of theses cloches. On the other hand, if you could find some that are made in the same style but with proper, durable, quality materials, they would be highly desirable. They don't make stuff like they used to in the old days, you know! (Yes, I know I'm sounding like a crusty old curmudgeon now - but it's true!)

Oh, an afterthought: one unforseen advantage of the long cloches is that they do actually provide a significant amount of wind-protection for plants outside the cloches but downwind, such as these parsnips (though I think the parsnips are probably hardy enough not to need such mollycoddling...). 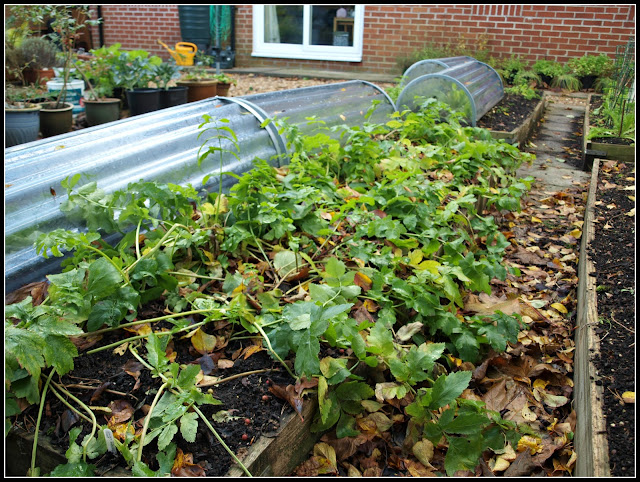 Elsewhere in the garden I have a number of plastic bell-cloches.

I think these are quite good. Certainly good value for money. I bought 3 like the one above for only £10. This type is big enough to accomodate a fairly large plant. The one in my photo it is actually protecting three endive plants. It has a swivelling vent in the top to allow hot air to escape. This is a significant advantage in the Spring-time, since it is all too easy to scorch young plants when the sun is strong.

I also have about 6 much smaller bell-cloches without vents, which are much less versatile. They are the survivors of an original 10 (they were sold in packs of five), and I have had them for about 5 years.

Some points to note about the plastic bell-cloches: they are very light, and need to be firmly pegged-down to avoid being carried away by gales. Also they are not impervious to foxes. The cloches that have not survived appeared to have been sat-upon by something presumably heavier than a domestic cat!

You may be wondering if I was going to advocate the use of horticultural fleece. Well, the truth of the matter is that I have tried it on several occasions, and not been impressed. I found that it held an irresistible attraction for all the neighbouring wildlife. The foxes would trample upon and rip it in their nocturnal efforts to locate earthworms, whereas the cats would simply exploit the holes made by the foxes, as a means of entry to what they interpreted as tailor-made cosy night-time shelters (oblivious of course to the existence within them of all those delicate plants).

Another problem I encountered was that the fleece would become heavy when wet, and was wont to sag in a big way. Also of course it tends to collect snow. Most plants can survive a long slow flake-by-flake accumulation of snow, but not a sudden avalanche caused when the "protecting" fleece finally gives way and falls on them.

So, now you know my thoughts on crop-protection. What are your own views and strategies?