Down at the bottom of my garden, in a dry shady place where nothing else will grow, I have a small patch of Comfrey. Actually, come to think of it, the patch is smaller than ever this year... There are basically only two plants now, the one in this photo and one that is round the side, almost out of sight between the two compost bins. 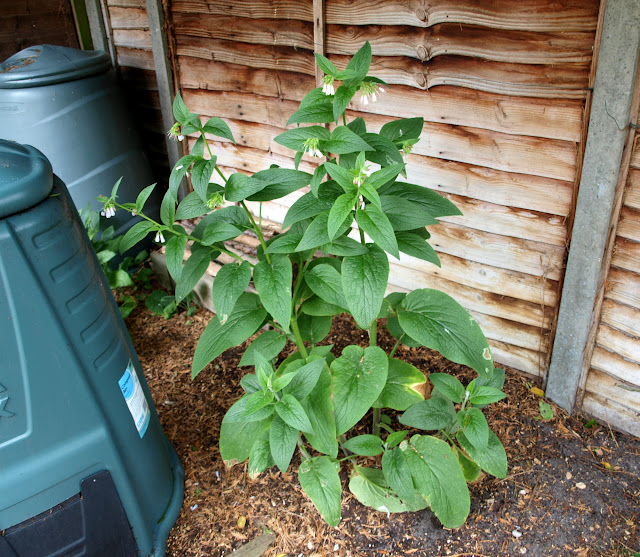 Comfrey has quite attractive flowers... 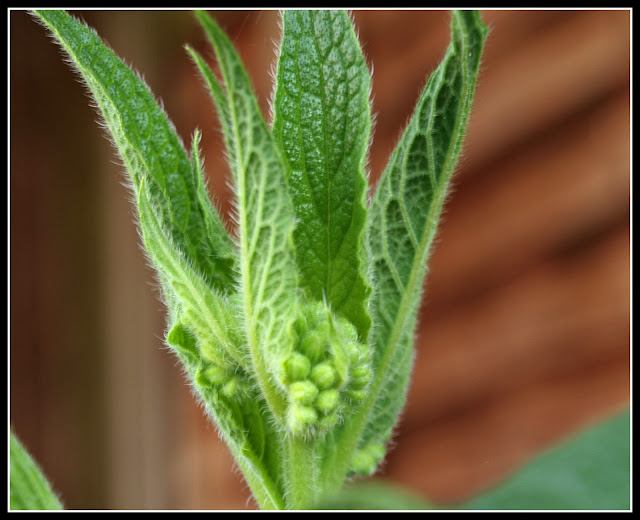 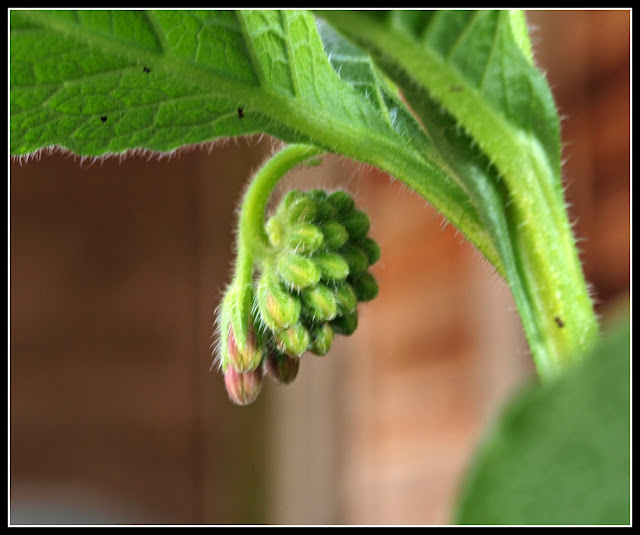 But I don't grow it for its flowers, I grow it for using as plant food. Comfrey puts down deep roots that search out nutrients well below the soil surface and it uses these to build big fleshy stems and broad fibrous leaves. These leaves and stems, chopped and added to your compost bin will give your home-made compost a big boost. I prefer to use it to make a liquid plant-food usually referred to as Comfrey Tea. Why "Tea", I wonder? Presumably people think that it follows the same principles as the normal type of drinking-tea: add some leaves to water and drink the resulting infusion...

Making this tea is very simple. You cut the plants down to nearly ground level, chop them up (stems and leaves) put them in a large container such as a plastic dustbin or simply a bucket... 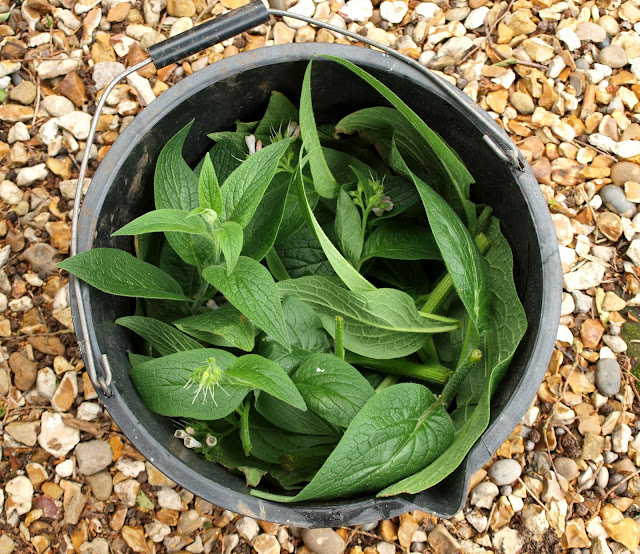 Then fill the bucket with enough water to cover the leaves, and set it aside for a few weeks. If you can arrange this, it's best to cover the bucket with a lid of some sort, to prevent things falling into it (such as beetles, small rodents and more rainwater! You will need to put your container somewhere well away from your house, because the Comfrey rots down very rapidly and comprehensively, ending up as a slimy dark green / brown sludge with an evil smell. This is your finished product, and it's full of nutrients that your veggies will love. It has good levels of the three main elements that plants need in order to flourish: Nitrogen, Phosphorus and Potash (NPK).

The speed of the decomposition process depends on the ambient temperature. Higher temperatures promote quicker decomposition. I normally find that the tea is ready for use in about three to four weeks. The stems rot more slowly than the leaves, so I use the mixture in two batches. I pour off most of the liquid into a watering-can, and then top-up the remaining sludge (which will be mostly stems) with some more water and leave it another week or so before using it. A point to note is that the liquid will be full of fibres which will inevitably clog the holes of your watering-can's rose, so its perhaps best to remove the rose before using the can for Comfrey Tea.

I use my Comfrey tea on plants that produce fruits - such as Tomatoes, Squashes, Beans and Chillies. Since I don't have a lot of Comfrey I can't make a lot of tea, so I use it sparingly, and I generally don't use it on leafy vegetables. I also recommend diluting the Tea to make it go further. If I remember, I'll show you the finished result in a month or so, when the first batch should be ready to go onto my Tomatoes.

I know that Comfrey is easily propagated by root division and/or stem cuttings, so I have planted a few cuttings. These are simply sections of stem (mostly with a leaf attached), buried in the ground.


Due to the huge amounts of rain that we have had recently, even this area of the garden, which practically never gets any rain, is at least damp, so I'm hopeful that a few of the cuttings will take root.

If you would like more information on the cultivation and use of Comfrey, here's a good place to start:- an article all about it on the website called allotment.org.uk