I am not harvesting much at present. I'm waiting. Waiting for that elusive bumper harvest which is going to happen when the weather bucks its ideas up (so probably never, then).

If we got a bit more sun, these chillis would soon ripen:


Actually the chilli plants are looking pretty luxuriant, as a result of the huge amount of rainwater they have
consumed recently. Bang goes my plan to make them hotter by putting them under some stress by giving them less water. This plant has naturally divided itself into four main growing points. This should mean that it produces lots of fruits. The only trouble is the fruits will not set if they are not pollinated, and I don't see many pollinating insects flying around at present. I've seen hardly any hoverflies so far, and only a few bees. 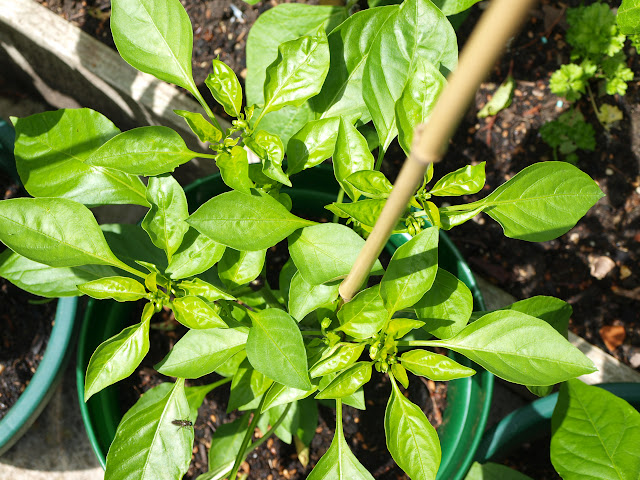 See how "weathered" this chilli flower looks. What self-respecting bee would find that attractive? 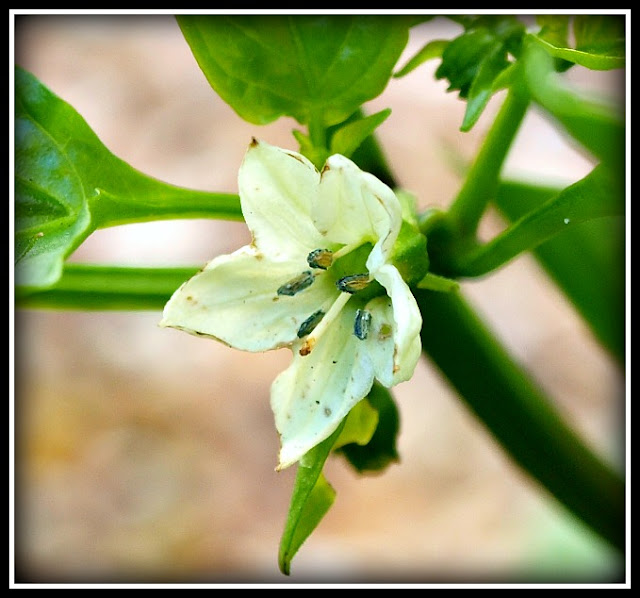 However, on the plus side, the Blueberries are OK, and the fruits are swelling-up nicely. They actually enjoy moist conditions. 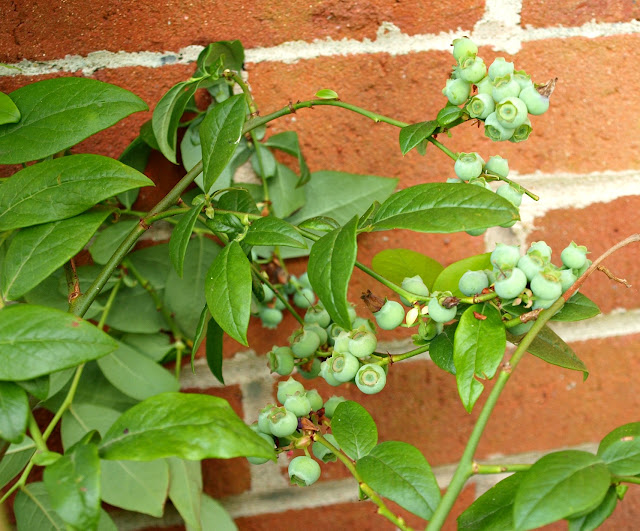 When is the best time to prune Blueberry bushes? Does anyone know? A couple of mine are getting very tall and straggly, with lots of new growth at the top, but little down below. 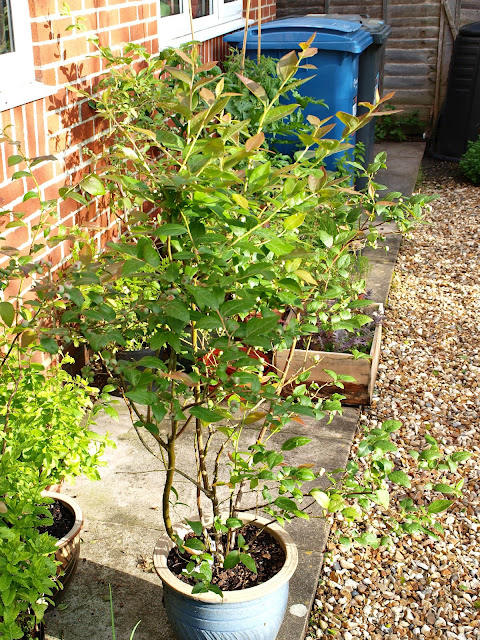 The fruit is borne predominantly on new growth, so pruning out some old wood from time to time is desirable, and besides, I'd like to make the plants more compact. I suppose it would be silly to prune the plants before they have finished fruiting, but will that be too late in the year for them to recover from pruning and put out some new shoots?

By the way, one of my blogging friends, Veggie PAK of  Back Yard Organic Vegetables, has recently published an article about how he protects his Blueberries from birds, which is well worth a read.

The plentiful rain has meant that the Asparagus has continued to put up new spears. It doesn't produce as much as I would like, but it's definitely worth having because it is just so nice! I'm going to stop cropping it soon, to give it time to build up its strength for next year.


Of course, some other plants have already "done their thing" for the year, such as the Snakeshead Fritillaries, whose seed-pods are now ripening and distributing their seeds: 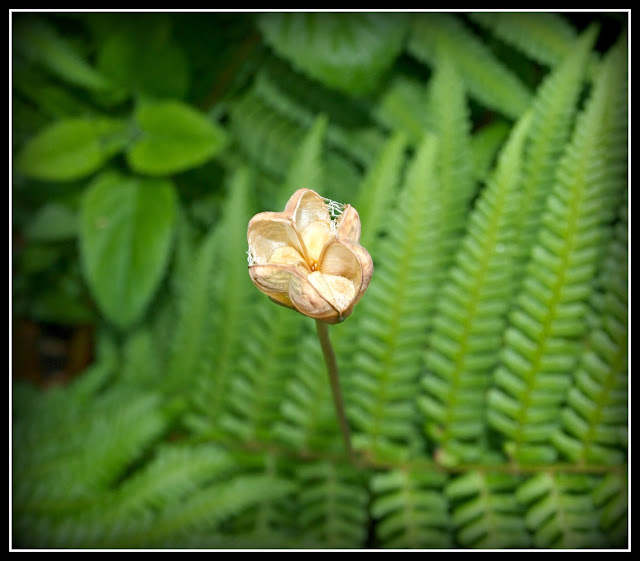 It would be really nice if I could establish a permanent patch of these very striking flowers.

Elsewhere, my Rhubarb flower finally peaked at a height of 1.92 metres, and has now set a vast quantity of seed. Has anybody out there successfully raised Rhubarb plants from seed? Is it worth a try? 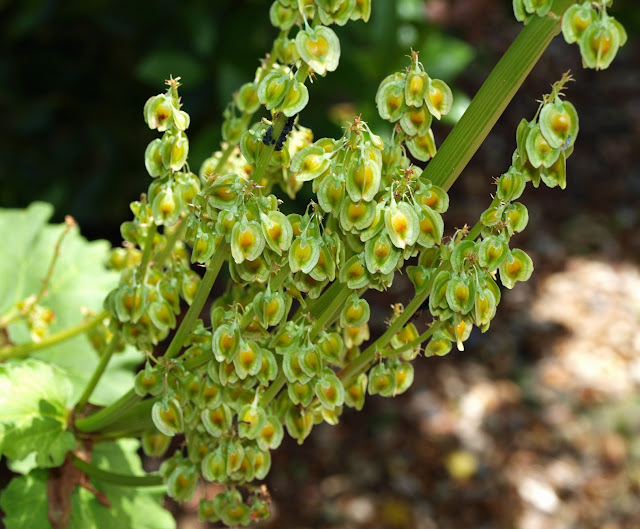 ﻿I already know that this next plant has little difficulty in reproducing. It is the herb Good King Henry. Every year I pull up from the raised beds vast quantities of little GKH seedlings. 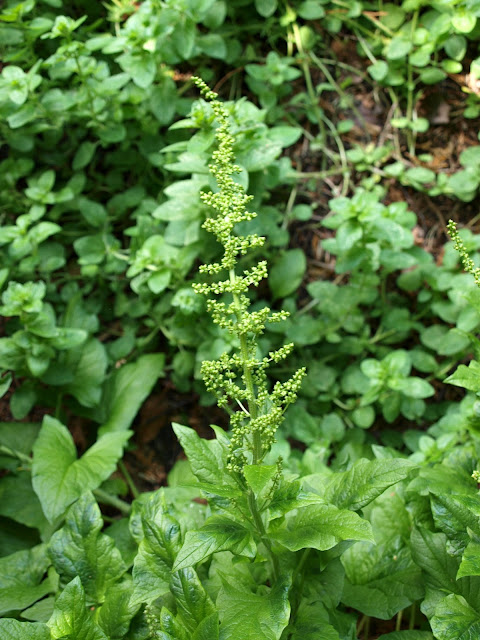 So then, patience... Sit back and wait for stuff to happen.

Late addition: I have harvested a few more strawberries. This time I think even Mr.Tesco couldn't reasonably complain about the shape, colour and uniformity of these little beauties: 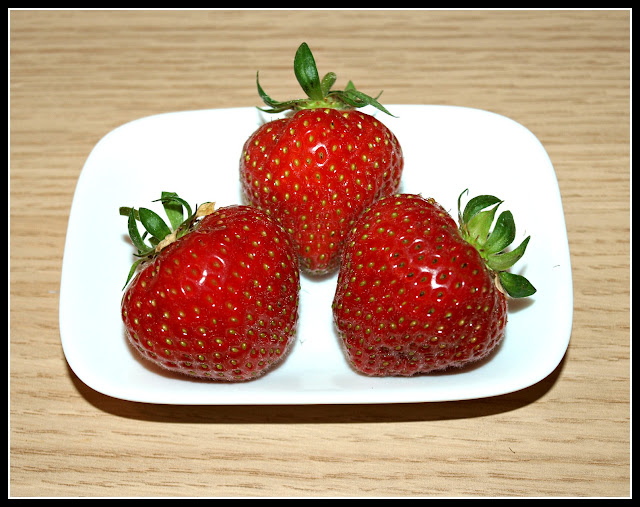 Now if only I had a kilo of berries like that....