Following on from the success of my "Tapas" post the other day, I now present for your delectation the latest offering from the Mark's Veg Plot kitchen... I perhaps hadn't realised that so many of my gardening blogger-buddies are quite so interested in food too - but I'm very pleased that they are! I'm also following up on my recent post about Broad Beans, because I know that many readers in the UK and elsewhere will be picking their first harvests of this delicious vegetable round about now.

This is Medallions of Pork Tenderloin, in a creamy green peppercorn sauce, with baby Broad Beans, served on a bed of minted pea couscous. 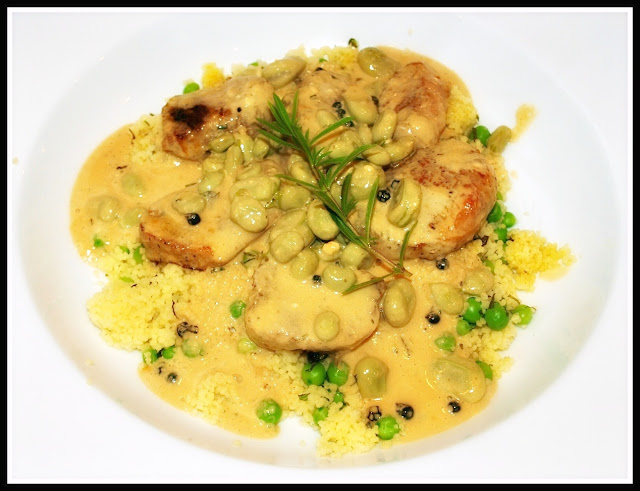 You might think it sounds a bit fancy, but I assure you that it is dead easy to make, costs a modest amount, and can be ready in minutes. This is how:-

For this dish I used a cut of meat called pork fillet, otherwise known as tenderloin. It is a surprisingly cheap cut. Enough meat for two people costs about £4 in a supermarket. The cut is long and thin, so for my dish I cut it into twelve "medallions" approximately 2" thick.  I covered my medallions with a generous grinding of fresh black pepper and left them to stand in the fridge for a couple of hours.

After preparing the meat I shelled the peas and podded the Broad Beans. Both of these were young and tender examples of their kind. Not, regrettably, from my own garden - though I'm working towards that. Mine will be ready in about two or three weeks' time, but I was just too impatient. As soon as I saw them in the shops I wanted them immediately! 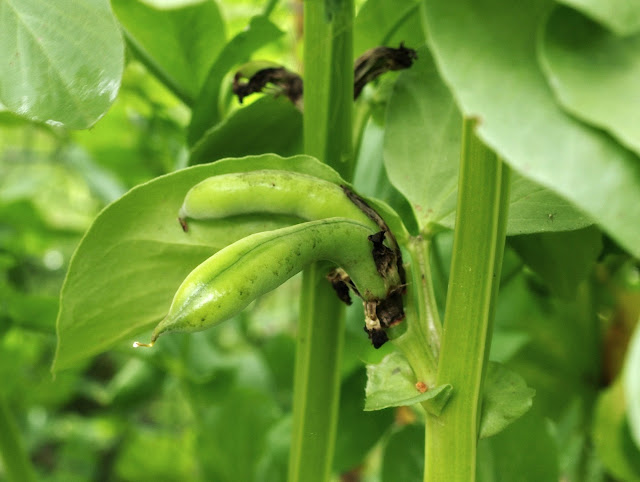 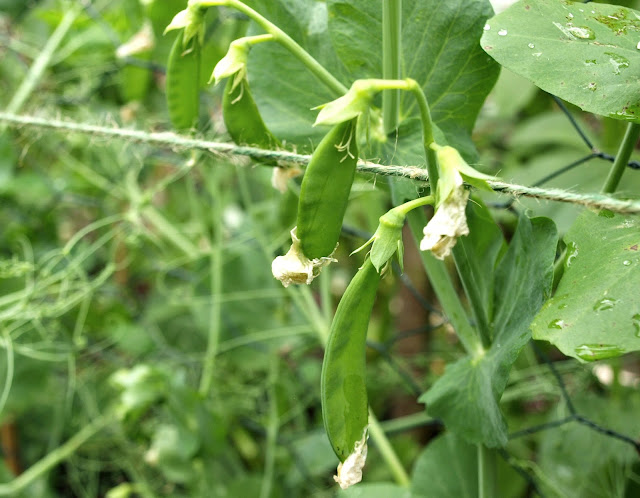 About half an hour before eating time I started cooking. First job was to brown the meat in some oil in a large frying-pan: 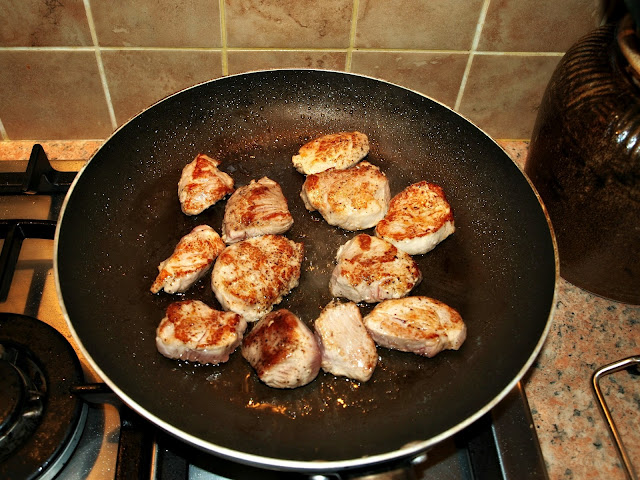 While this was happening I cooked and drained the Broad Beans. When they are young they only take a few minutes to cook. After they were done I put my fresh peas into a pan of boiling water and cooked them for literally two minutes.

Now I made the couscous. I added 300ml of boiling water to 150g of "quick cook" couscous and left it to stand for a few minutes before adding the cooked peas and a slack handful of chopped fresh Mint (from the garden!).

By now the meat was cooked through and browned on both sides, so I removed it from the pan and kept it temporarily on a warm plate while I made the sauce. The sauce was made in the same pan in which I browned the meat, thus making maximum use of the meat juices (which accounts for its rather "mushroomy" colour too). The sauce started with a tub of Elmlea low-fat cream with the addition of two tablespoonsful of Creme Fraiche to thicken it. Into this went a dessertspoonful of green peppercorns, and about a teaspoonful of finely chopped Winter Savory (again from the garden), a herb that goes incredibly well with Broad Beans.

[Note: green peppercorns are slightly crunchy - though not hard like the dried black ones - so you might wish to lightly crush them before adding them to your dish. They add a pleasantly mild peppery note - just the right sort of thing for a sauce like mine!]

When the sauce was bubbling away nicely I added the pre-cooked Broad Beans and then the meat once more: 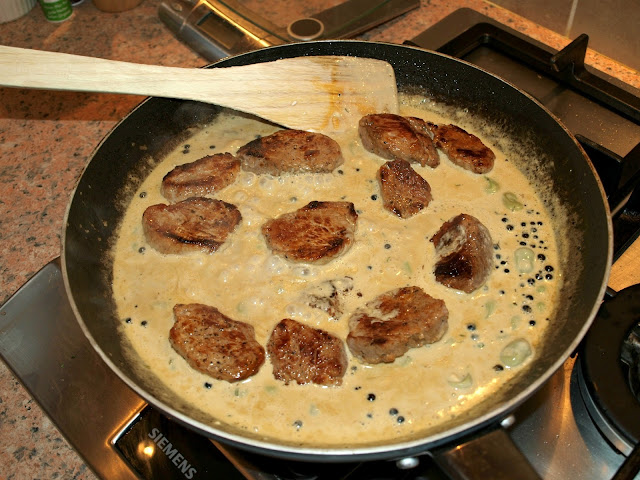 At this stage the pork doesn't really need any more cooking. You just need to warm it up in the sauce, which only takes a minute or two.

Next thing - fluff-up the couscous with a fork to make sure it has absorbed all the water. 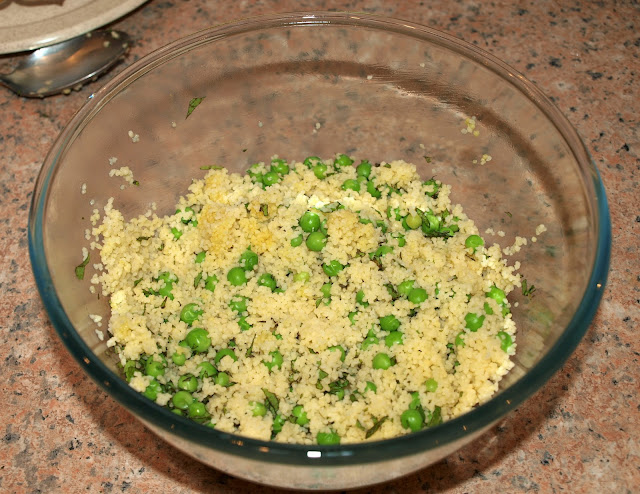 Now we're ready to plate-up... Adding a sprig of Savory as a cheffy garnish. 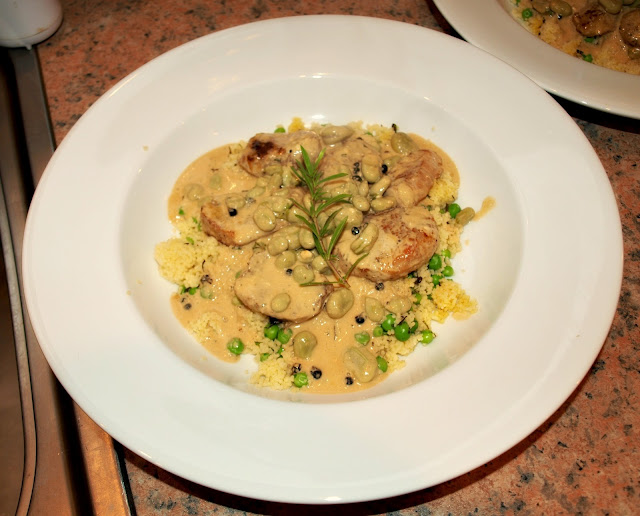 So there we have it: Pork Tenderloin medallions with creamy green peppercorn sauce... 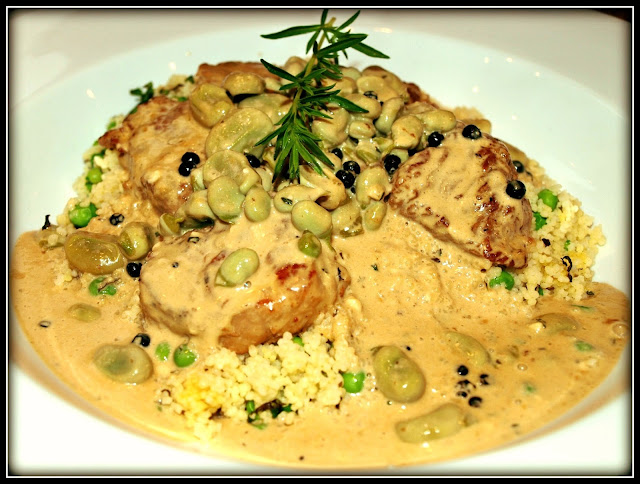 Wine recommendation: a robust Rosé would be a perfect accompaniment to this dish.
Posted by Mark Willis at 17:30