During the so-called "Summer" months I normally write mostly about gardening, reserving my food-related articles for the Winter, but the Summer has yet to materialise here in the UK (unless that warm week at the end of May was it...), so here I am writing about food!

I consider myself to be a food-lover rather than a chef (although my repertoire is expanding), and I tend to cook unsophisticated food in simple style. This post is about a meal I put together the other day. It has a sort of Mediterranean Tapas / Meze / Anti-pasti theme to it. I wanted to produce a number of small dishes rather than one big one, so this is what I came up with.

The first course was a plate of Hors d'Oeuvres (we usually just call them "nibbles"!), accompanied by a glass of 12-year old Oloroso Sherry.  In the photo: left to right: Olives, Gherkins, Cheese, Air-dried ham, Smoked Almonds. 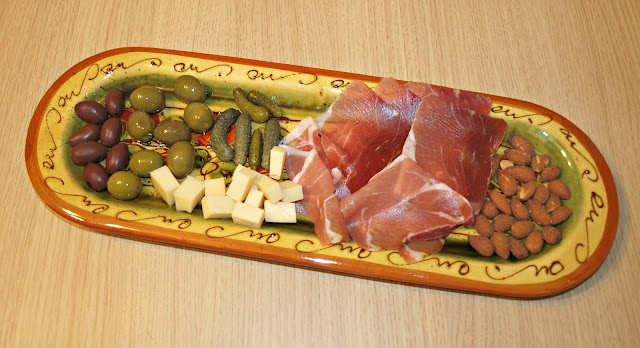 I just want to show you a view of the plate on which this was served. It is one we bought in Provence last year. I love it, and it is eminently suitable for serving this sort of food. 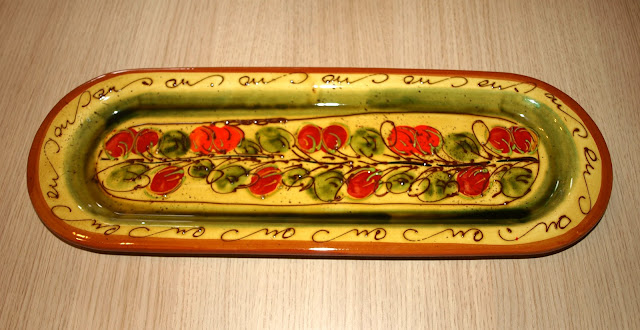 Dish number two was vaguely Spanish: Chorizo and potatoes, with onions and garlic, cooked in a frying pan. The potatoes were par-boiled already. I used only a tiny amount of oil in which to soften the onions and garlic, because once the Chorizo begins to cook it releases some fat of its own, and adding too much oil would have made the dish greasy. I just love the way the sweet yet spicy paprika in the Chorizo oozes out and permeates the whole dish. 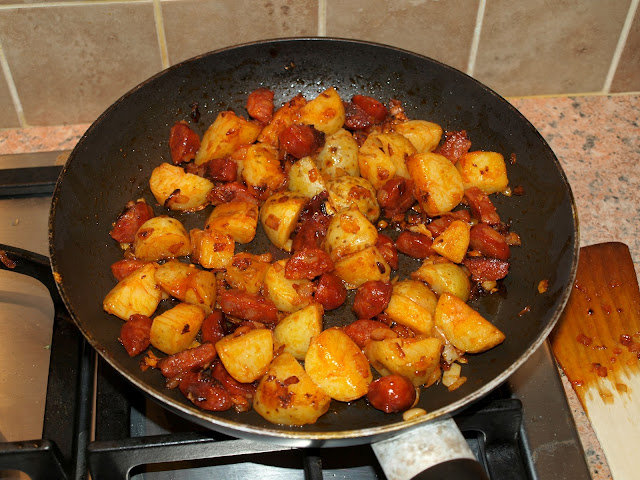 I served the dish in a couple of very Mediterranean bowls. 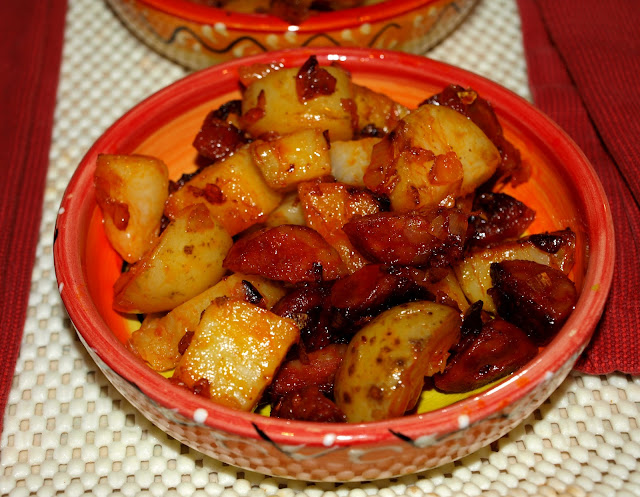 Again, you can't see what the bowls are like when they are full of food, so here's another view. This sort of hand-painted rustic glazed earthenware can be found all round the Mediterranean area. Every one is unique. 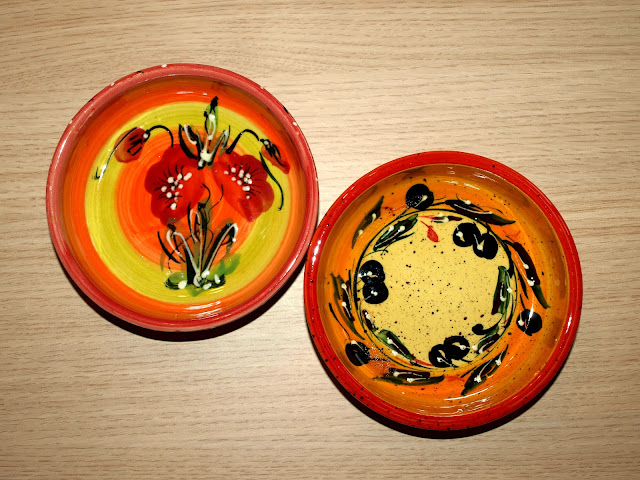 Dish number three was vaguely North African: Chick Peas in a spicy tomato sauce, flavoured with fresh and dried Oregano and dried Chilli flakes. This one was ridiculously easy. All I had to do was put the ingredients in a pan and warm them up! Actually I did simmer it gently for a while to thicken the sauce a bit. My dish used tinned tomatoes and tinned pre-cooked Chick Peas. If I had had any I would probably have preferred to use fresh home-grown tomatoes. At least the fresh Oregano was from my own garden. 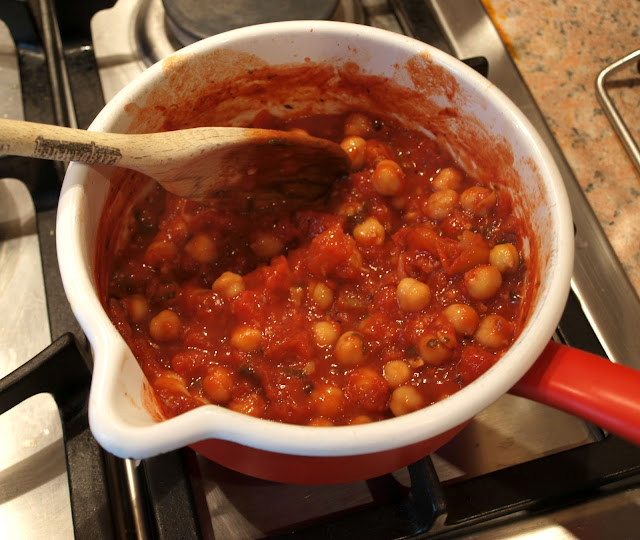 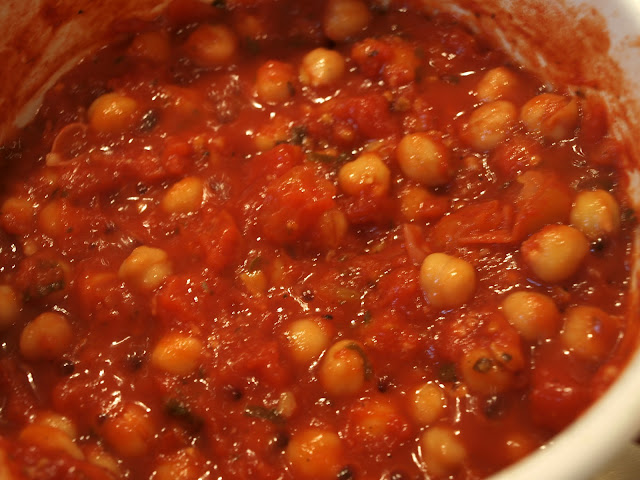 At this point I would like to mention that we had started to drink with these dishes a bottle of what we had hoped would be a nice wine. It was a Chilean Carmenere, from Casillero Del Diabolo (normally very reliable). Unfortunately one sniff followed by a very tentative sip was enough to tell us that the wine was corked (gone bad). It had a horrible taste and smell! So plan B was rapidly invoked and we ended up drinking an Italian Primitivo del Salento, which was nice but not up to the standard of a good Carmenere!

Actually the advent of the Italian wine was no bad thing because my final dish was a Pea and Bacon risotto. 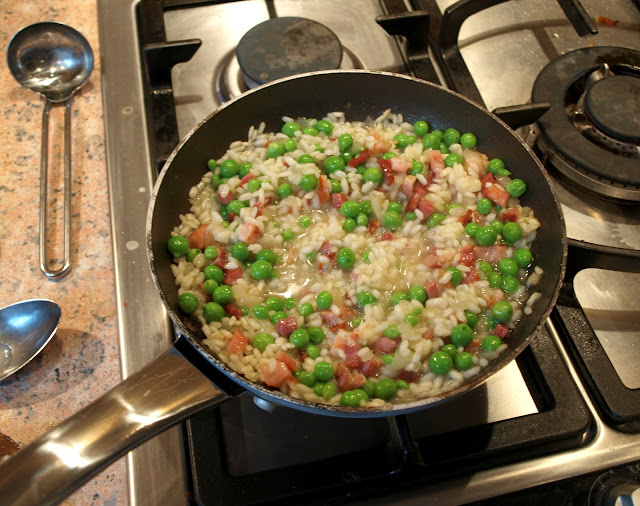 I'm not in the habit of providing full recipes for my dishes - and anyway most of you will already know how to make a risotto - but let me just say on this occasion that I fried my bacon lardons first, until well coloured, and then removed them, leaving some nice tasty fat in which to soften the onions. The peas were fresh ones (from the supermarket I'm afraid), and I added them towards the end of the cooking time since they only take five minutes or so to cook. For a good risotto it is important to use the right type of rice, and your usual long-grain or Basmati rice will not do. Use a short-grain type, such at Arborio or Carnaroli. They produce a much creamier texture - which I enhanced by adding some finely-grated Parmesan cheese.

When ready (patience is always required for a risotto), I served my dish with a garnish of shaved Parmesan and some Rocket picked from the garden: 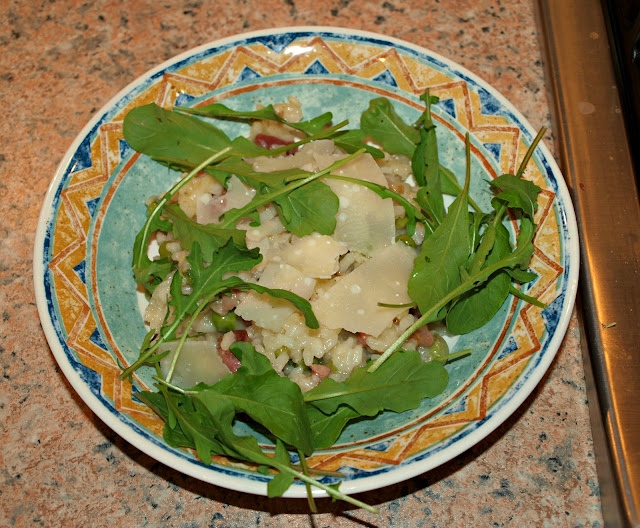 In retrospect I should have delayed the photo until after adding a few generous grinds of black pepper...

Well , I don't know what you think, but we liked it! Just in case you think we were being greedy, I should perhaps point out that each individual dish was quite small and all of them together only added up to what most people would consider a "normal" meal... (honestly!)
Posted by Mark Willis at 17:30