With the beginning of June now upon us, the emphasis of my gardening efforts has switched. The mini-greenhouses and cloches are relegated to secondary importance, the raised beds are full of plants once more, and the garden is bulging with pots and containers. With time available over the long weekend, I decided that a spot of reorganisation was necessary...

This is what the plot looked like before I started (photos actually taken on the 24th May, before we went away).

This is the border which has the Dogwoods and Cotinus in it - and the big tub with the "Cobra" climbing beans. 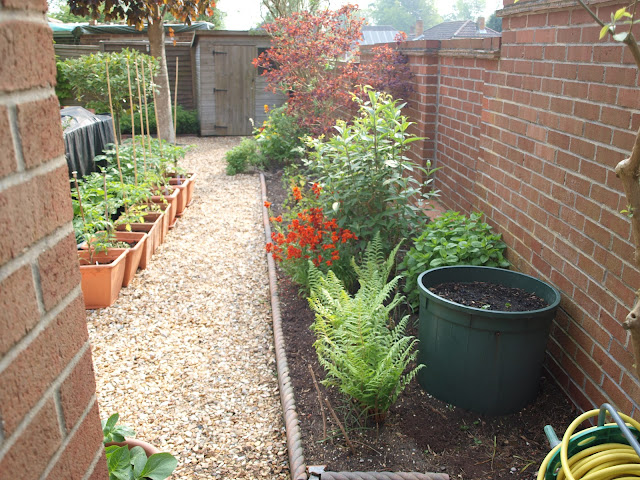 All round the patio is a jumble of potted tomatoes, potatoes, herbs etc. In the background is the Nursery, aka my three mini-greenhouses. 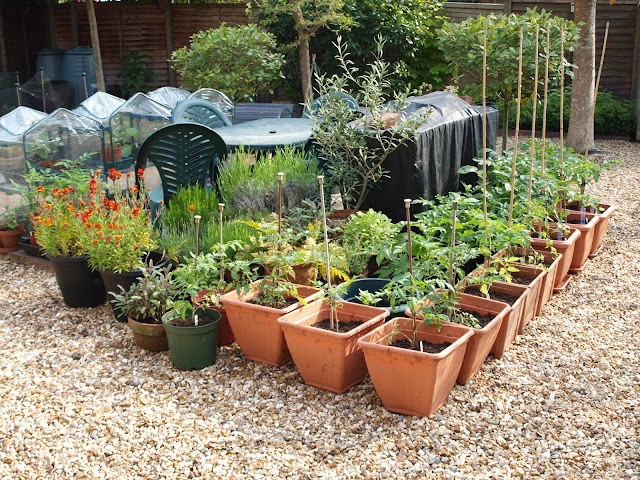 Further round, a view of the raised beds, with the bamboo bean-poles at the front, and the Three Sisters bed behind, still sporting its plastic cloches over the "Butterbush" squashes. 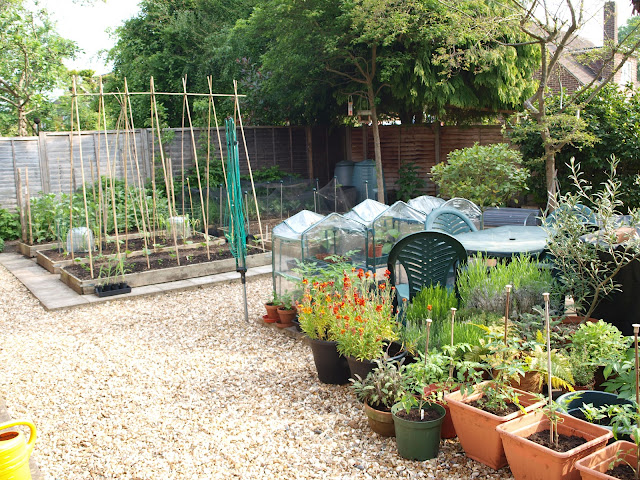 Swinging still futher round, you can see the boxes of salad and pots of Geraniums in the foreground, then the potted Blueberries close to the wall of the house, and finally loads of herbs just in front of the dustbins. 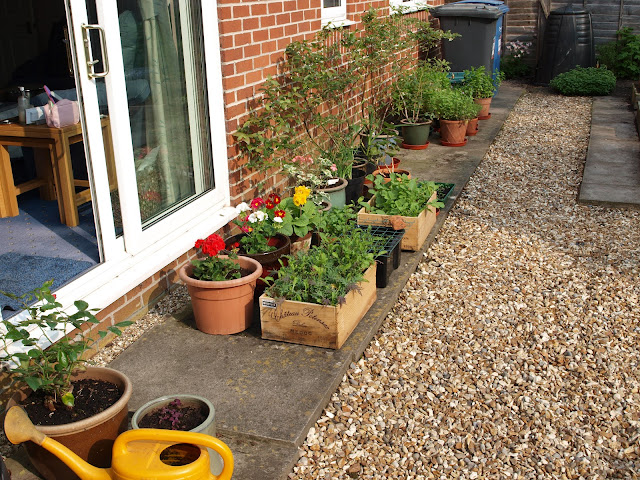 Completing the 360 degrees, this is the Seedling Greenhouse full of chillies, next to the water-butt. This photo was taken on 31 May. 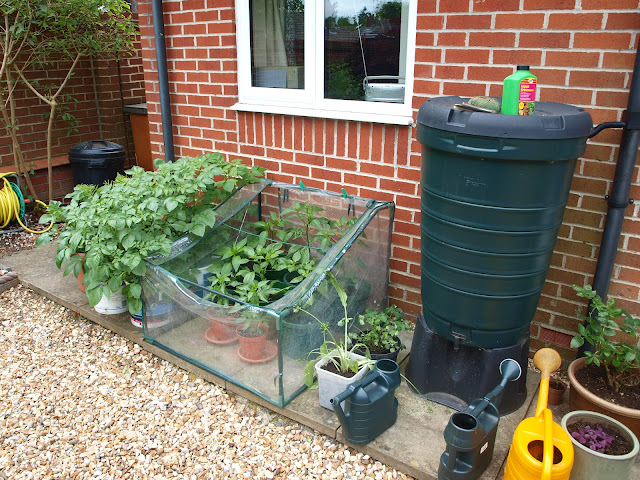 Yes, I know you'll say "That looks tidy enough for me", but my OCD nature demands something more "structured".

So here are the "After" photos:

The "Cobra" beans now have canes to climb up, and have had to share their tub with six "Mechelse Tros" beans. (These are the ones nicknamed "The Mushy Pea bean".) 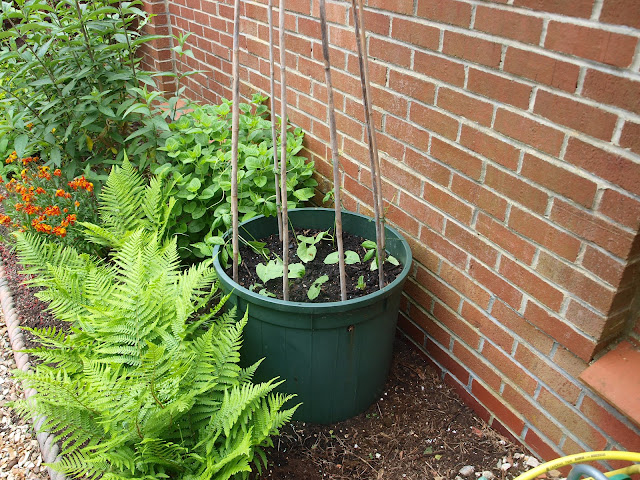 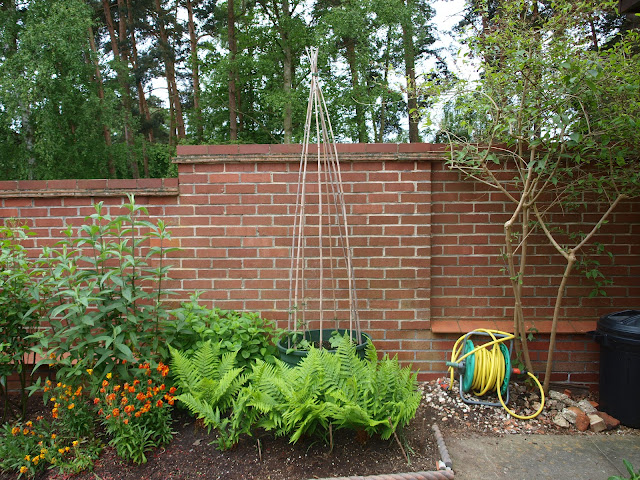 The Tomato plants have been re-located, leaving the tubs of Potato plants much more easily accessible for watering. 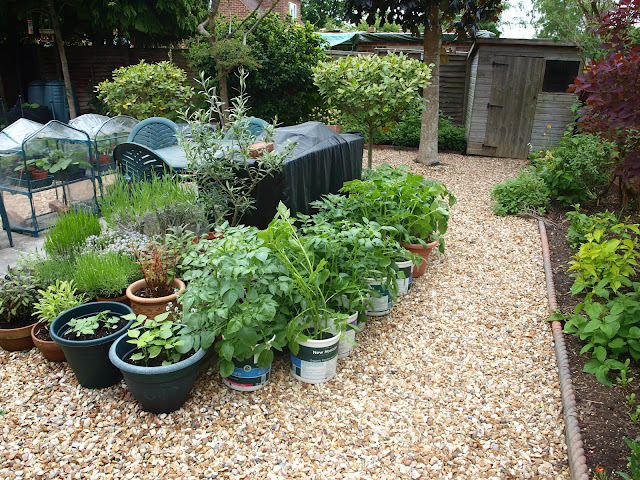 The big green pots in the right foreground hold Dwarf French Beans - 5 each of "Speedy" and "Polka". 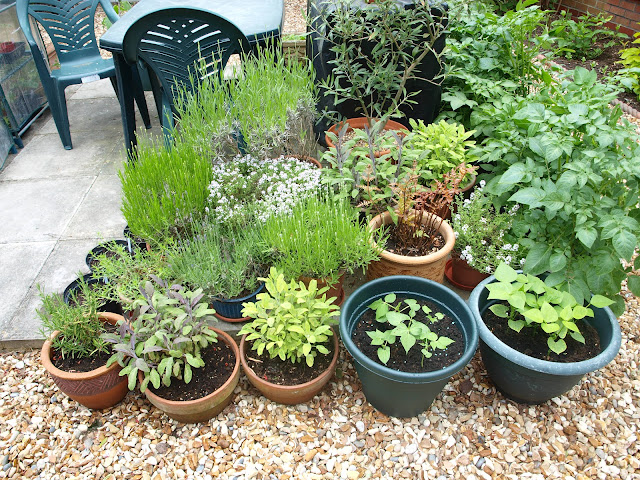 The Chilli plants have now been ranged in a line alongside the Runner Beans. 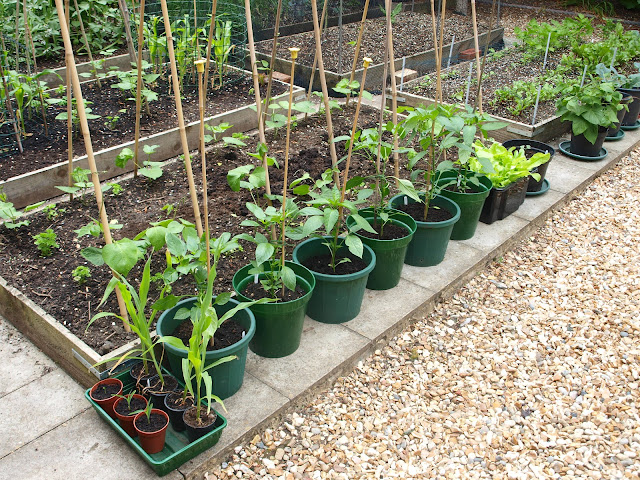 Three potted Tomato plants have joined the herbs beside the wheelie bin. For those of you who live in places where these things are not used, "Wheelie Bins" are wheeled refuse containers in which household waste is removed by our Council. Different colours are used for different purposes. Our blue one is for recyclables like paper and plastic bottles, whereas black is for general waste. Some people also have green ones for garden waste, but I don't: my garden waste is composted. We also have a crate for recycling glass bottles and jars. 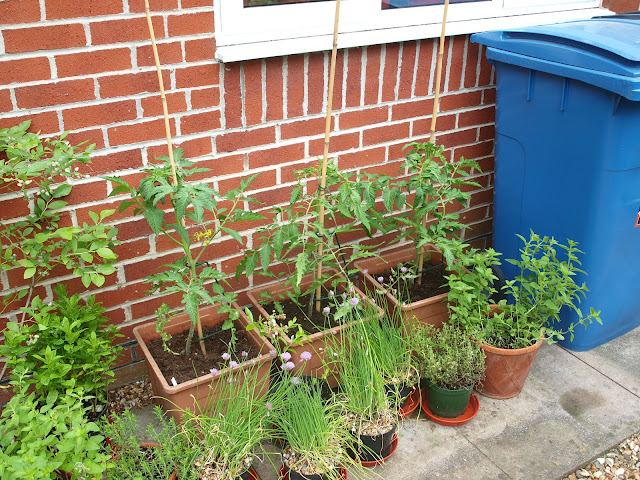 The collection of pots and containers along the side of the house has changed, and now includes Tomatoes and the two "Turkey" chillies. These latter narrowly escaped disaster when I tripped over on the shingle and fell on top of them. Fortunately only a few leaves were lost (and a bit of pride). The red Geranium has gone round to the front, where it has replaced the pot of Polyanthus by the front door. 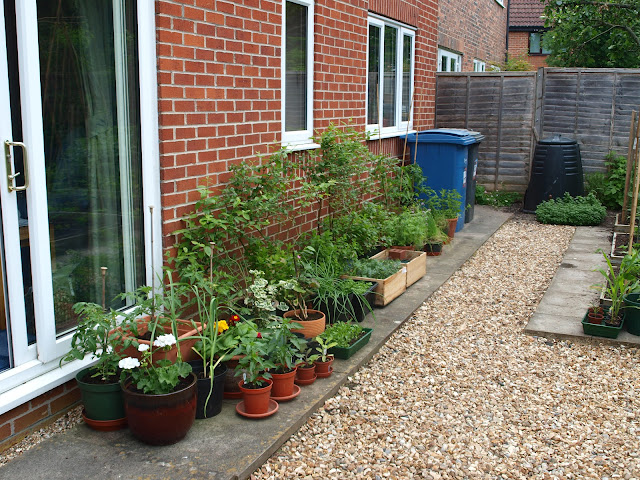 And here is the place where the chillies used to live. Three tall cordon-style Tomato plants and three shorter bush-style ones have replaced them. 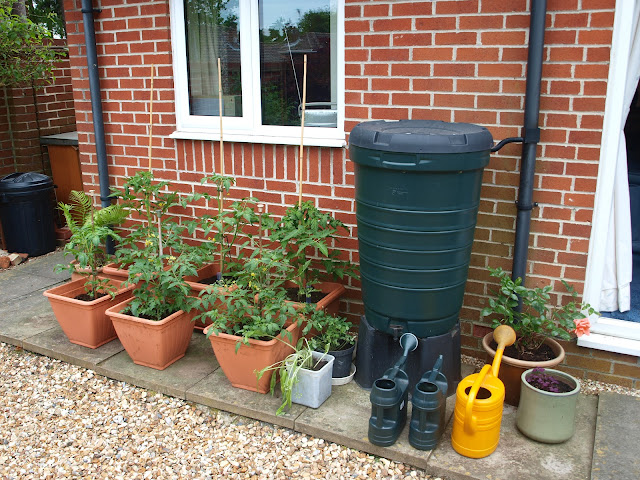 The grey pot at the right of this photo has in it an Oxalis "Burgundy Wine", which is just beginning to grow a new set of leaves after its long sleep. 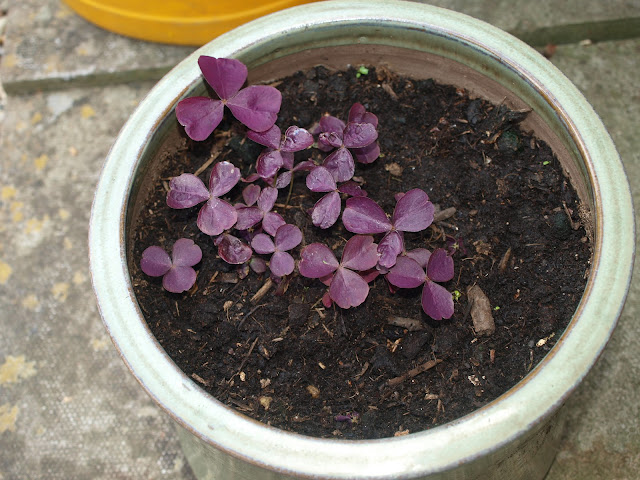 ﻿I had been planning to clear the patio so that we could make use of it over the long weekend, but the weather today is grim, and the forecast for the next few days is even worse, so the prospect of sitting outside is unappealing. I'll leave that task for another day.
Posted by Mark Willis at 17:30