I've been putting off the task of collecting up all the fallen leaves in my garden. It's not a job I enjoy, although I know that it needs to be done, and that the leaves will eventually provide me with some useful leaf-mould.

This past week Nature has done me a favour. We have experienced some very strong winds, and these have conveniently piled up all the fallen leaves for me in some great big mounds, which will make it a lot easier for me to scoop them up and put them in the leaf-mould bin. Of course I should perhaps mention that Nature has also toppled over some of my last remaining pot-plants as well as ripping off some of the smaller branches of my Philadelphus trees... 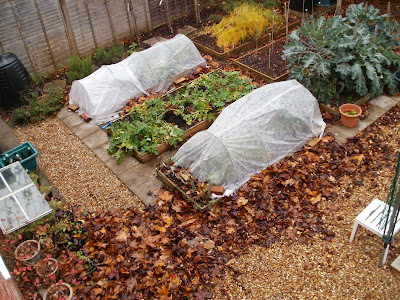 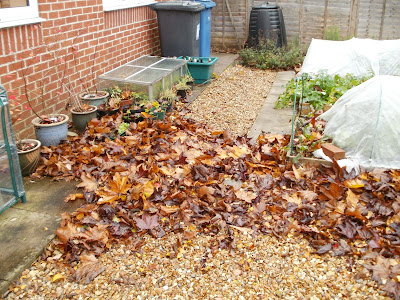 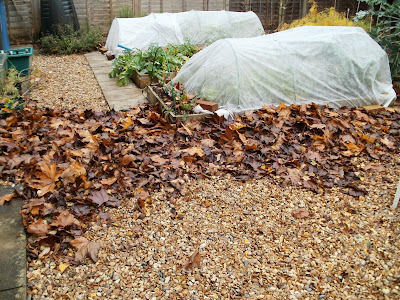 ﻿Best to get the job done early though, before the leaves go soggy, and before the weather turns cold. Collecting up frozen wet leaves would be the ultimate in unattractive gardening tasks. I do actually have an electric hand-held leaf blower / sucker machine, which I will put into action at some point, but I find that getting up the majority of the leaves is easier by hand. The collecting bag of the machine is quite small, and by the time I have automatically sucked-up a bagful, I can have manually collected three loads in my trusty trug-tub. I will use the machine later for "hoovering up" the smaller leaves, twigs and seeds from the maple tree which are hard to collect manually. I always have to be careful that I don't suck up the shingle as well - the leaf-sucker is quite powerful!
P.S. Got some of this done over the weekend, between the showers... (conscience salved.)
Posted by Mark Willis at 17:30