The weather in Fleet has been pretty mild for the time of year, so far, and I still have a fair few salad plants on the go. In fact, the endives are probably at their best right now. The ones I grew in the Summer didn't do very well. They mostly bolted before producing a worthwhile harvest. With the advent of cooler but not freezing weather the Autumn endives have really taken off. I also have a lot of lettuces still, of several different types. I have them underneath a layer of fleece now, so they will be OK for a couple more weeks at least.

On Saturday, having been away for several days during the week (and therefore pining for fresh veg, particularly salad) I harvested a few of the lettuces and another endive for our dinner. Here's a picture:


I had a close look at all the salads under their fleece covers, and found that many of them had a few brown, mouldy leaves -- perhaps a bit of botyritis-type mould. Nothing too serious, but just to be on the safe side I decided to give them an airing. I opened-up the fleece covers, removed the damaged leaves and left the plants exposed for a few hours. I hope this will have helped. 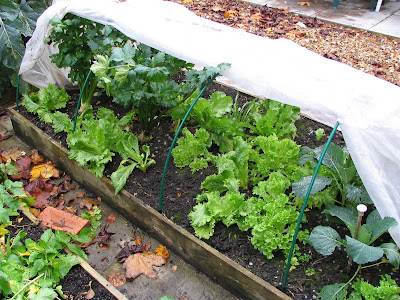 ﻿The Rossa di Verona chicories are coming on nicely. They won't be ready for a while yet (though we could already eat them as baby salad leaves, I suppose), but their colour is turning darker now. In due course they will form dense hearts.
BTW: I'm still hoping somebody will help me to conclusively identify the one on the right in the picture above -- the one with the long serrated leaves. Any ideas? (Any Italian readers out there, maybe?)
Posted by Mark Willis at 17:30