Over the last couple of weeks I have seen many Northern Hemisphere bloggers write about planting their garlic for next year. I'm not growing any myself -- mainly because I don't feel I can afford the space. We use so much garlic in our cooking that I would need to devote to this task about three of my six precious raised beds in order to have enough of the stuff!

I thought it might be fun to stimulate a bit of discussion about how we all prepare our garlic, and see who uses what gadgets for it. So here we go:

In our house we use a French-made garlic-crusher that I think is made out of cast aluminium. It was obviously built to last, because it was a wedding present, and we've been married 33 years! As such, it's almost certainly the longest-lived kitchen gadget we possess -- and probably the most frequently-used...
Attesting to its French origin, the word FRANCE appears prominently on one of the handles, which is very fitting, since Jane's maiden name was France! 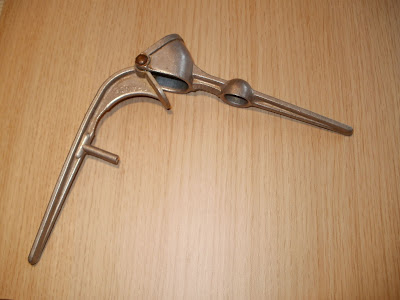 The way it works is - you put your peeled clove of garlic in the "bowl" of the device (actually it will hold 2 or 3 cloves), with the handles open, and then simply squeeze the handles together. The garlic flesh gets squashed out through a series of small holes. This means that you only get the nice bits, and the fibrous bits are left behind. 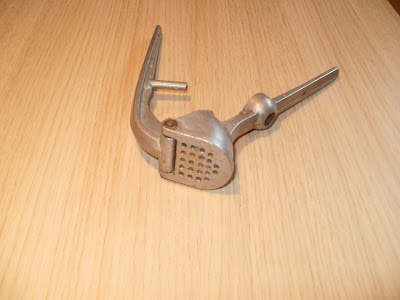 Maybe you noticed that the device also has a cherry-stoner arrangement in the handles. We've never used that bit. I suspect somehow that the cherries might end up with a bit of a taint of garlic...

The only down-side of the gadget is that it can be a bit fiddly to clean. It's normally best to rinse it out under the tap before the garlic residue has a chance to dry. I also find a cocktail-stick very handy for cleaning out the little holes.

If you have any garlic-related gadgets maybe you would like to write about them on your blog too? Or at least leave me a Comment telling me about it.
Posted by Mark Willis at 17:30