This is one vegetable that has more than its fair share of names -- the Christophene, aka Chayote, aka Cho-cho, aka Choko, etc, etc

A native of Central America - probably Mexico - it grows on a long trailing vine, somewhat like a Squash. In the right conditions, the vine can grow to more than 15m in length. It produces fruits that superficially resemble the pear. Here's some pictures:


These 'fruits' however are more of a vegetable than a fruit. They can be eaten raw, but they are more normally eaten as a cooked vegetable. When lightly stir-fried thay retain a slightly crunchy texture not unlike kohlrabi or young turnips. The flavour is mild., and savoury rather than sweet.  We like to eat them with oriental or "Caribbean" style meals. In the UK they are considered an "exotic" and are not widely available, but we normally get them from our Chinese supermarket (which is odd, since I associate the Christophene with Central America, not China!). A nice way to eat them is sliced thinly then stir-fried with some garlic, spring onions and diced chilli. They only need a couple of minutes' cooking.

Here's a size comparison between a Christophene and a real (Conference) pear: 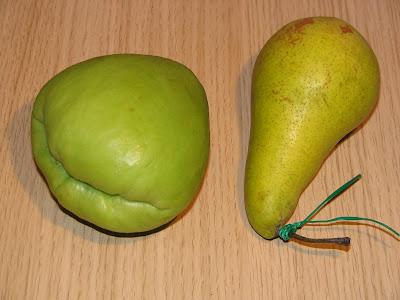 ﻿This is what they look like inside -- very much like a pear. They have one quite large seed which is easily removed. Little else is wasted. You don't need to peel them.
﻿

For me the biggest advantage of the Christophene is that it retains its texture well. Even when cooked it doesn't go sloppy, but it is never hard.﻿ When cooked properly, I would say that the texture is like a good New Potato. I like it! [Don't think I would ever be able to grow it though -- not warm enough in my part of the world.]

What would you serve them with? Well, the other day I made a spicy pork mince (with ginger, garlic and chilli) and I served it with rice, beansprouts and Christophene stir-fried with spring onion. The meal was garnished with some mango chutney. It was a good combination! Highly recommended.
Posted by Mark Willis at 17:30