In praise of Cucumber "Marketmore"

How many times have I written "I think this will be the last of the cucumbers..."?

Now I have picked another three.  None of them are particularly fine specimens, but when you consider that they have been growing outdoors completely unprotected, and that today is well into the second week of October, I think you will agree that they are not bad in the circumstances. 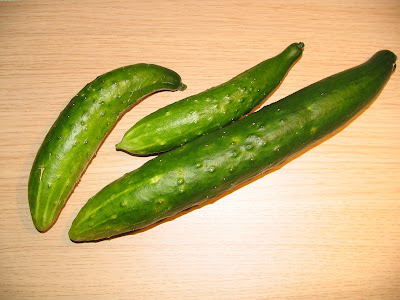 One fruit is a decent size - nearly 30cm - and the other two are each about 15cm. The latter are not really mature, but I thought I would pick them anyway because I suspect we will get the first frosts in the next few days. I know from experience that even immature cucumbers can be quite pleasant to eat. For one thing, the seeds will not yet have developed, and the seeds can sometimes be bitter. 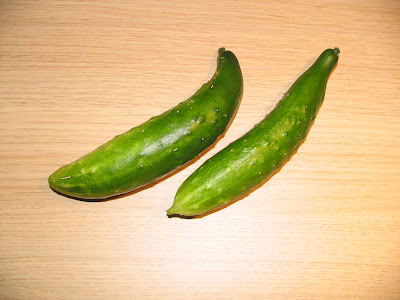 The cucumber plants themselves are looking very ragged indeed. I think they will have to come up.

But I say "Bravo" to them for having done a great job! I think between them the two plants have provided us with 15 cucumbers. From a personal perspective I also consider this a bit of an achievement -- getting a good crop from a very small space that could easily be deemed unsuitable for food production, so I'm being smug and patting myself on the back... I think a large part of the success of these plants must be due to the fact that they have had about half a metre of very well-matured home-made compost underneath them - this is a big aid to moisture-retention, and cucumbers like moisture. Also, the compost in that old bin was made from a wide variety of garden prunings, kitchen scraps and general debris over a period of about 3 years, so I imagine it contains a fair selection of nutrients.
Posted by Mark Willis at 07:00