Fiona is our second daughter. She is married to Juan Fernando Nunez (aka Juanfi), who is from Panama.  Here's picture of them on their wedding day earlier this year. Aren't they a lovely couple? 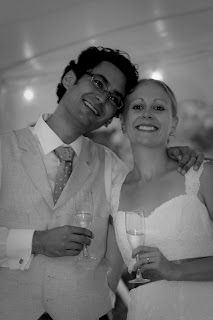 They live in Ferney-Voltaire (France) and they both work at the UN in Geneva (Switzerland -- a couple of miles away!). Couldn't resist putting in a picture of their cute new cat, Voltaire...

Fiona is an avid follower of my blog, and has written this article for me...


Gardening without a garden: balcony compost.
I’m thrilled to be writing a guest post for my Dad, all the way from Ferney-Voltaire on the French-Swiss border.  You can find me on Twitter as Feefielou.


As you’ll have gathered by now if you’ve been following the posts on Mark’s Veg Plot, my Dad has always been a strong advocate of passing on his passion for gardening down the generations.  At a very early age he allowed us (his daughters) to choose a plant each at the garden centre and take responsibility for looking after it in our own little plot in the garden (I made the unwise choice of woolly thyme, which was cute and fluffy but not much good either to eat or to look at!).  So ever since I first left home at 19 I’ve been eager to follow in his footsteps. The problem is, I’ve lived in 13 different homes in the past ten years and none of them has had a garden, so I’ve had to come to terms with gardening without a garden.
﻿﻿

There are a few gardening tasks you can manage no matter where you live.  A few potted herbs are almost always possible - although living in a flat with no window ledges and only north-facing windows posed a challenge, as I recall!  In this picture taken from the window of our apartment in Manhattan you can see some pots of basil, thyme and rosemary on the windowsill.﻿
Chillies also give a good return for the time and effort invested in them in a tiny space.  What may surprise you though is that I have found that composting is also often perfectly possible even if you don’t have a garden.  For one thing, I just feel wrong throwing all of that organic matter out in the rubbish which then gets taken to landfill.  Even living in downtown Manhattan I found that there was a service at the local farmers’ market where I could empty out my food scraps, knowing that I’d have no use for my own compost even if I’d been able to find a way to make it at home.
﻿
I now live in a fourth floor flat with no garden, but a huge balcony. Composting on a balcony initially seems like a bad idea.  With neighbours in close proximity, trying to enjoy their balconies too, the thought of bad smells and clouds of flies might make you think twice about composting.  But well-maintained compost doesn’t smell bad, and a lid keeps the tiny fruit flies at bay.  I used a website called balconycompost.com for advice, and made my own small composter that doesn’t take up too much of our precious outdoor space.
I started with two plastic rubbish bins with lids, which I got for a few francs at Ikea.  It’s important to have two, because unlike in a conventional garden you have nowhere for all of the liquid to drain away to - so one bin is the compost receptacle, and it stacks inside the other which acts as the juice collector.  Both for this draining, and to allow oxygen to get at the lower layers in your compost bin, you then need to make some holes in your inner bin.  We used a drill to make maybe 15-20 holes in the bottom and lower sides of the bin.

Following the advice on balconycompost.com, I started off with a layer of shredded paper.  But I’ve never seen my Dad adding paper to his compost and I trust his judgment, so I’ve not been as careful with balancing the ‘greens’ and browns’ (wetter things like vegetable peelings vs. dry stuff such as paper, wood etc.) as conventional wisdom deems necessary.  I do occasionally add the gunk from the vacuum cleaner, and when the compost seems to be particularly soggy I’ll shred up a brown paper bag or a newspaper from the recycling box to help dry it out a bit.  I think the fact that it can’t drain into the soil underneath like a garden composter makes it more prone to sogginess.

We add all our vegetable and fruit peelings and unused leftovers, eggshells, coffee grounds, bits I’ve pruned off my plants, dead flower arrangements, and … ahem… toenail clippings (yes, really) to our compost,  and between two of us we managed to get it completely full in just a matter of weeks.  The magic of making compost, though, is that it continually shrinks as it decomposes so that it’s now in a permanent state of ‘almost full’.  You shouldn’t put meat or dairy products in your compost, and following my Dad’s advice I’ve stopped adding teabags because they seem to take ages to decompose.

In terms of maintenance, the lack of worms on a balcony makes aeration all the more important, since this is something worms normally help you out with (I do have a few, which have presumably been dropped by passing birds, but nowhere near as many as on those horrendous pictures my Dad posted last week!).  You should get a trowel or spade in there and mush everything around a couple of times a week, as the aeration stops the kind of anaerobic rotting that makes it smell like silage and might cause your neighbours to complain to the council or send you anonymous hate mail.  It’s worth checking every now and again that the holes aren’t blocked, which you can do by poking a long bamboo ‘satay’ stick into them.  The only other maintenance task is to periodically check the outer bin for liquid and empty it out so that the compost is not sitting in water.  Don’t throw that liquid away! It’s as good as any liquid fertilizer in my opinion, so I pour it
straight out into my geraniums or whatever else needs a boost.

Having started to compost in the early summer, we had some useable, if not perfectly smooth, compost by late September!  If you care about keeping your balcony clean, you’ll need to lay out a tarpaulin in order to retrieve your useable compost - thankfully our local garden centre was giving them away to their loyalty card customers.  Turn your compost bin out into the outer bin that has no holes.  The stuff at the top will then be the oldest, most decomposed compost.  Scoop that off the top and use it wherever you see fit, mixing it in with your shop-bought compost or potting soil, then turn the rest back out into the original bin.

It’s as simple as that!  It saves you money on bagged compost and fertiliser (which you are likely to need a lot of with balcony gardening since everything has to grow in pots), and it reduces the amount of waste you send to landfill, all while taking up only a small space on your balcony.  And what's more, my neighbours still appear to like me!

Finally, here's a picture of my niece Lara watering the courgettes on my balcony during a recent visit. The love of gardening obviously runs in the family!