I had been intending to leave my Borlotto beans on the plants until the pods had dried and gone brown, but I changed my mind. I have seen so many lovely pictures of Borlotti on other peoples' blogs just recently that I couldn't resist the tempatation to set up my own little photo-shoot. After all, the pods will dry just as well in the bottom of the airing-cupboard!

Anyway, here are some of the photos I took... They don't really need captions. These beans have to be THE most photogenic of all veg, don't they? 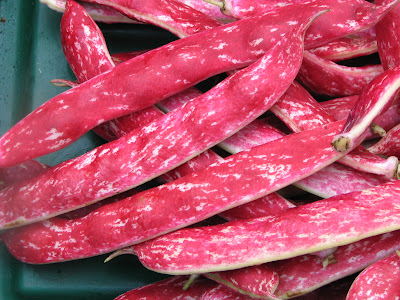 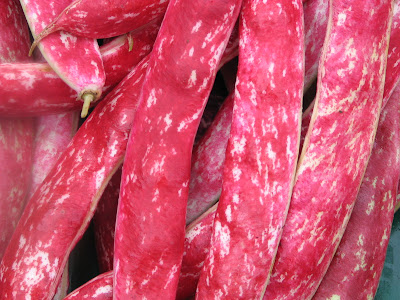 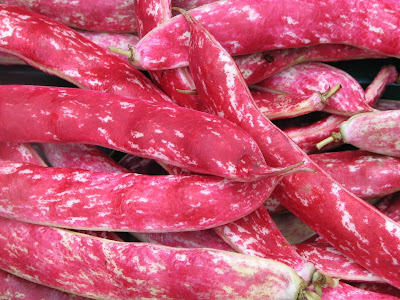 ﻿
﻿
﻿
﻿ ﻿ ﻿
I also thought about using the beans fresh or "green", like flageolets, but I decided against this. I want to dry them and keep them for later. What I picked today represents about half of my total crop of these beans. I left on the plant those pods that looked fairly green still, or quite thin. Hopefully they will be able to put on a bit more weight and colour-up some more before the advent of frost kills off the plants.

For the record, these beans are a variety called Lingua di Fuoco (Firetongue). The seeds were from Thompson & Morgan. I think I eventually had about 6 plants. I say "I think" because in all honesty my Borlotti were sown with a degree of desperation. I had had a lot of trouble with Vine Weevil larvae, which killed off most of the earlier sownings of all the beans - runners, climbing French beans Cobra, Italian Gold, and Borlotto. I then went through a stage during which I sowed loads more bean seeds of every type, sticking in about three times as many as I really needed, in the hope that some would survive! And in due course, once the Vine Weevils had eaten their fill, I was left with a goodly (and unknown) quantity of bean plants growing up the poles, all inter-twined. Next year I will be more ruthless and systematic with the use of nematodes to kill off those darned weevils...