I have a potted fern in my garden that I have grown from a volunteer seedling that just appeared one day a few years ago -- presumably brought in as a seed by the birds. I have had it growing in a blue/grey glazed pot in which it looks quite nice (in the Summer time that is, when the foliage is fresh and green). This year I have had it arranged in amongst my herbs and lavender at a corner of my patio, adding a bit of different texture to the arrangement. Right now though it looks unsurprisingly "tired". 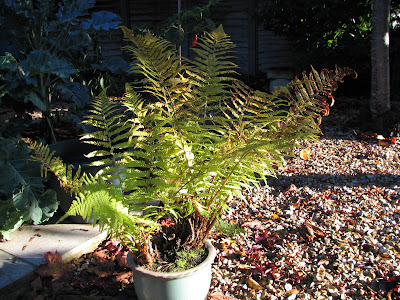 The fern had developed into two distinct parts, so I recently decided to divide it and re-pot both parts separately. Dividing a plant like this is desirable for two reasons: firstly it allows you to double your stock, for free; and secondly it allows you to ensure that the original plant doesn't get too overcrowded in its pot. I'm no great expert on ferns, but I have made the assumption that a good time to do this task is at a point when the plant is beginning to enter a period of dormancy, and before conditions get too cold.

So, I eased the plant out of the pot (well, actually "wrestled" would be more accurate), at which point it looked like this:


I then divided it carefully down the middle with an old kitchen knife that I use as a gardening implement. I tried using a spade, but this didn't work -- the fern's rootball was too springy, and the spade just bounced off! After the division, I trimmed off about half of the roots of each piece.


After this it was just a matter of re-potting the two bits. I put the smaller one back into the original pot, and found a larger terracotta one for the bigger plant, so that it has some room to expand. I trimmed off most of the fronds to reduce the opportunities for slugs and suchlike to overwinter amongst any decaying vegetation.


I'm going to keep both plants under the cover of one of my mini greenhouses over the Winter, to give them some extra help with recovering from their "Op".


By the way, are there any fern experts out there who can conclusively identify this type of fern for me?
Posted by Mark Willis at 17:30