On 11 October I described my method of blanching Endives to make them less bitter. Remember this?


Well, yesterday (28 October) I harvested the two Endives in that picture. The one under the bucket was not very good: several of the outer leaves had gone brown and slimy (probably got too cold during the frosty nights last week, since they would have been in contact with the plastic). I was able to rescue the heart of the Endive though, so all was not lost. The one tied with string was much more successful; in fact it was exactly what I had been hoping for. This is what it looked like when I untied the string:


Here they are both together, on the kitchen worktop, awaiting preparation. (The best one is on the right of the photo). They are destined to be used as part of a French-inspired meal featuring Gratin Dauphinoise, Celeriac Remoulade, Salade aux Lardons and Saucission Sec...(and probably a bottle of "our own" Cotes De Duras wine). 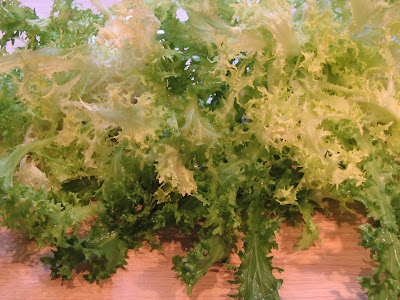 By the way, this fine loaf (home-made by Jane) made with Spelt flour is also going to feature in the meal mentioned above, perhaps with the addition of some nice unsalted butter...


They could be harvested now if necessary. I have not used any artificial methods for blanching them, since the hearts tend to go quite pale of their own accord.
Posted by Mark Willis at 17:30