When we moved into this property of ours, in 1991, we brought a potted Bay tree from our previous house, and I planted it in one of the borders. It has grown into a huge bush / tree, and we use leaves from it very frequently in our cooking - particularly for flavouring stock and casseroles. Soon after we moved here I took some cuttings from this tree and I have grown them into a pair of standard-trained ornamental trees, clipped into a rough "lollipop" shape. 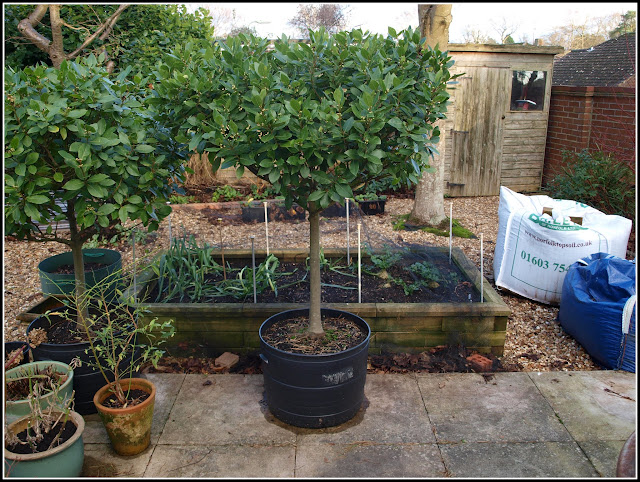 The two standards will not last for ever though, and since Bay trees grow very slowly I decided in 2013 to start another pair, so I took two more cuttings. Unfortunately only one of them "took". Here it is in June 2014. 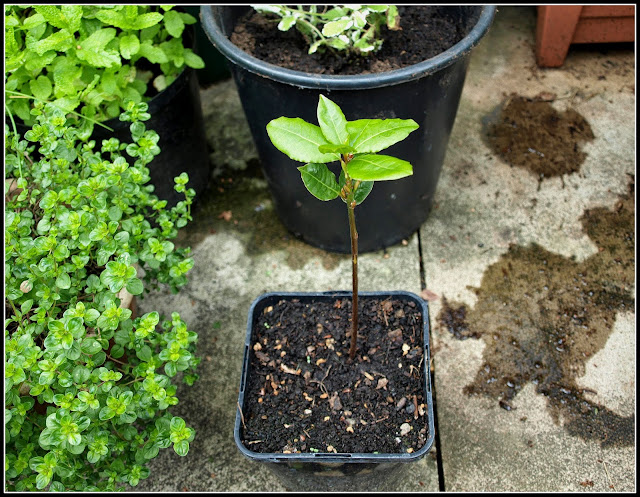 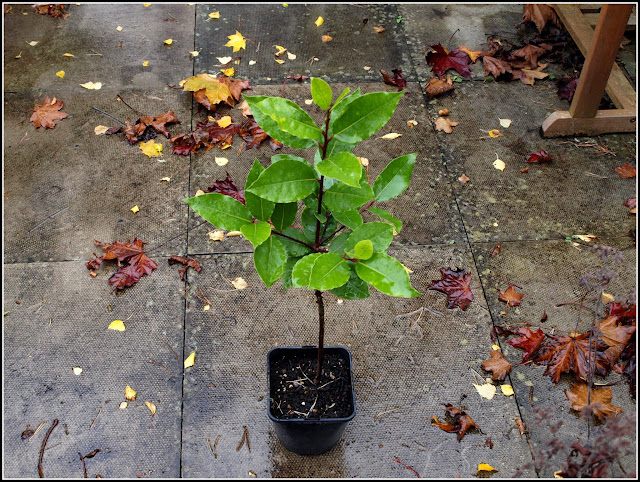 And you can see it again here in a photo taken just a few days ago. 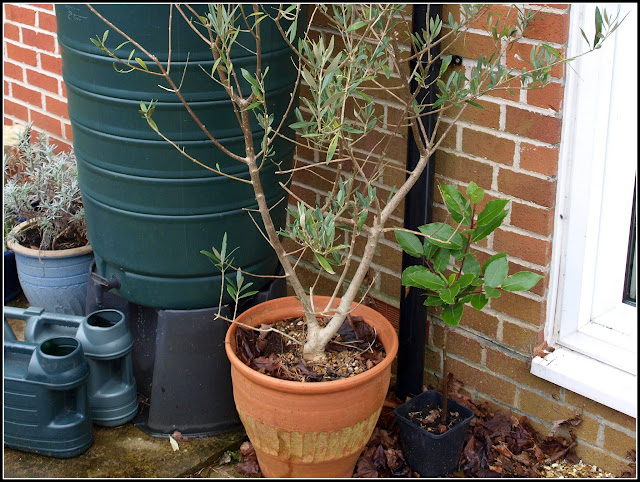 Just recently I noticed that the big "Granddaddy" Bay tree had put up a few basal suckers. These are the best material for taking cuttings, so I thought I would demonstrate here the procedure I use for this.

Here are the suckers coming up out of the soil at the base of the mature tree: 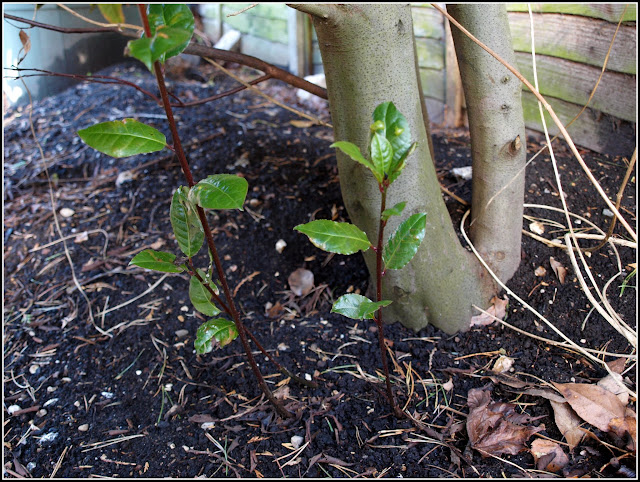 There were 3 of them, but I decided I would only cut 2. 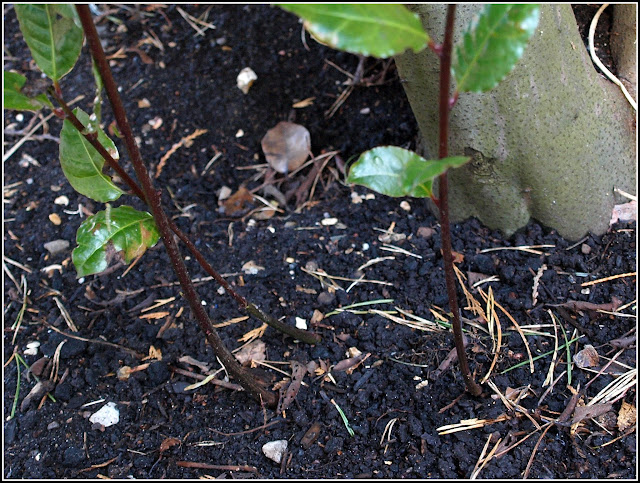 They both had a very pronounced curve. 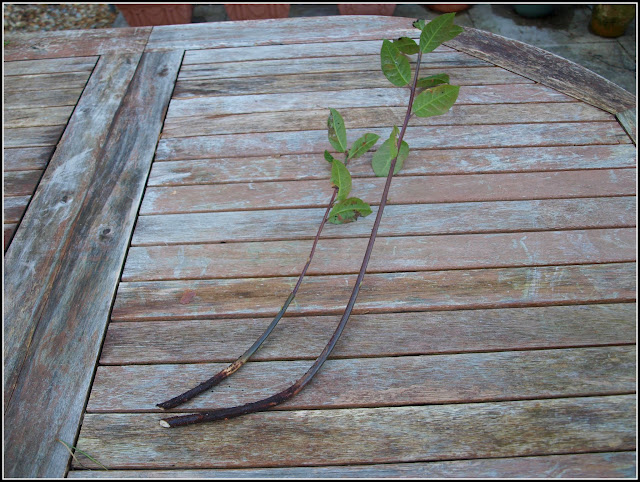 I cut off a couple of inches of the base to straighten them, but not too much, because the part of the cutting that was underground is the bit most likely to root. Then I dipped each cutting in some Hormone Rooting Powder, which will (allegedly) help it to produce roots. 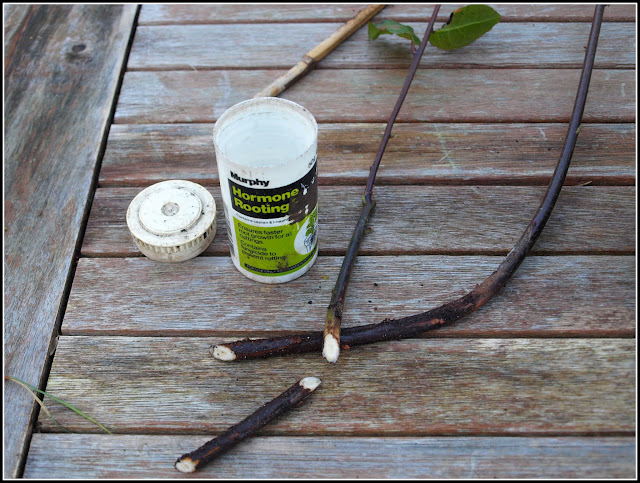 Then I stuck each one in a pot of moist garden soil to which I had added a about 10% gravel, which will assist with drainage. 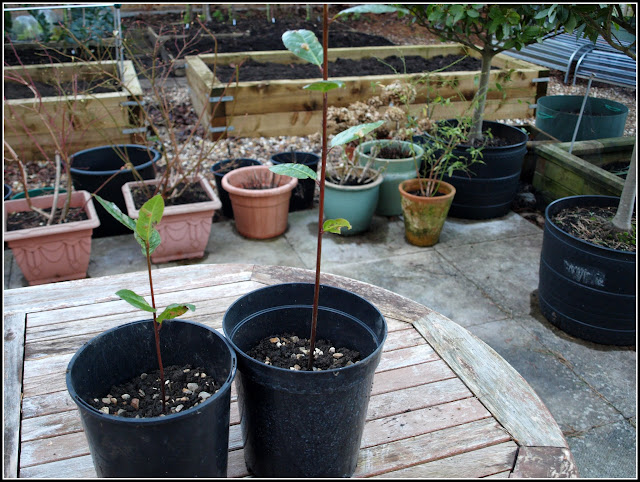 These pots are now sitting on a potting-bench in the garage, near the window, where it is warmer than being outside (by a long way!), but still relatively cool. There is now nothing much else I can do apart from wait and see whether they "take". It will be several weeks before I know, but if/when I see some new leaves forming at their tips I will know that I have been successful. And in about 10 years time I may have two more standard Bay trees!

P.S. Thanks to everyone who offered advice about the care of Fig and Olive trees. Much appreciated!
Posted by Mark Willis at 12:00