I have put the word "Iranian" in inverted commas in the title of my post, because I want to make it quite clear that I have no claim whatever to any expertise in relation to Iranian cooking! I have read a few recipes and seen some stuff about Iranian cooking on TV and the social media, but I don't think I have ever had or prepared any authentic Iranian food. Still, a little matter like that is not going to put me off making something that I perceive as Iranian in style!

I made this meal that I am going to describe on the day when Jane was attending a Middle Eastern cookery course at the Waitrose Cookery School in London - asking for trouble, I suppose!

Well, this is where I started. I had a rummage in the kitchen cupboards and fridge to see what ingredients we had that might be thought of as Iranian - or at least vaguely Middle Eastern. I found quite a lot: 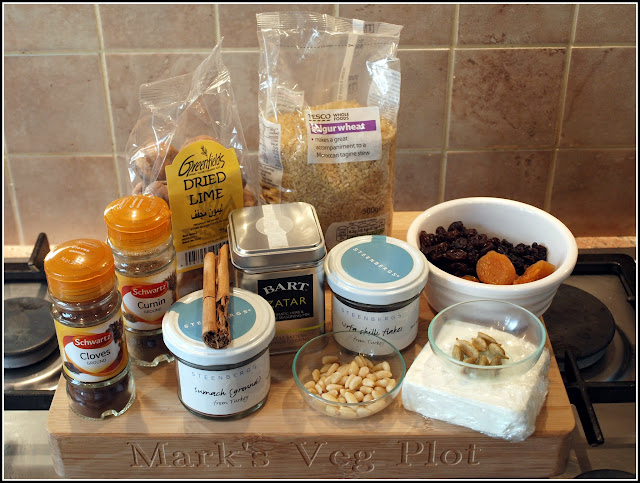 Bulgur wheat, dried apricots, raisins and currants, Za'atar, Turkish Urfa chilli flakes, Cardamom pods, Pine-nuts, Sumac powder, Cloves, Cumin and Cinnamon, a piece of Feta cheese, and (pièce de résistance!) a packet of dried Limes. I should also mention that I had a 300g pack of diced Lamb Shoulder waiting in the fridge, and some fresh Parsley available in the garden.

I have never cooked with dried Limes before, and never knowingly eaten them, but my culinary hero Yotam Ottolenghi is a big fan of them, so they must be OK. If you are unfamiliar with this ingredient, have a look at this LINK. 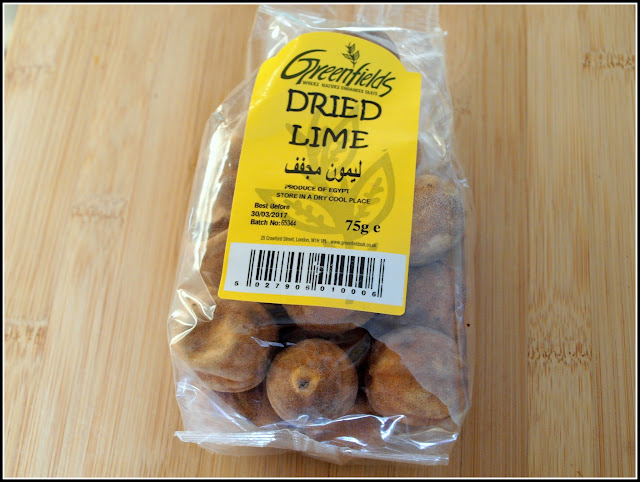 The dish I made was in effect a "Lamb Casserole" with Middle Eastern spicing. I deliberately chose what I consider to be sweet spices (Cloves, Cinnamon etc) and I didn't use any of the West Indian ones like Nutmeg, Mace and Allspice. I used about a quarter teaspoon each of Cumin, Cinnamon and Cloves, a half teaspoon of Chilli flakes and Za'atar, plus about a teaspoon of Sumac. 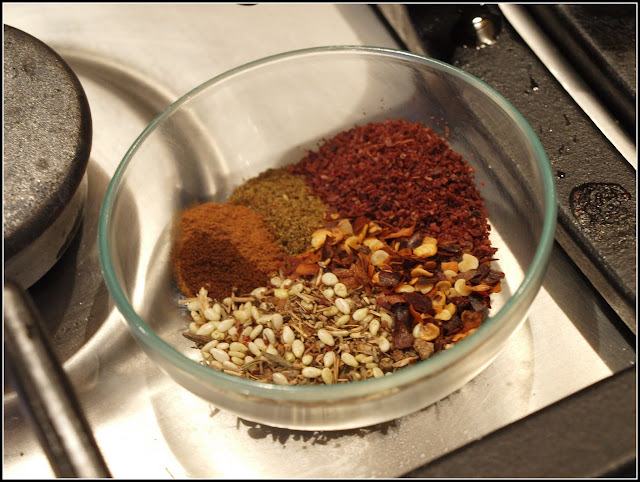 The Sumac is the red spice (top right in that bowl). I think it has a sort of lemony flavour. Certainly not hot like chilli.

After browning the meat and softening a chopped onion I added-in the spice mix and the dried fruit, along with a tablespoon of concentrated beef stock and about 500ml of water. It was at this stage too that I added the dried Limes. I only used two because I had read that they are quite strong and I didn't want to overdo it. Opinions vary about whether you should pre-soak them, but I didn't. I did however pierce them a few times with the point of a knife, both to let the flavour come out and also to help them sink into the gravy! 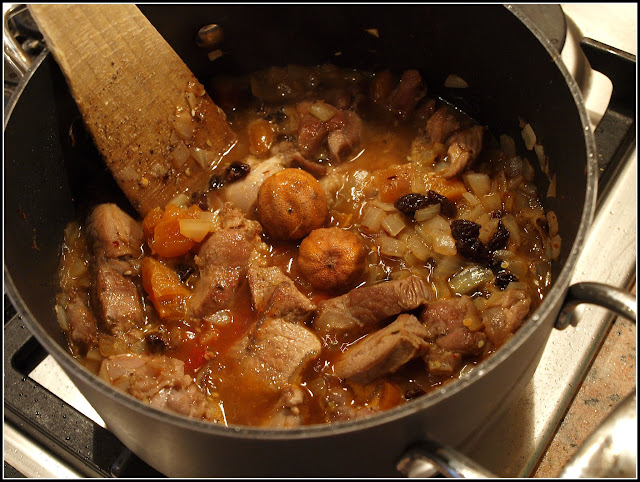 I brought the liquid up to the boil on the hob, then covered the casserole-dish and put it into a low oven (140C) for 3 hours or so. This long slow method of cooking is perfect for this type of dish because it gives plenty of opportunity for the spices to permeate the meat. This is what it looked like after the three hours: 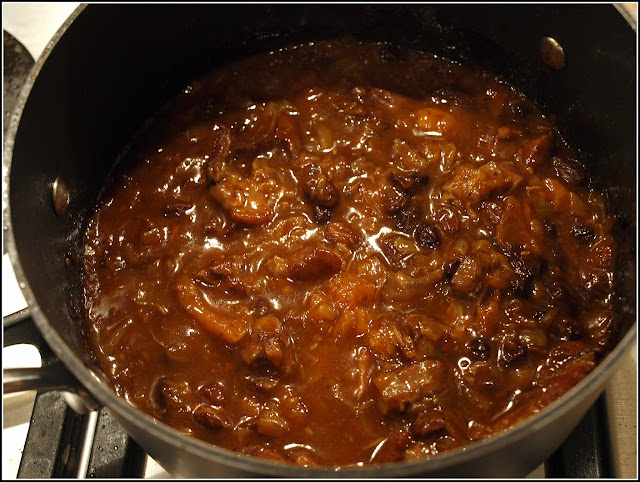 To accompany the lamb I cooked about 120g of bulgur in 400ml of home-made chicken stock, simmering it gently for about 20 minutes and then turning off the heat to let the grain fully absorb the stock without going dry. I also toasted some pine-nuts which were eventually added to the bulgur to give it a bit of crunch. The final touch for this dish was some chopped Mint and Parsley, stirred in at the last minute to maximise its flavour. 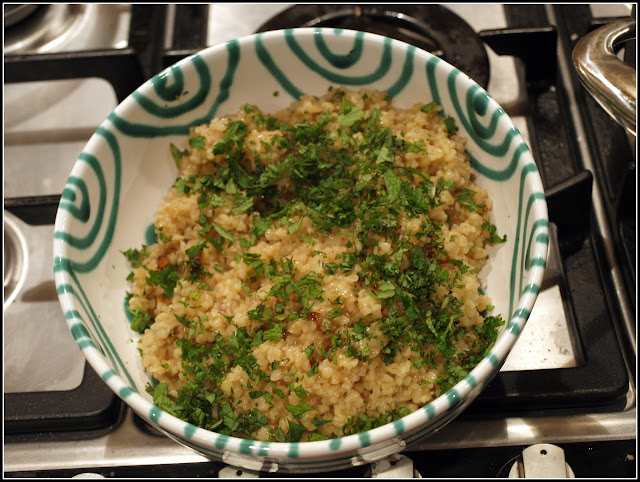 The Feta cheese was crumbled on top of the lamb: 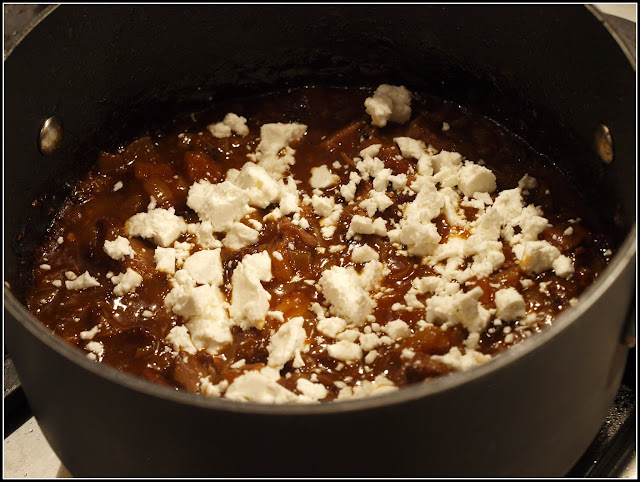 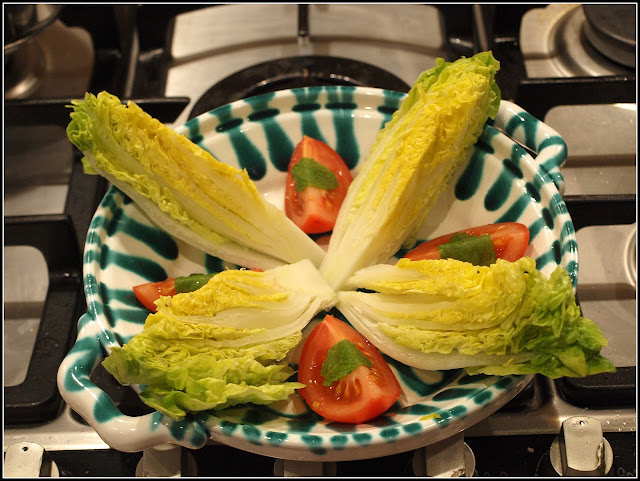 Here is the complete dish, all assembled: 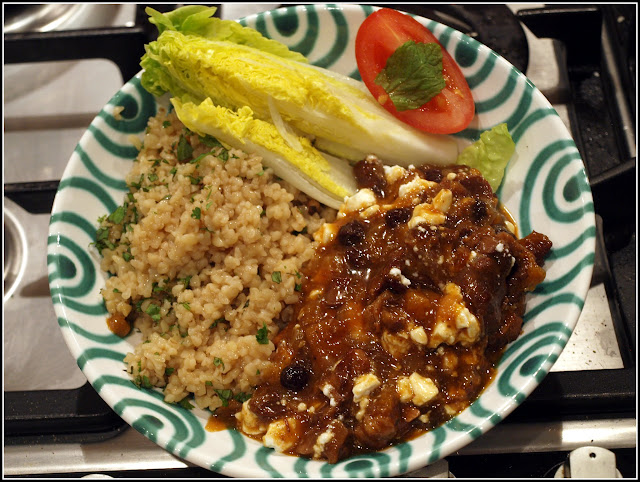 The lamb element doesn't look very special, but it certainly tasted special. To be honest, I don't think I could specifically detect the presence of the dried Lime, or indeed the Sumac or any other individual spice. The whole thing had a pleasantly sweet, spicy, almost oriental, note to it. Bearing in mind that this type of dish originates in the Middle East, I can see how with the addition of a load more chillis this could evolve into what we now call an Indian curry. I'm guessing that before the advent of the chilli (imported from South America in the 16th century, if I'm not mistaken), some of the food of Western parts of India might have been somewhat akin to this....

My thanks to friends on Twitter for advice on the use of dried Limes!
Posted by Mark Willis at 12:00